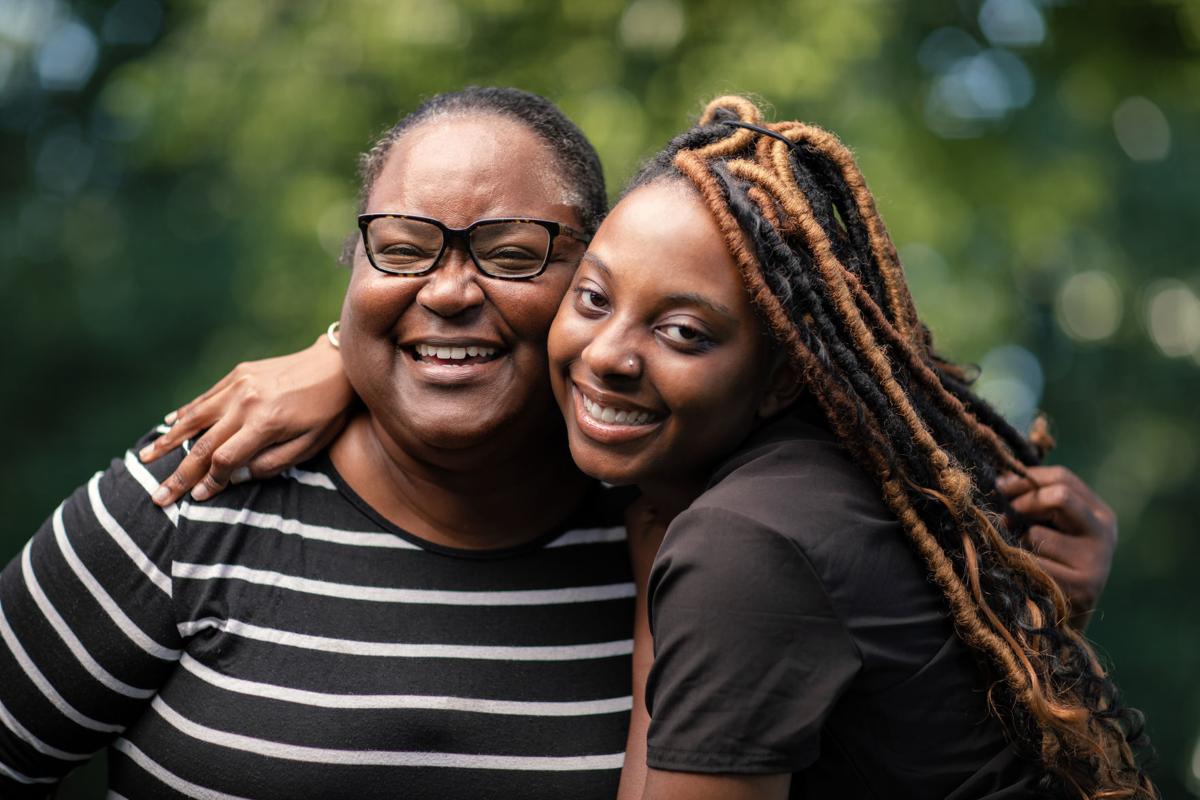 Shianne Mays (right) moved in with Vanessa Quick — “Miss Vanessa” to Shianne — when she was a sophomore. Quick bought Shianne a car for Christmas because she knew she needed wheels for college. 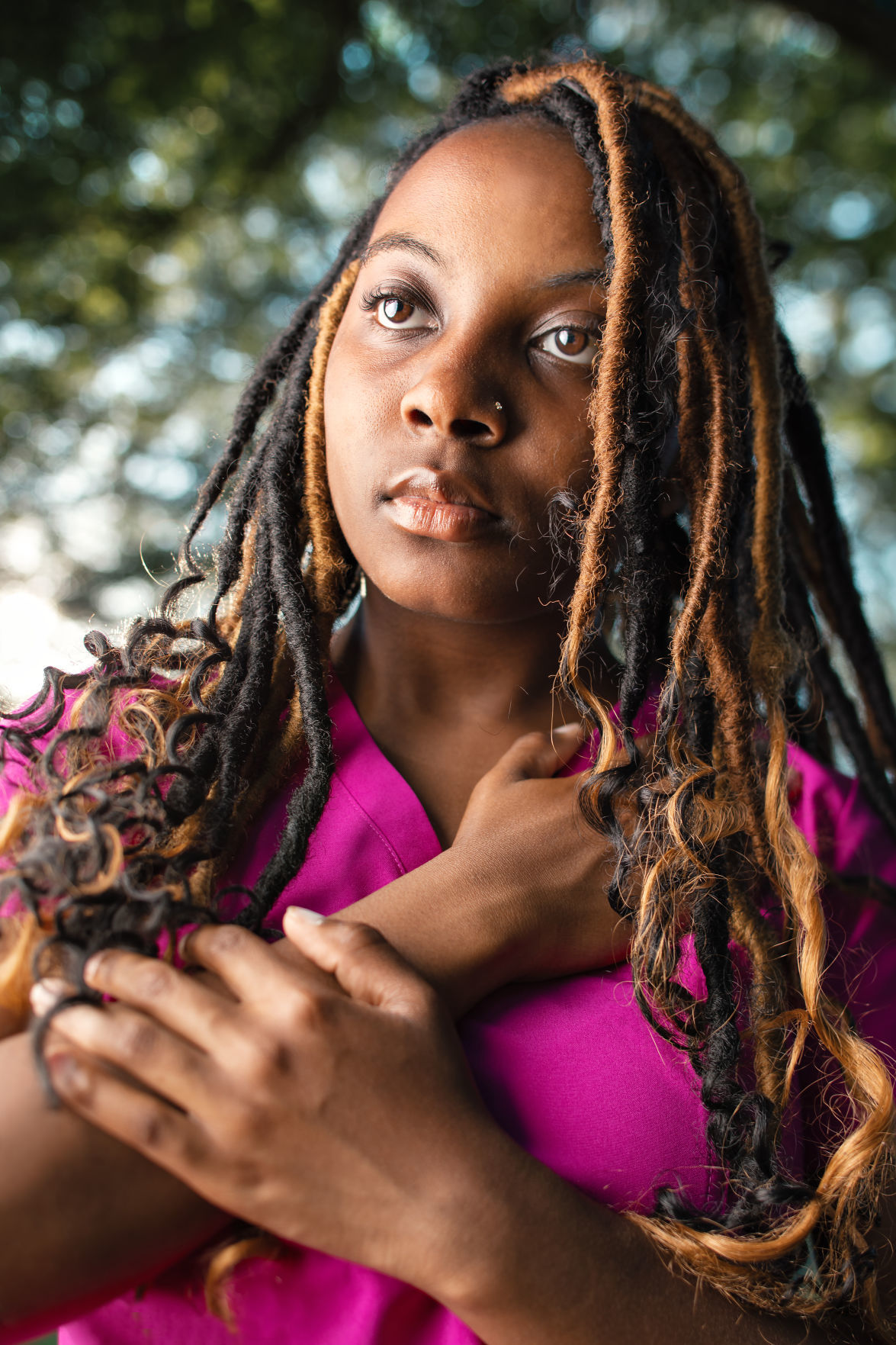 Shianne Mays will enroll in Winston-Salem State this fall to study nursing.

Shianne Mays (right) moved in with Vanessa Quick — “Miss Vanessa” to Shianne — when she was a sophomore. Quick bought Shianne a car for Christmas because she knew she needed wheels for college.

Shianne Mays will enroll in Winston-Salem State this fall to study nursing.

Shianne Mays made it.

She graduated from Andrews High this month, and next fall, she’ll enroll in Winston-Salem State and pursue a profession she’s thought about since eighth grade.

She wants to become a nurse and help people like she’s been helped. And the person who helped her when she needed it the most was a woman she barely knew.

Two years ago, Quick took Shianne in after the sudden death of her mom. They had met through Shianne’s friend at the time, and they had only met twice. Shianne has lived with Quick ever since.

It all begs the question.

“God, I guess,” Quick says. “She needed help, and I did what my heart said to do. That is how I was raised. My grandmother raised me that way. When people need help, you help them. That’s how it’s supposed to be.”

To understand the significance of what Quick did, you have to understand Shianne and her life.

She and her mom, Yvonne Leak, were close. They had each other and really no one else. Her brother, 10 years her senior, had left. Her dad wasn’t in her life. Her mom was.

Leak had Shianne after dealing with the heartache of two miscarriages. She called her daughter “Shi” or “Sha-Sha.”

When Shianne was 7, her mom gave her a necklace with the word “Friend.” Shianne would wear it at Montlieu and Northwood elementary schools so her classmates could see.

They’d often pack a lunch of peanut butter and jelly sandwiches or baloney and cheese sandwiches and head to City Lake Park for a picnic. They would talk, and Shianne would play on the playground and ride the carousel.

“Those were the best days of my life,” Shianne says today. “Some people don’t have either one of their parents, so I felt very fortunate. Even if I didn’t have both, I had one.”

Shianne’s mom worked a series of hourly jobs, from fast food to factory. By early 2018, she was unemployed, and a friend she and Shianne were living with told her they had to leave.

And they had no place to go.

They ended up moving to the emergency family shelter at the YWCA of Greensboro.

At the time, Shianne was a sophomore at Andrews. To get to school from the shelter, she had to get up at 6 every weekday morning and catch four city buses to make it to school on time at 8:45 a.m.

That was Shianne’s academic life for a month.

Then came that fateful weekend in March 2018.

It was early Sunday, a few hours before daybreak. Shianne and her mom were sleeping in single beds 6 feet away from one another at the YWCA shelter when Shianne awoke to her mom crying and having a hard time breathing.

“Mom,” Shianne asked. “Are you alright?”

“Shianne, go wake up the lady working the late shift,” she told her. “Tell her to call an ambulance.”

Right away, Shianne knew it was serious. Her mom always called her “Shi” or “Sha-Sha,” never “Shianne” unless it was important.

After delivering the message, Shianne sat at her mom’s bedside.

“Does it hurt really bad?” she asked.

The ambulance came. Shianne and her mom went to the hospital, and Shianne stayed in the waiting room for hours. Finally, a doctor came to see her. She still remembers what he said.

“Those words will forever be in my mind,” Shianne says today. “I kept thinking, ‘I was just talking to her yesterday, and she seemed fine.’ Then, a few hours later, she tells me, ‘It hurts.’ It broke my heart. I was like, ‘This can’t be real.’”

Yvonne “Raquel” Leak died of a heart attack. She was 47.

Shianne was 15 at the time, and she felt alone. Her maternal grandmother lived in Maryland, and she knew no one locally she felt she could call and depend on. The first person she thought of was Quick.

Quick jumped in her car, drove to Greensboro and picked up Shianne.

It was the third time they had met.

Back at Quick’s house in High Point, Shianne struggled with the news. She was still in shock. Then, reality hit. She was homeless. So, she turned to Quick.

“I don’t want to go into foster care,” she told Quick that first night at the house. “Can I stay with you? I’m in school. I’ve never been a bad kid, and I don’t do anything bad. You don’t have to worry about anything.”

Shianne found stability. She also found someone she saw as a savior.

“She’s beyond an angel,” Shianne says of Quick. “Honestly, we didn’t know each other that well when everything happened that morning. She didn’t have to do that. And she didn’t take me in to get money or benefits. She did this out of her own good will.”

Shianne continued making good grades, and by her senior year, she started taking classes at GTCC to get some of her general-education courses out of the way before going to Winston-Salem State.

But her life expanded beyond the classroom.

She played volleyball her junior year, and she became a varsity cheerleader her senior year. She also received her certified nursing assistant certification, and she began working part-time at Shipman Family Home Care in High Point.

Then, at Christmas, she received an unexpected gift.

Quick told Shianne she had a family emergency. They drove 45 minutes south to Seagrove. They stopped at a gas station where they met Quick’s nephew, his wife and their children. At the gas station was a 2010 white Toyota Corolla.

“Whose car is that?” Shianne asked.

Quick pulled out a set of keys and began to sing.

“On the 12th Day of Christmas, my godmother gave to me.”

Quick handed the keys to Shianne. It was her car. Shianne cried.

When her children were growing up, Quick had pulled those same kinds of Christmas surprises on them. She wanted to do the same for Shianne.

“She had been doing everything she was supposed to be doing and not running around on the street,” Quick says. “She needs to grow, and I knew this (the car) would help her grow.”

Again, the question why. For Quick, it goes back to her grandmother, the woman who raised her. She died in 2016. Two years later, Quick took Shianne in.

“Shianne thinks I helped her, but she helped me,” Quick says. “I didn’t know what I was going to do after my grandmother elevated, and to see a 15-year-old girl being so strong, that let me know I could be strong, too.”

Shianne will attend Winston-Salem State with a new car — and a new goal. She is going to college for her mom.

“I’m living for her,” Shianne says. “She always wanted to go to college, and she couldn’t because she had me and my brother. So, I’m doing this for her. I want to make her proud.”

“She is a strong young lady,” Quick says. “She’s definitely on the right path.”

When Shianne thinks about what she’s been through and where’s she’s going, she thinks of her favorite quote from hip-hop legend Tupac Shakur: “Forgive but don’t forget … girl keep your head up.”

“I can never forget what happened to me, and it will never go away,” she says. “Those are the things that will stick in my brain. But I know I have to keep moving, and I can’t let things get me down or destroy me. I can’t stop now. I’m just getting started.”

Jeri Rowe, a former columnist at the News & Record, is the senior writer at High Point University. He interviewed Jose Luviano-Mondragon as part of a project for Guilford County Schools.