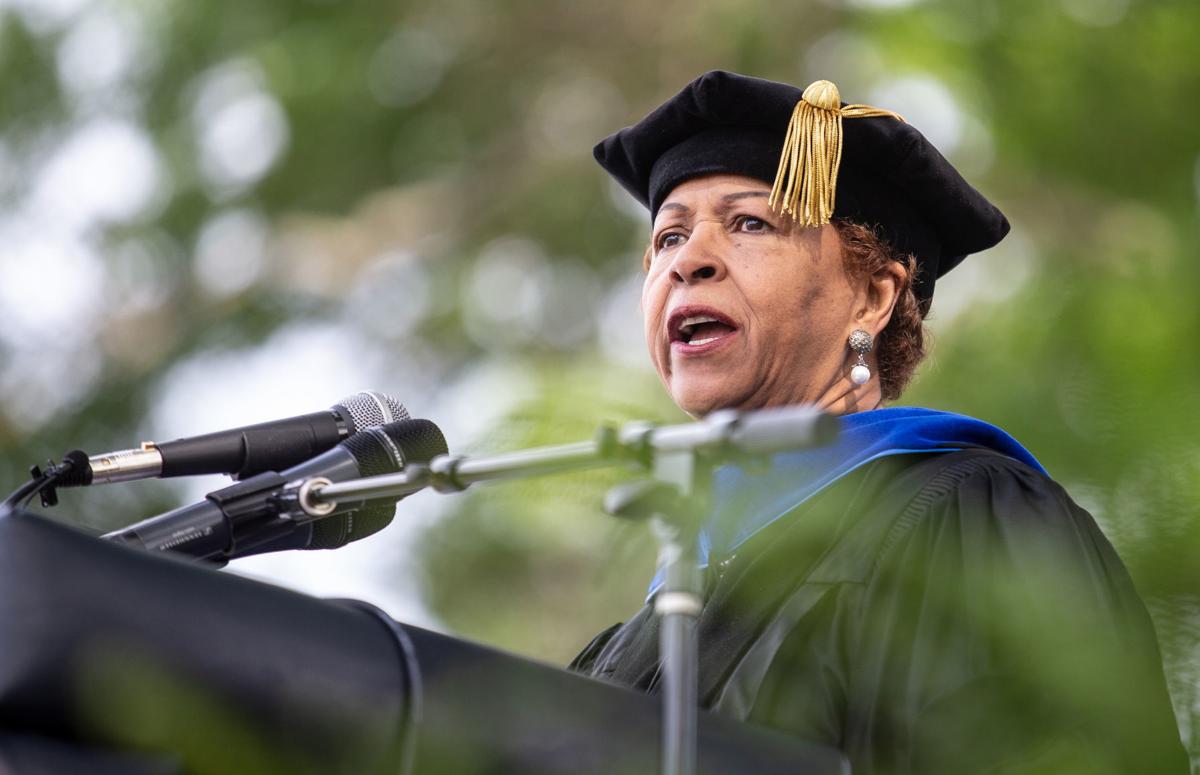 Bennett College President Phyllis Worthy Dawkins speaks during commencement ceremonies on campus on May 4. On June 21, Bennett announced that Dawkins had departed the college. 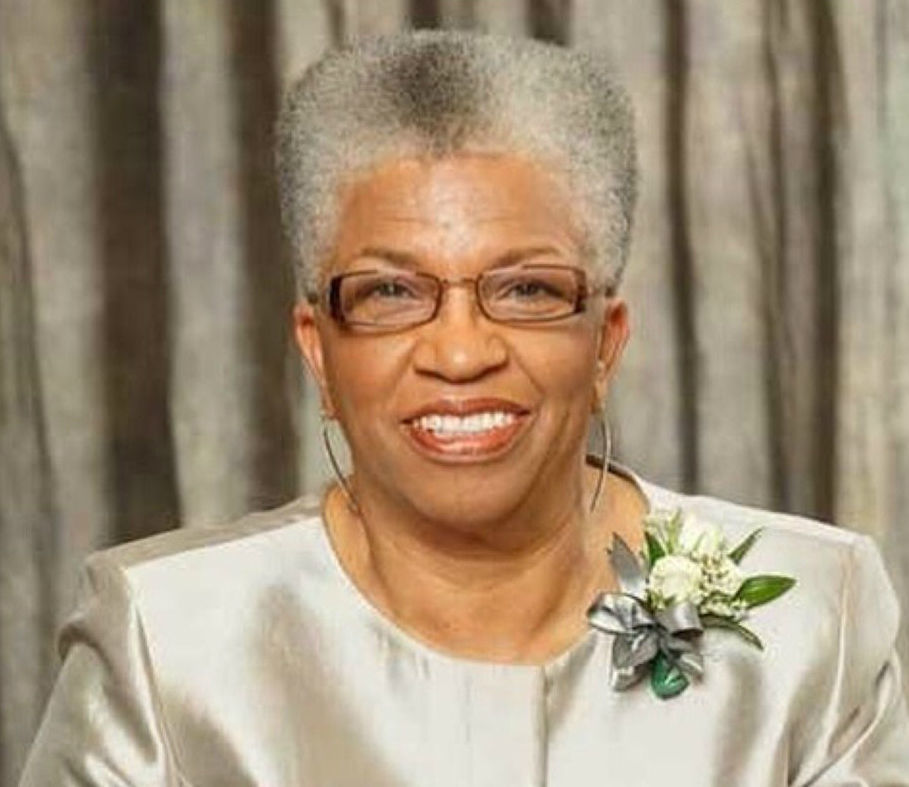 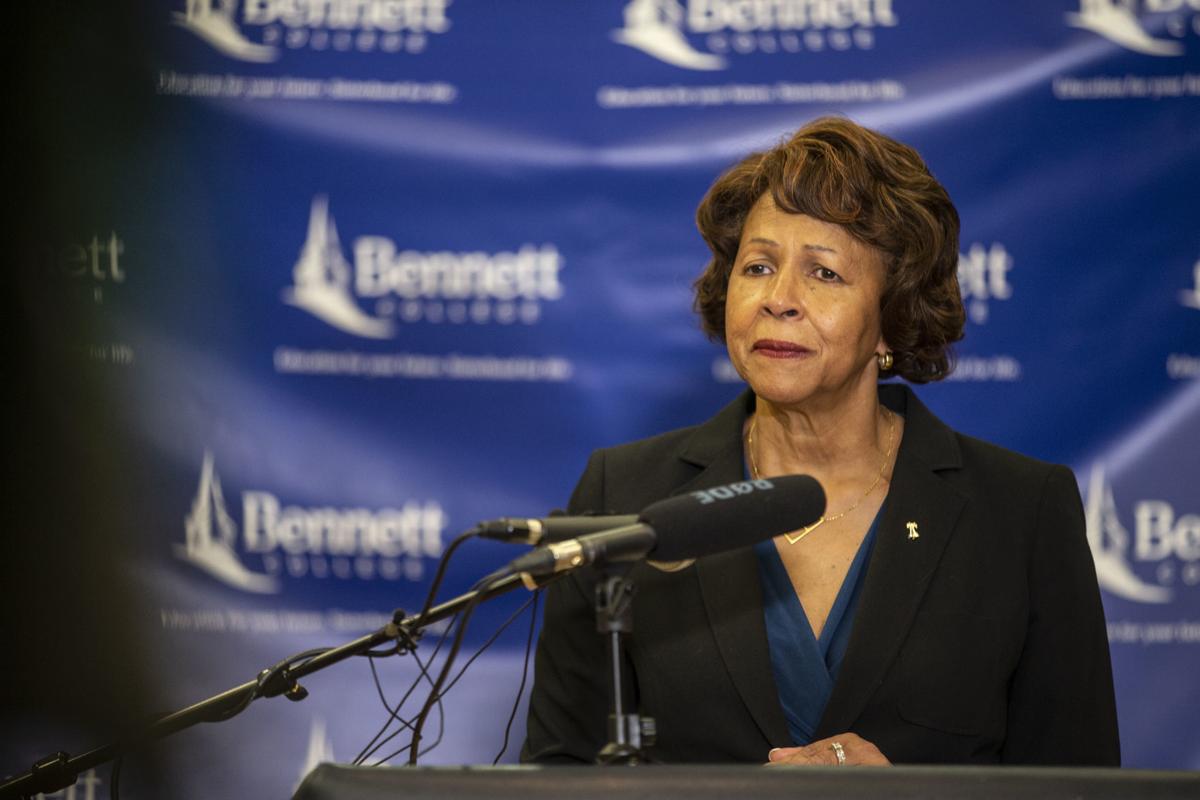 The college late Friday announced the departure of Dawkins, who was hired as provost in 2015 before becoming interim president in 2016 and permanent president a year later.

It’s unclear if Dawkins resigned, was fired or was asked to step down.

A news release gave no reason for her sudden departure and said only that Dawkins “will be leaving her position as of (Friday).”

In a text message to the News & Record, Dawkins declined to comment other than to say, “Give me time to digest what happened today.”

Bennett — one of just two historically black colleges for women in the nation — also announced Friday that Gwendolyn O’Neal will serve as interim president effective immediately.* In a news release, the college said it hopes to hire a permanent president by the start of the new academic year in August.

O’Neal is a retired college professor and former chairwoman of UNCG’s consumer, apparel and retail studies department. She’s a Bennett alumna who was on the faculty at Bennett College before moving over to UNCG. In April, O’Neal was one of four Bennett alumnae named to the Bennett Re-Engineering Committee charged with charting a course forward for the college.

In a news release, state Sen. Gladys Robinson, chairwoman of the college’s Board of Trustees, thanked Dawkins “for her time and contribution to Bennett College, especially her leadership during challenging times. ... We look forward to securing new leadership that will take the college to the next level.”

News of Dawkins’ departure came as a surprise to Yvonne Johnson, a Bennett alum, the city’s mayor pro tem and one of two co-chairs of the re-engineering committee. (Tom Ross, the former UNC System and Davidson College president, is the group’s other leader.)

“We had no idea,” Johnson said. She added that a college trustee called her Friday afternoon to tell her about the changeover in the president’s office.

The committee had not discussed Dawkins’ performance or the presidency, Johnson said.

“That’s the board’s job. We did not do that,” Johnson said. “We looked at the whole college to see what sort of things need to be done.”

An Asheville native, Dawkins got her bachelor’s degree from Johnson C. Smith University in Charlotte and a doctorate in adapted physical education from The Ohio State University. Then she started to climb the academic ladder, from professor to dean to provost.

Former Bennett president Rosalind Fuse-Hall hired Dawkins to be Bennett’s provost in 2015. When trustees pushed out Fuse-Hall a year later, they gave Dawkins the interim’s job. A year later, she was named Bennett’s 18th president.

Long before Dawkins got the president’s job permanently, Bennett was in trouble.

Since 2010, the college had seen a steep decline in enrollment. Years of annual budget deficits followed. The college cut faculty, staff and academic programs to balance its books.

In December 2015, the Southern Association of Colleges and Schools Commission on Colleges — the accrediting agency for about 800 Southern schools — warned Bennett about its financial situation. A year later, the commission put Bennett on probation, the more serious of the two sanctions. The commission was concerned that Bennett lacked sufficient financial resources to keep its doors open over the long term.

But that progress wasn’t enough for the commission, which revoked Bennett’s accreditation in December.

Nearly every Bennett student uses federal financial aid to pay for their education.

In less than two months, Bennett raised $9.2 million — nearly twice its goal — in hopes of holding onto its accreditation. Gifts came in from churches, alumnae, Greensboro residents, businesses and High Point University, which donated $1 million to Bennett’s cause. But the commission wasn’t swayed and turned down Bennett’s appeal in February.

Bennett immediately filed a federal lawsuit against the commission, which agreed to restore Bennett’s accreditation while the court considers the case.

Bennett, meanwhile, is seeking accreditation from Transnational Association of Christian Colleges and Schools, a Virginia organization that accredits more than 80 religious schools across the country and abroad. Bennett is affiliated with the United Methodist Church.

* Editor's note, June 24: This story has been corrected to remove a sentence about the search for a permanent president. The college did not say in a news release who will lead that effort.

The Bennett Re-Engineering Committee will meet for the first time Thursday and work throughout the summer.

'Our fight continues': Bennett College loses its accreditation but files suit and gets it back

The college remains accredited as legal action against the Southern Association of Colleges and Schools Commission on Colleges winds through federal court. Bennett also has started the process to seek accreditation from another agency.

A million-dollar gift from a Los Angeles couple and nearly $358,000 more from friends and supporters of High Point University pushed Bennett past its $5 million goal. Next up for Bennett is a Feb. 18 appeals hearing in Atlanta.

Forty-three Bennett Belles turned their tassels at Bennett College in Greensboro, N.C., on Saturday, May 4, 2019.

The Greensboro women's college doubles down on the non-traditional nature of its recent presidential hire.

Despite an extraordinary fundraising push from mid-December 2018 to early February that raised $9.5 million, the Southern Association of Colle…