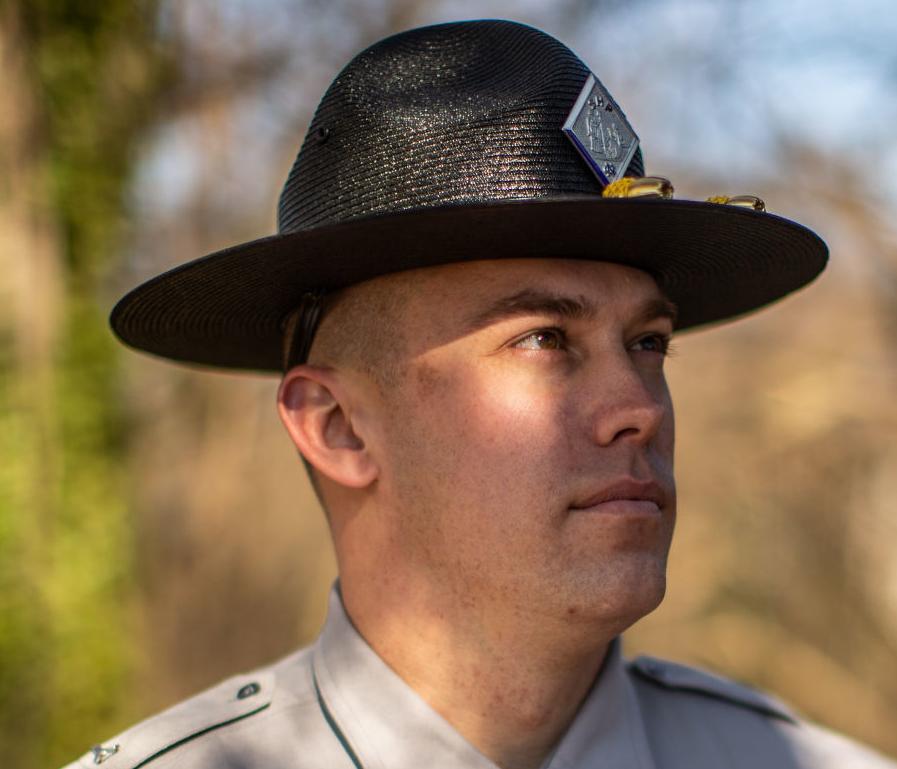 Trooper Logan Self poses for a portrait in Greensboro, N.C., on Wednesday, December 18, 2019. 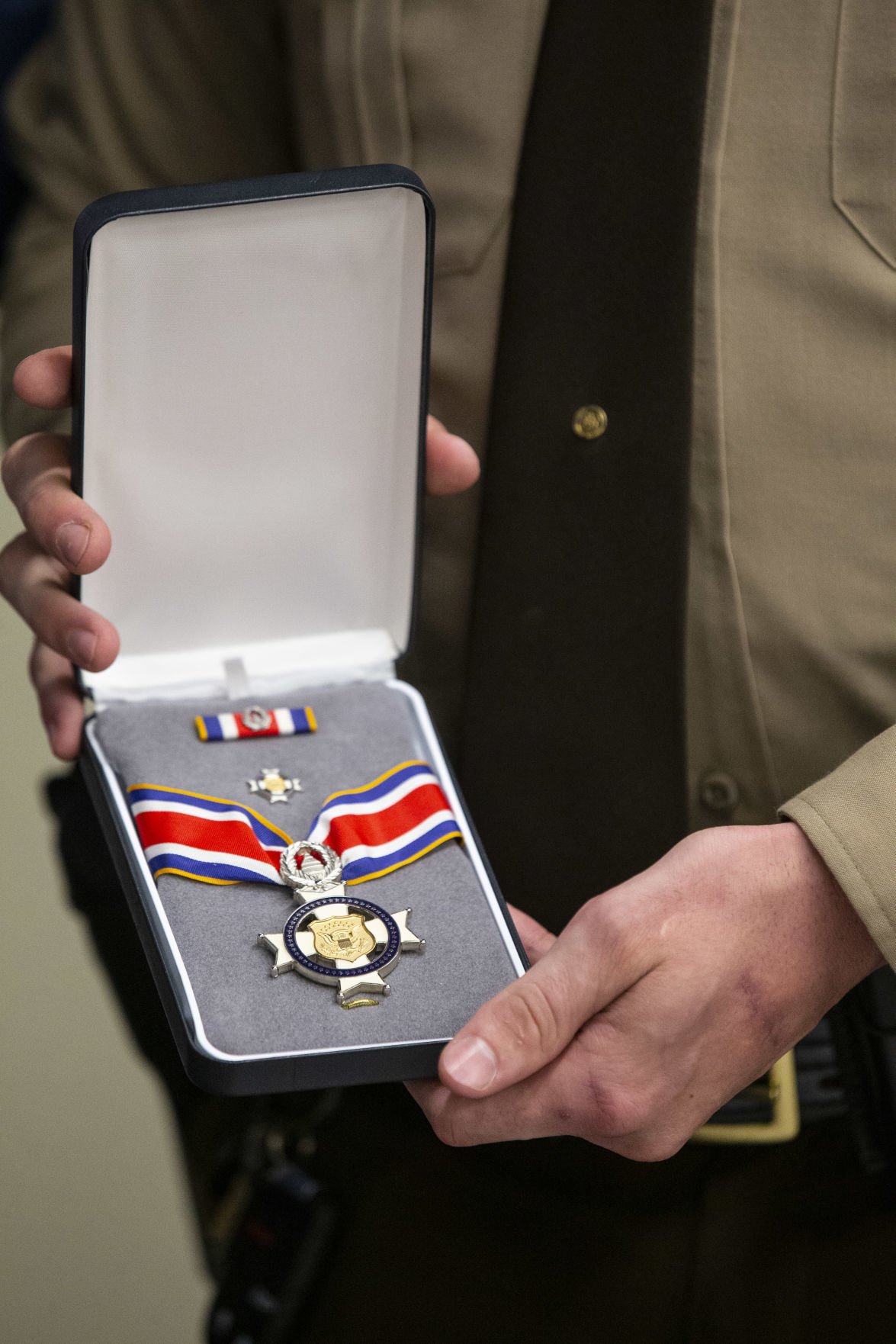 In this July 22 photo, Logan Self, a Guilford County deputy at the time, holds his Congressional Badge of Bravery. 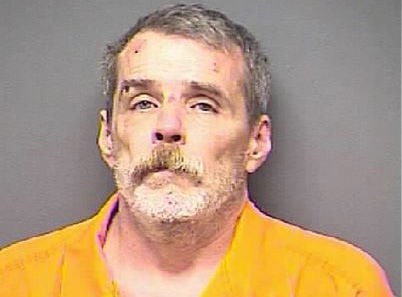 Trooper Logan Self poses for a portrait in Greensboro, N.C., on Wednesday, December 18, 2019.

In this July 22 photo, Logan Self, a Guilford County deputy at the time, holds his Congressional Badge of Bravery.

GREENSBORO — Earlier this month, Logan Self locked eyes across a courtroom with the man who shot him two years ago.

Self, who had been a Guilford County sheriff's deputy at the time, didn't know when he walked up to a door that day in Browns Summit to investigate a 911 hangup that the man on the other side would be wearing a bulletproof vest and carrying three guns.

In a recent interview with the News & Record, Self described the events that day, saying the 911 hangup was meant to lure an officer into an ambush.

"It's a surreal feeling," Self said, "seeing and looking into the eyes of someone who tried to kill you."

On Dec. 9, Donald Odie Meador, 55, of 2800 Brookledge Court pleaded guilty to two counts of attempted first-degree murder, assault on a law enforcement officer with a firearm and kidnapping in the Feb. 27, 2017, shooting that injured Self.

He received a 13-year prison sentence, which frustrated Self, who worries about the next person who might cross paths with Meador.

That includes Meador's wife, who was shot by her husband that day and saw the aftermath of his self-inflicted shooting, which eventually ended the standoff with authorities. Self said she remained with her husband.

"I don't want him to be out where he could potentially hurt someone else," Self said. "I guess in a way it is a slight closure, but part of me, at the same time, kind of moved past it and knew I wouldn't let it define my life."

Since being shot, Self has fulfilled a lifelong dream of becoming a Highway Patrol trooper, a job he began in July.

While he doesn't dwell on it, when asked, Self can remember the shooting in detail.

Dispatchers sent Self, who had been with the Guilford County Sheriff's Office since 2014, to check on a home after someone called 911 then hung up.

He responded about 5:40 p.m. that day to a home at the end of a heavily wooded cul-de-sac. A thick stand of trees separated the six houses that lined the road and Lake Townsend behind them.

As Self walked up to the door, he heard a woman say, "Stop. Don't do this."

"At that point I didn't know what was going on," Self said.

Shortly after Self knocked, Meador cracked the door to look out.

"It was weird," Self said. "I looked at his feet and looked up his body. I saw he had a gun in a holster on his hip and looked up further and realized he had a (bulletproof) vest outside his clothes.

"I knew this wasn't normal."

When he asked Meador what was going on, the man asked why Self was there. Meador opened the door the rest of the way, but kept his left side behind the door frame.

Self, standing in the center of the porch, noticed a woman behind Meador with a "stare like a deer in the headlights."

Without a word the woman, Meador's wife, walked out of the house.

"You ain't going anywhere," Meador told her, lifting a second gun that Self had not seen earlier.

Self pulled his gun and fired a shot at Meador, striking him in the chest area, which was protected by the bulletproof vest.

Meador was aiming at his wife's head.

Self lunged for the gun.

He tried to shoot again, but his gun jammed. As he backed up, he fell off the porch, which had no railings.

He fired again. Nothing.

Meador shot Self in his left biceps. Another bullet hit his hip.

As Meador stood over him, Self waited for the bullet that he thought would take his life.

Instead, Meador began shooting at his wife, who had fled toward the woods. A bullet struck her in the foot, but she survived.

Self told Meador to put his gun down and go inside.

Meador looked back at Self and said he would get help for the deputy.

That angered Meador, who told Self, "I'm going to kill you."

Meador fell to his knees and began to reload one of the guns.

Self's gun still wasn't working. A bullet only partially ejected from a round and the shell casing was stuck inside.

His left arm immobile, Self used his boot and his right hand to eject the bullet and load a new round.

"It's tough to do with one hand," Self said.

During his time as a deputy, he'd practiced — twice — for this type of malfunction.

With his gun working again, Self fired another seven to eight shots at Meador. One of the bullets struck Meador in the foot.

Then Self ran for cover behind the left side of the house.

On the radio, operators were asking what was happening. Self ran to the woods where he found protection behind a large tree.

He had been too afraid before then to look at where the bullet had struck his left arm. With every beat of his pulse, he saw now, he lost precious blood. The bullet had punctured an artery, doctors would later confirm.

He put his right thumb into the wound and squeezed; the blood kept coming.

With every response from his two-way radio, a message of reassurance came through. His friends and colleagues were coming. They would find him. They would save him. Be strong.

But would they be able to even find him?

Self began walking back toward the road, always keeping the woods between him and Meador.

As he collapsed in a ditch, he saw his friend, Deputy Cody Young, drive up.

As Young, a military veteran, wrapped Self's arm with a tourniquet, they heard shooting again from the Meadors' porch. They climbed into Young's patrol car and drove up the street to safety where firefighters and paramedics were waiting to help him.

The worries had begun swirling through his mind. Would he make it through surgery? Would his arm need to be amputated?

As he headed to surgery that night, he told his parents he loved them, and that he would be all right.

After three surgeries and physical therapy Self was able to rejoin the sheriff's office before taking the job as a trooper.

While working on his physical therapy, he met his future fiancee, Krista Tindal. She saw him working out in the gym, had heard his story and began talking to him about his physical therapy since she is also a physical therapist. They began dating, fell in love and just weeks before becoming a trooper, Self proposed to her. They're set to marry in May.

"I knew I wouldn't let it define my life," Self said of the shooting. "I wanted to pursue my goals and live the life I wanted to live."

Donald Meador pleaded guilty as charged to crimes that included shooting Deputy Matthew "Logan" Self who was responding to a 911 hang up.

Donald Meador pleaded guilty as charged to crimes that included shooting Deputy Matthew "Logan" Self who was responding to a 911 hang up.

GREENSBORO — When a Browns Summit man aimed a gun at his wife’s head, it was a Guilford Coun…

Deputy Matthew Self may be taken to Duke University Hospital in Durham for further surgeries and treatment of nerve damage, WFMY-Channel 2 reported.

Donald Ordie Meador Jr., 52, is accused of shooting his wife in the foot and a deputy in the thigh and shoulder, the Guilford County Sheriff's Office has said.

Donald Ordie Meador Jr. Meador wore a bullet-proof vest and was arrested after an eight-hour standoff.

Guilford County Sheriff's Deputy Matthew Self responded to a 911 call at the home of Donald Ordie Meador Jr. Monday. Investigators say Meador shot a woman as she tried to flee, fired at the deputy and later shot himself in the mouth.