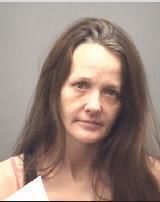 BURLINGTON — A domestic disturbance call Saturday morning resulted in the arrest of three people on drug-related charges, according to a news release from the Alamance County Sheriff's Office.

At 9:07 a.m., deputies were dispatched to a suspicious conditions call in reference to a possible domestic disturbance at a residence south of Burlington.

When they arrived, deputies saw a vehicle trying to leave the residence and stopped the vehicle. While speaking with the driver, Travis Gene Orillion, Deputies observed a semi-automatic pistol tucked between the driver’s seat and center console, according to the release. Deputies on scene knew Orillion was a convicted felon and not allowed to possess a firearm.

Orillion and to other occupants were removed from the vehicle and deputies searched it. They found approximately 24.5 grams of methamphetamine, digital scales, small plastic baggies and numerous rubber bands inside the vehicle, according to the police. While searching the front seat passenger, Jamaica Danielle Morris, deputies found methamphetamine, Ecstasy and Klonopin pills, according to the release.

While searching the backseat passenger, Jeannie Lee Blouin, deputies found methamphetamine, according to the release.

Orillion, Morris and Blouin were transported to the Alamance County Detention Center.

Blouin, 35, of Graham, is charged with felony possession of a schedule II drug.