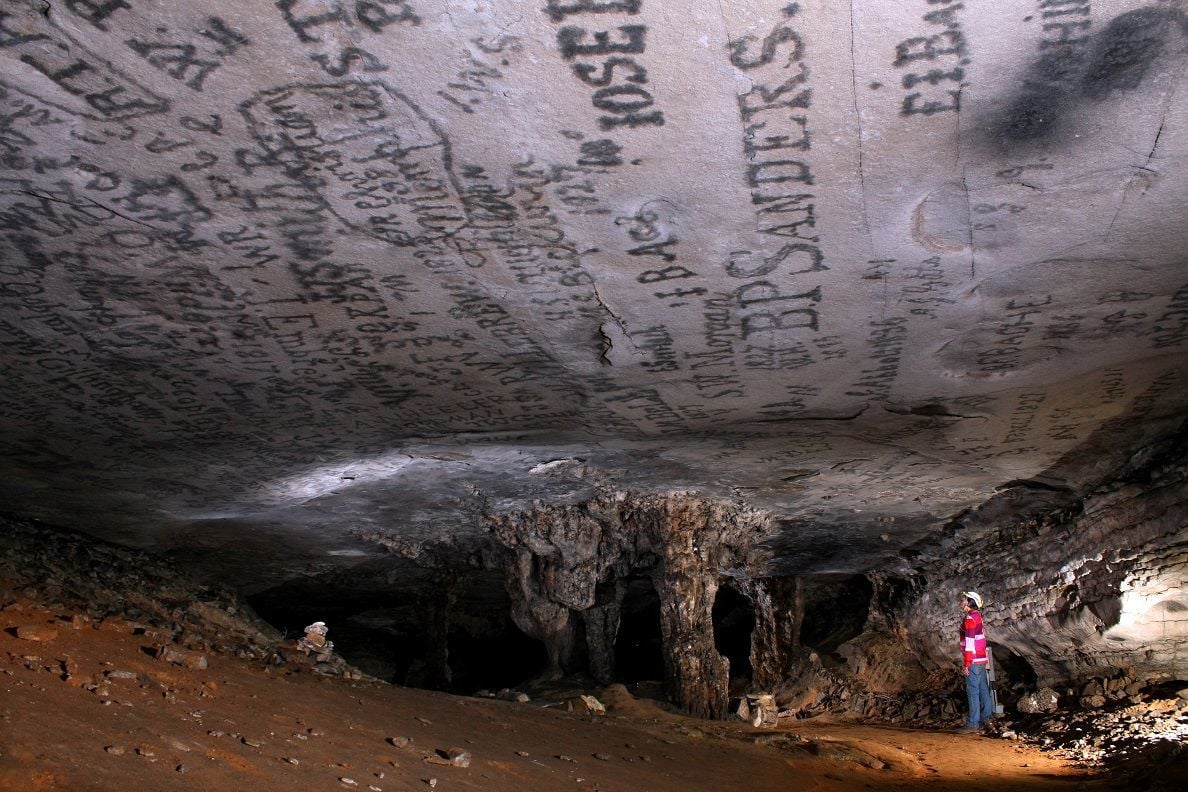 In a section of Mammoth Cave on the history-focused Gothic Avenue Tour, visitors can see centuries-old candle smoke graffiti overhead. 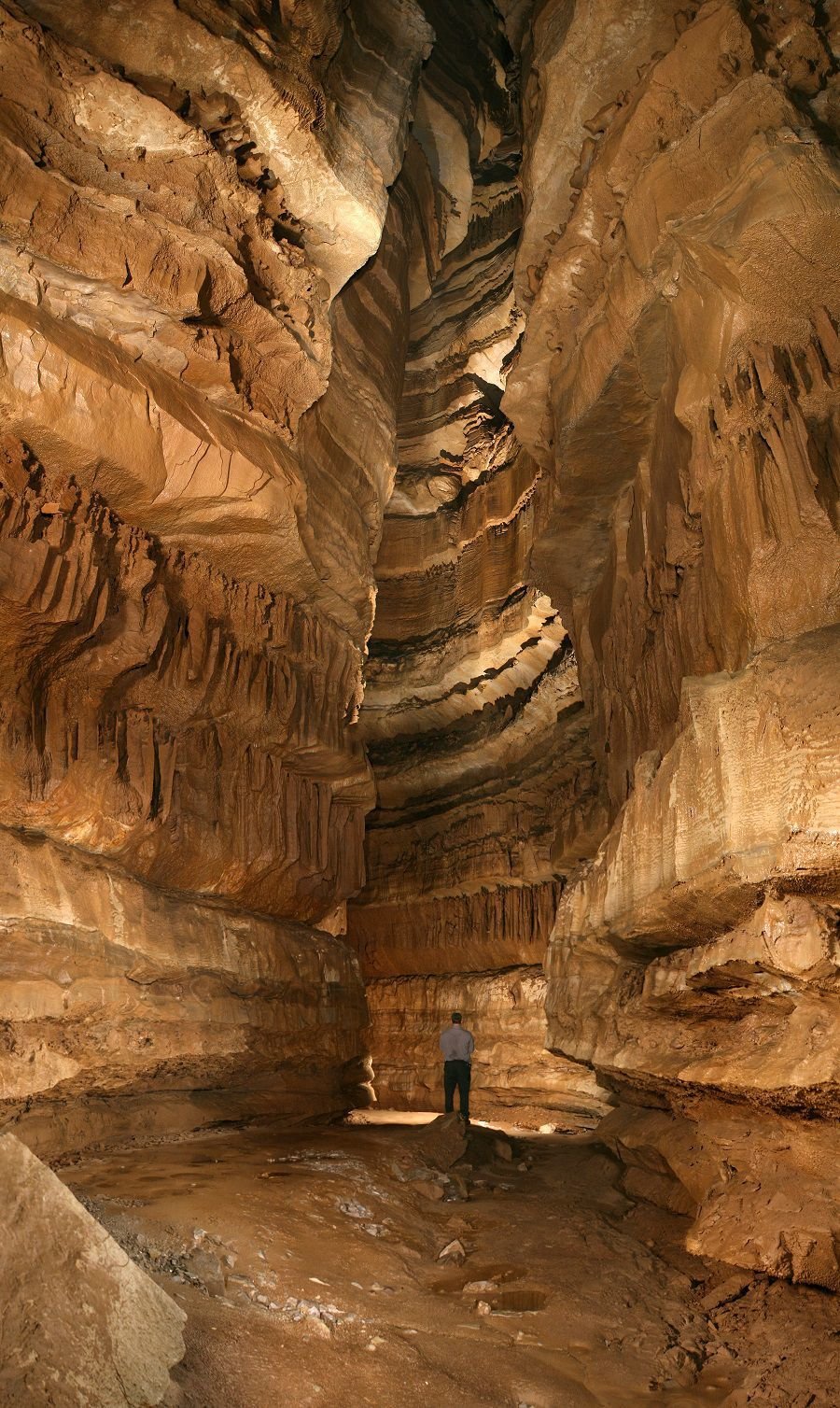 The Cathedral Domes in Mammoth Cave have a natural vaulted ceiling and rise to a height of 150 feet.

In a section of Mammoth Cave on the history-focused Gothic Avenue Tour, visitors can see centuries-old candle smoke graffiti overhead.

The Cathedral Domes in Mammoth Cave have a natural vaulted ceiling and rise to a height of 150 feet.

Weeks before I actually headed to Mammoth Cave National Park for a weekend trip, and a day after I’d booked several guided cave tours, I encircled my chest with a tape measure. I was relieved to confirm I’d be an OK fit — quite literally, if just barely — for the Wild Cave Tour, the longest, most intensive cave tour offered at the Kentucky park.

The guided tour at the UNESCO World Heritage site involved more than five hours of hiking in massive caverns, shinnying up and down twisted passageways, clambering over boulders, and belly-crawling through exceedingly tight sections of rock that wouldn’t give an inch. “Chest or hip measurement must not exceed 42 inches; if you are larger you may not physically pass through the crawlspaces,” the National Park Service advised in no uncertain terms. I’d previously visited Mammoth, which features the world’s longest known cave system. Just walking into the massive cave was wowing. But I wanted to go farther — just as the cave does.

The park offers a number of cave tours for kids and adults of all ages, abilities and interests. Whether you feel at home in tight places or worry about claustrophobia, the cave is big enough (and definitely, in places, small enough) to accommodate different appetites for adventure or leisure exploration. An accessibility tour allows visitors to use an elevator entrance to see Mammoth Cave’s grandeur without steps. The tours vary in length, duration and physical difficulty and — like the park guides who lead many of them — tell parts of the cave’s story.

Besides covering some serious ground underground, I wanted to learn more about the cave’s origins. How did its 412 miles of passageways and counting — with more discovered all the time — come to be?

That led me to the 21/2-hour River Styx Tour on the first morning of my August visit, which culminated in seeing the namesake underground river in the depths of the cave by lantern light. That Saturday afternoon, I took the two-hour Gothic Avenue Tour, which shed light (in relative subterranean darkness) on the early roots of cave exploration, exploitation — including the mining of saltpeter for gunpowder during the War of 1812 — and tourism.

I saved the Wild Cave Tour for last.

As our large group for the River Styx Tour approached Mammoth Cave’s historic entrance, I could feel the chill draft coming up. It contrasted with the summer heat, as water — which has shaped so much of this hidden world — drizzled down in front of the earthbound black hole.

While many elements converged over millions of years to create this one-of-a-kind place, an intricate network of streams and rivers above and below ground is integral to the development of Mammoth Cave.

The River Styx is an example of a subterranean river that is actively creating new passages within Mammoth Cave.

“Exploration is continuing — we have not found the end of the cave yet,” our guide, Chelsea Ballard, told the group.

Another highlight of the tour, Mammoth Dome — a vertical shaft rising around 200 feet, up through which we took spiral stairs — showcases the ongoing erosion. Pit or dome formations created by rapidly moving water are a much younger feature than the cave passageways formed by the underground river system, Ballard explained.

The River Styx Tour also passes through a narrow, short, winding passageway called Fat Man’s Misery. (Many cave features have names, some of which change over time.) As we went through, the passage looked like some unseen hand had taken a giant spoon and scooped out rock, as you might scoop bites from a cantaloupe.

I’m a latecomer to Mammoth Cave, as is everyone else who visits it these days. As I descended into the historic entrance again for the Gothic Avenue Tour, I was reminded that I was following in the footsteps of its first explorers, Native Americans who entered the cave millennia ago without the aid of concrete steps or any other infrastructure.

The mummified remains of some of these earliest explorers, estimated to be 4,000 to 5,000 years old, drew many tourists to Mammoth Cave in the early 1800s, after commercial saltpeter mining ended there. “Travelers in the area would make side trips to Mammoth Cave to see the geological wonder,” said guide Dave Spence, who led this tour. “But mostly, the fame of Mammoth Cave spread as visitors became witness to the artifacts and human remains from the earliest prehistoric explorers.”

We saw the names of early explorers, of cave owners — from when it was privately held, well before it became a national park in 1941 — and of tourists, written in candle smoke on the ceilings. Such was the nature of early visitation, predating the leave-no-trace ethic and modern efforts to balance tourism, which still has an impact, and preservation.

In addition to the obvious underground attraction, Mammoth Cave features over 80 miles of trails, traversing 53,000 acres of hardwoods, bluffs and hills bisected by the Green River and bypassing sinkholes and cave entrances. So not only is there plenty to do, but you also get a glimpse from above ground of the forces at work below.

The popular Cedar Sink Trail, for example, snakes through the wooded hills and passes a deep depression, in an area pockmarked by sinkholes — a site where water from an underground river system ever so briefly sees the light of day.

I got a view of the geologic handiwork underground on the Wild Cave Tour. As I was worming my way through a narrow passage called Bare Hole that Sunday morning with 11 other park visitors, I took stock of the chest measurement I’d taken and found I had little wiggle room.

To call it an army crawl would be spatially generous; this section doesn’t allow one to raise up that high even. It’s a test nearly right out of the gate, and I calmed myself to take it — shimmying, my boots kicking hollow rock as I squeezed with the other visitors through the tightest section: 91/2 inches from floor to ceiling.

We all passed through in good spirits, and later I felt loose enough to laugh with the others through another tight squeeze, called No Name, that gets down to about eight inches. (I guess “Really Tight Squeeze” was taken.) We had to turn our helmeted heads and boots sideways to get through the most cramped segment.

Our park guides — Jenna Hammond, who was shorter and relished the tight squeezes, and the taller Jacob Bolton, who spidered his way up climbs with ease — kept the group on track. As Hammond pointed out, a highlight of the Wild Cave Tour is seeing parts of the cave that most people never get to. “You get to really experience it in such a unique way,” she said.

Between the tight spots, we came out into a corridor called Grand Avenue that cars could drive through. This, of course, isn’t an actual road but it’s big enough to accommodate one. The area is going to be rehabbed to better accommodate future visitation.

In one space as awing as any I saw on my underground weekend, the 14 of us walked into a veritable canyon, with a natural vaulted ceiling. Our wonderment seemed to match the fittingly named Cathedral Domes’ dimensions: 150 feet up and 140 feet long.

In Mammoth Cave there are far fewer stalactites, stalagmites and other dripstone formations — in technical speak, speleothems — compared with caves such as Carlsbad Caverns in New Mexico, which I’d visited with my brothers in the spring. Yet Mammoth Cave includes its flourishes, such as Frozen Niagara, where we ended the Wild Cave Tour. There, the massive (everything seems bigger in Mammoth Cave) dripstone takes on the appearance of ancient falls stopped in their tracks eons ago.

But before we got to that final crescendo, it became clear that even passageways that seemed barren could turn corners to wonders such as Cathedral Domes.

There, in quiet reflection, we eventually turned off our headlamps to experience the capped chasm in total darkness and quiet — except for the sound of water, which never ceases its work in the cave, falling gently nearby. It was hard to imagine as we sat there briefly, in a sort of silent reverence, that there could be anything like this exact place in the world. And, in fact, with Mammoth Cave, there’s not.

The law is a family affair for Kenneth M. Johnson, Kya Johnson and Ryen John Perry

Three is better than one - churches join forces to fight hunger