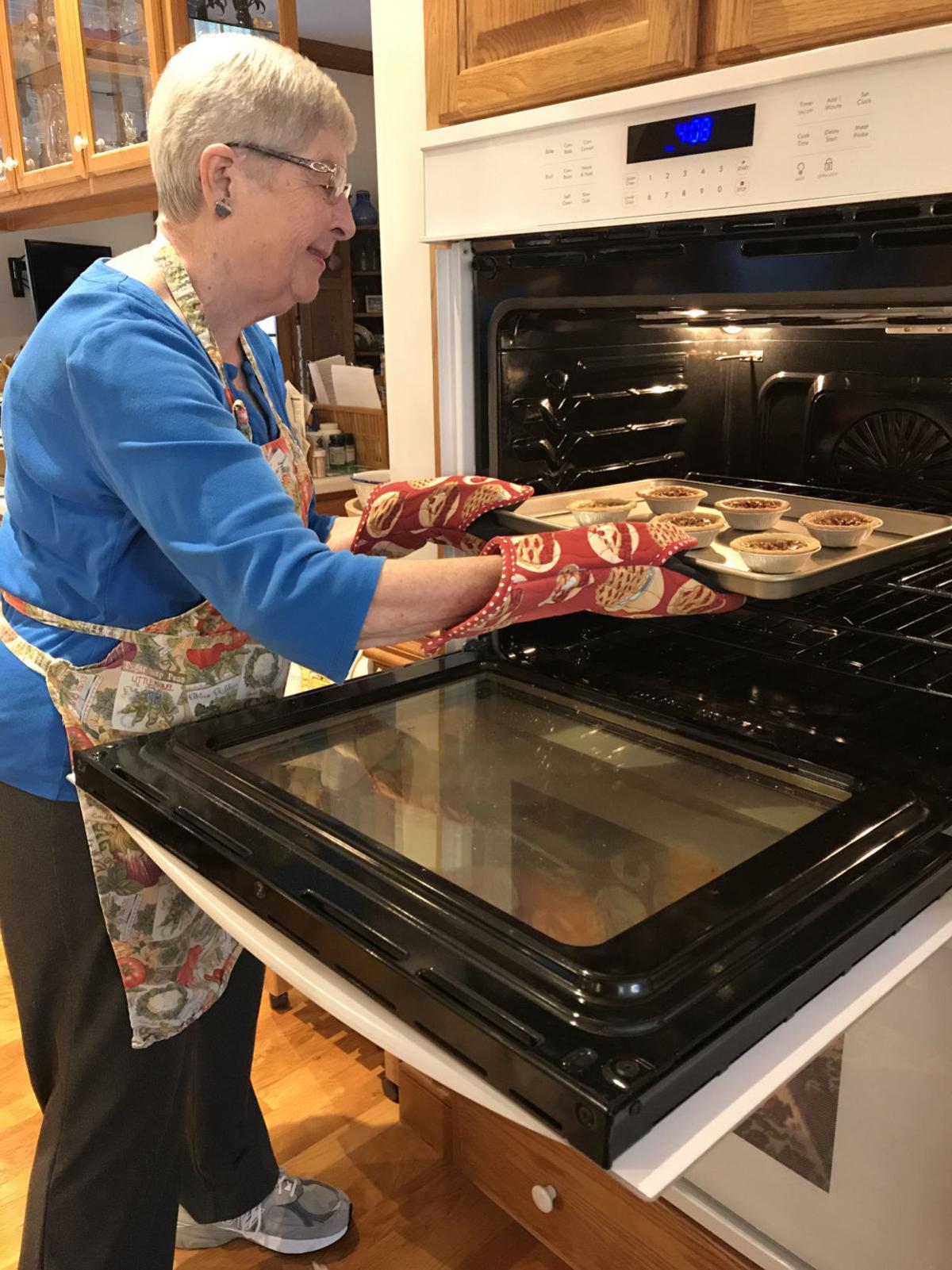 Nancy Langston takes a tray of pecan tarts from her oven as she prepares for the Nov. 23 holiday fall fair. 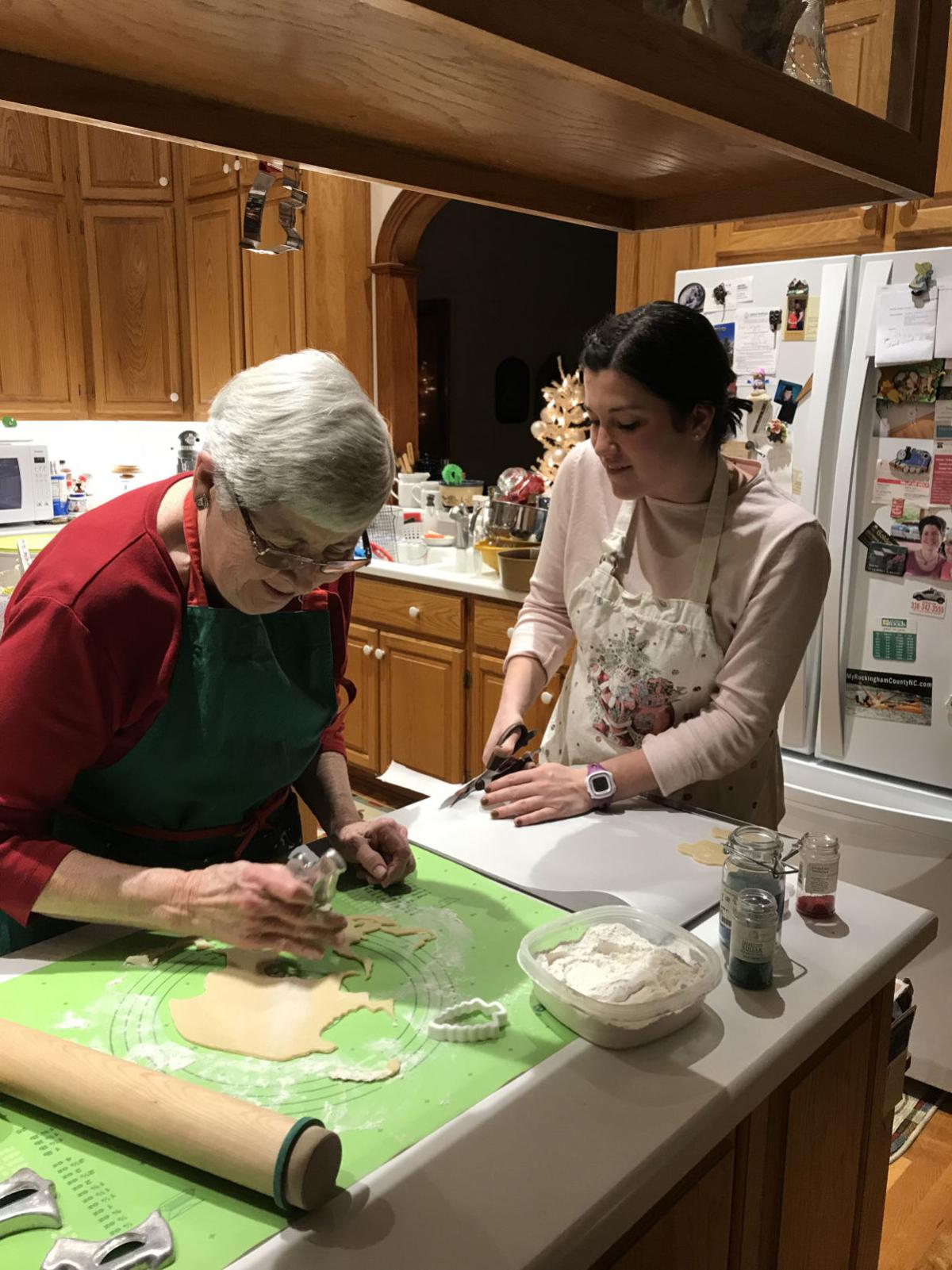 Rachel Langston, 24, of Greensboro, a nurse at N.C. Baptist Hospital, makes Christmas cookies with her grandmother, Nancy, in 2018. Rachel is one of seven grandchildren. 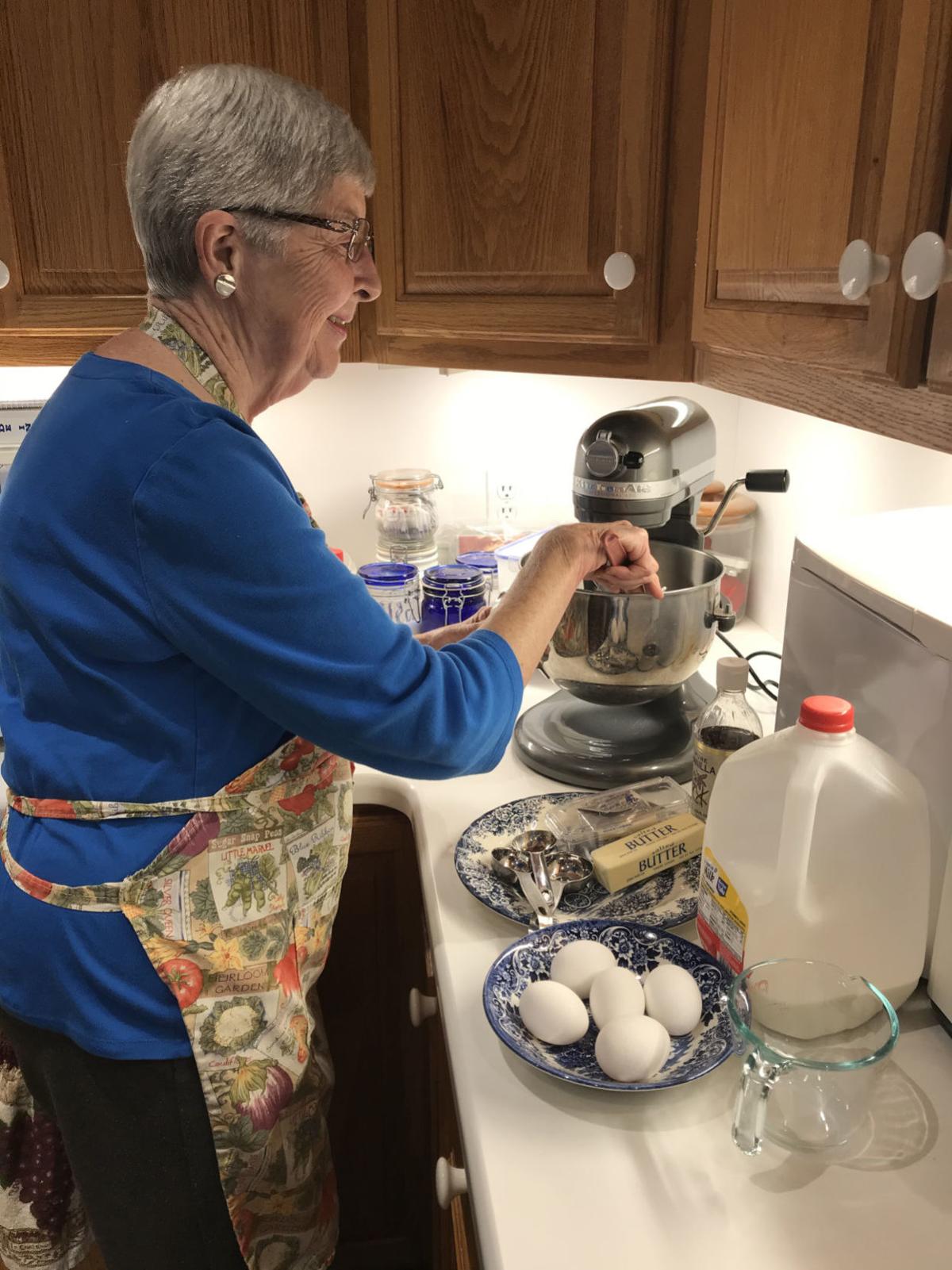 Nancy Langston mixes up a batch of goodies in her Reidsville area kitchen. 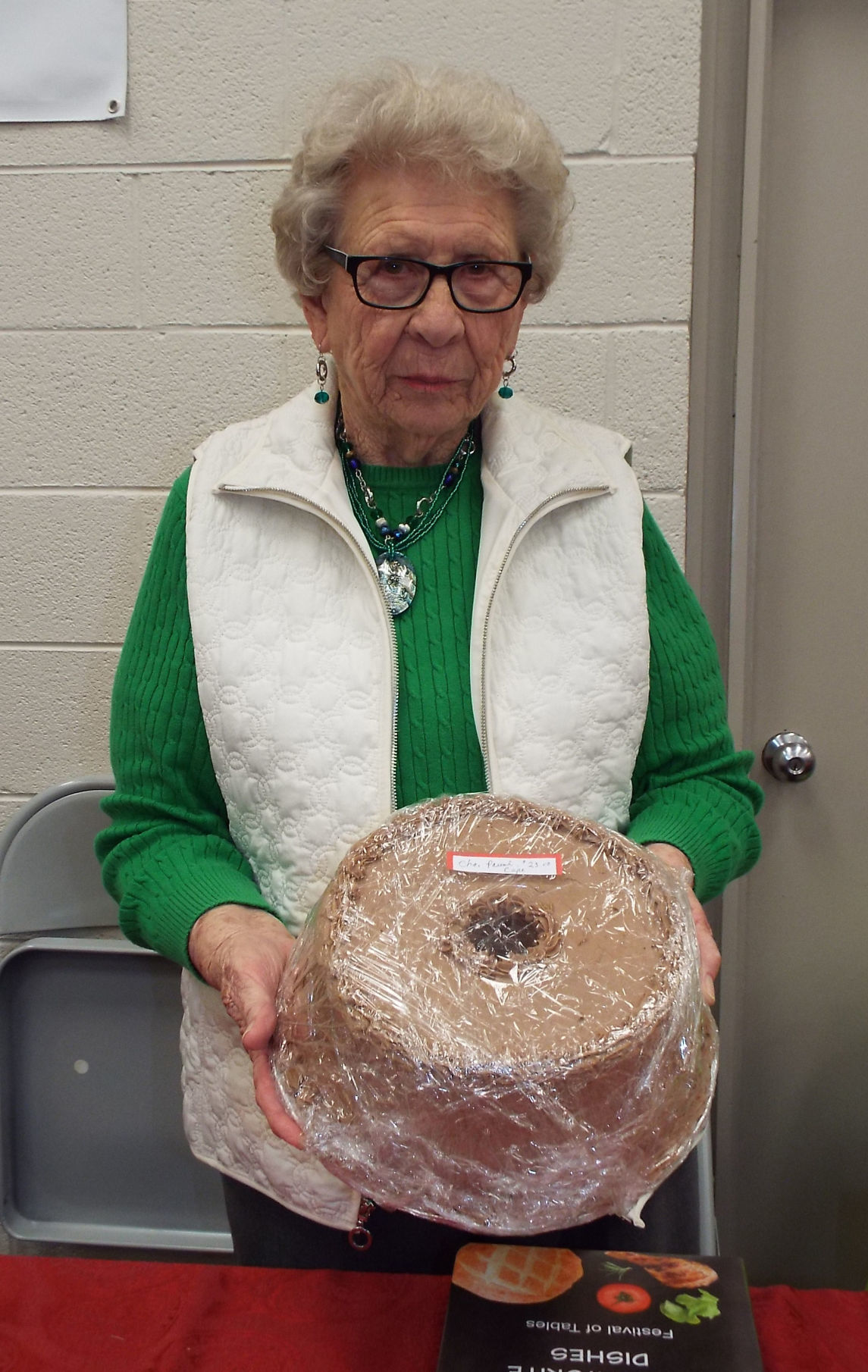 Virginia Caldwell shows one of the pound cakes at last year’s holiday fall fair. Caldwell has been taking baked goods to the fair for about 30 years. 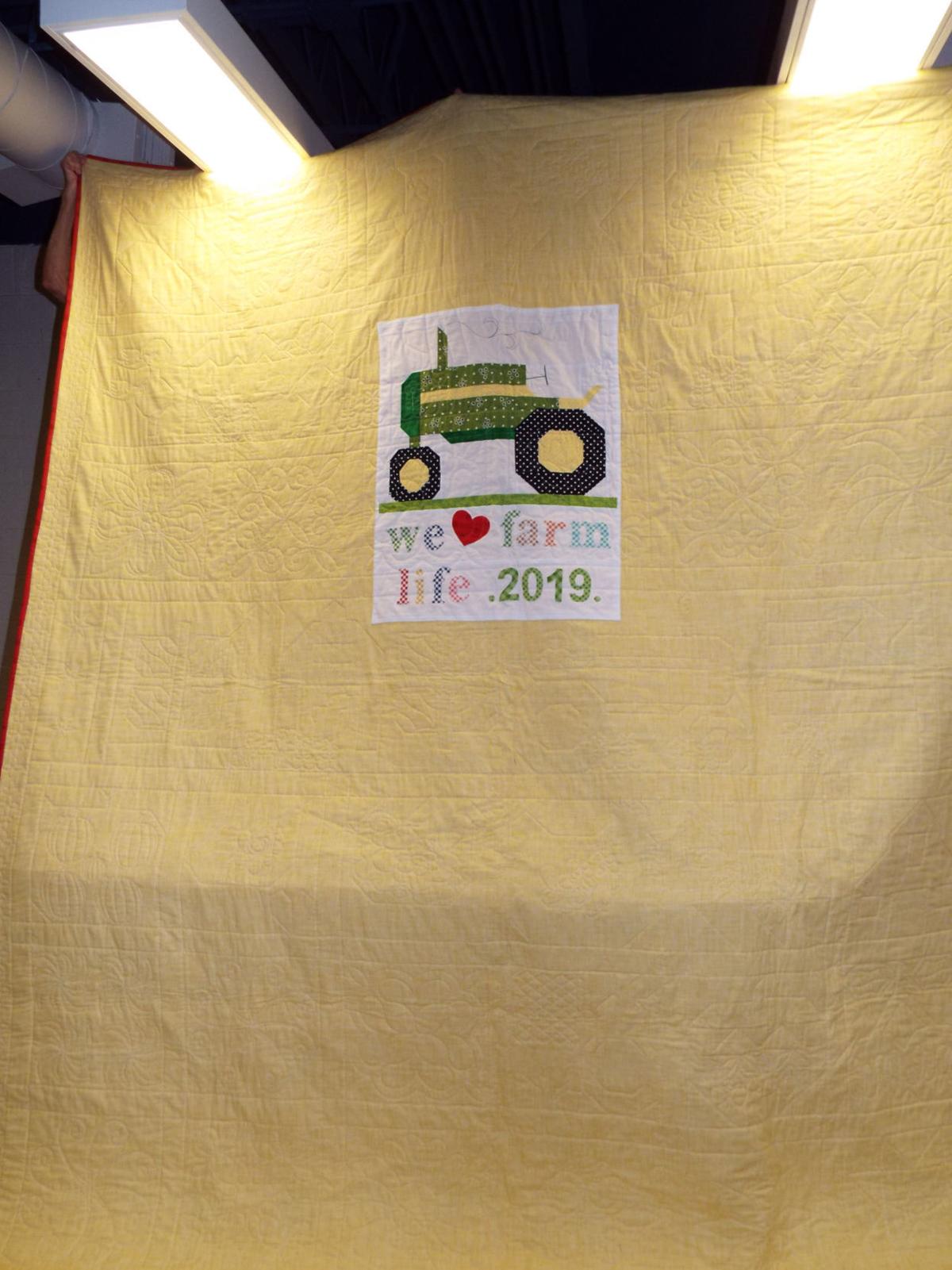 The “Farm Life” king-size quilt will be raffled at 1 p.m. Nov. 23. Tickets will be available at the event or can be purchased from any home extension club member or at the Agriculture Center in Wentworth prior to the event.

Nancy Langston takes a tray of pecan tarts from her oven as she prepares for the Nov. 23 holiday fall fair.

Rachel Langston, 24, of Greensboro, a nurse at N.C. Baptist Hospital, makes Christmas cookies with her grandmother, Nancy, in 2018. Rachel is one of seven grandchildren.

Nancy Langston mixes up a batch of goodies in her Reidsville area kitchen.

Virginia Caldwell shows one of the pound cakes at last year’s holiday fall fair. Caldwell has been taking baked goods to the fair for about 30 years.

The “Farm Life” king-size quilt will be raffled at 1 p.m. Nov. 23. Tickets will be available at the event or can be purchased from any home extension club member or at the Agriculture Center in Wentworth prior to the event.

WENTWORTH — While many regulars of this annual holiday event look forward to purchasing unique gifts and decorations, others take the opportunity to make sure their holiday tables are laden with tasty homemade cakes, pies and other treats.

This year’s Rockingham County Cooperative Extension Holiday Fall Fair is from 9 a.m. to 2 p.m. Nov. 23 at the Agriculture Building, 525 N.C. 65 in Wentworth.

More than 50 vendors will be offering a variety of food and crafts. Food booths, including the popular kettle popcorn, will be set up outside, while the interior rooms will be filled with a variety of items for gifts and decorations.

The highlight of the day will be the drawing at 1 p.m. for the “Farm Life” king-size quilt made by members of the quilting club. Raffle tickets are $1 each. Proceeds from the event and the raffle will be used to provide scholarships for local students.

Those looking for baked goods and Christmas gifts should check out the booths of two popular area bakers who will be offering a variety of cakes, pies, breads, fried pies and other specialties.

Virginia Caldwell has been participating in the fair for at least 30 years and Nancy Langston has been coming for the past five years.

Caldwell, 86, said she enjoys coming back to “see people you don’t see from one year to the next. It’s fun.”

Although she offers a variety of homemade cakes, the most popular is her fresh coconut. Several people order cakes a year in advance. She also has German chocolate, different kinds of pound cakes, and sometimes adds banana bread or pumpkin roll “just whatever I can get done in the dessert line,” she said.

Her apple and sweet potato fried pies — between 75 and 100 — disappear quickly. She makes the dough for those from scratch, rolls it out and bakes the pies the day before the fair with the help of her sister, Linda Duncan, from Stokes County. Her daughter-in-law, Dawn, works with her at the fair.

Although she is a native of Stokes County, Caldwell moved to Rockingham County in 1955 when she “got married and switched counties.” Her husband, the late Jim Caldwell, who grew up in the Ayersville community, was a farmer and worked at Tultex.

She graduated from Lawsonville High School in 1952. Caldwell worked at Gem Dandy for a few years, before retiring in 1998 from Service America. The Caldwells had five sons, seven grandchildren and one great-granddaughter.

Learning to cook at a young age on a farm was a necessity since parents usually spent long hours in the fields, both Langston and Caldwell said, with Caldwell adding, “Back then, you had to help with everything.”

The oldest daughter, Caldwell was 13 when her mother taught her to make egg custard.

From there, she graduated to helping prepare meals for the family. Her mother got everything ready to cook before leaving for the fields, and Caldwell finished it up and had it ready when her parents, seven brothers and sisters, came in from working or playing.

Now, Caldwell still shares her cooking skills with her family and friends (she makes fried pies all year round for people), as well as for the extension fair. She starts baking for the fair the first week of November and “I just do what I can do” several days a week. She wraps and freezes the cakes and brings them to the fair frozen.

A native of Rockingham County, Langston is the daughter of the late Rupert “Jack” and Frances Wagoner Jones. Jack was a founding member of the Farmers Market on Market Square in Reidsville. Initially, farmers brought their produce into town and lined up against a wall at the old Farmers Warehouse. Today, they have a modern facility for their operation.

After graduating in 1956 from Reidsville High School, Langston enrolled in the Charlotte Presbyterian Hospital School of Nursing, earning her nursing degree three years later. While in school, she met Mason Langston, who lived in Charlotte but was in the Air Force. When he was stationed in Japan, the two corresponded frequently.

She worked at Moses Cone Hospital in Greensboro for nine months before she and Mason married in May of 1960 and moved to Kinston where he worked for DuPont.

“That was the only time I worked for pay as an RN,” Langston said, adding she had three children in nearly five years after her marriage. Over the years, her husband’s career took them to several places, including Iran and Spain. When Mason took an early retirement from DuPont in 1993, the couple moved to Reidsville.

Langston began cooking when she was about 8 years old and asked her mother if she could make a cake.

“That was before we had mixers, or electric stoves,” she said. Her mother helped get everything together, then Langston mixed it by hand and baked it in a wood stove. She also made the chocolate icing for the yellow cake.

Growing up on a farm, it was only natural that while her mother was working in tobacco, the young Langston took over the cooking duties.

At that time, meals consisted of homegrown vegetables and several meat dishes. And, no meal was complete without biscuits, fresh home-churned butter and “lots of sweet tea.” Often, Langston prepared a cake or pie for dessert — all in one day.

“I’d get up early in the morning and start working at it to have it ready by 12.” Of course, a full meal had to be cooked seven days a week as a rule.

After returning to Rockingham County following Mason’s retirement, Langston went with her father three days a week to the Farmers Market, helping him sell his produce.

“We had lots of zucchini left over and I started making zucchini bread. He kept after me to bring some up there and sell it,” she said.

When she finally “relented,” that was the beginning of Nancy’s Tarts, Etc., her home-baking business.

She still takes baked goods to the Farmer’s Market when it’s open and takes orders for special items such as her popular pound cakes, breads (including sourdough), pies, fried pies and tarts. Her oldest child, Cynthia Langston, helps her on weekends.

Although Langston has many repeat customers, her children, Cynthia, David and Douglas, are her favorite. Of course, the grandchildren are always happy to help “MeMa” in the kitchen.

“I just love to cook,” Langston said, adding she makes a lot of soup in the winter months.

“My grandchildren that live here are always asking me when is it going to be soup time?”

Five years ago, Langston began selling her baked goods at the homemakers’ fair and did really well.

She takes a large assortment of food and has return customers waiting in line for her open her booth.

“I look forward each year to seeing my regular customers from the Farmers Market and my new customers,” Langston said. “It’s a lot of fun, and there are a lot of other vendors there that I see each year.”

Where: The Agriculture Building, 525 N.C. 65 in Wentworth

Other: In addition to the variety of baked goods, items scheduled to be available at the fair include: