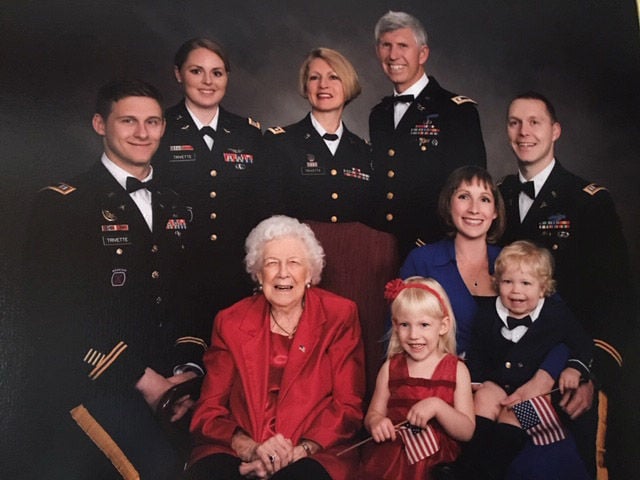 The Trivette family. After his long military career, Bill Trivette worked as Assistant Federal Public Defender in Greensboro from 1993 until 2013, when he retired and entered a solo criminal practice in federal court. 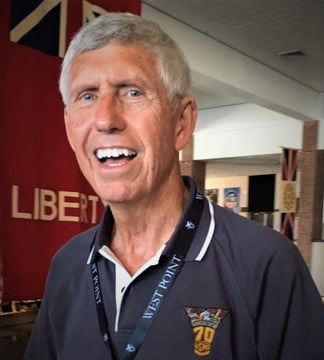 Bill Trivette served for 23 years in the military. 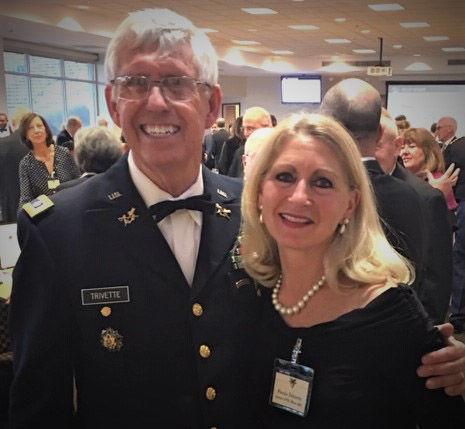 The Trivette family. After his long military career, Bill Trivette worked as Assistant Federal Public Defender in Greensboro from 1993 until 2013, when he retired and entered a solo criminal practice in federal court.

Bill Trivette served for 23 years in the military.

Writing about William Stimson “Bill” Trivette has always been a “when” instead of an “if.” That we are “sheltered in place” about 20 miles apart for our interview is no problem.

His contributions to our veterans’ community are unparalleled — making this piece a very easy write.

Now 72, Trivette remembers the day his 23-year military journey started: “When I was about 10 years old, the Christmas program at our church in Albemarle was led by a hometown West Point cadet. I thought his uniform was very snappy.

“My scoutmaster and several assistant scoutmasters were World War II paratroopers, so well before graduation from high school, I was enamored with going to West Point and serving in an airborne unit.”

Trivette was an Eagle Scout and member of the Order of the Arrow.

Initially, things went according to plan for Trivette. After West Point came infantry, ranger and airborne training at Fort Benning; duty with the 82nd Airborne Division; and later, Special Forces training at Fort Bragg. While some of his West Point classmates went to Vietnam, Trivette was sent to Korea, where he served as a mortar platoon leader on the DMZ.

After a year in Korea, Trivette returned to 5th Special Forces Group at Fort Bragg where he served as an A Team Commander.

Trivette is convinced the Army way and fate worked together for him. “One of my electives at the Academy was a law course. I enjoyed the course but didn’t think about it for several years — then I heard about the Army Legal Education Program.”

The Army Medical Corps has a huge presence at Fort Sam Houston, including many Army nurses. During his first year of law school, Trivette married one of those newly-commissioned nurses, the former Paula Jackan.

From that point, the Army should use the Trivette family for a recruiting poster. They worked in their respective career fields at Fort Carson, Colo., and at Frankfurt, Germany. When he worked at the Pentagon, she worked at Walter Reed Hospital.

When she became a White House nurse to Presidents Bush and Reagan, he worked at Fort Meade and a Pentagon outpost in Washington, DC. They retired together in 1993 as lieutenant colonels and moved to Greensboro.

Along the way, they had two sons who should also be on the recruitment poster. Evan is an Army medical doctor. He graduated from West Point and is an instructor at Fort Sam Houston — he and his wife have three children.

Eric is an Army Aviator and currently assigned to the Pentagon. He married an Army Aviator, and she now works in a force management position. They have two children.

Paula Trivette retired from Moses Cone Hospital as a trauma nurse supervisor in 2019.

Bill Trivette worked as Assistant Federal Public Defender in Greensboro from 1993 until 2013, when he retired and entered a solo criminal practice in federal court.

His card says he is an attorney at law.

Attorneys are good at keeping up with their hours. Fortunately, Bill Trivette doesn’t look at his hours for the West Point Society of the Piedmont as billable hours.

The WPS is an independent group from the U.S. Military Academy at West Point. Many of the members are USMA alumni — of which there are 200 or so in the Triad — but that is not a membership litmus. While the organization is heavily flavored with West Point and Army veterans — and leans heavily for Army to beat Navy — most of the other services are represented as well.

When asked how he became founding president of the organization, Trivette replied, “I guess I was the only one to raise my hand!”

The group holds quarterly meetings with great programs. One featured Joe Galloway, author of We Were Soldiers Once — And Young. Over 500 people attended.

For more information on the West Point Society, visit westpointaog.org.

Harry Thetford is a retired Sears store manager and author of REMEMBERED, a book about 99 former students of Greensboro Senior High School (Grimsley) who were killed during WW II. Contact him at 337/707-8922 or htolharry@gmail.com.