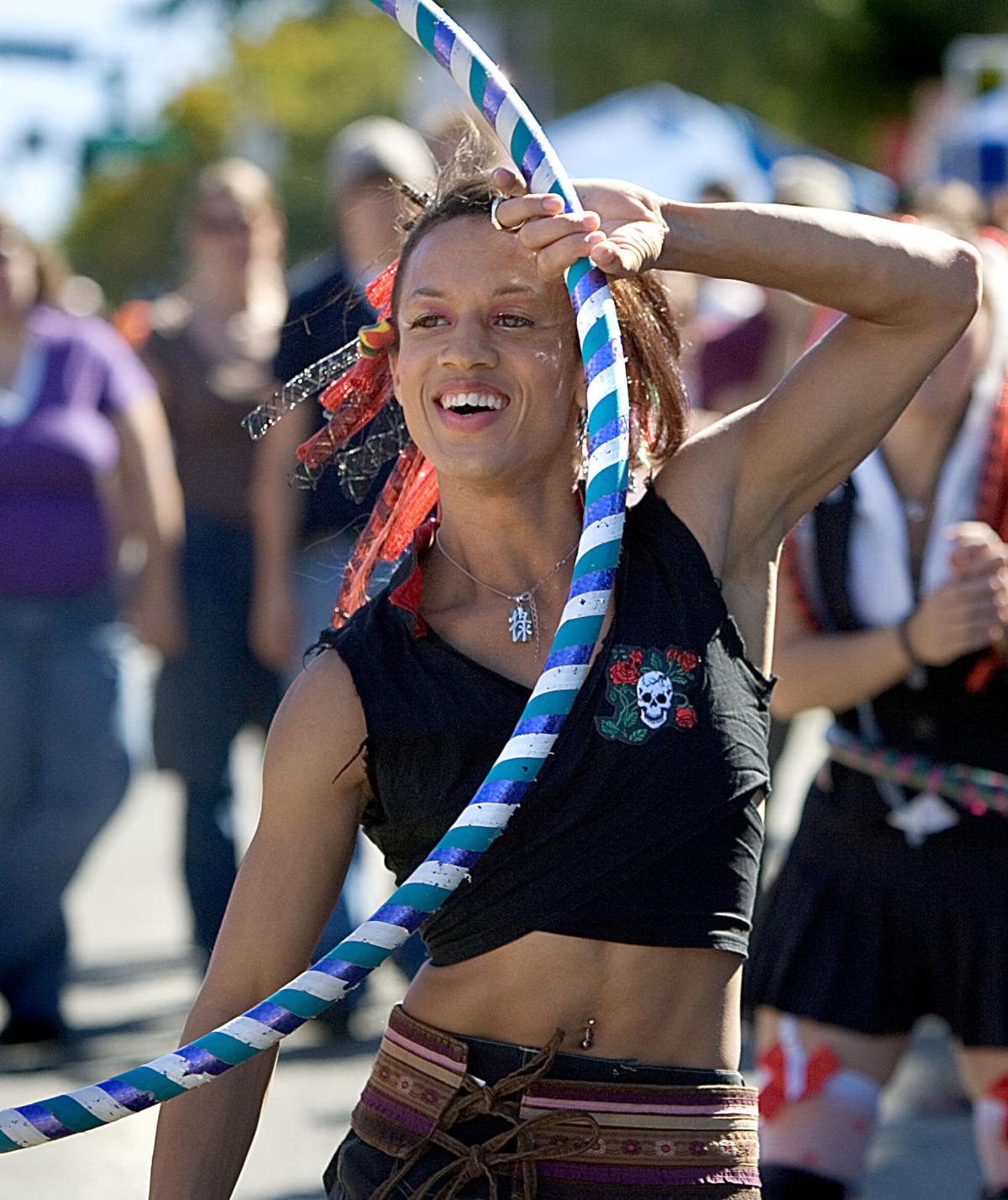 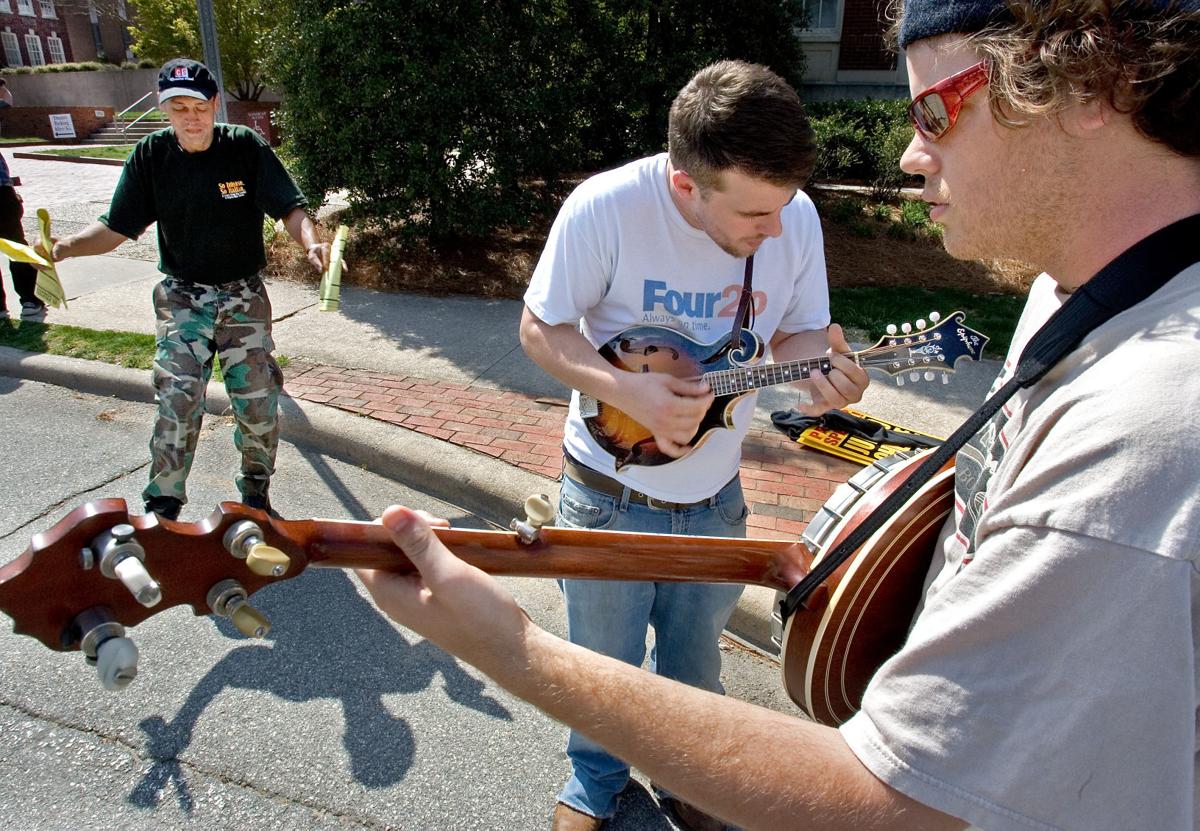 Andy Eversole (rt) decided to play his banjo as he walked around taking in the festivities at the Tate Street Springfest. Eversole happened to stop in front of the old UNCG Music Building to play for David McNebb (left) who wanted to dance. Along came Russ Dunn (ctr), who had been playing with his group Swampboat nearby and had never met Eversole, to join in and jam with his mandolin. With a crowd now drawing in, the two musicians continued to play to the whoops of those gathered, becoming another slice of delight during the Tate Street Springfest 2006, in Greensboro, NC, Saturday, April 1, 2006. (Joseph Rodriguez / News & Record) 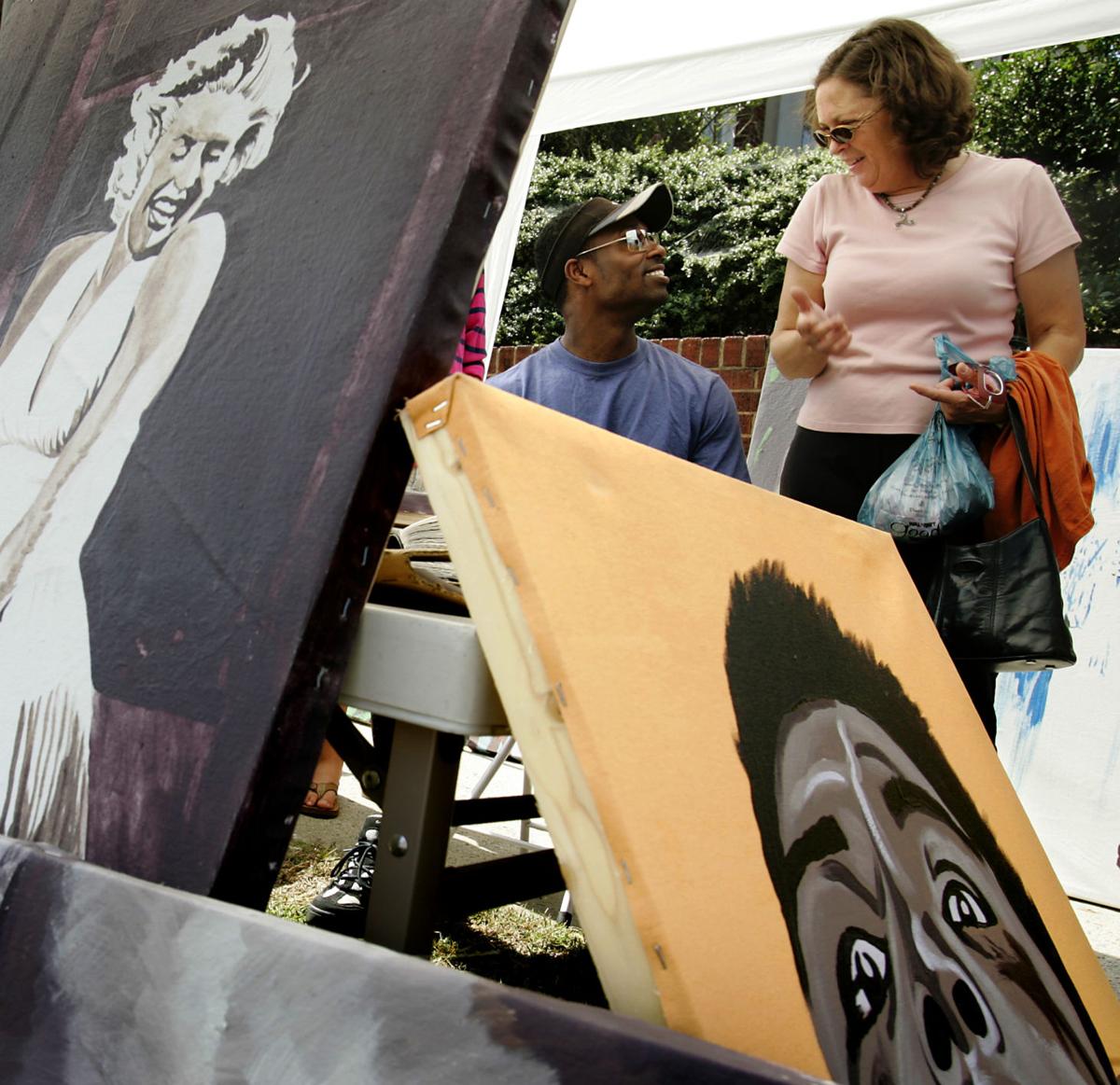 Susan Foust (right) talks to painter Lewis Pearman about what to write when he signs a painting of Ray Charles that Foust was buying for her son Devin, a huge Ray Charles fan, at the Tate Street Festival on Saturday, Oct. 1, 2005. (News & Record, Kim Walker)

Andy Eversole (rt) decided to play his banjo as he walked around taking in the festivities at the Tate Street Springfest. Eversole happened to stop in front of the old UNCG Music Building to play for David McNebb (left) who wanted to dance. Along came Russ Dunn (ctr), who had been playing with his group Swampboat nearby and had never met Eversole, to join in and jam with his mandolin. With a crowd now drawing in, the two musicians continued to play to the whoops of those gathered, becoming another slice of delight during the Tate Street Springfest 2006, in Greensboro, NC, Saturday, April 1, 2006. (Joseph Rodriguez / News & Record)

Susan Foust (right) talks to painter Lewis Pearman about what to write when he signs a painting of Ray Charles that Foust was buying for her son Devin, a huge Ray Charles fan, at the Tate Street Festival on Saturday, Oct. 1, 2005. (News & Record, Kim Walker)

It has been called Noon to Moon and the May Day Festival. It has taken place in spring and autumn and, on at least three occasions, both seasons in the same year.

These days, it’s known as the Tate Street Festival, an annual event that’s one part street bazaar, where artists and crafts people can sell their wares, and another part outdoor music festival with performances by local bands.

The event occurs every autumn, rain or shine. And even when it drizzles, as it did last year, that doesn’t stop the locals or visitors from across North Carolina and beyond from attending.

“They just keep their spirits up and keep on with the party and go all the way through,” says Jaime Coggins, coordinator of the Tate Street Festival in its current form.

She believes one reason the festival continues to get support from businesses and the community is the way it makes people feel welcome.

Sitting on the patio in front of New York Pizza, Coggins is interrupted when someone blasts the Electric Six song “Gay Bar” from inside the restaurant. She laughs, dashes inside to turn the music down and returns for her interview.

“We’re on Tate Street,” Coggins says, trying to explain the abrupt sonic outburst. “That’s what I love about this area. People are so crazy.”

Coggins is planning to transform the area on Tate between Spring Garden Street and Walker Avenue into a temporary paradise of live music, artists and vendors when the Tate Street Festival returns Saturday. The festival will include dancers, drummers, a magic show and jugglers, as well as performances by regional music acts such as House of Fools, the Othermothers and Eating the Invaders.

Coggins, who lives just off Tate Street, spends most of her time hanging out there. She says she became the coordinator of Tate Street Festival by default. The former accountant for Adams University Bookstore, she formerly managed only the arts and crafts dealers who sold their wares on the street. But when the other organizers of the festival sought to relinquish their duties four years ago, she felt obligated to step up her role and coordinate the rest of the elements.

“I had a bunch of vendors come up and say, ‘Are we going to do Tate Street Festival this year?’ and I really couldn’t tell them no,” Coggins says. “I have a hard time saying no, when it comes to something people really enjoy.

If Tate Street Festival’s primary goal is to make people happy, it served a different purpose when it began in 1973.

During the counter-culture era of the late 1960s and early ’70s, the street carried the nickname “Tate-Ashbury.” Young people with long hair, runaways, bikers, beggars and drug users –– all lumped together both lovingly and pejoratively under the term “street people” –– flocked to Tate Street. When their numbers reached the hundreds, some area business owners and the UNCG administration went on the defensive.

“What we heard, the school was recommending to students not to come to Tate Street,” says Grant Snavely, owner of The Corner, a flower and gift shop that his father, Hugh, opened in 1950.

Snavely says that UNCG fired the first major volley at the street people.

In an effort to make students feel safer at night, the school opted to remove one of the street people’s favorite hangout spots, a grassy knoll outside of the university’s Brown Building known as “Hippie Hill.” They replaced the soft grass with thorny bushes, leaving many of the street’s regulars feeling unwelcome and under attack. It even inspired a local folk tune, titled “The Ballad of Hippie Hill.”

Smarting from the alleged recommendation that students should avoid their businesses, Tate Street’s merchants and businessmen joined the fray. UNCG English professor Jim Clark says the owner of a grocery store where College Mart now operates was rumored to have dumped motor oil on the sidewalk in front of the store where many of the street people liked to sit. The business owners also allegedly placed a metal strip around the edges of a street planter.

“The medical offices and the merchants put a metal strip there that was sharp,” Clark says. “That was to keep people from sitting there.”

Before joining UNCG’s faculty, Clark was the director of the Ministry for Social Change, a political action group in Greensboro that offered voter registration, military draft counseling, medical services, a free kitchen and legal advice to the community. He and his fellow group members recognized the growing animosity among Tate Street’s merchants, UNCG officials and the street people, and Tate Street Festival was one of many efforts the ministry organized to improve relationships.

“One reason we started the Tate Street Festival was as a way to get the street people and the merchants and the university and the police all kind of working together on something that would build community rather than keep the tensions going,” Clark says, “because there was a lot of tension down there.”

Clark had already seen the danger of what can happen when tensions spin out of control. Another event the Ministry for Social Change had organized about the time of the first Tate Street Festival was Day in the Park, a political rally at Lake Daniel Park that ended with tear gas and handcuffs.

A police officer confiscated a bag of marijuana from a biker’s saddlebag, which the biker and several witnesses maintained was planted there by the police.

“The next thing I knew all hell had broken lose,” Clark says. “It was people being beaten, slammed against police cars on the road, tear gas, and as a result, we had a series of hearings where we had a police review board to look at these kinds of things.”

Fortunately, Tate Street Festival fared much better. Clark remembers a musician and several street people were searched by police at the first festival, but no arrests were made.

“Tate Street has always been successful mainly because there were witnesses,” Clark says. “When you have an event like a Day in the Park, in which you had hundreds of counter-culture people, you’re not going to have merchants, regular street traffic, and you don’t have witnesses.”

The success of Tate Street Festival continued until the early 1980s.

There are several gaps in the festival’s annual history, but Coggins says the event was later revived in its autumn incarnation by Amelia Leung, who ran the former Hong Kong House restaurant. Leung retired and, in 1998, handed the reigns to Matt and Ann Russ, owners of Tate Street Coffee; siblings Becky and Emily Patterson of Sisters Jewelry & Gifts; and Michael Driver, who ran the now-defunct Crunchy Music store. Four years ago, control of the festival was given to Coggins.

“I have found other people to drive that train, and I just want to ride on it,” Matt Russ says. “I’ve got plenty to do running a business, a farm and everything else.”

Long after the street people community has largely disappeared, Tate Street Festival still promotes tolerance and a sense of community by giving people of all ages, ethnicities and walks of life an event they can enjoy together. For this reason, even though the festival does not attract the large crowds it once did in the 1970s, Clark considers it an ongoing success.

“The reason I see Tate Street Festival as a success now is that it’s bringing people in from the community to Tate Street.”

With the growing responsibilities of managing the Holy Ghost Tent Revival, a Greensboro band that is touring nationally, Coggins says that she, like her predecessors, is almost ready to pass the torch. Fortunately, for the hundreds who attend each year, she won’t leave Tate Street Festival until someone is ready to take over.

“I started organizing it because everyone else is too busy,” Coggins says. “If somebody else doesn’t do that, then I am pretty much returning to the place where I started.”

What: Tate Street Festival, an outdoor street festival featuring arts and crafts, as well as live performances by House of Fools, the Othermothers, Eating the Invaders, Now You See Them, the Brand New Life, the Firelight Saga and more.

Where: Tate Street between Walker Avenue and Spring Garden Street