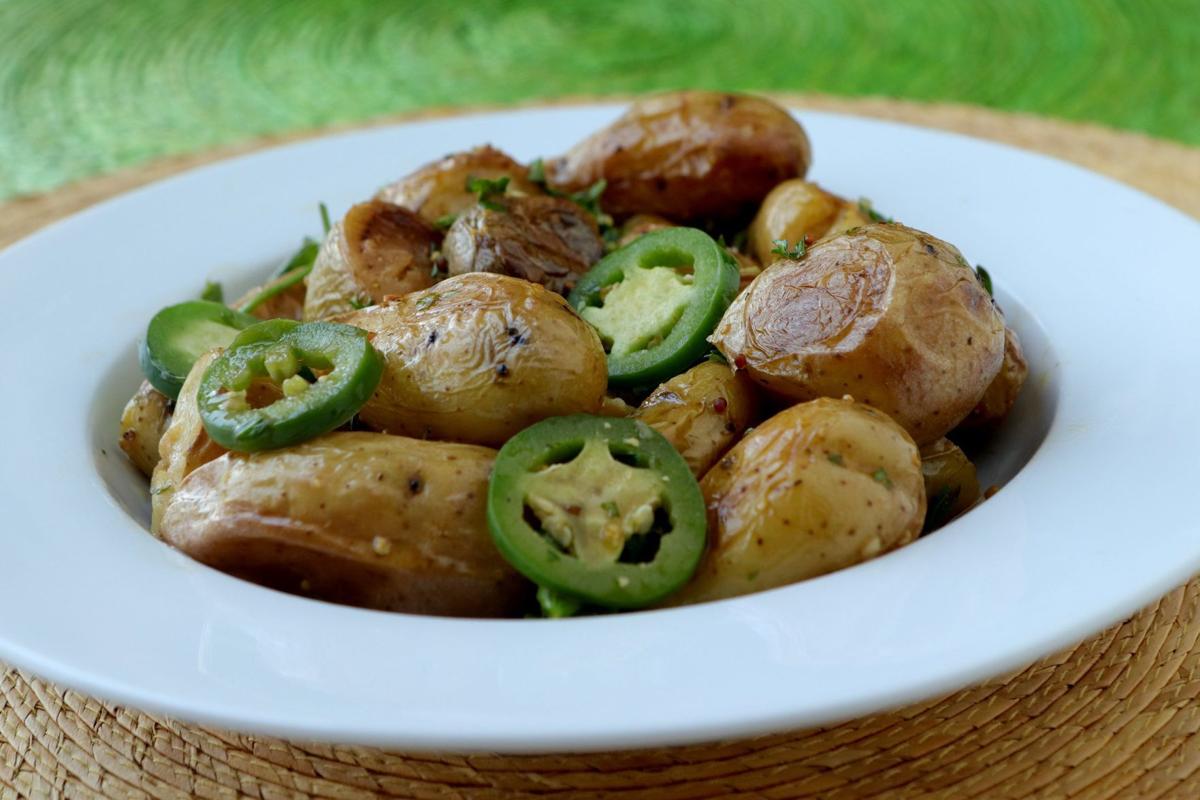 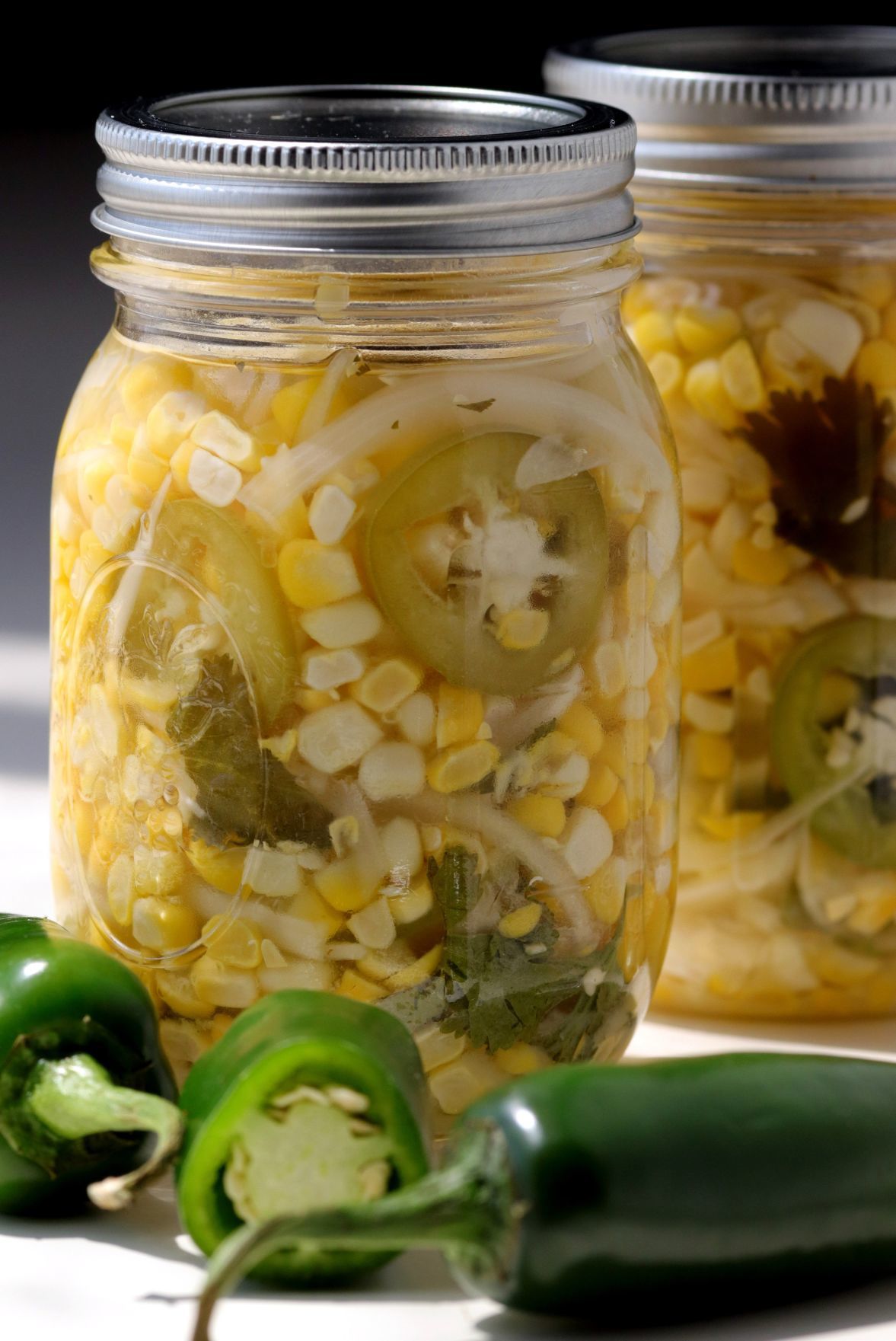 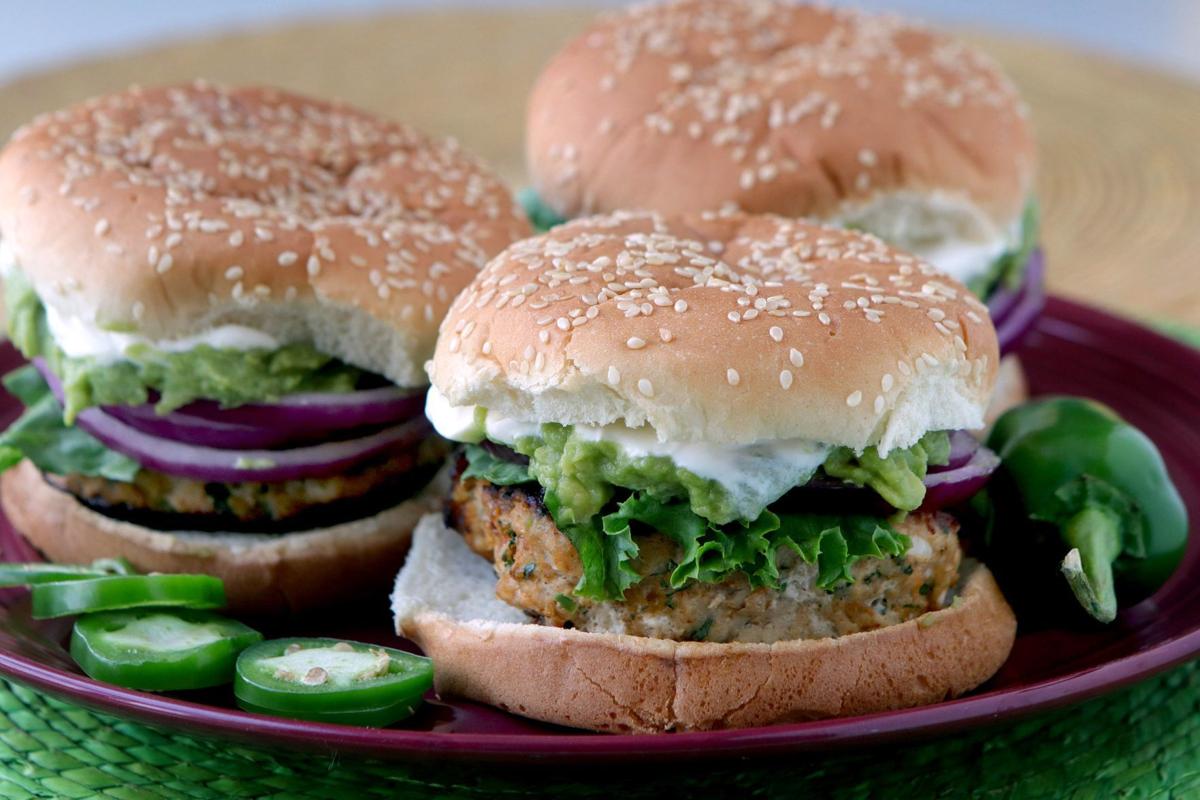 Find the recipe for the cheddar jalapeño chicken burgers with guacamole, and other recipes such as green hot sauce, inside on page D5. 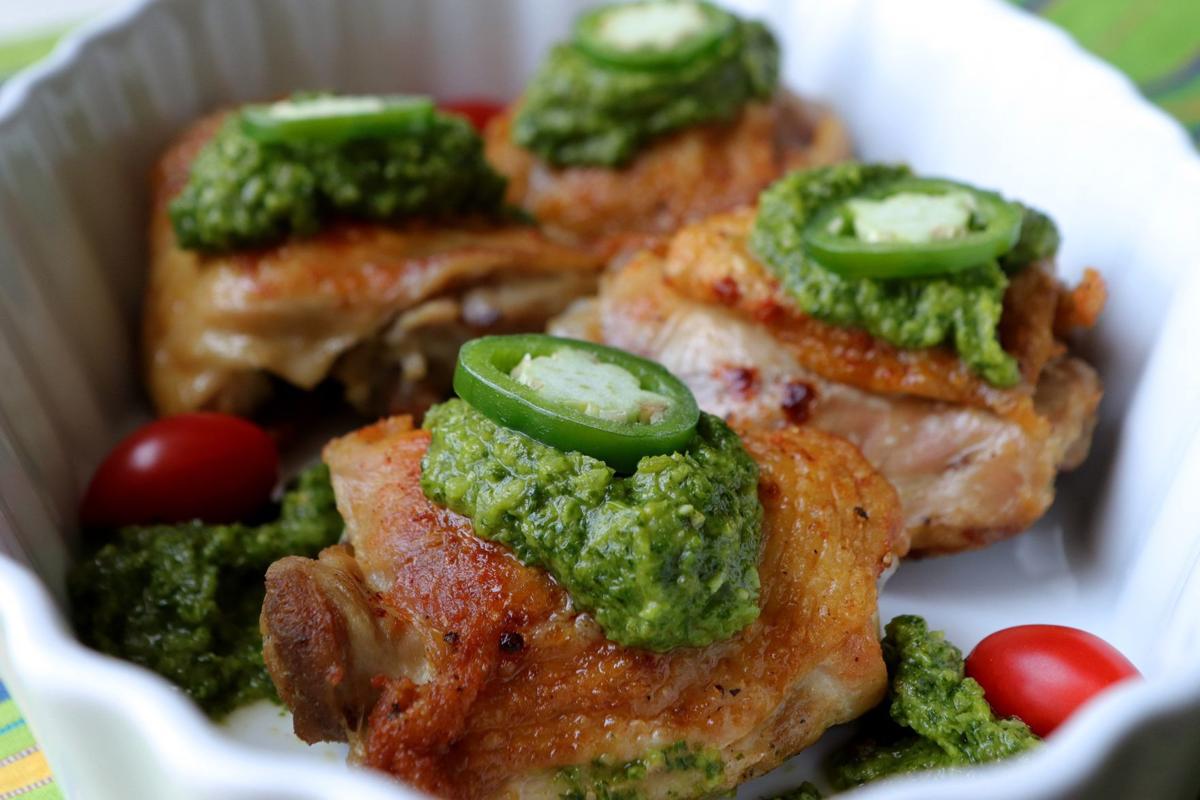 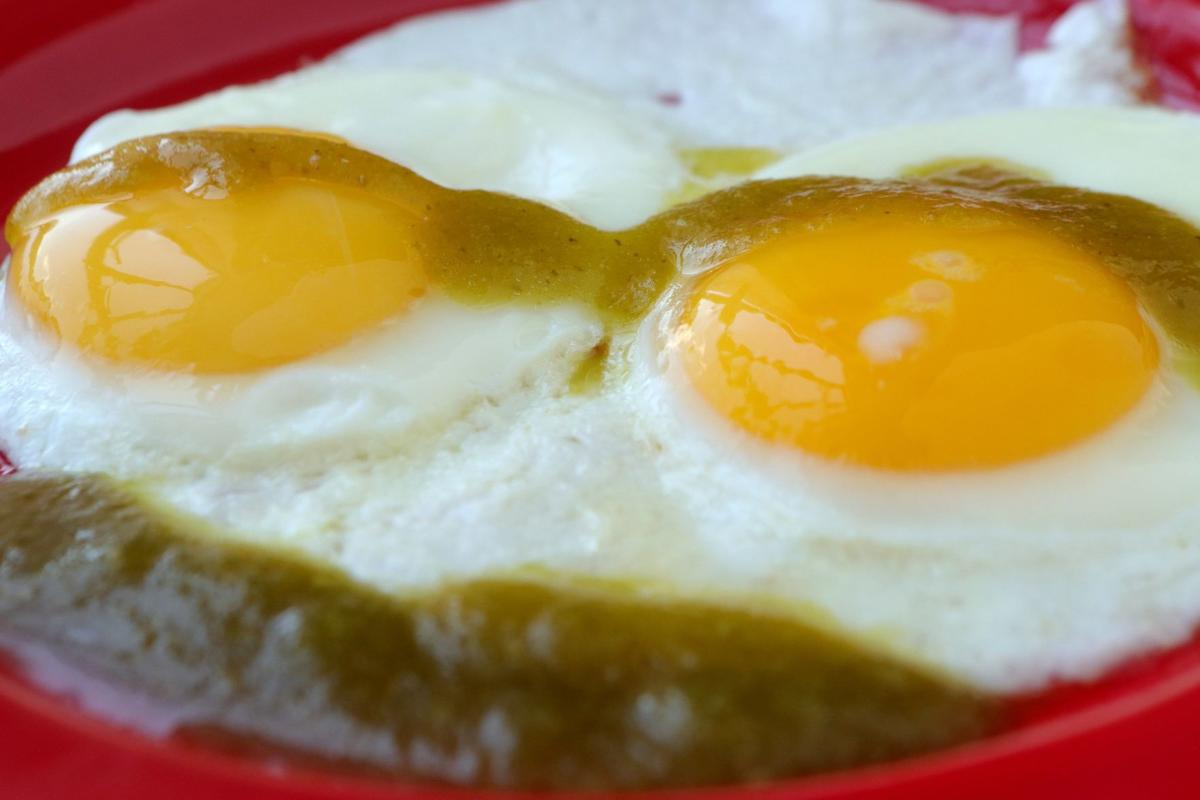 Green Hot Sauce dresses up sunny side up eggs.

Find the recipe for the cheddar jalapeño chicken burgers with guacamole, and other recipes such as green hot sauce, inside on page D5.

Green Hot Sauce dresses up sunny side up eggs.

With due respect to Mrs. Gump, my mama always said life was like a box of jalapeños: You never know how spicy it is going to be until you bite into one.

And that’s the problem with jalapeños in general. You could have two of the peppers side by side, identical in every way. You bite into one and it produces a pleasant, faint tingle on your tongue, like fairy dust. Then you nibble on the other and it melts your ears.

Jalapeños are a most inconstant fruit. So why do we love them so much?

Because they are just that good.

In my youth, I occasionally used to eat entire jalapeños raw. We all do stupid things when we are young, and that was one of mine. I didn’t enjoy it, but I thought I should.

Fortunately, I am older and wiser now. I take my peppers in smaller doses.

I also make absolutely certain to wash my hands thoroughly and then wash them again whenever I touch a jalapeño that has been cut open. That’s a mistake that you only make once.

I began my exploration of jalapeños by making one of my very favorite things, a green hot sauce that is overspilling with flavor and goes on everything from eggs to chicken to fish to even salads.

It’s simple to make, though it takes a little effort. What distinguishes this sauce from so many others is that it begins with a blend of green chiles, mostly serranos, but also jalapeños and Anaheims, to give layers of flavor to the heat.

But this isn’t an article about serranos, so I made a batch mostly out of jalapeños.

This version was brighter in taste, and sharper. It was also, um, impressively hot. Even so, it was so spectacular, so intriguingly flavored, so utterly addictive that two photographers and I made a healthy dent in the batch, even while complaining about the heat.

Still, next time I will go back to using more serranos and fewer jalapeños.

I also made jalapeño-Cilantro Pickled Corn which, for all its fancy name, is just corn relish with a little bit of a kick.

What it does have is a delightful, fresh flavor, with just enough acid in the pickling liquid to give it a little bit of an edge. The taste is summery and mild, because it is a quick pickle (or as we like to call it around here, a quickle).

Some pickles can be harsh because they are over-pickled. But quick pickles, as the name suggests, are done quickly and are made in a weak brine. That allows the vegetables in this case, corn, jalapeño and onion to keep their flavors pure while still exhibiting an enjoyable tartness.

My next dish was a green harissa, which turns out to be almost entirely unlike a regular harissa.

Harissa is a staple of North Africa, a condiment used in vegetable dishes, on grilled meat, spread over fish, as a dip with bread, with eggs and more. A red paste, it is fiery hot with a pleasantly smoky flavor.

Gjusta’s Green Harissa, on the other hand, is mild and earthy in taste. It is almost like a pesto, with chopped arugula, cilantro and parsley, plus garlic and a single jalapeño. No wonder it has so little heat.

But it does have a solidly satisfying flavor. Though green harissa is unlike red harissa, it is every bit as versatile. You can use it in vegetable dishes, on grilled meat, spread over fish, as a dip with bread, with eggs and more.

I tried it with chicken, and it was terrific.

Because I was still hungry, I made Cheddar jalapeño Chicken Burgers with Guacamole, in which the jalapeño is mixed into ground chicken before being formed into patties.

This is another case where the particular jalapeño was on the (very) mild side. But the burgers were marvelously flavorful because of all the other good things that were also mixed into the patties: onion, garlic, cilantro, cumin, paprika and shredded cheddar cheese.

You can’t go wrong with all of those ingredients blended into a chicken burger (for beef, I’d leave out the cumin and paprika), and it is even better when you top it with guacamole, a slice of red onion and sour cream.

And if you happen upon a jalapeño that actually has a kick to it, the burger would be better still.

I still wasn’t done, so I made an absolutely lovely side dish, Smashed Fingerlings with jalapeños.

Here, the fingerlings (they’re small, finger-shaped potatoes) are first baked. While still warm, they are tossed in a simple vinaigrette made from olive oil, whole grain mustard and sherry vinegar (you could also use red wine vinegar, but the sherry vinegar makes it sublime).

The jalapeño is added at the end, in thin slices. It adds a nice little counterpoint of heat.

But frankly, the dish is glorious enough without it. If you don’t like it hot, just leave it out.

1. Prepare a grill for medium heat (or use a skillet with a little oil on it).

3. Form the mixture into 4 (½-inch thick) patties. Cook burgers over medium heat until cooked through, 5 to 7 minutes per side. Serve each patty in a burger bun topped with sour cream and guacamole and any additional toppings needed.

1. Preheat broiler. Line a rimmed baking sheet with aluminum foil. Place chiles on prepared baking sheet and poke holes in each one with a fork. Broil 10 inches from broiler until tops start to blacken, about 5 to 10 minutes. Flip and broil until tops start to blacken, another 5 to 10 minutes. Place in a bowl and cover with plastic wrap at least 15 minutes.

2. Wearing gloves (seriously wear the gloves), remove the skins, the stems and many seeds as possible. Place in a food processor or blender along with the vinegar, salt, lime juice and honey. Process until smooth, about 1 minute.

Based on a lost recipe

1. Fill a large bowl with ice and water. Cook corn in a large pot of boiling water until just cooked through, about 2 minutes. Set in ice bath to cool. Drain; cut kernels from cobs and place in a large bowl. Add onion, jalapeño and cilantro, and mix well. Transfer mixture to jar or jars.

2. Bring vinegar, salt, sugar and 2 cups of water to a boil in a small saucepan, stirring to dissolve the salt and sugar. Pour hot brine over mixture in jar, and cover. Let cool, then chill. Will keep in refrigerator for 2 months.

1. Preheat oven to 450 degrees. Toss potatoes with ¼ cup of the oil on a rimmed baking sheet; season with salt and pepper. Roast until golden brown and tender, 30 to 35 minutes. Let cool slightly, then lightly flatten.

1 jalapeño, halved, seeds removed from 1 half

1. Preheat oven to 350 degrees. Toss onion, tomatillo, jalapeño and garlic in 1 tablespoon of the oil on a rimmed baking sheet. Roast, tossing once, until vegetables are soft, 12 to 15 minutes. Let cool.

2. Place vegetables in a food processor along with cilantro, parsley, arugula, vinegar, lemon zest and remaining ½ cup of oil. Puree until smooth. Cover and refrigerate for up to 3 days.

Shape of things: As city planners map out Greensboro's future growth, they know that nothing is certain

It's time to make progress on the Piedmont Greenway, backers say

Ed Hardin: State falls on its face, loses to Carolina again in a fading rivalry