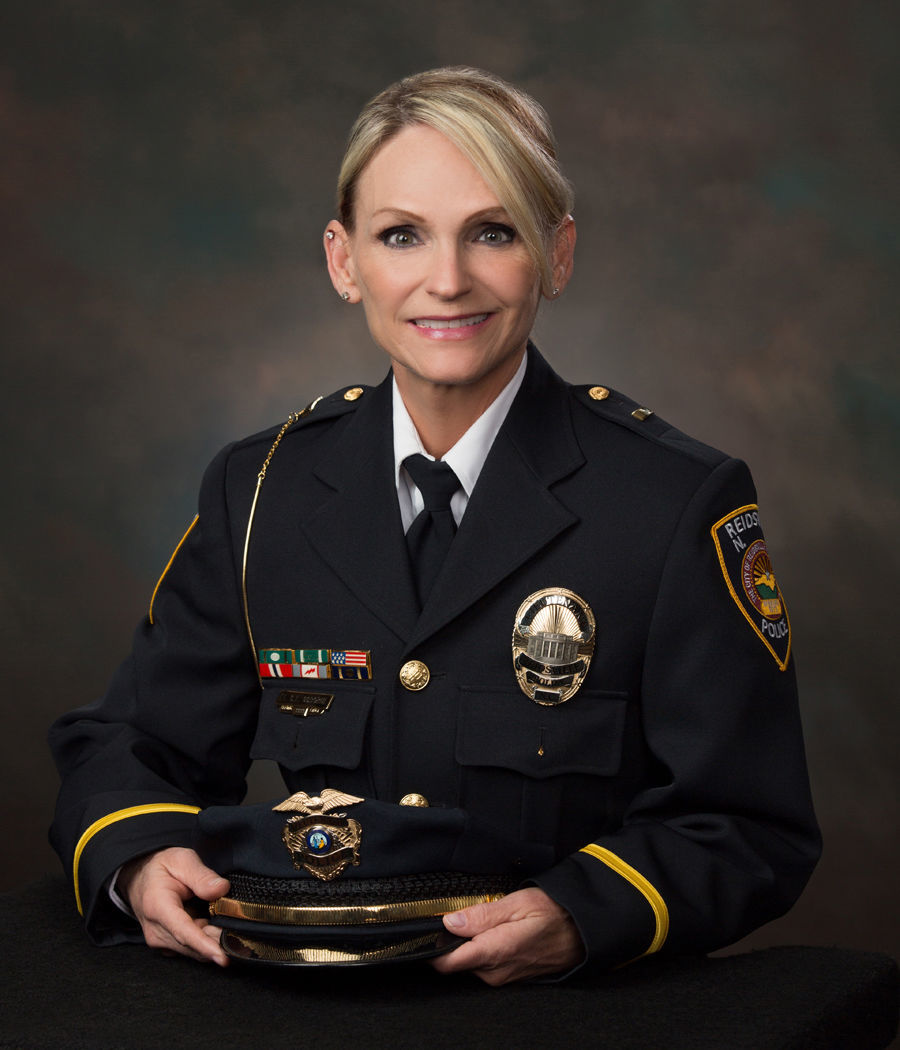 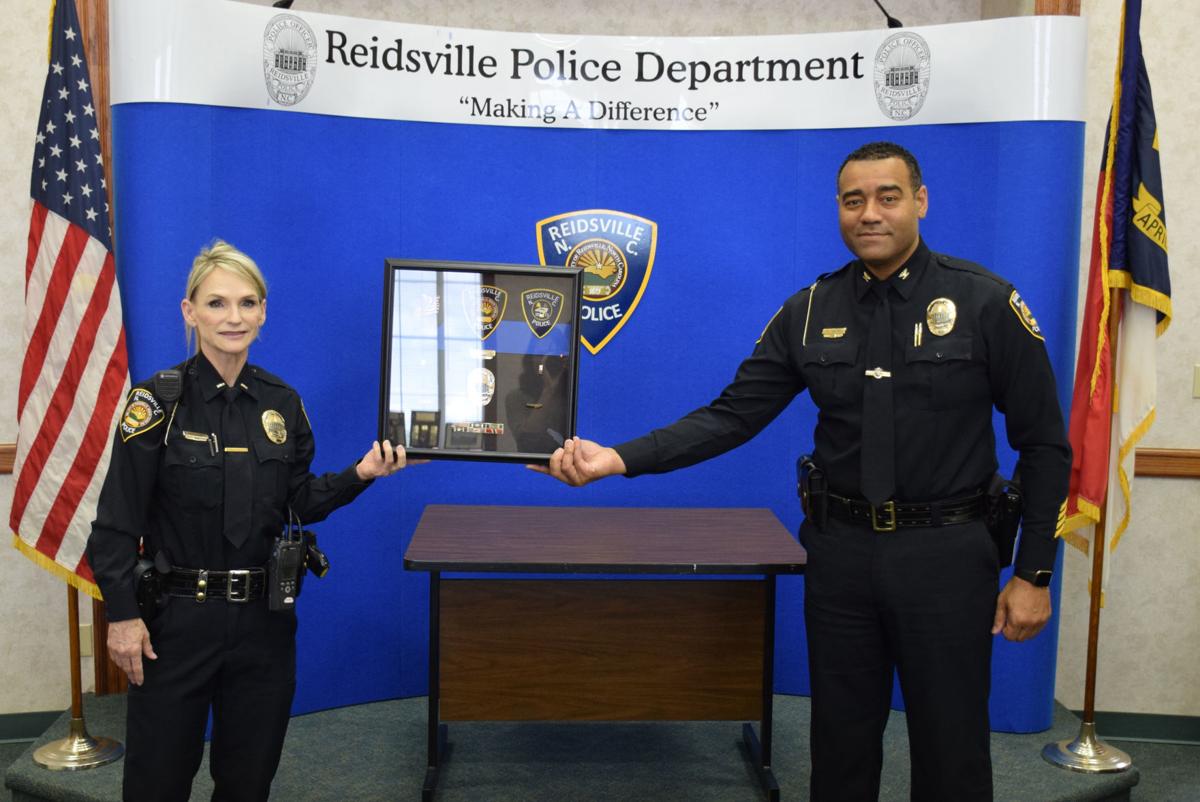 Chief Robert Hassell presents Lt. Cathy Osborne framed mementos of her career during her retirement ceremony at the department. 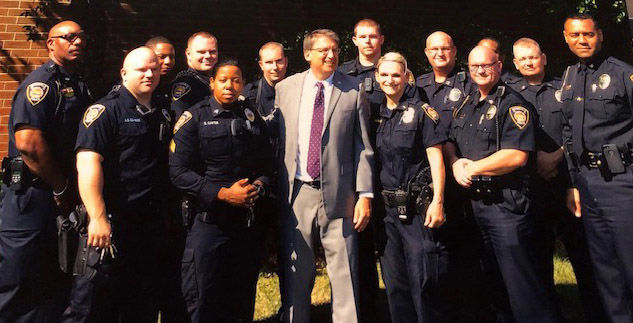 Chief Robert Hassell presents Lt. Cathy Osborne framed mementos of her career during her retirement ceremony at the department.

REIDSVILLE Cathy Osborne clearly remembers the first traffic stop she made on her own as a rookie officer at the Reidsville Police Department.

After beginning work on Feb. 22, 1999, Osborne rode with her training officer, Sgt. David Frizzell, for the first four months under the watchful eye of shift Lt. Bruce Needham.

Her shift was doing a seatbelt campaign, so when she saw a driver without one, she turned on her blue lights and siren.

“My legs were shaking. My hands were shaking,” Osborne said. “It wasn’t that I was scared. It was just being out there on my own and stopping my first car. I remember that vividly.”

Twenty-one years later, on May 31, Lt. Cathy Osborne signed off her final shift to begin her retirement. The communication center’s airwaves were suddenly filled with fellow officers, including Chief Robert Hassell, bidding her farewell and wishing her the best in her retirement.

“It is with great honor and recognition that I congratulate Lt. Cathy Osborne on her retirement,” Hassell said in a written statement last week. “Her selfless dedication and commendable efforts touched and changed many individuals in our organization and community. With gratitude and appreciation, I thank her for her unwavering service of excellence to public safety within the Reidsville Police Department.”

Deputy Chief Ronnie Ellison agreed, saying “It was my pleasure to work with Lt. Cathy Osborne in her 20 years of service with the Reidsville Police Department. She was an officer of high integrity and had a true servant’s heart.”

Now, Osborne said will take “a little vacation” to the beach with her husband, Curtis, but won’t be out of uniform for long. She hopes to go to work soon for the U.S. Marshal Service at the federal courthouse in Winston-Salem.

“I really believe in justice and taking up for people that have been wronged,” she said. “So when I started looking for a career, I looked at law enforcement. It’s such an honorable profession.”

After graduating in 1998, Osborne was working for the GTCC campus police when Reidsville Police Lt. Bill Roland called in 1999 and offered her a job.

Things were not always easy for Osborne. When she first started, law enforcement was just beginning to accept women, she said.

“Going to an all-male basically dominated profession, I felt like I had to show that I was capable and as able to do this job as anybody else,” she said.

In her early days, while on patrol, Osborne remembers being dispatched to a domestic scene and spotting someone fitting the suspect’s description walking down the street.

“I stopped him and was talking to him, trying to wait for backup,” she said. But, the man kept going.

“When I went to place him under arrest, a struggle ensued and we were scuffling in the middle of the road,” Osborne said. Officer John Pulliam quickly helped her detain the man.

While at the magistrate’s office, Osborne realized her badge had fallen off during the scuffle. Although she and other officers went back to look for it, “we never did retrieve that badge.”

Six months after starting work, Osborne was assigned to the department’s tactical team and worked there for several years before becoming a narcotics detective. Her job included undercover work.

Asked about her husband’s feelings when she was working undercover, Osborne said “he was kind of worried about it and didn’t really want me to do it. But, he knew it was something I wanted to do and knew I was capable.”

After returning to patrol duties, Osborne served as acting sergeant for a while before being promoted to sergeant in June 2012. Three years later, she was made lieutenant.

The most prideful assignment Osborne attained was in 2016 when Hassell appointed her as commander of the special response team. She had been on the team since 2012.

“I always kept my phone on and always answered my phone in case I was needed to go anywhere at a moment’s notice,” she said. The job required her to be on the scene in an hour but it took her only 45 minutes to get there from her High Point home.

“Working a 12-hour shift and spending another two hours driving to and from work … a 12-hour day turned into a 14-hour day for me,” Osborne said about her schedule.

Now, that grueling schedule is behind her and she looks forward to having more time to spend with her children, Tony and Angie, and five grandchildren.

In her spare time, Osborne works out frequently and enjoys kick-boxing. About a year ago, a friend invited her to a kick-boxing class and “I fell right in love with it and I’ve been going every since.”

As she looks back on her career, Osborne said she would encourage today’s youth to “Follow your dreams. Don’t let anyone tell you you can’t do it.”