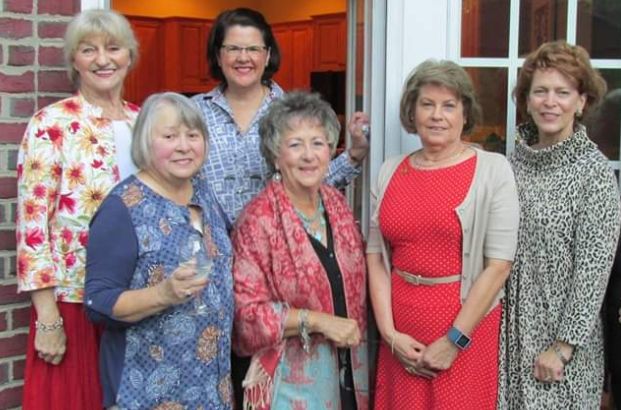 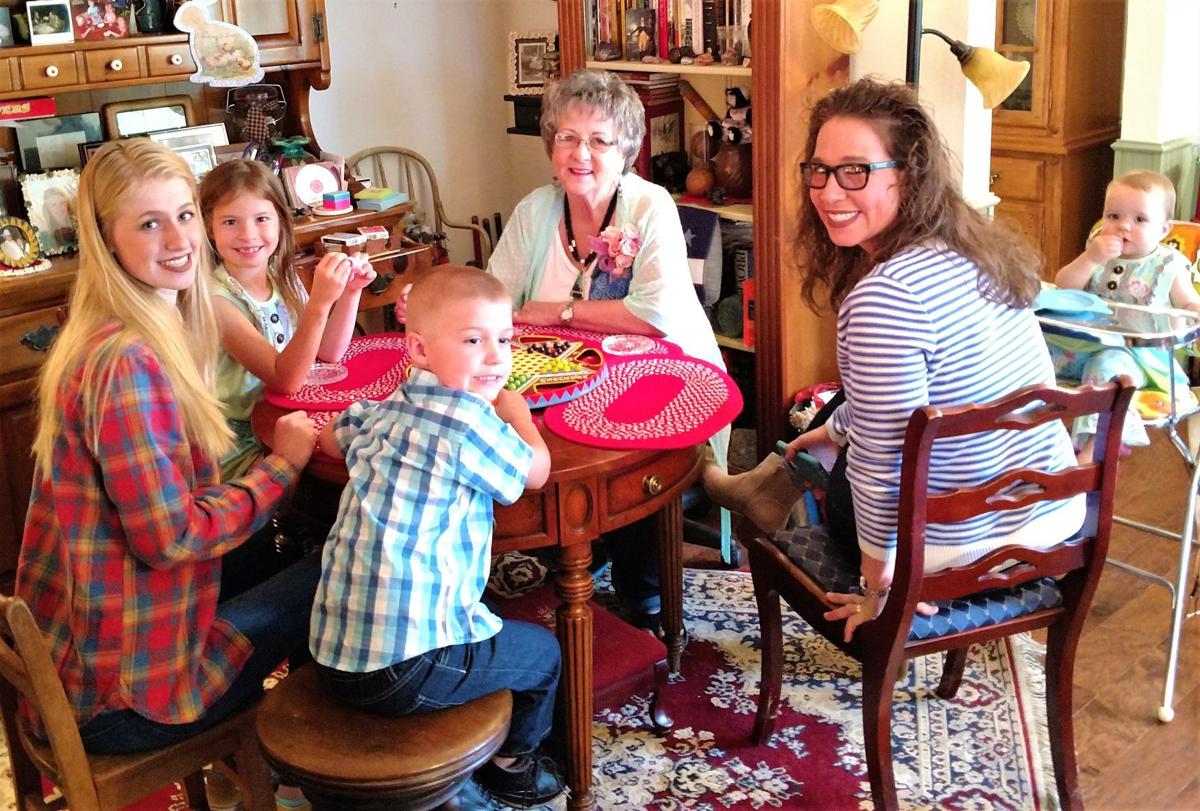 Etta Reid enjoys her daughter, Sarah Graham, and grandchildren with a game of Chinese checkers, a good strategy game for problem-solving and social skills.

Etta Reid enjoys her daughter, Sarah Graham, and grandchildren with a game of Chinese checkers, a good strategy game for problem-solving and social skills.

I found a way to connect with my longtime friends without risking safety measures. I have been purging closets during these few months and found a treasure of photos of social events not too far back with my friends.

It’s amazing how viewing the photos gave me a lift, so I decided to pull the group back together and work on a project for my article. I emailed my friends and asked them to share something about their father and what effect he had on their life. I told them they could write a few sentences or more. I think you will find it fun and even uplifting, something we all need right now.

Dot Freeman: One of my earliest childhood memories, before age 3, was the excitement in our large poor family when a family Bible was delivered — the shock that Papa would spend so much money ($20) for a book! He said, “Every family needs a Bible and I’ve never read it.” So he did just that, from cover to cover, after working all day in the furniture factory and evenings doing farm chores. It was too heavy to hold, so it lay on the dining room table as it was being read. I remember Mama carefully recording our birth dates in it. It was, and is, a family treasure! (Dot is a retired professional educator.)

Ann Mueller: My dad, Ed, was a career military officer. He led an infantry platoon at the Battle of the Bulge, deployed to Korea right before I was born, and served for a year in Vietnam when I was in middle school. As you can imagine, my parents expected a certain level of discipline and achievement from my siblings and me. We did not always live up to these high expectations and it typically fell to my mother to apply corrective guidance. In the third grade it did not surprise me that my parents were horrified by my poor results on spelling tests, but it did surprise me that Dad appointed himself my full-time spelling coach. Every night after dinner we would work on the list of spelling words from my third-grade class at Patch Barracks Elementary School in Stuttgart, West Germany. The words were hard! I remember specifically “antique,” “bureau” and “lieutenant.” These are words I think many adults today would have trouble spelling. Nevertheless, my father persisted. My tears were of no use and I finally realized that the only way to escape what I privately thought of as ‘spelling torture time’ was to actually learn to spell. The few weeks we spent doing this served me in good stead. I never again had trouble spelling and ended up with a career that included teaching high school English, proofreading legal documents and composing detailed technical treatises. Never needed spell check — thank you, Dad.

One odd thing though is that Dad always had a smile on his face no matter what he was doing, even something as painful and boring as drilling an unappreciative subject in spelling. I asked him once, “Dad, how come you are always smiling?” He replied, “I need to squint to hold my face on.” I thought that was the silliest answer ever, but I appear to have inherited this trait. At work occasionally someone comes upon me trying to suss out a particularly gnarly problem and asks, “What’s so funny? You have a huge smile on your face!” (Ann is a retired government executive.)

Virginia Kerr: My father would often give money to people he barely knew and my mother would find out and would not be happy about it. However, when he would explain the person’s emergency problem, she would forgive him. He taught me to be charitable. (Virginia is the founder of Court Watch of North Carolina.)

Etta Reid: We used to drive to the lake in the early 1950s and stay for the week in my uncle and aunt’s rock cabin, which was next door to their large farm house. My uncle had a card table set up under a big shade tree and it is there that he taught my dad strategic moves in playing dominoes. They sat for hours in the shade while my sister and I looked on or played with my Aunt Pearl’s many kittens.

Our family was already into puzzles and Monopoly, but this added a new dimension to our family after we became teenagers and married. You see, my dad passed the strategies on to a few that carry on this “torch” of winning. I have special memories of my small family with my sister’s family, gathered at my parents’ home with a game table set up predominantly near the fireplace. All our children experienced dominoes with my parents. The table remained a fixture and was never removed until 2015.

I cherish their dominoes and even a few of the score pads with my dad’s familiar stroke for scorekeeping. My own young grandchildren continue the tradition in my own home with games of Uno, “Slap Jack,” Chinese checkers and last but not least, the game of dominoes. My dad lives on.

Linda Branch: My father, Maxcy McCown, took me fishing the day my mother came home from the hospital with my baby sister. I was 3 years old. This was the first of many fishing trips. The one I remember best took place when I returned home after my freshman year at Winthrop College. We drove to his favorite fishing spot, Big Lake, in his 1946 Willys Jeep very early in the morning and spent several hours in his small rowboat on the lake catching bream and crappie and catching up on family news. Later that summer, he wrote a letter about that day to enter a contest in The Charlotte Observer, and he was the first week’s winner and also the grand prize winner at the end of the contest. He received an electric trolling motor and a Zebco push-button fishing rod that he gave to me. I used it for many years and still have it in my garage. I also have a copy of his winning letter and many wonderful memories. (Linda is a retired professional educator.)

Julee Johnson: My dad was a good-looking Steve McQueen kind of guy — a farmer, a bank president, a man with high expectations and lots of energy for fun, as well as hard work. My earliest recollection of riding with Daddy without my siblings was on an old red Farmall tractor back on the old Casey homeplace. I was about 4 years old. We putt-putted along, row after row, and finally stopped under a tree to share a Pepsi and some Boston baked beans. Daddy noticed a bird’s nest and lifted me up to see four little babies with their beaks wide open. He pretended to feed them, then fed the candy to me. I was his baby bird.

I remember a ride on his Harley one summer afternoon when I was 14. I was sure everyone was so envious of us on that motorcycle — way too cool!

We rode up toward Raleigh and stopped at Hardee’s for a Coke and fries.

“Mama’s probably making ice cream right now,” he said. “Better not tell her we stopped for something to eat.”

The last time I rode with Daddy was a month before his death. We were in my truck and he insisted on stopping and buying gas for me. He would always give me a “Primitive Baptist handshake” when I came home for a visit — always a $20 bill for gas money.

I’ve ridden roller coasters, bicycles, ferries, tractors, many trucks and cars with Daddy over the years. He always made me feel special — made me feel as if I could always count on him to take care of me.

About three months after his death, I was having a really tough day — crying, wandering aimlessly about, mourning his loss, when Daddy seemed to whisper, “Let’s go for a ride.” I hung his black jean jacket on the seat beside me and drove to the farmers market, where I talked to farmers, and bought pumpkins, apples and Daddy’s favorite coconut candy. When I got back home I spent the rest of that sunny, crisp afternoon working in the yard and talking to Daddy. He took care of me … once again. (Julee is a retired professional educator.)

Etta Reid is an educator, historian and researcher. Contact her at etreid@aol.com.