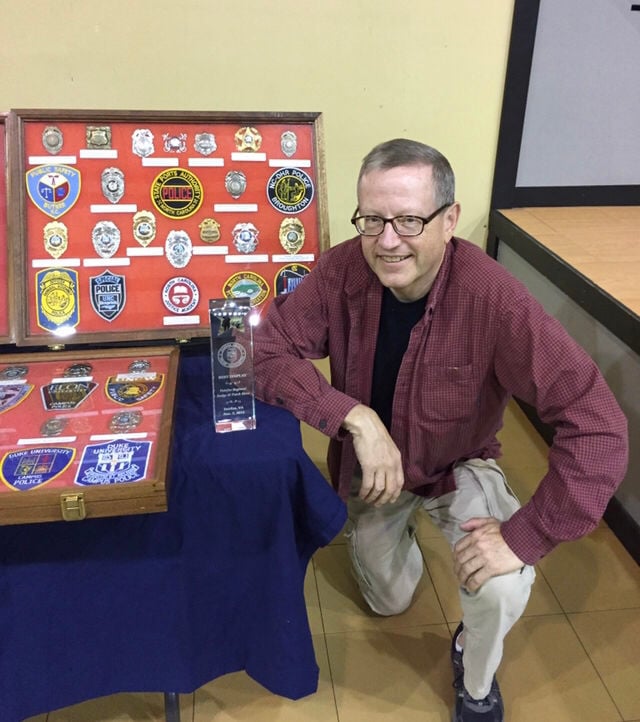 Jim Thomas poses in front of police collectors’ show display in Fairfax, Va. in 2019. He started the collection in the late 1970s. 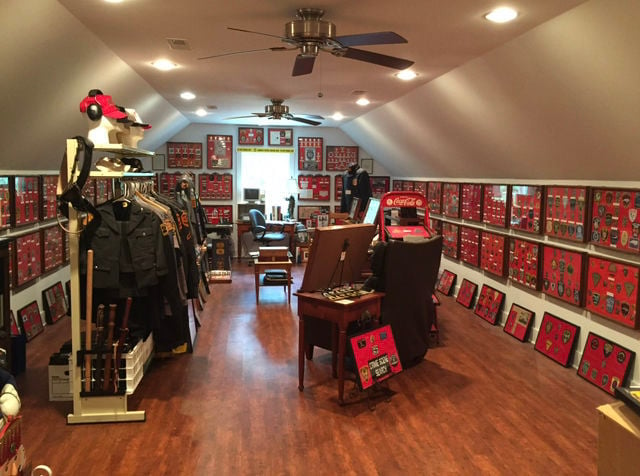 Jim Thomas displays his badges, patches and other memorabilia in a special room at his home in Virginia. 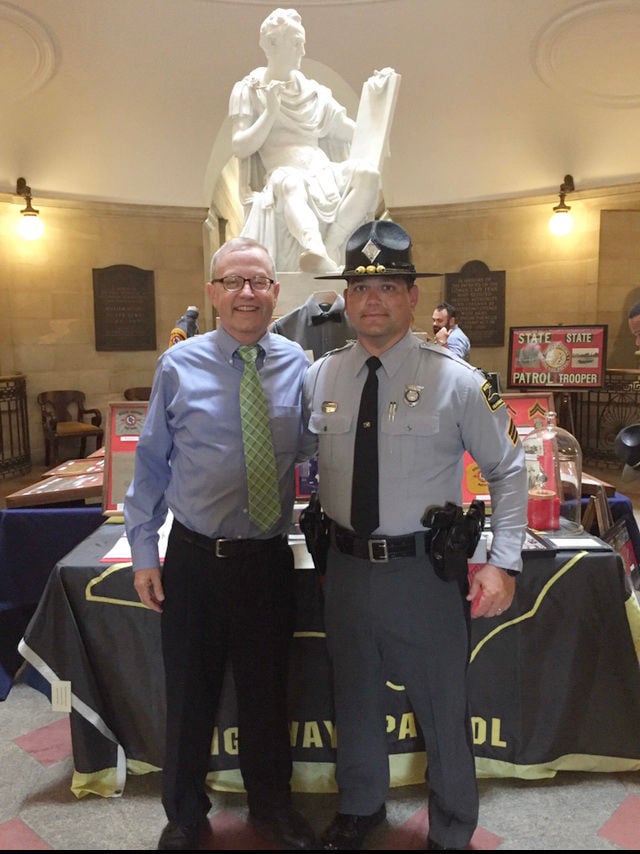 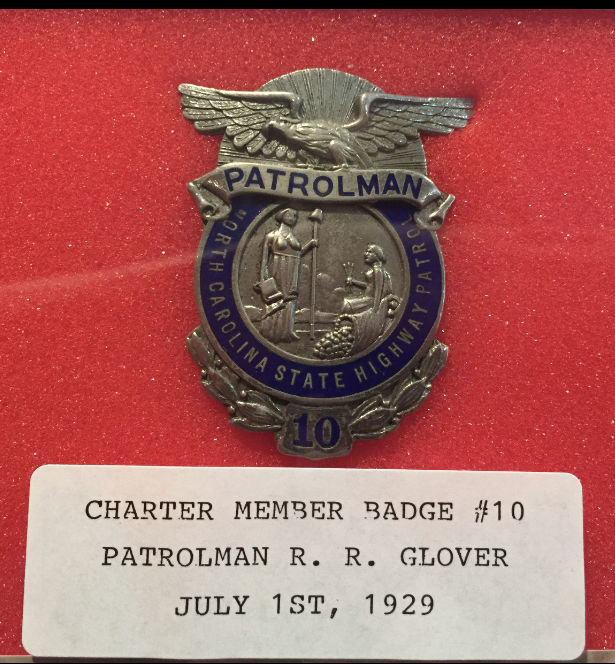 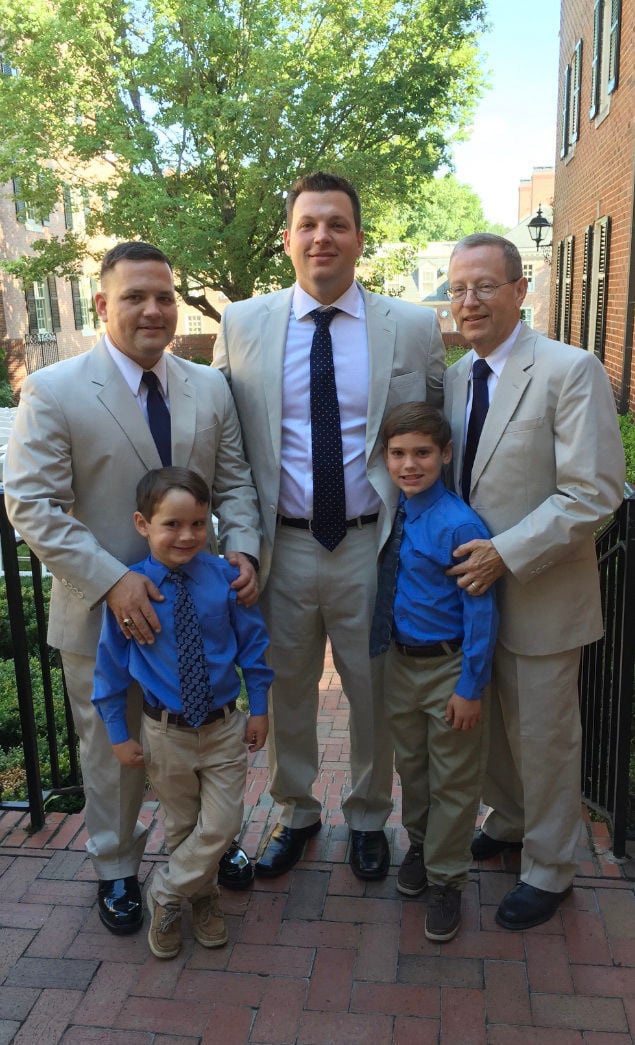 Jim Thomas, right, with his sons Josh, left, and Jeremy along with grandsons, in dark blue shirts, are Harrison, now 11, left, and Weston, now 13. 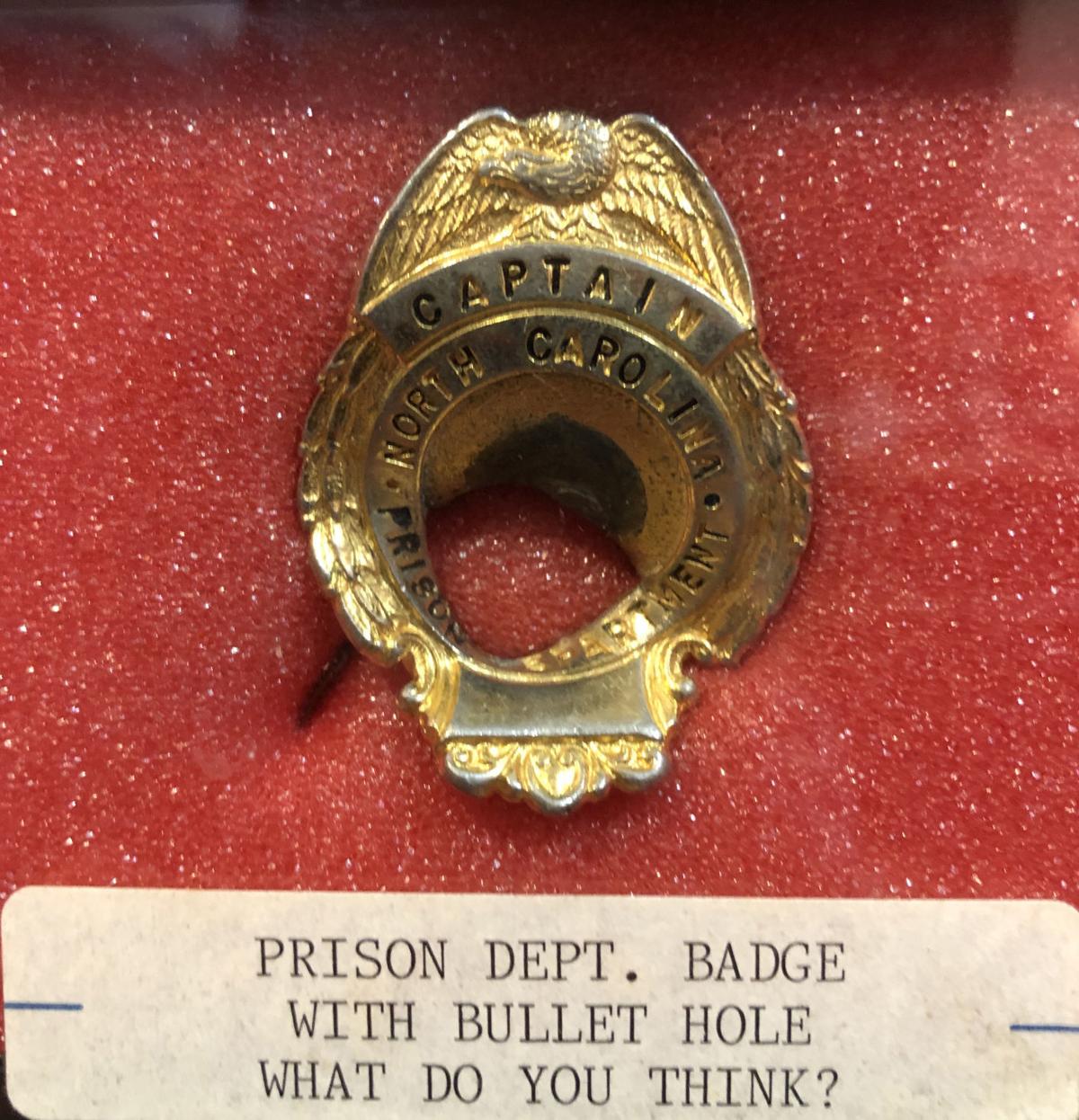 A captain’s badge from the NC Prison Department with a bullet hole. 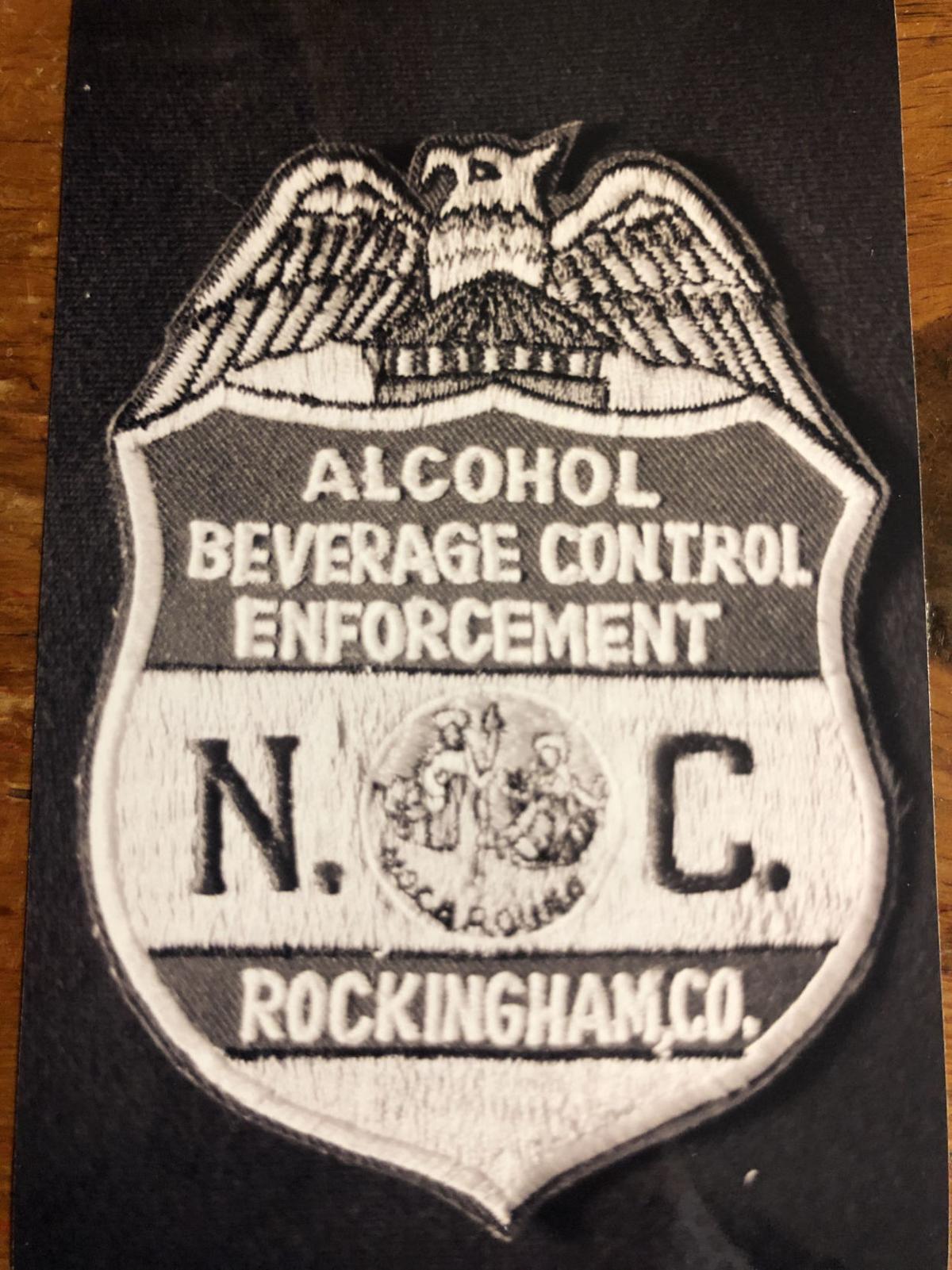 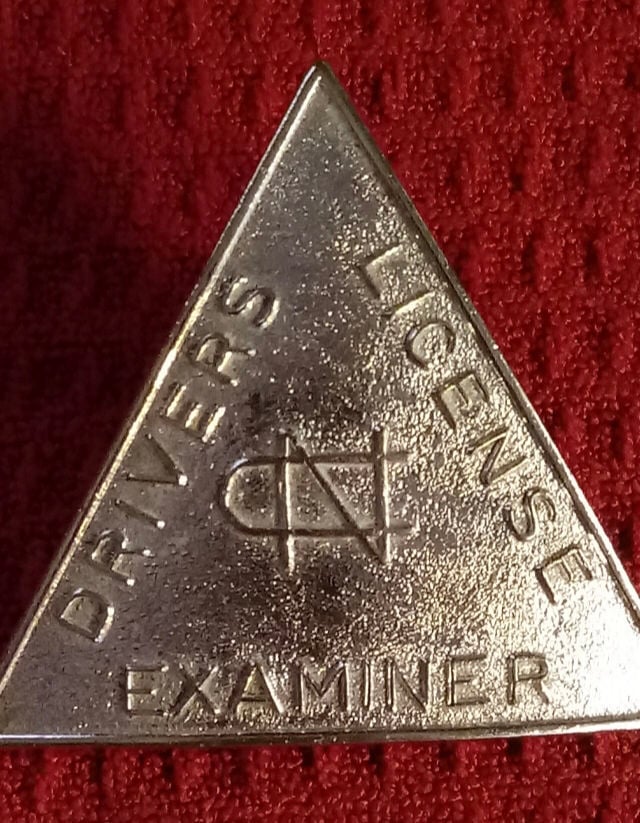 The triangular hat badge of an N.C. drivers license examiner. 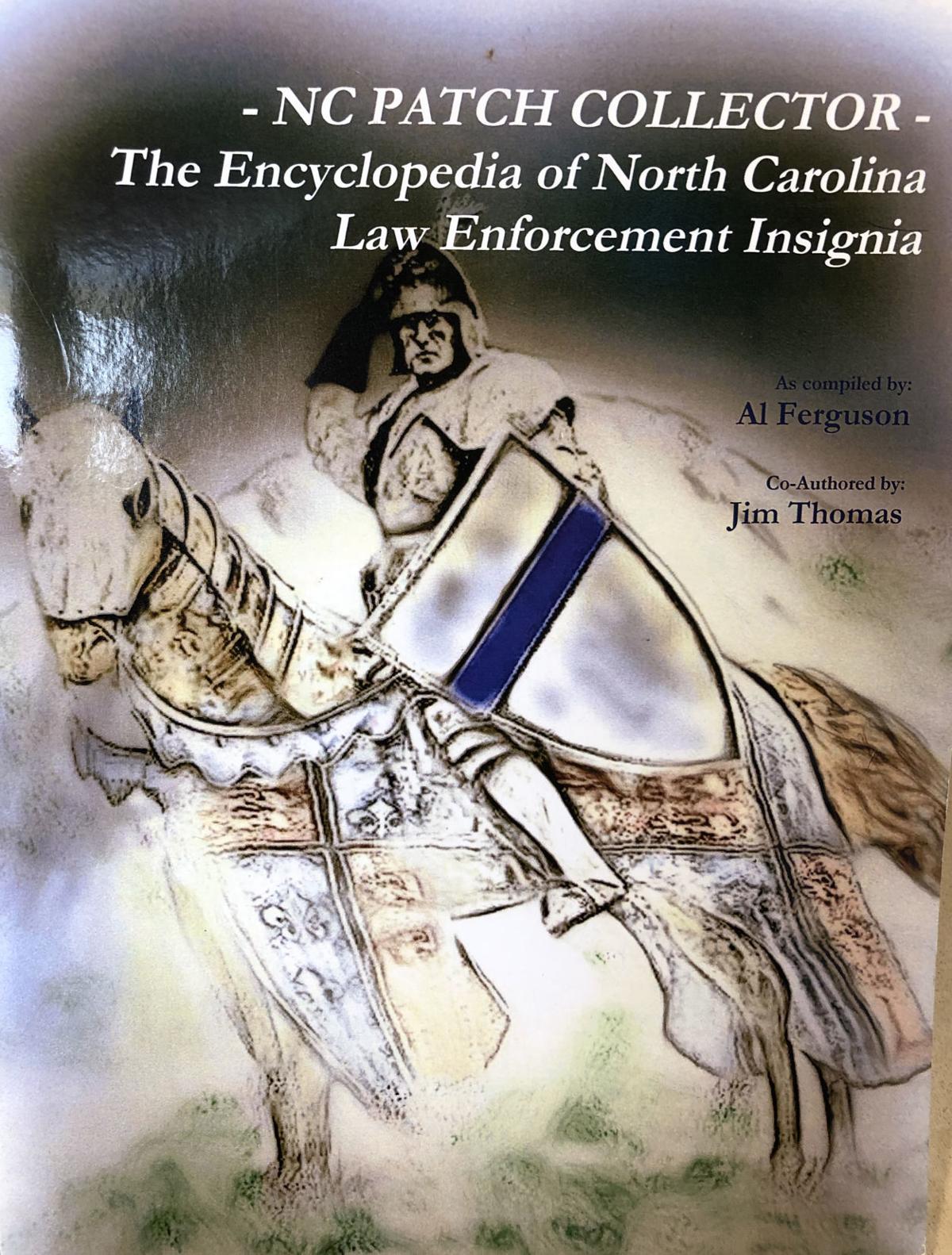 “The Encyclopedia of North Carolina Law Enforcement Insignia” is available to be printed on demand by lulu.com.

Jim Thomas poses in front of police collectors’ show display in Fairfax, Va. in 2019. He started the collection in the late 1970s.

Jim Thomas displays his badges, patches and other memorabilia in a special room at his home in Virginia.

Jim Thomas, right, with his sons Josh, left, and Jeremy along with grandsons, in dark blue shirts, are Harrison, now 11, left, and Weston, now 13.

A captain’s badge from the NC Prison Department with a bullet hole.

The triangular hat badge of an N.C. drivers license examiner.

A collection of police patches and badges Jim Thomas started in the late 1970s while a Henry County Sheriff’s deputy is now on display at his Prince George County home in Virginia.

“I wanted it all to have a home so all these families and officers that shared their history with me and the future generations could see the heroes who worked Rockingham County law enforcement,” he said.

In 2012, Thomas co-authored the first definitive work on N.C. law enforcement patches with High Point Police Department Lt. Al Ferguson. “The Encyclopedia of North Carolina Law Enforcement Insignia” is a 161-page paperback with more than 2,700 color photos available to be printed on demand.

Thomas’ N.C. State Highway Patrol memorabilia collection of the patrol’s history is one of the most comprehensive collections that exists today, according to a NCHP blogger Kristen Barber. It includes framed photographs, uniforms, license plates and even an engraved pocket watch from a former commander. He hopes to one day donate it to the patrol museum in Raleigh.

For the patrol’s 90th Anniversary Celebration in 2019, Thomas set up his display inside the State Capitol rotunda.

As a 21-year-old deputy in Henry County, Thomas began collecting patches from fellow Basic Law Enforcement Training (BLET) school officers and those with whom he worked investigations. That led to his contacting departments all over the country to exchange badges.

Many law enforcement, emergency management and public safety members collect patches as well as challenge coins, badges and other memorabilia.

After joining the Eden Police Department in 1978, Thomas began specializing in North Carolina patches and badges. He now has at least one badge from every sheriff’s department in the state.

The Norfolk, Va., native said his father was a Methodist minister and several members of his father’s church were in law enforcement.

“As a young-un, I always looked up to and respected them,” Thomas said. “I always thought it would be a great career.” That led to his first job with the Henry County Sheriff’s Department three years after graduating in 1973 from Prince George County High School.

While at the Eden Police Department, Thomas was appointed a Rockingham County magistrate by Judge Metzler A. “Pat” Morgan in 1985. When Thomas retired 22 years later, he was the senior magistrate.

Since he worked third shift as a magistrate, he became a substitute teacher for five years in the Eden schools, working every day except when he was in court.

“When I substituted, a lot of teachers asked me to relate experiences about court systems, police departments and the court system in general,” Thomas said. He began taking patches and badges to the children, who “really, really loved it. So many of the children had family members that had been or were police officers.”

“It snowballed and I got involved with trying to collect all the state agencies,” he said. “It got big. My goal at that point was to get one badge from each of the law enforcement agencies in Rockingham County, and all the state agencies such as the State Bureau of Investigation, Alcohol Law Enforcement, and the highway patrol.”

Soon, Thomas began talking to family members and retired officers and did a lot of research. When he told them he was using them to promote law enforcement as a career, they gave him badges, patches and even uniforms and hats.

“When the collecting got really serious, I went trying to find all the patches that were used by all the agencies and as many badges as I could,” he said.

Over the years, Thomas traveled to police collectible shows all over the country: Las Vegas, St. Louis, Indianapolis, Boston and more.

“I meet other collectors and have friends nationwide that are into collecting,” he said.

At his first national show in Boston, Thomas won Best of Show for his North Carolina display.

During a show in a Myrtle Beach about 25 to 30 years ago, Thomas met Capt. Ivan Stroud, a member of the N.C. State Highway Patrol command staff.

The captain told Thomas he had “more stuff than our Hall of History,” and invited him to set up at the Retirees’ Day at the Training Center.

“It was a phenomenal reception,” Thomas said. “I met a lot of troopers and learned a lot.”

Since then, he has done dozens of displays for the highway patrol. In the early 2000s, Thomas was invited to display at the International Chief of Police Association at Charlotte Motor Speedway attended by more than 10,000 officers. Since the patrol was hosting the event, Thomas’ display featured highway patrol artifacts.

“I really delved into the history of the highway patrol, and have an example of almost every single badge that has ever been issued,” Thomas said.

The highway patrol was formed July 1, 1929, and Thomas has the badge of R. Glover, a trooper in the original group of 27 patrolmen, nine officers and the captain (commander). He got it from a descendant of a patrolman who had worked with Glover.

The most prized badges Thomas has date back to 1921 when the first state Department of Motor Vehicles was formed to enforce automobile laws with six “automobile inspectors.”

“I have two of the first six,” he said, noting they belonged to L.E. Griffith and W.E. Koonce. One was given to him from the estate of one of the officers, and the other, he found in Iowa on eBay. Another eBay find was a first-issue forest service Forest Warden badge from 1915.

Each badge represents a story, Thomas noted. Before becoming sheriff of Rockingham County in 1978, C.D. “Bobby” Vernon worked for the prison unit, first as an extradition officer and later as captain of the Wentworth prison department.

“One of most unusual badges is one that Bobby gave me — a prison department captain’s badge with a bullet hole through it,” Thomas said. “It really makes you think about how dangerous the job is.”

His oldest badge is a Leaksville Township badge from the 1870s.

Last summer, the collector found items from the late 1940s.

“I had no idea the hat badge existed,” he said, explaining that, in 1948 it became state law that everyone had to pass a driver’s license test to get their license. The first 102 driver’s examiners actually wore a triangular hat highway patrol badge that said “Examiner.” They worked under the N.C. Highway Safety Division. Thomas tracked the badge to a North Carolina collector and added it to his collection in January.

“It was just totally luck that I found it,” Thomas said. “I found badges in so many different ways, it was crazy.”

When he retired in 2007, Thomas returned to Prince George County. He now is married to Rebecca Lilley, a former high school classmate after renewing their acquaintance at a school reunion. Ten years ago, they opened “Sussex Cottage, LLC” in Sussex County, Va. They sell antiques, toys and furniture.

Thomas is the father of two sons, Joshua, a sergeant with the truck enforcement division of the N.C. State Highway Patrol, and Jeremy, an art teacher at Western Guilford High School, living in Greensboro. Joshua has two boys, Weston, 13, and Harrison, 11; and Jeremy, two daughters, Adeline, 3, and, Eleanor, born April 25.

How to buy: Go to lulu.com and enter "The Encyclopedia of North Carolina Law Enforcement Insignia" in the search field

Other: Jim Thomas said profits are donated to the Law Enforcement Officers' Memorial in Washington, D.C.