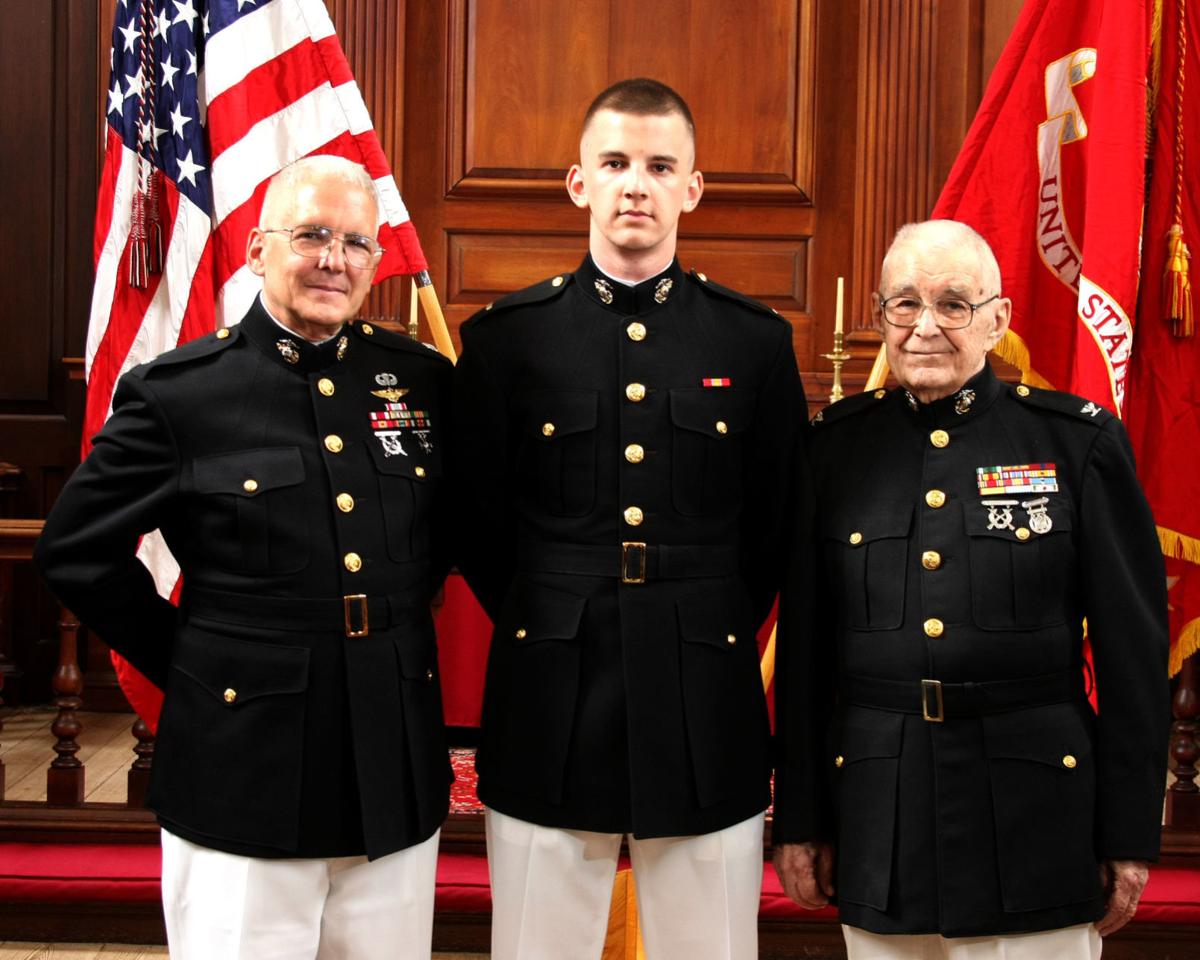 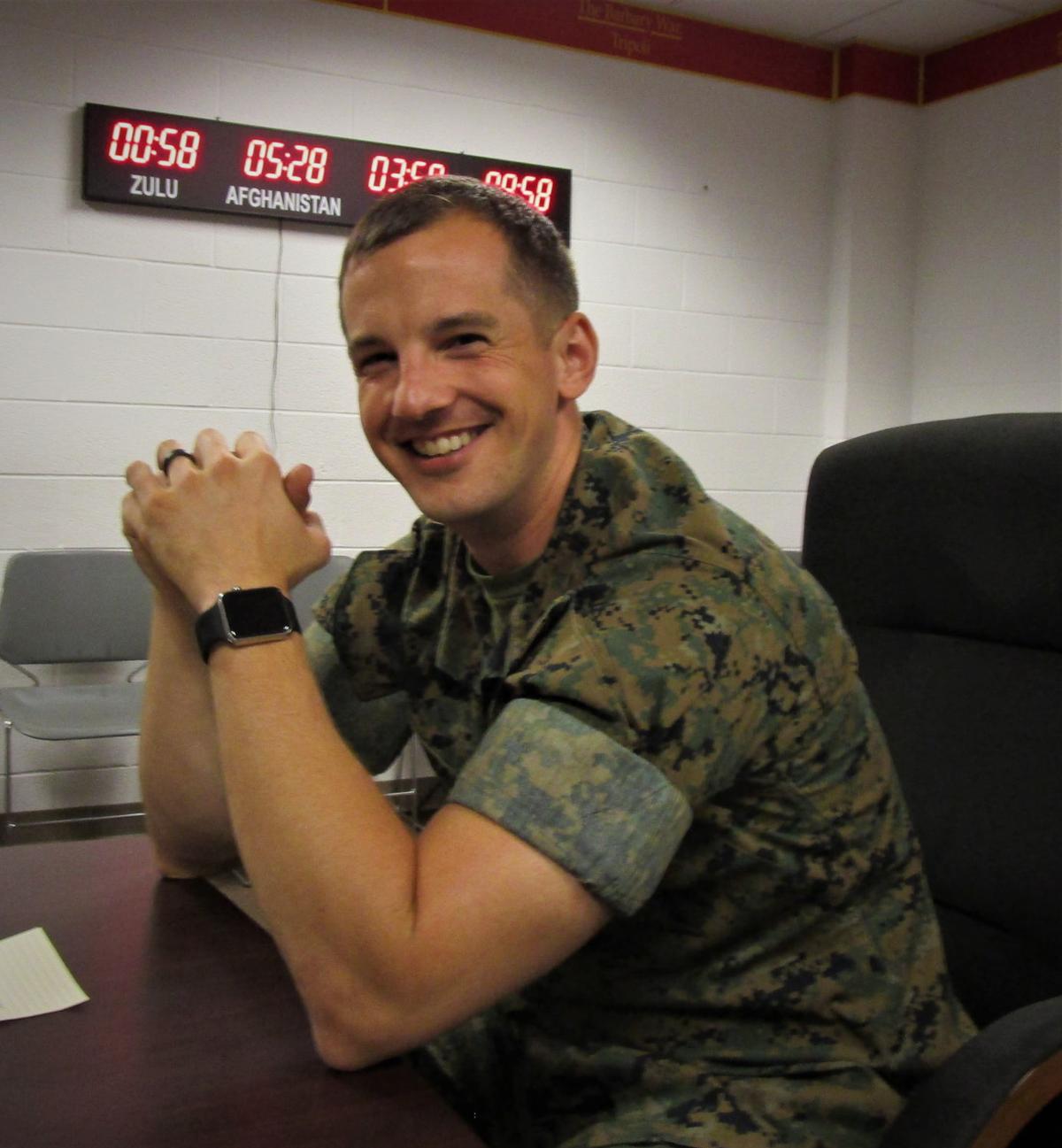 Col. Norako left a family challenge to his son, Lt. Col. Vincent Walter Norako, Jr. USMC (retired), and a grandson, then First Lt. Vincent Roland Norako, USMC, “there will be a Vincent Norako Marine for 100 years.”

Now a major — and based in Greensboro — the third Vincent Norako has more than 10 years of service. However, he needs 23 more years to reach the family challenge of 100 years. He also knows a 33-year tenure is generally limited to flag officers.

While Norako would be happy to retire with the stars of a general, he has a back-up plan. Vincent Roland Norako, Jr., was born July 25, 2019.

Maj. Norako assumed command of the Greensboro Marine Corps Reserve Center in August 2018. In addition to deploying to Afghanistan, he has been previously posted at Quantico, Camp Lejeune and Hawaii.

His longest assignment was on the staff of the Navy’s 7th Fleet. He credits that assignment as his most productive, “Our flagship, the USS Blue Ridge, was based in Yokosuka, Japan, but we made port calls throughout the Pacific. During a stop in Melbourne, Australia, I met a beautiful Australian lady who gave me a guided tour of her city.”

The sea-going Marine and the beautiful Australian lady, Elise Wishnowsky, stayed in touch. They were married at the National Museum of the Marine Corps in December 2015.

The elder Vincent Norako, a Brooklyn, N.Y., native, enlisted in the Marine Corps in 1942 and served as a wireman during the Okinawa campaign. According to his grandson, “Wiremen are no more — they are now classified as networking Marines, communicating via cyber, wire and other means.”

When World War II ended, Col. Norako was a staff sergeant and had been selected for Officer’s Candidate School. That selection became moot when Norako was among thousands of Marines discharged during postwar down-sizing.

According to his grandson, “My last communication with my grandfather was a Skype conversation from Afghanistan. He reminded me about the family 100-year program, ‘keep following orders!’”

In 1971, Col. Norako commissioned his son, Vincent Norako, Jr. as a second lieutenant in the Marine Corps. Twenty-six years later, he had the honor of reading that same son his retirement order.

In 2009, Col. Norako had the additional honor to assist his son (Vincent Norako, Jr.) commission his grandson (Vincent Roland Norako) into the Marine Corps as a second lieutenant.

And speaking of Lt. Col. Vincent Norako, Jr., he chose Marine Corps aviation instead of communications as did both his father and his son.

According to Maj. Norako, “Dad was commissioned in 1971. He started out in the infantry but always wanted to fly. After four years as an infantry Marine, he completed flight training and earned his wings as a helicopter pilot. He served a tour aboard the USS Guam and made three Mediterranean deployments.”

The major smiled when he shared other locations where his father had been posted, “He served three different assignments in Hawaii and three years in Paris as the United States Attaché to France.”

Maj. Norako and his two sisters grew up in Williamsburg, Va. and graduated from William & Mary University. His older sister, Leila Kathleen Ellis, is a professor at the University of Seattle. His other sister, Mary Jennifer Smith, served as a Navy JAG officer and married a former Navy Fleet Marine Force Corpsman.

Even if this bit of Navy heritage has entered the Norako line, I’m going with Vincent Roland Norako, Jr. as a Marine.

Harry Thetford is a retired Sears store manager and author of “Remembered,” a book about 99 former students of Greensboro Senior High School (Grimsley) who were killed during World War II. Contact him at htolharry@gmail.com or 336-707-8922.

How badly did the economic shutdown hurt Greensboro? Time will tell, officials say.

Ed Hardin: Are we seeing a new Kyle Busch emerge from the chaos?