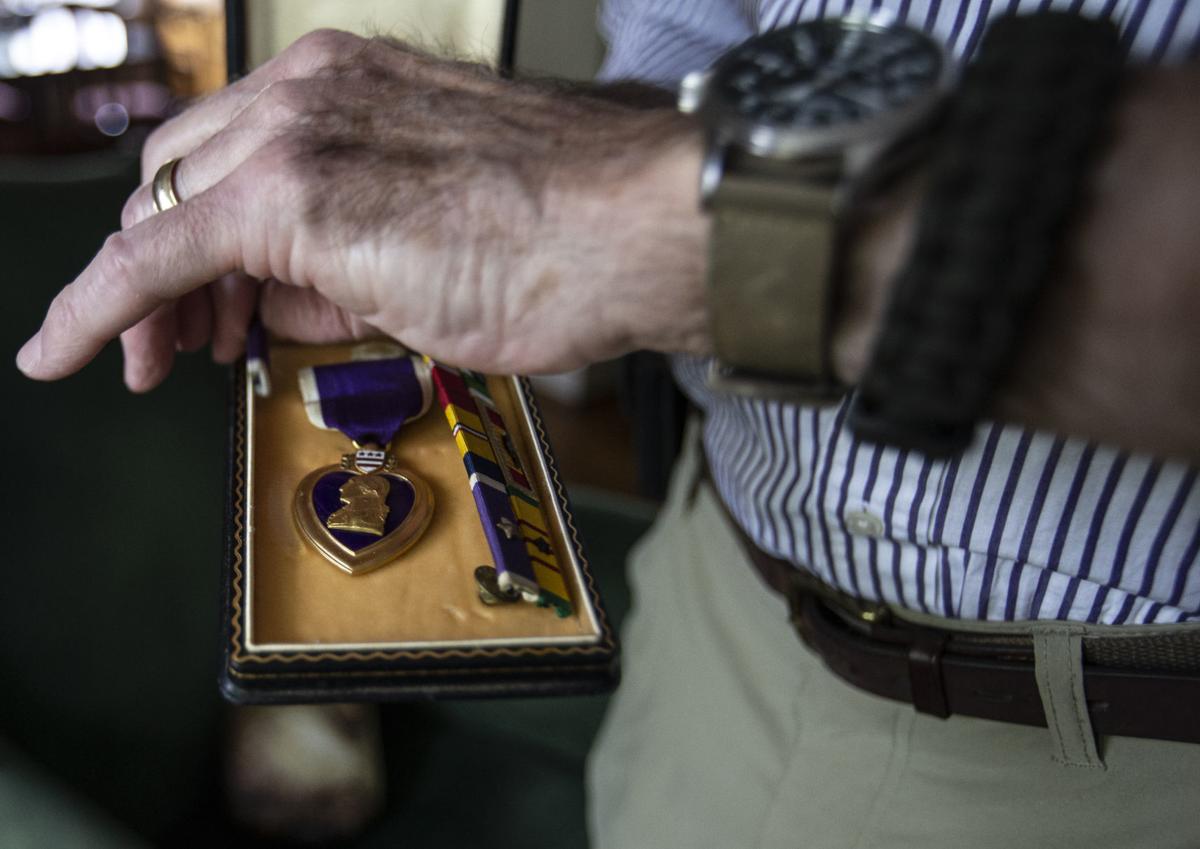 Tom Williams shows one of his Purple Heart medals at his home in Greensboro. Williams was wounded twice while on patrol in Vietnam, both times by booby traps. 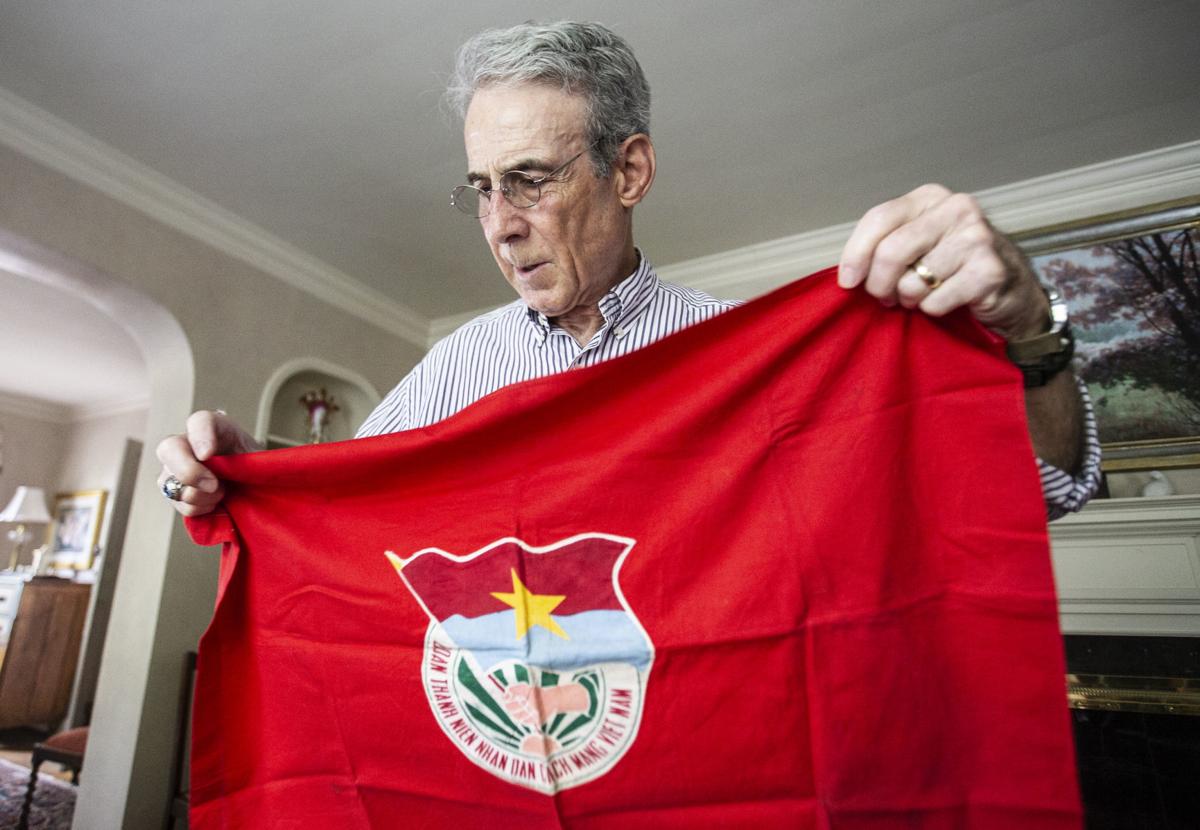 Tom Williams holds up a Viet Cong flag he brought back from Vietnam. 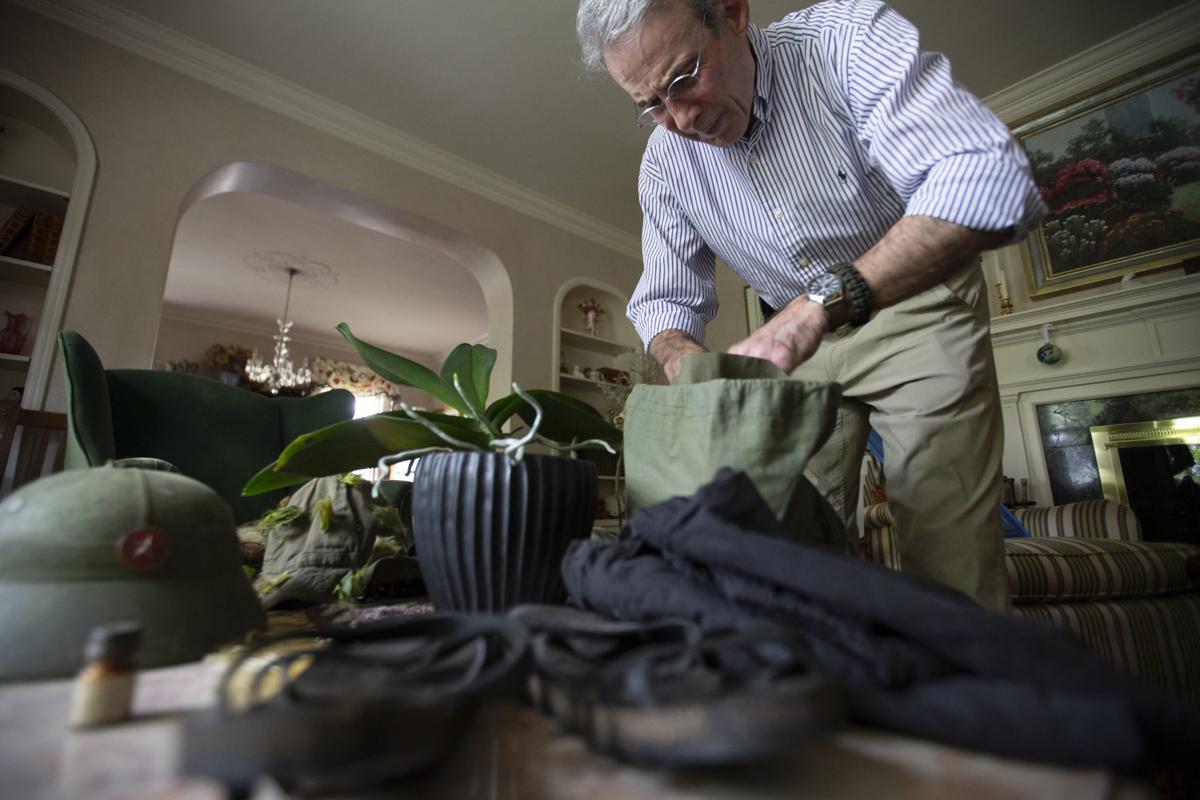 Tom Williams goes through some of his personal memorabilia from Vietnam in Greensboro, N.C. on Tuesday, October 16, 2018. 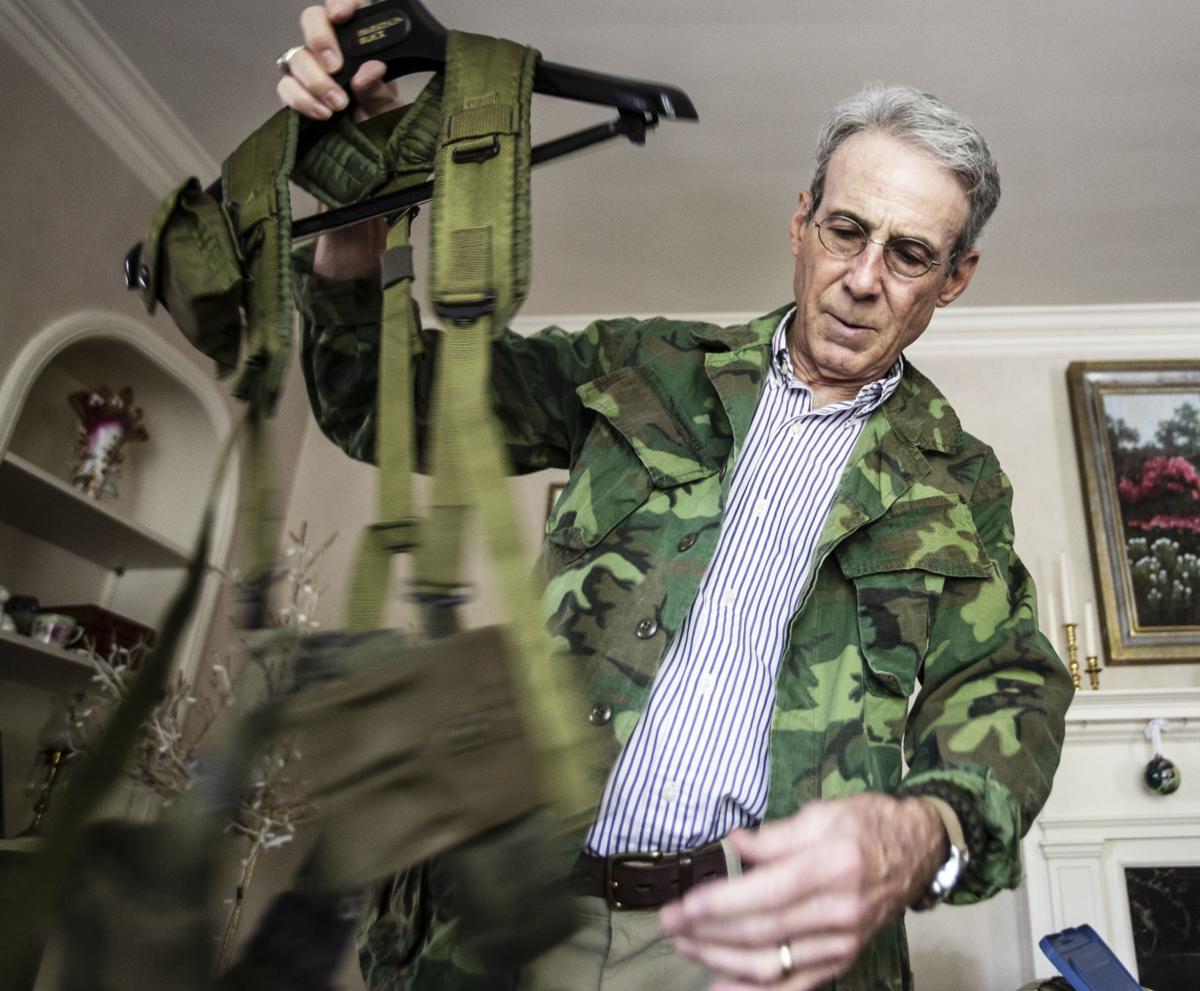 Tom Williams hold up his harness that he wore in Vietnam in Greensboro, N.C. on Tuesday, October 16, 2018. 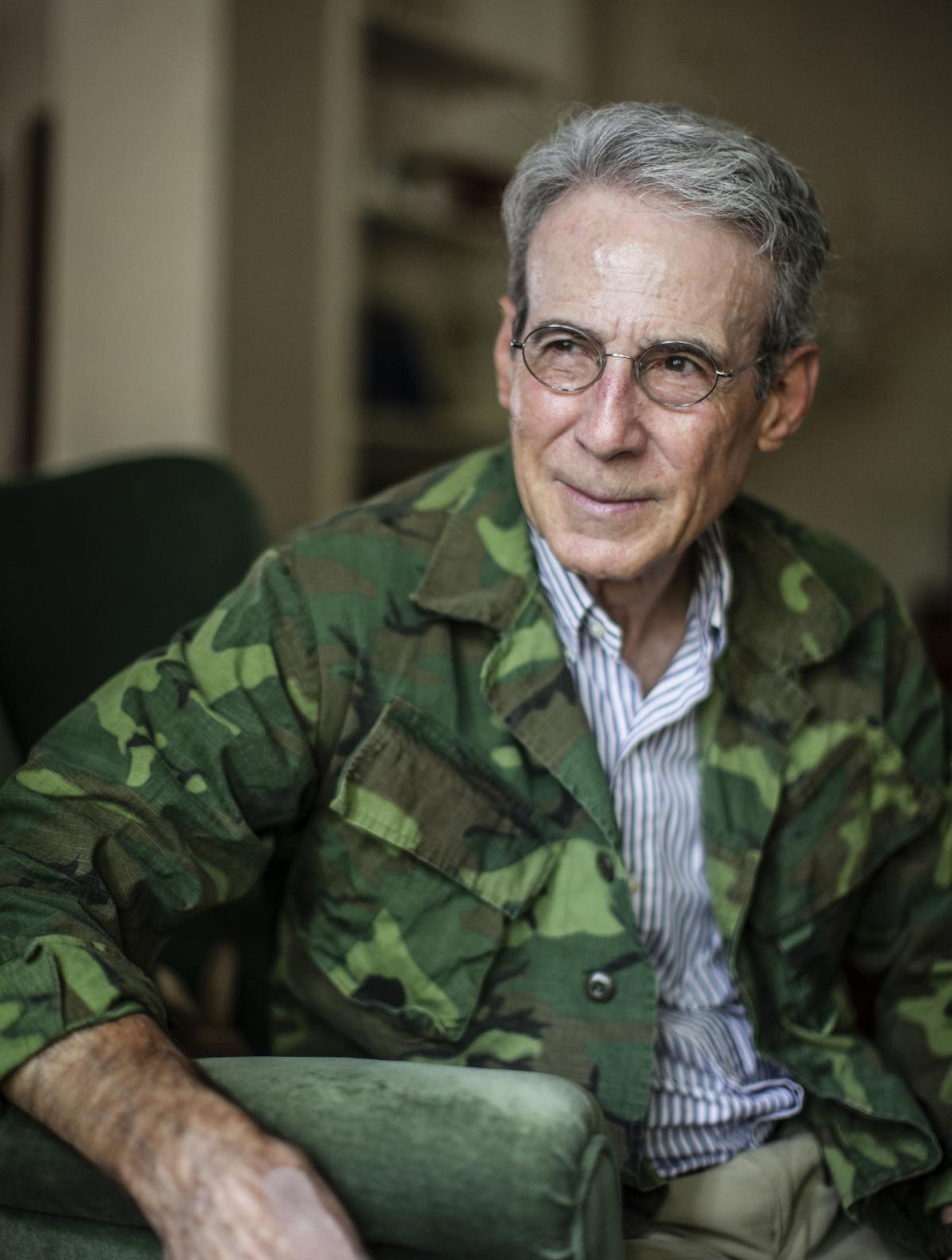 Tom Williams looks out his window while wearing his flack jacket from Vietnam in Greensboro, N.C. on Tuesday, October 16, 2018. 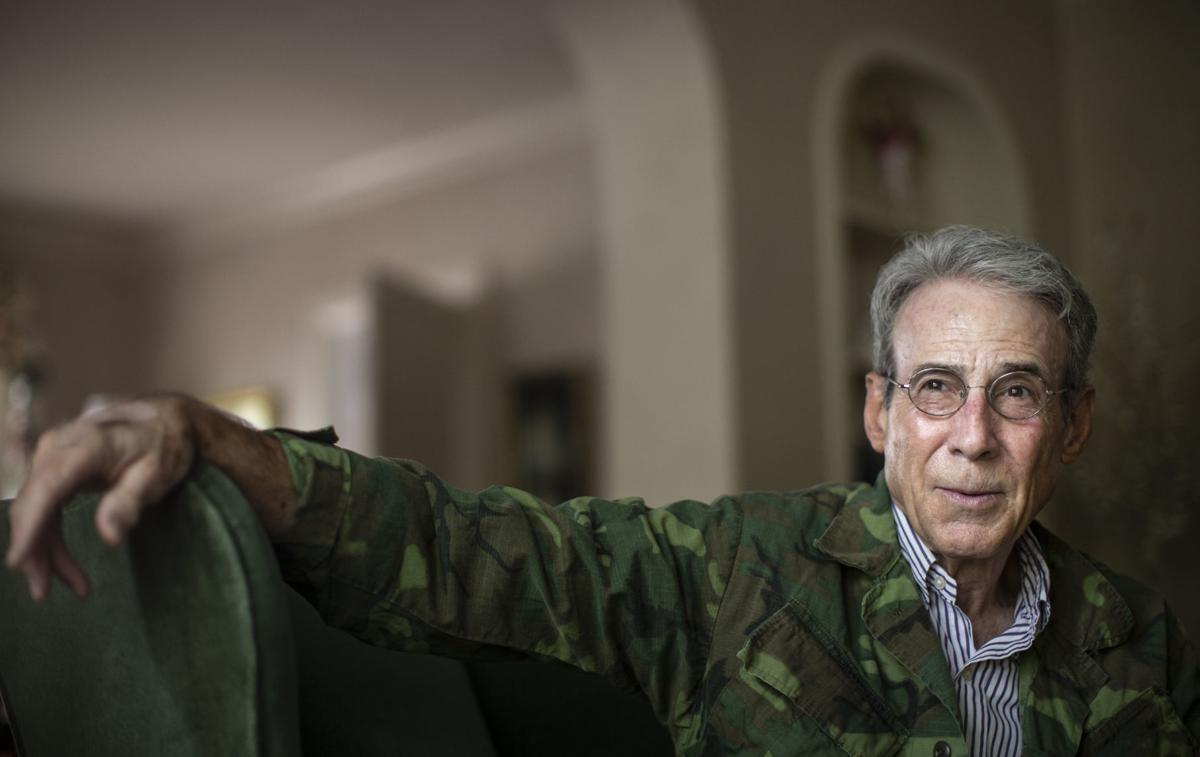 Tom Williams looks out his window of his Greensboro home while wearing the military jacket he wore during the Vietnam War. “Fighting a war is a dirty job, literally and figuratively,” he said.

Tom Williams shows one of his Purple Heart medals at his home in Greensboro. Williams was wounded twice while on patrol in Vietnam, both times by booby traps.

Tom Williams holds up a Viet Cong flag he brought back from Vietnam.

Tom Williams goes through some of his personal memorabilia from Vietnam in Greensboro, N.C. on Tuesday, October 16, 2018.

Tom Williams hold up his harness that he wore in Vietnam in Greensboro, N.C. on Tuesday, October 16, 2018.

Tom Williams looks out his window while wearing his flack jacket from Vietnam in Greensboro, N.C. on Tuesday, October 16, 2018.

Tom Williams looks out his window of his Greensboro home while wearing the military jacket he wore during the Vietnam War. “Fighting a war is a dirty job, literally and figuratively,” he said.

The thing you have to understand, says retired federal judge Tom Williams, is how invulnerable the young person feels who enlists during wartime.

“The mindset of someone who does something like that is hard to get across,” he says with a smile. “You don’t feel as though you can die. You feel almost invincible — you know that someone might die, but it certainly isn’t going to be you. Instead, I was afraid that I was going to miss the war.”

The war was Vietnam, where Williams served from March to August 1969 as part of his four years in the U.S. Marine Corps. In the process, he earned two Purple Heart decorations for wounds received in combat and the respect of a platoon that he led from the front. Admiration for two uncles, both World War II veterans, and the educational benefits of the GI Bill got him in; his sense of duty and responsibility saw him through, and became a life-long philosophy.

“I’ve never shied away from the dirty jobs,” Williams says. “Fighting a war is a dirty job, literally and figuratively. Being a prosecutor is a dirty job. But somebody has to do these things. You have to feel the necessity of it and do it.”

After two years at UNC-Chapel Hill, Williams decided, in 1967 at age 23, to enlist in the Marines. Deep military roots also ran in the family; four uncles and Williams’ brothers had all served.

“I lived in awe of their experience, and I wanted to know what that was like,” he says. “My uncles were both my heroes. I also knew I wanted a career in politics, and I wanted this experience to prepare.”

Williams entered as an enlisted corpsman, and did well in basic training at Parris Island. Then came Officer Candidate School and basic infantry training at Camp Lejeune, where he also was assigned an infantry specialty: anti-tank assault. Williams learned to use a recoil-less rifle, a 3.5 rocket launcher — a bazooka, to Army partisans — and a flame thrower (tip: never use in the wind.) Finally came platoon command in Vietnam as a second lieutenant.

In 1969, the war was still at its height — “We got shot at a lot,” Williams says — and his platoon was in the thick of the action against Viet Cong guerilla forces. His first Purple Heart came from a surprise firing device — a booby trap — set on Go Noi Island, in June that year. During a sweeping maneuver along a river to look for concealed enemy positions, Williams stepped on a “chicom” grenade — “basically a small tin can full of explosives with a fuse and a trip wire,” he says — and was transported by Medevac. “I was lucky — it didn’t hit anything vital,” he says.

A few weeks later, in August 1969, Williams was back in Vietnam, patrolling in an area between Danang and An Hoi nicknamed “Arizona” by the soldiers for its hot, dry, flat terrain. After observing some enemy activity, Williams was calling in an artillery position when the radio operator set the radio down on another hidden grenade.

This time, the device was bigger, and Williams wasn’t as lucky.

“It got about three of us,” he says. “I got hit in the stomach, got a piece in my heart, legs, shoulders ... It was as bad as it gets in terms of pain. I literally couldn’t speak, it hurt so bad.”

Williams went back to duty as an officer trainer at Marine Corps Base Quantico in Virginia for the rest of the year, eventually leaving the service in 1971 as a first lieutenant.

“I can get misty pretty fast thinking about those guys,” Williams says of the soldiers with whom he served. “It was a young man’s war. Some of them weren’t even shaving yet, and they still had to do a lot of dirty work. Sometimes, I’d have to yell at them, and it hurt to have to do that because they were just boys.”

Williams went back to UNC, earning a degree in political science. He found another new perspective after taking a job as a prison guard at Polk Youth Center, then in Raleigh, before law school.

“I’d always had an obsession with being a lawyer and a judge, and I wanted insight into what prison was like,” he said. “It was an eye-opener. I was involved in escape attempts, every kind of thing.”

Williams earned a law degree in 1974 from Wake Forest University, married his wife, Linda Rhyne, and had a daughter. After a six-year stint as an assistant district attorney in Guilford County, Williams was elected as a District Court judge and, later, a federal administrative law judge. He retired in 2015.

Williams found that his legal career used many of the same principles that he’d learned in the military: do what has to be done, even if it’s dirty work.

“There were certain things I would not do,” he says. “You can’t favor people you like, or disfavor people you don’t like. Often, the law dictates things that don’t seem right. If you can’t do the job ethically, and do the unpleasant part of it like the pleasant, don’t do it.”

From time to time, Williams says, he dreams about his time in the service. Some are nightmares, but not all. Those years, he says, formed the backbone of his life.

“I feel that it’s a responsibility to talk about those years, and I don’t mind talking about them,” he says. “The perspective I got from the service — I wouldn’t take anything for it.”

Articles and photos from the special "Honoring Our Veterans" section that ran on Nov. 11, 2018. Submissions for the 2019 section are being acc…