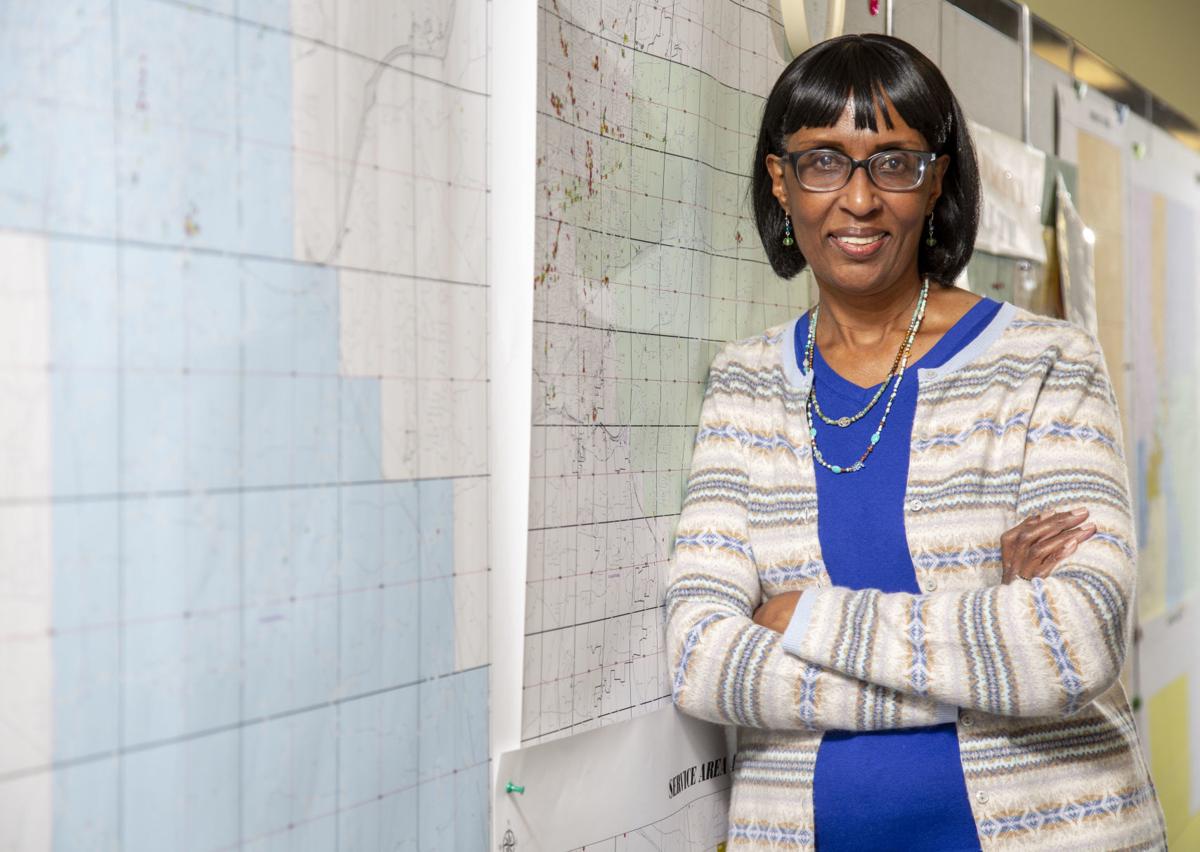 Guilford County Health Director Merle Green poses in her office in Greensboro on Tuesday. Green will be retiring at the end of February from the post that she’s held since July 2005. 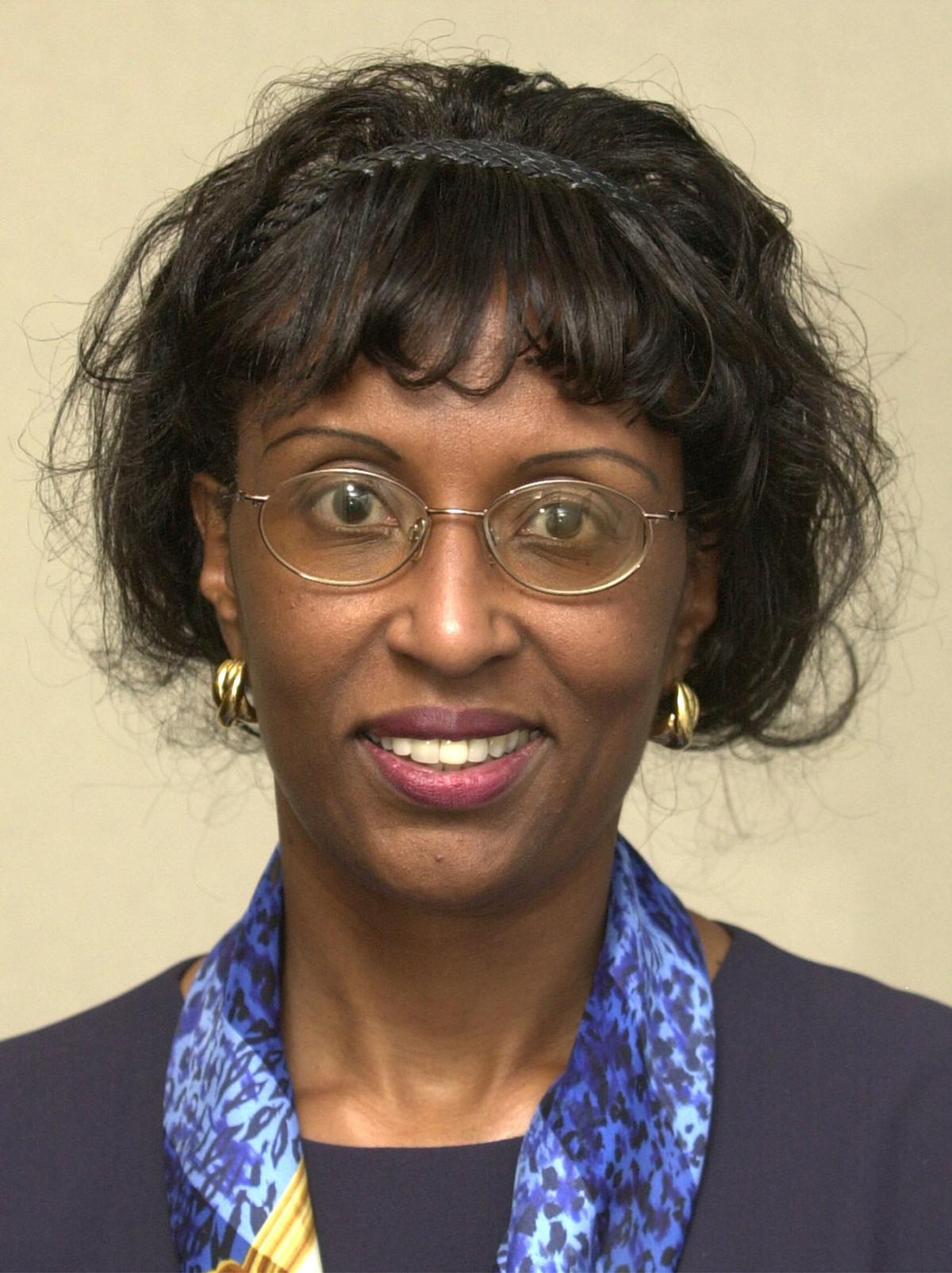 Merle C. Greene in 2002 when she was assistant health director with the Guilford County Department of Public Health and a volunteer with the Nuestra Salud Latino Advisory Committee. 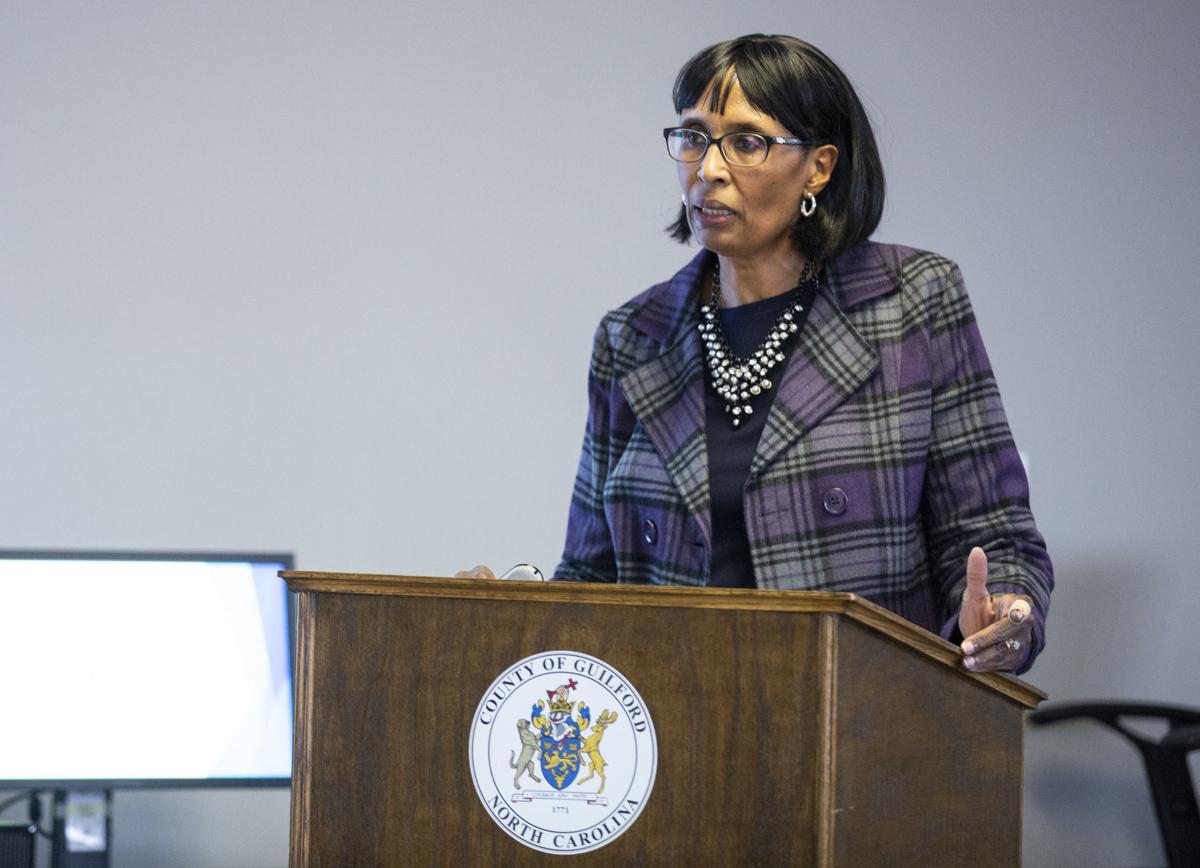 In this November 2018 photo, Merle Green speaks during the Greensboro Water Department’s presentation about PFOS, a water contaminant, for the Guilford County Board of Commissioners. 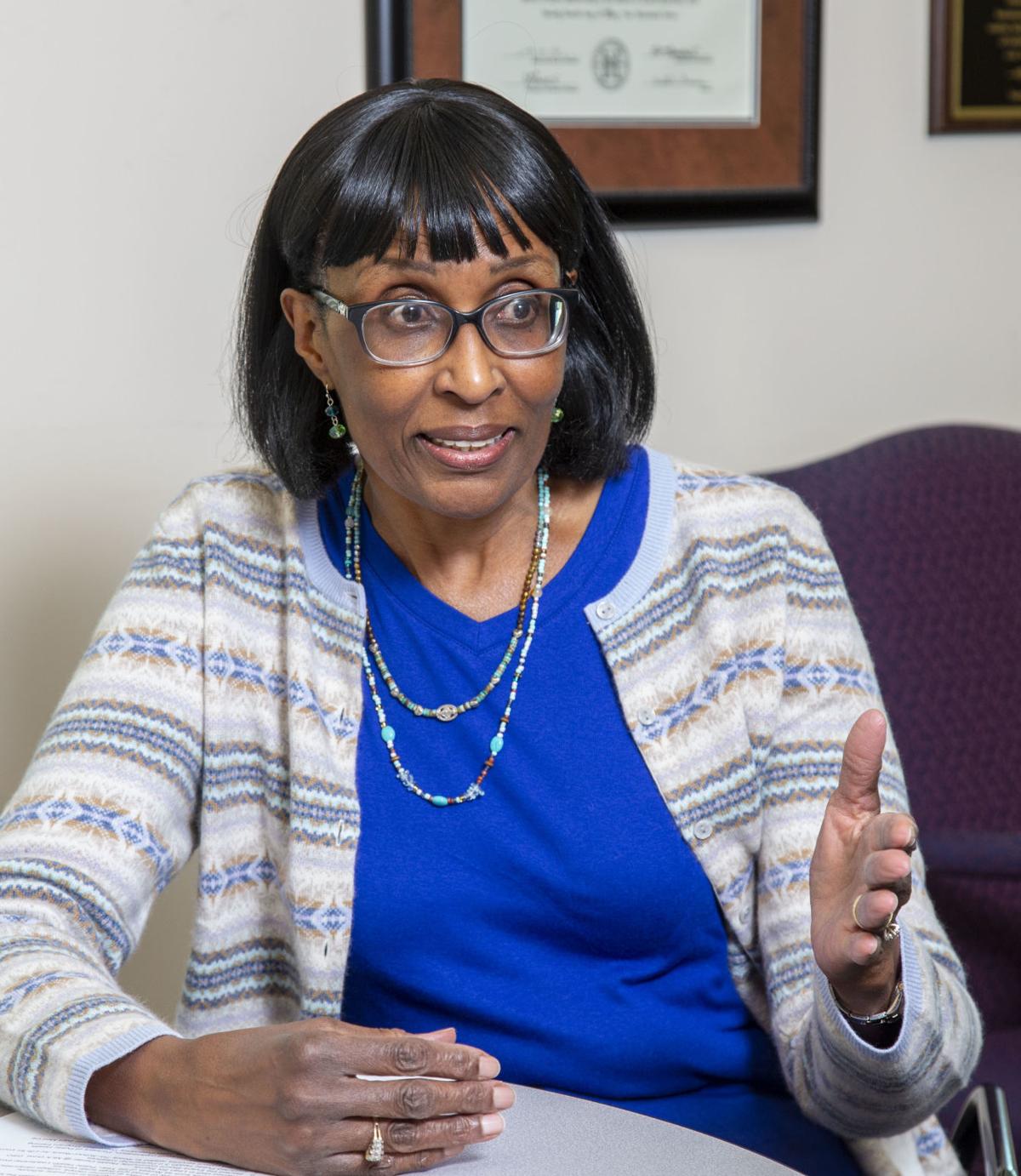 Guilford County Health Director Merle Green has been on the job since 2005. 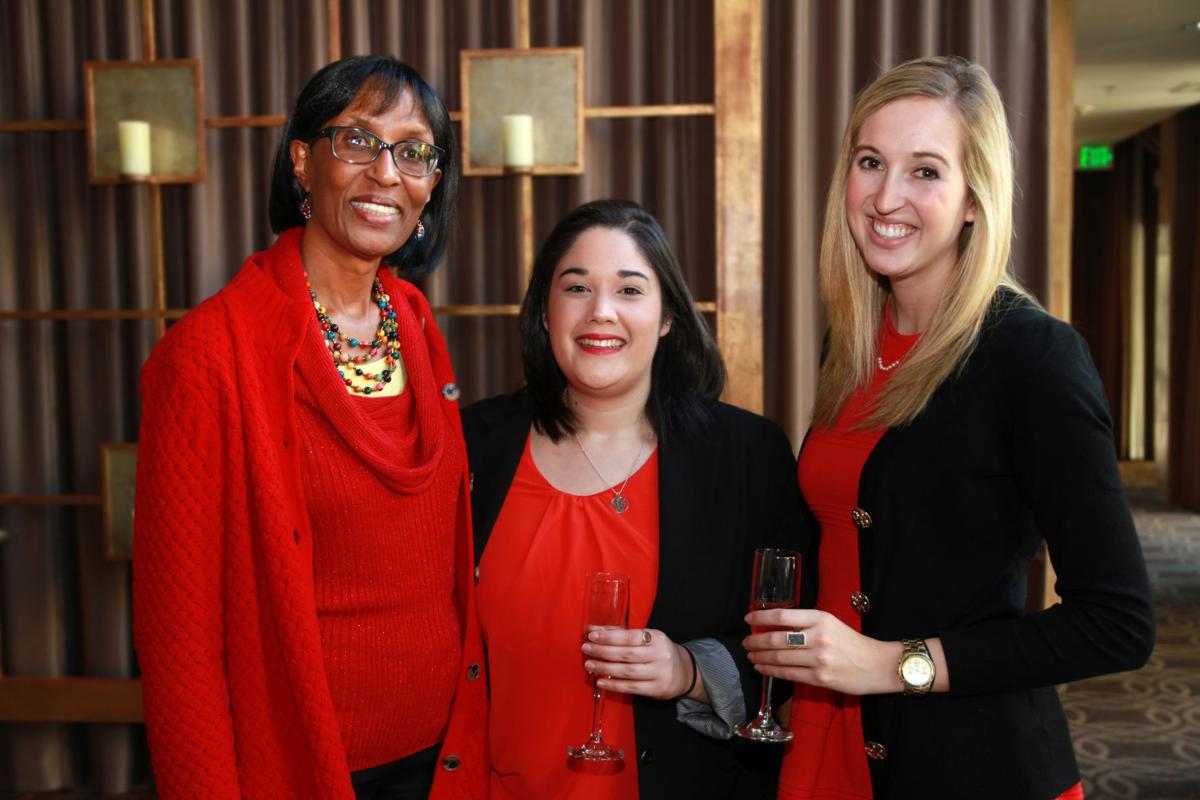 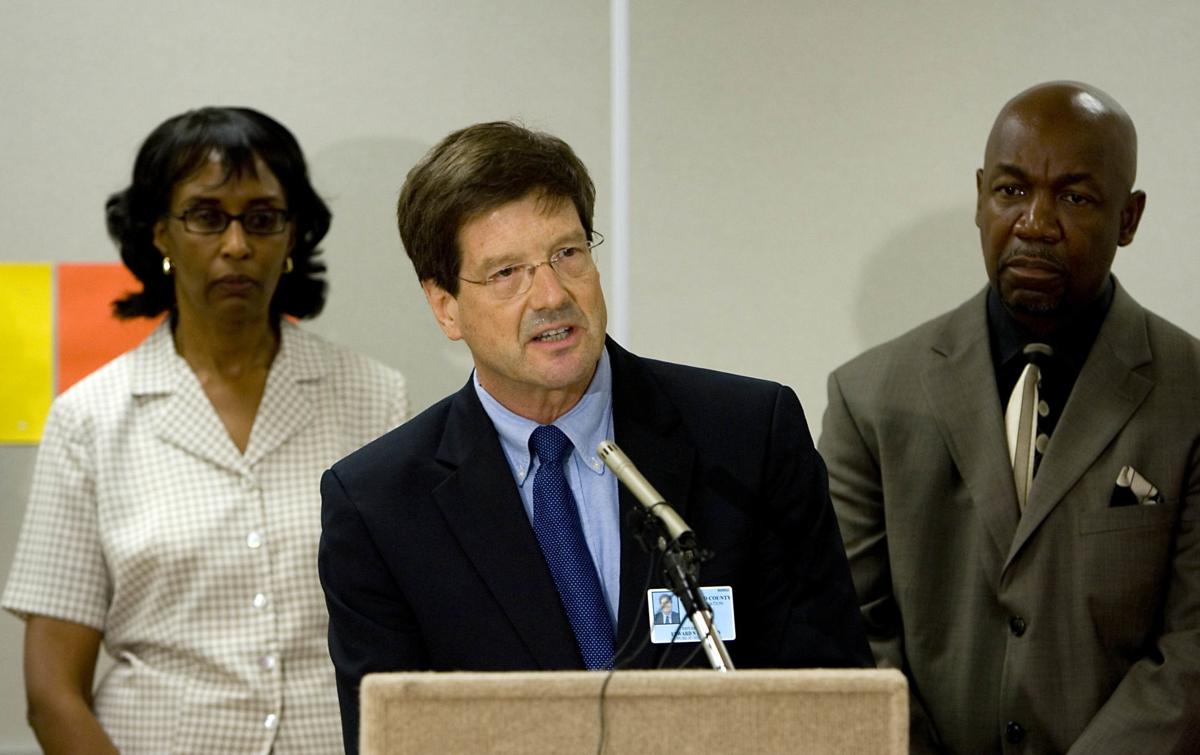 In this June 2009 photo, Guilford Health Director Merle Green (left) attends a news conference with the county's medical director at that time,  Dr. Ward Robinson, and Skip Alston, who was then chairman of the Guilford County Board of Commissioners. The county health department held the news conference to address health issues of students and staff at Oak Ridge Elementary School.

Guilford County Health Director Merle Green poses in her office in Greensboro on Tuesday. Green will be retiring at the end of February from the post that she’s held since July 2005.

Merle C. Greene in 2002 when she was assistant health director with the Guilford County Department of Public Health and a volunteer with the Nuestra Salud Latino Advisory Committee.

In this November 2018 photo, Merle Green speaks during the Greensboro Water Department’s presentation about PFOS, a water contaminant, for the Guilford County Board of Commissioners.

Guilford County Health Director Merle Green has been on the job since 2005.

In this June 2009 photo, Guilford Health Director Merle Green (left) attends a news conference with the county's medical director at that time,  Dr. Ward Robinson, and Skip Alston, who was then chairman of the Guilford County Board of Commissioners. The county health department held the news conference to address health issues of students and staff at Oak Ridge Elementary School.

GREENSBORO — Guilford County Health Director Merle Green has led her multifaceted agency to a point where she believes it’s time for new energy and new leadership.

So she will be retiring at the end of February from the post that she’s held since July 2005.

“The time has come. I’ve been thinking about it for several months,” she said. “All the stars aligned, as they say.”

It’s been a productive stint for her as leader of the sprawling department that handles everything from infectious disease to childhood immunizations, environmental health, well and septic permits, restaurant inspections, dental care, and rabies treatment for people with animal bites.

The department’s reputation extends well beyond Guilford’s boundaries as one that the U.S. Centers for Disease Control and Prevention has tapped on more than one occasion as a research partner.

Its roots go back to 1911, when the health office was formed by local authorities responding to a petition from residents seeking someone who would “give his entire time to looking after the health of the county.”

But the modern-day department, with its Greensboro headquarters on Maple Street, was at a low ebb 15 years ago when Green was elevated from assistant director to the top slot.

Her appointment followed a scandal triggered by a DWI case involving then-director Ramesh Krishnaraj, a physician who had been stopped by sheriff’s deputies at 3:15 a.m. one wintry night in 2003 after driving his convertible, top down, through the Stoney Creek golf community honking the horn.

Green said in a recent interview that her first significant hurdle after being installed as director involved a pressing need to widen the skill set of the medical staffers in the department’s various clinics.

“We were specialized to a fault,” she said.

One small nucleus of caregivers focused on pediatrics, another on infectious disease or tuberculosis, others on asthma.

These limitations came to a head one day early in her tenure, Green said, when all the childhood specialists were at a conference and nobody was on hand to treat kids.

She launched a months-long effort to get the department’s medical personnel cross-trained in enough areas that it would always have someone available to treat the more common human health issues.

“So if you were doing asthma only, we were going to refresh your TB skills,” she said. “The whole thing took about 18 months because you don’t learn health care overnight.”

The department is still structured around that multi-disciplinary approach and it continues to produce results, she said.

“Every day of the week, no matter who walks in, we have people who can address their problem,” Green said. “TB, influenza, your child needs a vaccination, we can take care of you.”

Her impending departure already has triggered a nationwide search for her successor. Green’s salary is $174,583, according to county records, and Guilford leaders are hoping to hire the next director in a salary range between $130,000 and $170,000.

Guilford began advertising the opening widely last week in professional publications and other forums online, seeking someone capable of leading “highly skilled teams comprised of over 400 employees (who) care deeply for their patients and offer many programs and resources that are not typically available.”

County leaders haven’t set a deadline but they hope to have Green’s successor chosen by the end of April, said Deputy County Manager Clarence Grier.

He said that final details have not been worked out yet about how the search will be conducted, but that for such “high-profile” positions the county typically forms a panel of senior officials led by County Manager Marty Lawing to interview promising candidates.

Guilford Commissioner Melvin “Skip” Alston, who sat on the health board that selected Green in 2005, said her performance in the years since then has lived up to all his hopes and expectations.

During her years running Guilford County’s large and complex program, she has built a reputation for following through in every detail of what she promised and keeping the commissioners well informed, Alston said.

“That’s something that not only me, but a lot of other commissioners have noticed,” Alston said. “When she has told us something, we knew we could take it to the bank.”

Green, 62, is not a medical doctor but she holds master’s degrees in public health from UNC-Chapel Hill and in business administration from Elon University. She obtained her bachelor’s degree at N.C. Central University in health education.

She lives in McLeansville with her husband, Charlie Green, owner of L&J Fashions and Tailoring, a clothing store in Burlington.

Alston said that as a commissioner, he also appreciates her ability to work within the realm of what is possible. As an example, he pointed to the way she led the department’s recent effort to expand the limits on tobacco usage in government buildings and other properties.

The department’s goal was to modernize an outdated policy that prohibited smoking and snuff use in county buildings, but that did not address vaping and e-cigarettes. Green and other department officials sought both to add those practices to the ban and to expand the no-tobacco rule outdoors to public parks, golf courses and similar government-owned venues.

But the proposed outdoors prohibition sparked a controversy that threatened to derail the whole plan.

“She was the one that came up with a compromise for us to consider to make sure it wasn’t too overwhelming,” Alston said. “It could have been a big issue within the community with a lot of confusion and disagreement.”

The revision that was adopted did add vaping and e-cigs to the list of banned tobacco uses, but it scrapped the outdoors component.

Asked about the compromise in a recent interview, Green said essentially that half a loaf was the best option.

“So we don’t do it in one fell swoop. Maybe we do it in smaller increments,” she said.

Perhaps somewhat ironically — or maybe not, given that this is, after all, North Carolina — Green grew up on an Orange County farm where tobacco was the cash crop.

Her grandfather was a former sharecropper who amassed enough wealth to buy 87 acres where the family also grew cotton and raised hogs and cattle.

But the scientific evidence that has emerged since then about tobacco and its health effects has dramatically changed her attitude toward the golden leaf.

“I look at it as your lungs are going to be affected. I’m a public health director,” she said.

Green said that among her proudest accomplishments at the health department’s helm was the 2011 opening of the Evans-Blount Community Health Center, a clinic the county built in southeast Greensboro to replace private medical providers who had moved elsewhere.

“We asked the community first,” she said of the clinic’s planning process. “The community said if you create a health center, ‘Yes, ma’am, we will use it.’ And they have.”

Green said that public health has expanded into areas that she never imagined when she first stepped into the job. A key expansion has been “family centered care,” where the department works with an entire household to provide necessary medical treatment but also to educate family members about the elements of a healthy lifestyle.

Public health also has expanded to recognize violence as a public health threat and to view its prevention as part of the overall health-care mission, she said.

She said the next major challenge that looms is devising ways to prevent social media and the digital world from wreaking havoc upon the nation’s health by turning Americans into overweight couch potatoes with emotional problems that stem from too much screen time and too little face-to-face interaction with fellow human beings.

She also envisions public health expanding into programs that help people emerging from prison and group treatment centers break free from the behavioral cycles that have trapped them in dead-end lifestyles.

And she said administrators who come after her will have to focus even more attention on children in their first few years of life and on the increasing population of healthy retirees who want to stay that way.

Her own plans for retirement don’t include full retirement or what most people would consider that to be. She said she plans to help out in her husband’s business more, as well as seeing through to completion a new home that they are building in Graham.

She said she also plans to offer her services as a corporate trainer, providing guidance to companies and other organizations with motivational training programs that increase productivity.

But there will definitely be more time for leisure, she said, noting that she and Charlie have planned a trip to the Turks and Caicos Islands less than a week after her last day in her Maple Street office.

It’s also wonderful, she said, that her extended family has kept their Orange County farm intact for three generations.

“I just want to have more time to go back to the family farm and look at the deer,” she said.