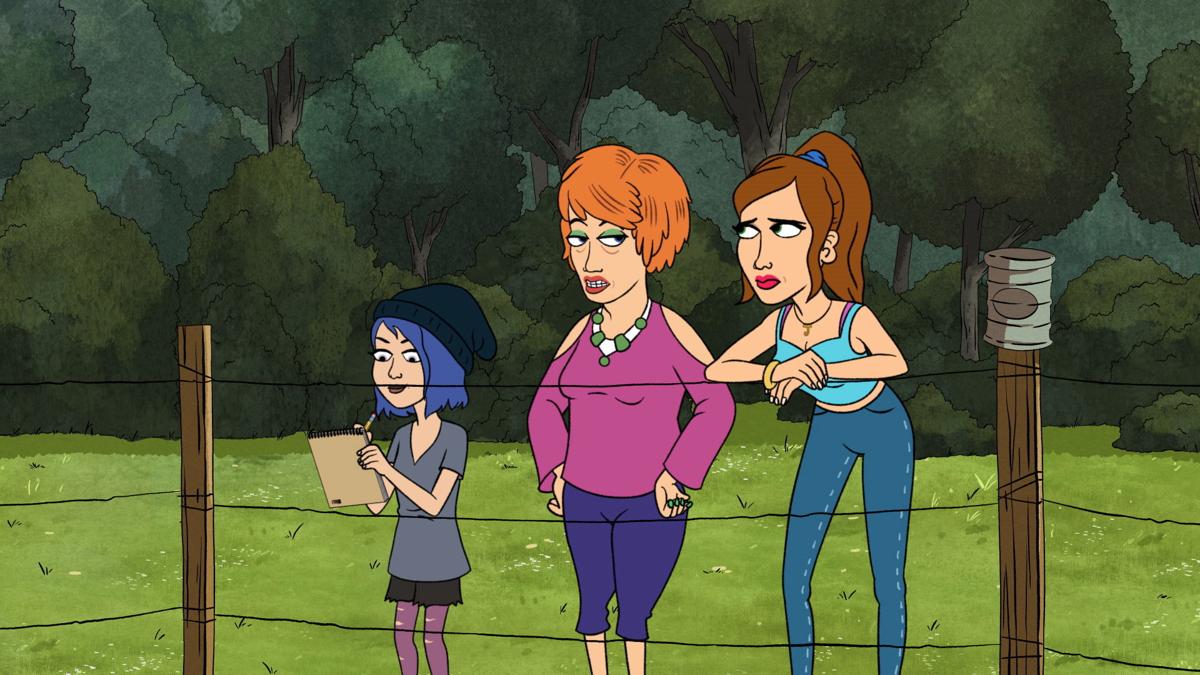 Jillian Bell (from left) as Violet Hart, Maya Rudolph as Betty Hart and Kristen Wiig as Jenny Hart in the animated show “Bless the Harts,” which was created by High Point native Emily Spivey.

Jillian Bell (from left) as Violet Hart, Maya Rudolph as Betty Hart and Kristen Wiig as Jenny Hart in the animated show “Bless the Harts,” which was created by High Point native Emily Spivey.

Elizabeth Lail, a 2014 alumna of the UNC School of the Arts, has two intense performances out on home video this week.

On Tuesday, the thriller “Countdown” will come to Digital HD, available on such services as iTunes and Vudu; and the first season of “You,” a psychological drama about a bookstore manager whose obsession with a pretty customer takes a dark turn, will be released on DVD. Lail, 27, plays the female lead in both.

Lail is an Asheboro native and became interested in acting when she was a child, working in community theater and attending a summer session at UNCSA when she was 15. She went on to attend the high school program in her senior year and then the college program, graduating from UNCSA’s School of Drama in 2014. Her previous roles include a live-action performance as Anna, the popular, wholesome character from “Frozen,” in ABC’s fantasy series “Once Upon a Time,” as well as “Dead of Summer,” a cable thriller about camp counselors stalked by a killer.

In “Countdown,” she plays a young nurse who, on a whim, downloads an app that predicts when a person is going to die. When it tells her she has less than three days to live, and the evidence is strong that the app is always right. She must figure out how to save herself before time runs out — and whether the app is somehow causing people to die. The DVD and Blu-ray will be released next week, on Jan. 21, from Universal Pictures Home Entertainment.

In “You,” she plays Beck, a graduate student and aspiring writer who becomes the target of Joe’s (Penn Badgley) affections. From her perspective, the story is a romantic comedy; but from his, it is something far more sinister as he tries to psychologically manipulate her into becoming his dream girl and trying to alienate her from anyone else. The series is based on a popular novel by Caroline Kepne.

”I got to live in the romantic world of Joe and Beck, which is easier for me to understand,” Lail told me when the series debuted back in 2018. “She has no idea how bad it is, she’s just messed up with her day-to-day worries.”

The first season originally aired on Lifetime, but proved more popular on Netflix; a second season debuted there on Dec. 26, 2019.

The first season is being released on DVD by Warner Archives, a line of manufacture-on-demand discs not sold in stores but available online from WBshop.com and Amazon. Also new this month will be the third season of “Hangin’ With Mr. Cooper” on Jan. 21, and the first season of “Roswell, New Mexico” on Jan. 28.

The season finale of “Bless the Harts,” an animated comedy set in the sorta-fictional Piedmont Triad town of “Greenpoint, North Carolina,” will air tonight on Fox at a special time, 10:30 p.m. (the lineup is delayed by the NFL playoffs).

The episode, “Til Death do us Hart,” has Jenny (voice of Kristen Wiig) trying to prove she’s not afraid of marriage.

The series, which was created by High Point native Emily Spivey, has already been renewed for a second season. Spivey provides a guest voice in the season finale, as do Mary Steenburgen and Fortune Feimster, a Charlotte native.

Another week, another awards ceremony. At 7 p.m. tonight, CW will present the 25th annual Critics’ Choice Awards; and, like last week’s Golden Globes, there are some movies and shows with local ties up for awards.

Margaret Qualley, an alumna of UNCSA’s high school program, is nominated for best supporting actress for a miniseries or movie made for television, for her role in “Fosse/Verdon,” and she is also part of the cast of the movie “Once Upon a Time ... in Hollywood,” which is up for “best acting ensemble” in addition to other categories.

And two shows with local connections that won at the Golden Globes are up for awards: “Fleabag,” with a cast including UNCSA alum Brett Gelman, is up for best comedy series; and Ramy Youssef, who won a Golden Globe for acting for his show “Ramy” (which is produced by Winston-Salem native Jerrod Carmichael), is up for best actor in a comedy series.

The Audience Network is coming to an end. The channel, which was shown on DirecTV and AT&T U-verse, will cease operations this spring, according to a report in Variety. The channel was home to several shows with UNCSA actors, including “Mr. Mercedes,” which had Mary-Louise Parker in its first season and Brett Gelman in its third; and “Kingdom,” which ran for three seasons and featured Matt Lauria as an MMA fighter. It is unclear now if “Mr. Mercedes,” which is based on the works of Stephen King, or any other original programming from the network such as “Condor” and “Loudermilk,” may continue on a different channel.

The CW network is concluding its epic “Crisis on Infinite Earths” story arc, which began last month, with a double-header on Tuesday night: “Arrow,” airing at 8 p.m., tells the fourth part of the story. Then the season premiere of “DC’s Legends of Tomorrow,” at 9 p.m., wraps it all up, with the conclusion of the “earth-shattering” crossover.

The story revolves around an extra-dimensional menace that has destroyed the multiverse, leaving only a handful of superheroes — and Lex Luthor — to find a way to undo it.

The “Arrow” episode, which sets up the series finale coming up later this month, was co-written by Marv Wolfman, the comics writer behind the original 1980’s “Crisis” comic book miniseries.

Last week, CW renewed all of its DC Universe superhero shows except “Arrow,” and several more shows are in the works, including a prospective spinoff that will be set up in the Jan. 21 episode.