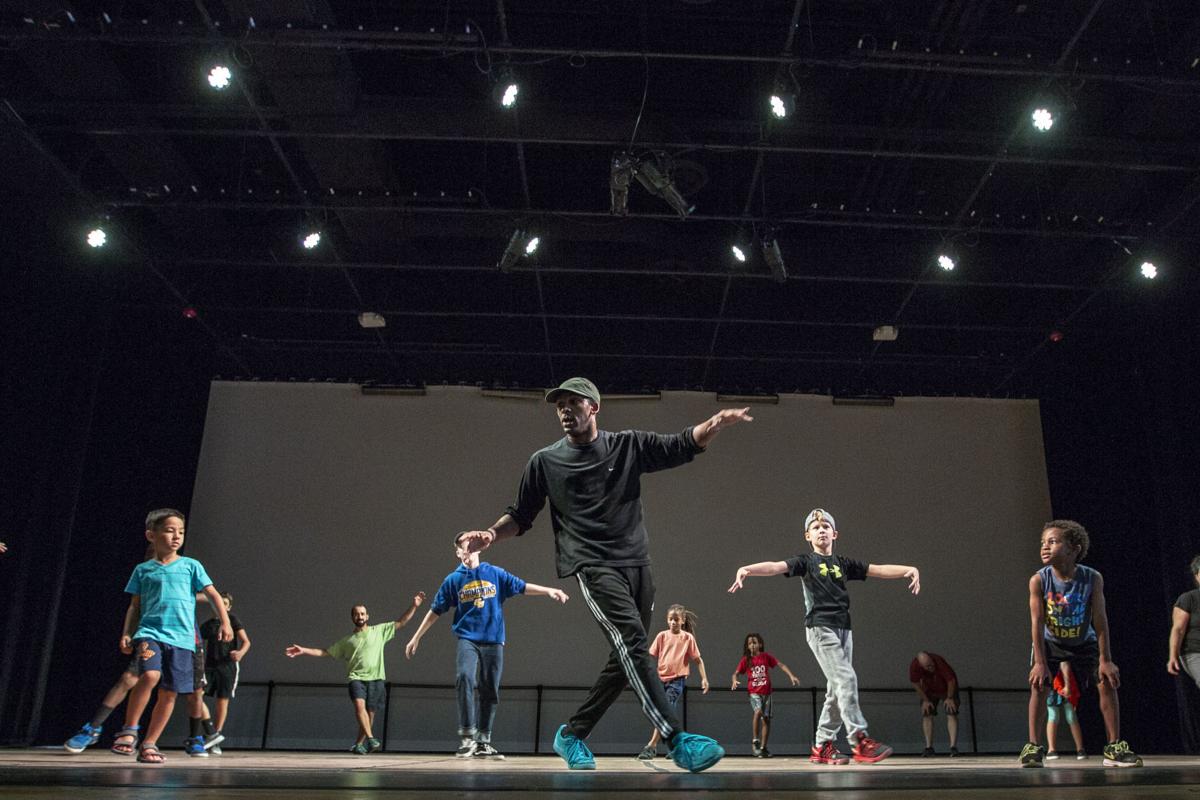 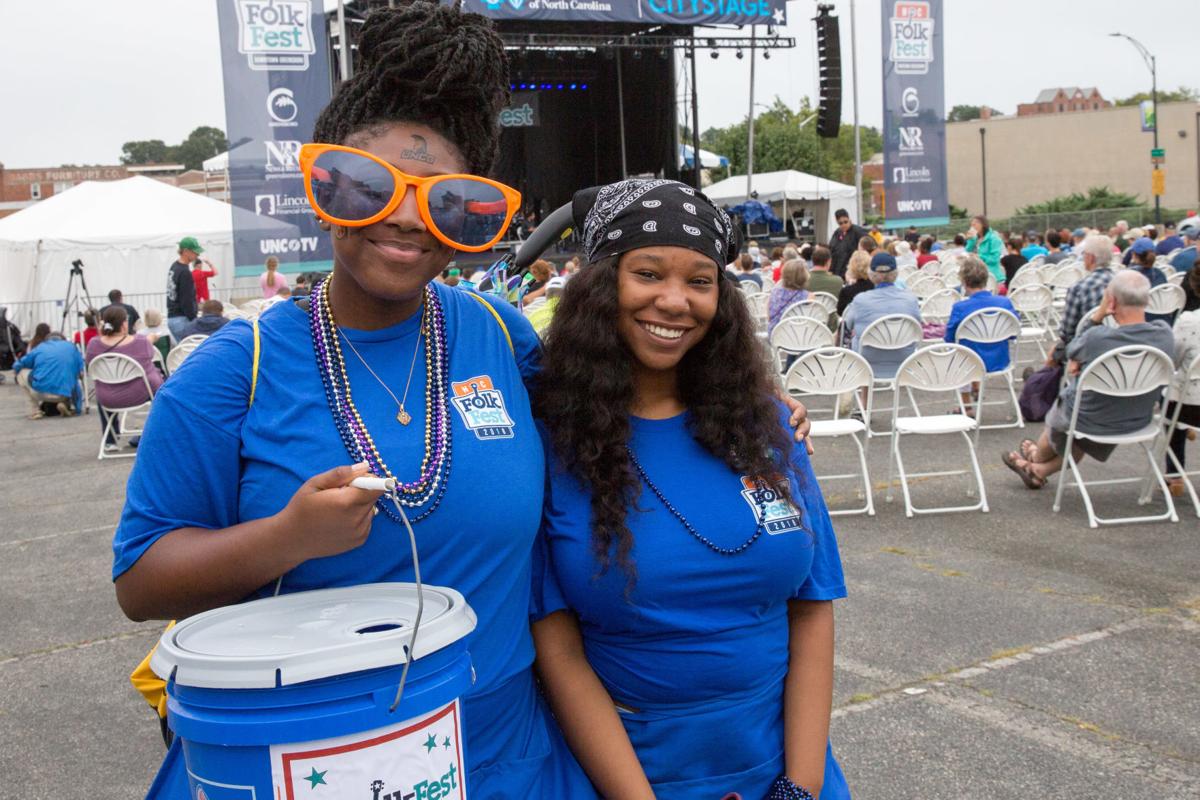 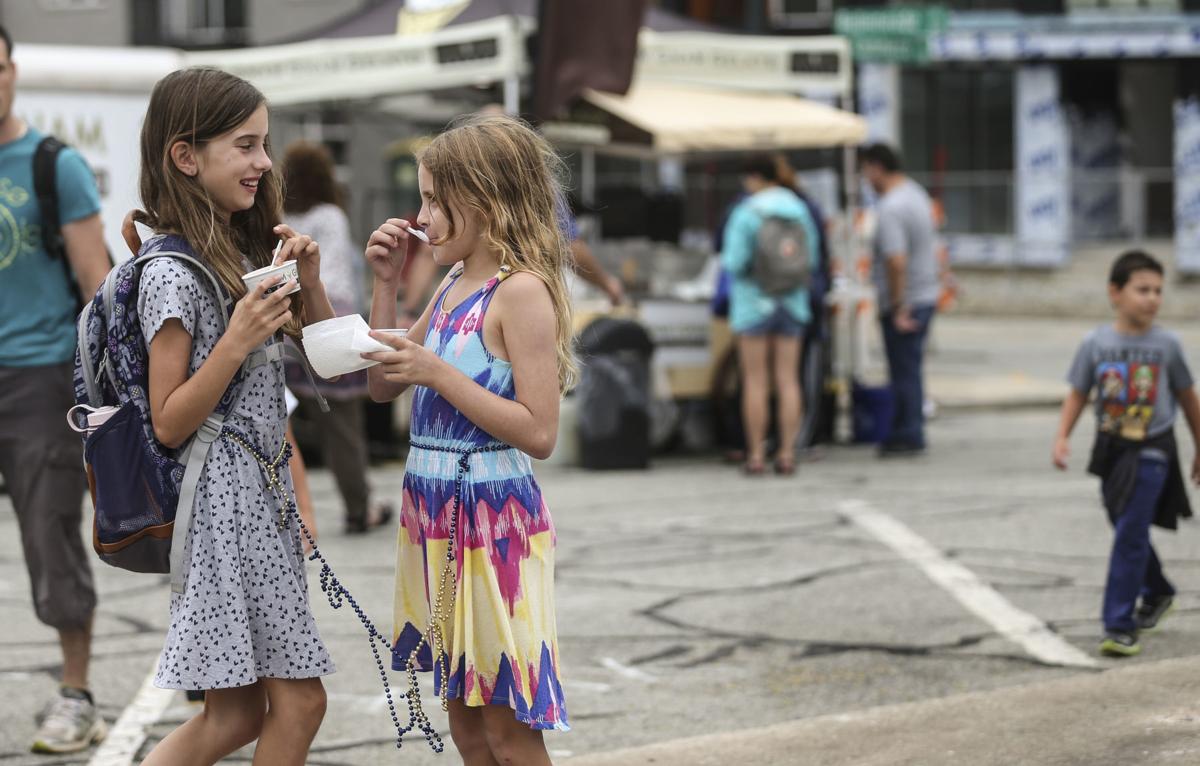 Annika Lindgen (left), 10, and Josephine Craig, 9, eat gelato while tied together with beads from UNCG. “We did it so we wouldn’t lose each other” they said at the 2018 N.C. Folk Festival in Greensboro. 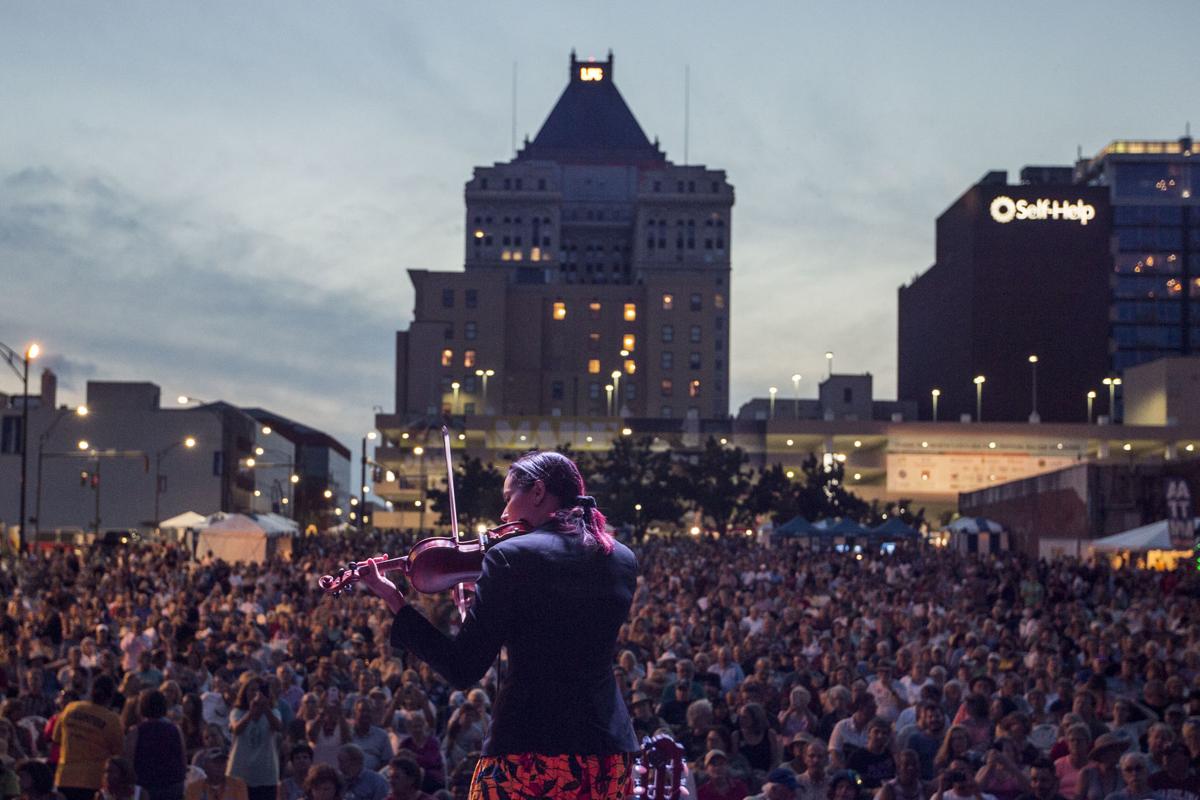 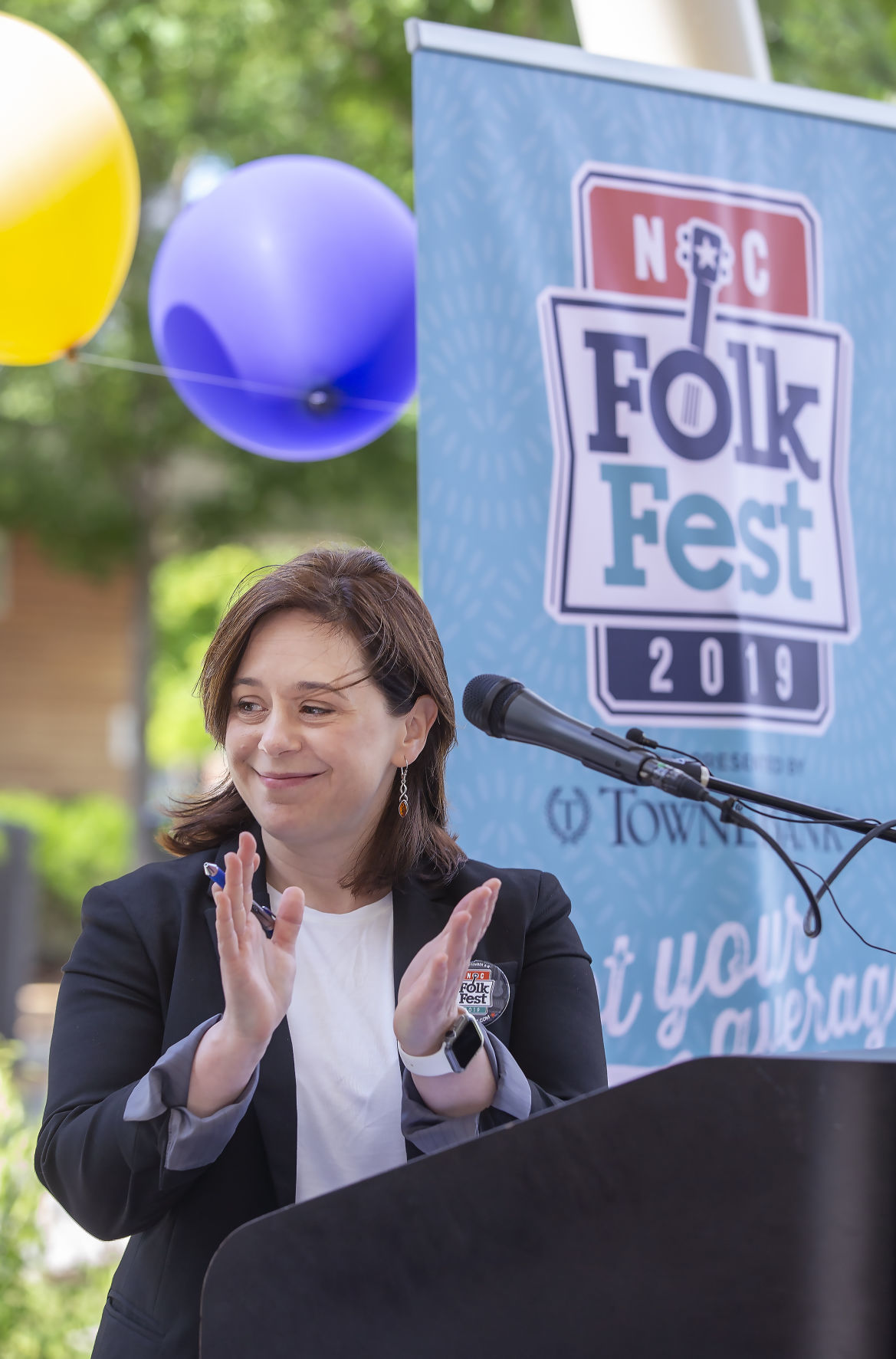 Annika Lindgen (left), 10, and Josephine Craig, 9, eat gelato while tied together with beads from UNCG. “We did it so we wouldn’t lose each other” they said at the 2018 N.C. Folk Festival in Greensboro.

GREENSBORO — As the second annual N.C. Folk Festival gets into full swing Friday, audiences will notice a few changes from 2018.

They will host about 40 performers, including Booker T. Jones of Booker T. and the M.G.’s fame, the Irish band Lúnasa, Cajun band Racines and rock and blues band North Mississippi Allstars.

But the Dance Pavilion, on East Washington Street across from The Depot, won’t operate this year. Organizers couldn’t confirm the site’s availability soon enough to make plans.

Audiences still can find dance. Learn some steps in workshops in the Van Dyke Performance Space at the Greensboro Cultural Center.

Center City Park still will host the N.C. Folklife Area, which will focus on traditional North Carolina fiber arts. But there won’t be an official stage.

The festival will expand in another direction.

Another popular feature will return from 2017: the parade. There won’t be just one or two, but three shorter parades.

One aspect hasn’t changed: the approach to programming.

“We went at this year’s program with the same kind of philosophy, making sure that there’s a really good mix of world performance traditions, American roots with blues and Cajun, and then of course North Carolina,” N.C. Folk Festival director Amy Grossmann said.

The festival happens rain or shine.

Here’s a primer on highlights:

A “Songs of Hope & Justice” concert hosted by Piedmont singer-songwriter Laurelyn Dossett will return to help launch the festival.

The concert of renowned folk musicians will be at 7 p.m. tonight at the Van Dyke Performance Space in the Greensboro Cultural Center, 200 N. Davie St.

Tickets start at $25. Seating capacity is limited. For tickets and information, visit thevandyke.org.

From 5:15 to 10 p.m., four outdoor stages will host a full slate of entertainment. A fifth, the Family Stage, will open Saturday.

The N.C. Brazilian Arts Project will start playing at 6 p.m. around Center City Park, then parade to CityStage.

Their show will wrap up around 6:45 p.m. at CityStage, in time for opening remarks. Sacred steel band The Allen Boys will perform at 7 p.m.

Then at 8:30 p.m., renowned soul instrumentalist and vocalist Booker T. Jones will perform on CityStage. Jones rose to fame as the frontman of Booker T. and the M.G.’s.

One of his most famous songs, “Green Onions,” was inducted into the Blues Hall of Fame in 2018. It remains the only instrumental track on the “Rolling Stone” 500 Greatest Songs of All Time.

“After last year, the reaction I got was, ‘Where was the parade?’” Grossmann said. “I was like, ‘OK, I’ll do a parade again.’ That’s one way we listen to the community.”

As the festival gets underway between 5:15 and 6 p.m. Friday, the N.C. Brazilian Arts Project will start playing at 6 p.m. around Center City Park, then parade to CityStage. Their show will wrap up around 6:45 p.m. at CityStage, in time for opening remarks.

Around 5:30 p.m. Saturday, the N.C. Brazilian Arts Project will take its street performance on a short trip from around Center City Park to the TowneBank Stage at LeBauer Park. Grossmann invites spectators to join in.

On Sunday, the Grandfather Mountain Highlanders Pipe Band will open the day’s festivities at 11:30 a.m. with a performance at the TowneBank Stage.

The Sottish pipe band will play again at 2:45 p.m. at the Lee Wrangler stage.

“I’ll have them do short little street performances so people can watch them march, watch them do some of their formations, which is very beautifully choreographed with the music,” Grossmann said.

For the first time during the festival, eight downtown businesses will host performances by 11 local bands.

The bands will perform from 12:30 to 5:30 p.m. Saturday and Sunday, in businesses adjacent to the festival’s footprint of tents and outdoor venues.

“That’s when the businesses were eager to have more foot traffic into their businesses and along the streets of downtown Greensboro,” Grossmann said.

Find the schedule at ncfolkfestival.com/schedule.

“This new collaboration with music is a great step to truly showcase what downtown Greensboro has to offer,” said Zack Matheny, DGI’s president.

At the Family Activities area near the Greensboro History Museum, children can watch a blacksmith, see colonial toys, play cornhole, or create a magnet or a Guatemalan worry doll.

On Saturday and Sunday, a variety of entertainers will perform on its Family Stage.

Tarish “Jeghetto” Pipkins is a self-taught artist from Chapel Hill, who has built puppets for 16 years.

The festival has arranged for 55 makers of arts and crafts to sell their wares.

Wells Fargo will sponsor the N.C. Maker’s Marketplace, which will stretch along North Elm Street near the Lee Wrangler stage.

Several booths will offer a variety of collectibles, including handmade puppets, jewelry, hand-carved spoons and unique pottery. A complete list is available on the festival’s mobile app and online at ncfolkfestival.com/makers-marketplace.

No less than 26 food vendors will sell a range of culinary delights, including Porterhouse burgers, Asian and Hispanic fare and classic Southern favorites such as sweet tea and kettle corn.

The wide array of regional and ethnic foods complement the festival’s diverse list of world-class performers and styles.

Dance at the Van Dyke, a dance series presented by Dance Project, will host free, interactive workshops in the Van Dyke Performance Space in the Greensboro Cultural Center.

“It’s a great value to people who come to the festival and want to learn a few steps before they go out on the dance floor, in front of one of the stages,” Grossmann said.

Brickhouse also will present a free entrepreneurship workshop for dancers from 6 to 7:30 p.m. Sunday, in Dance Project’s Studio 323 in the cultural center. It will cover marketing/promotion, navigating competitive markets, monetizing artists’ skill sets and conflict transformation.

Brickhouse is an internationally established dancer, choreographer, community leader and cultural preservationist. He is founder and executive director of Urban Artistry in Silver Spring, Md.

Admission: Free. A $10 suggested donation per day helps keep the festival free. Food, beverages, marketplace handcrafts and merchandise will be for sale.

Parking: Three parking garages will be open for a flat rate of $10 per day on a first-come, first-served basis. Because of street closures, check the festival website for specific instruction to access downtown decks.

Here's a primer for this weekend's N.C. Folk Festival in Greensboro

For many of us baby boomers, his music was the soundtrack to our lives. Booker T. Jones laid down a Memphis groove deep enough to wallow in, d…