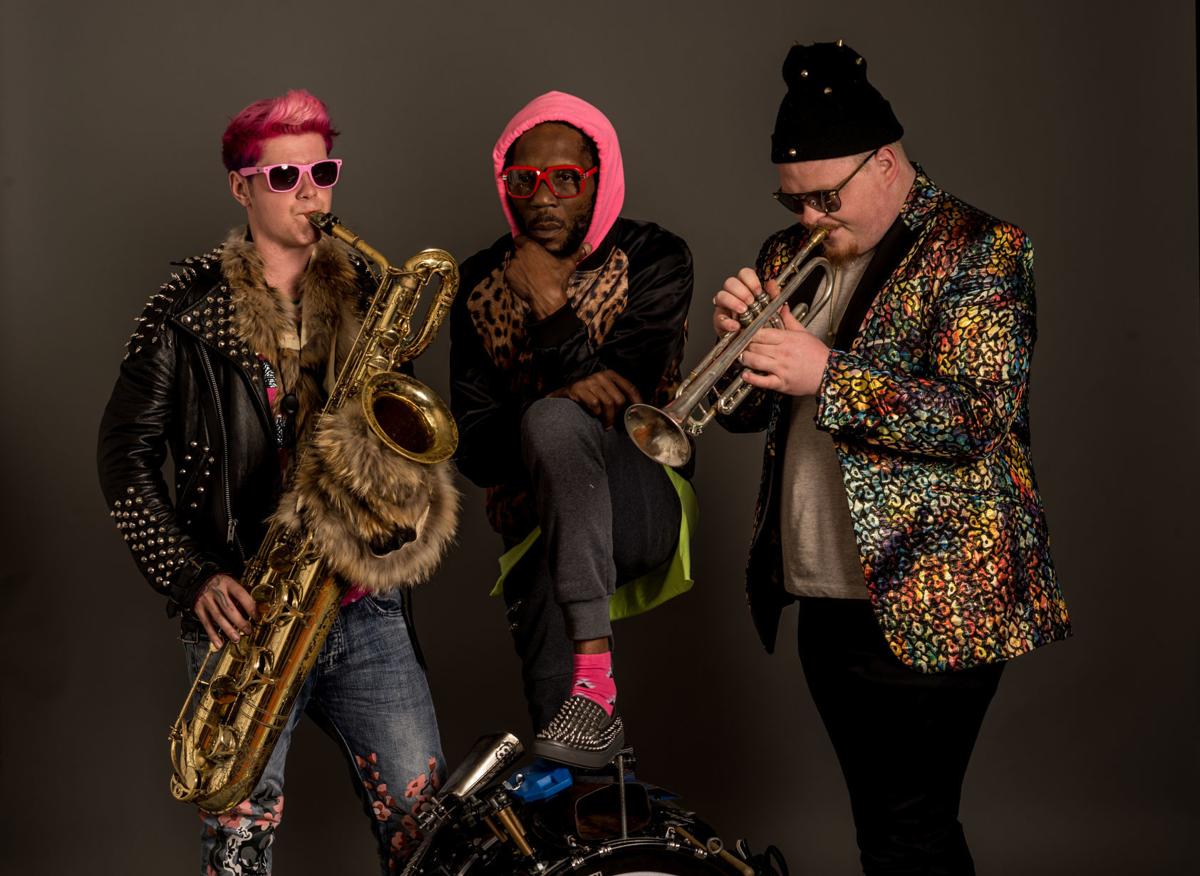 Too Many Zooz is Leo “Leo P” Pellegrino (from left), David “King of Sludge” Parks and Matt “Doe” Muirhead. The group will play at The Blind Tiger in Greensboro. 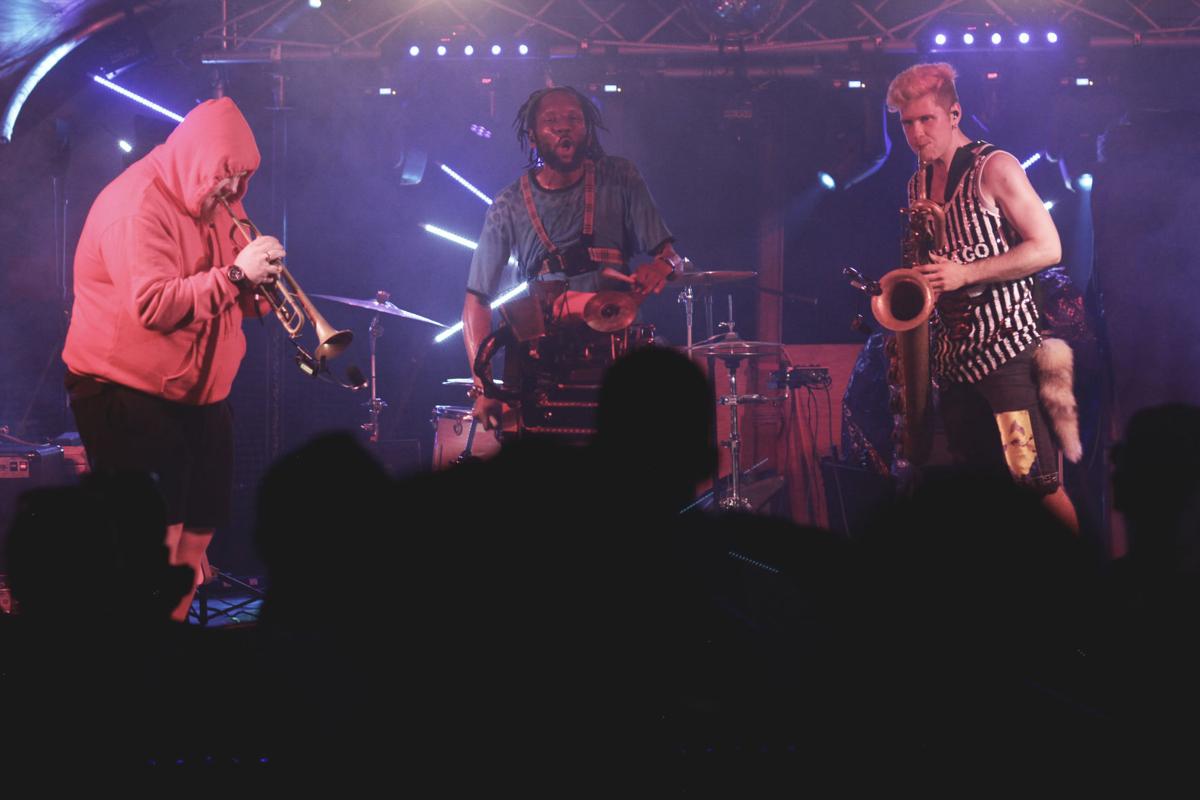 Too Many Zooz is Matt “Doe” Muirhead (from left), David “King of Sludge” Parks and Leo "Leo P" Pellegrino. The group will play at The Blind Tiger in Greensboro.

Too Many Zooz is Leo “Leo P” Pellegrino (from left), David “King of Sludge” Parks and Matt “Doe” Muirhead. The group will play at The Blind Tiger in Greensboro.

Too Many Zooz is Matt “Doe” Muirhead (from left), David “King of Sludge” Parks and Leo "Leo P" Pellegrino. The group will play at The Blind Tiger in Greensboro.

His unique dance moves, 360 degrees of spinning, honking flash and rumble, made baritone saxophonist Leo Pellegrino a standout in the NYC subways where he used to busk for a living.

Backed by David “King of Sludge” Parks’ Afro-Cuban drum rhythms and Matt “Doe” Muirhead’s scathing trumpet, the trio, under the moniker Too May Zooz, quickly attracted a sizable following worldwide with their unique arrangements and energetic performance style initially posted on YouTube by NYC subway denizens.

Pittsburgh native Pellegrino got a degree from Manhattan School of Music, where he met trumpeter Muirhead. Parks and Pellegrino had previously played together in another subway busking band, the Drumadics. Too Many Zooz was officially kicked off in 2014, dubbing their sound brasshouse to encompass the brassy, horn-fueled rhythm and lead with a whomping sinuous backbeat. Muirhead has said that his role is not to play traditional lead, but to take the role of a synth floating over the top of Leo’s baritone, which acts as the bass in the trio.

But this is no conventional trio. Pellegrino is a James Brown dance disciple, a whirling, flashing mass of energy careening around one-footedly, honking frantically as Parks beats the bottom end out of a cymbal/cowbell/jam block/ bass drum kit that looks held together with duct tape and determination, while Muirhead stands rooted to one spot spinning out stratospheric shout-outs to Dizzy Gillespie’s funky, fiery spirit.

Thanks to videos captured by subwayers, Beyonce saw the trio and recruited them for 2016’s “Lemonade” on two cuts — “Daddy Lessons” and “Formation” — as well as bringing them along for a bizarre appearance on the 2016 CMA Awards performing “Daddy Lessons” alongside the Dixie Chicks, a confabulation that confounded country fans and Beyonce’s base as well.

The group welcomed all the attention, which has brought them out of the tunnels of NYC to worldwide acclaim, but recently, they found out that some of their flashy mojo had been usurped without their approval. Tim Sweeney’s Cary-based company Epic Games, purveyor of the video game “Fortnite,” rated as one of the most popular games on the planet, uses an animated character in the game that is obviously based on Pellegrino, a spinning sax player who looks and dances exactly like the Too Many Zooz honker. But he says he was never contacted about using his image.

“People just started texting me and calling me and going, ’Yo, you’re on the new ‘Fortnite’ game,’” Pellegrino said recently by phone from the road. “And then a lawyer talked to me, and he was like, ‘I think you should sue them.’ And I was like, ‘OK,’ so we’re in the middle of a lawsuit. They’ve delayed trial three separate times. My lawyer thinks it a good thing, but we keep on going to trial, and I’d really like to state my case.”

While he waits for his day in court, Pellegrino states his case through live performances and on the band’s latest video, “Car Alarm.”

A would-be carjacker is shown attempting to boost a truck from a loading dock, fleeing when the onboard alarm starts to sound. Pellegrino shows up first, honking counterpoint to the alarm’s blaring, then the King of Sludge pops up from the truck bed to provide a funky backbeat. The camera pans around the truck to reveal Muirhead in the driver’s seat stepping out to blow some over-the-top high toned scats. But just as they’re all really getting in synch, the alarm quits mid-performance, the trio staring disgustedly at the failed prop till the King gives the truck bed a stomp and a whack on the top of the cab with his hand to restart the show. Their frustrated reaction looks genuine, as Pellegrino confirms.

“The issue was that when we started practicing with the car alarm, basically it wouldn’t go for that long, so we had to restart it. So we knew that was gonna happen, but it wasn’t necessarily something we wanted,” he says. Still, their reaction and their quick recovery makes the clip all the more enjoyable.

Ironically, Pellegrino’s dance moves, inspired by watching Michael Jackson as well as Brown, were discouraged by his music teachers, telling him that moving around a lot while playing would mess up his tone and limit his range. But the saxman discovered early on that the moves got more attention than the tones.

“I used to work on Carnival Cruise Lines, and no one was there to tell me how to play,” he says. “When I would dance, more people would come to the shows, more people got into it, so I just kept dancing. That was the first time. Then, when I started playing in the subway, the more I danced, the more money I made. So I started dancing a lot.”

His message is a simple one, delivered with soul and some funky dance steps. Pellegrino says he wants to be remembered as an entertainer who made people happy, made them forget about their problems and filled them with soul.

“Someone that speaks to the people through their instrument and helps people get through the issues and the reality of life.”

Fortnite Steals Dance Moves From Leo Pellegrino of Too Many Zooz

What: Too Many Zooz in concert with Briocratic