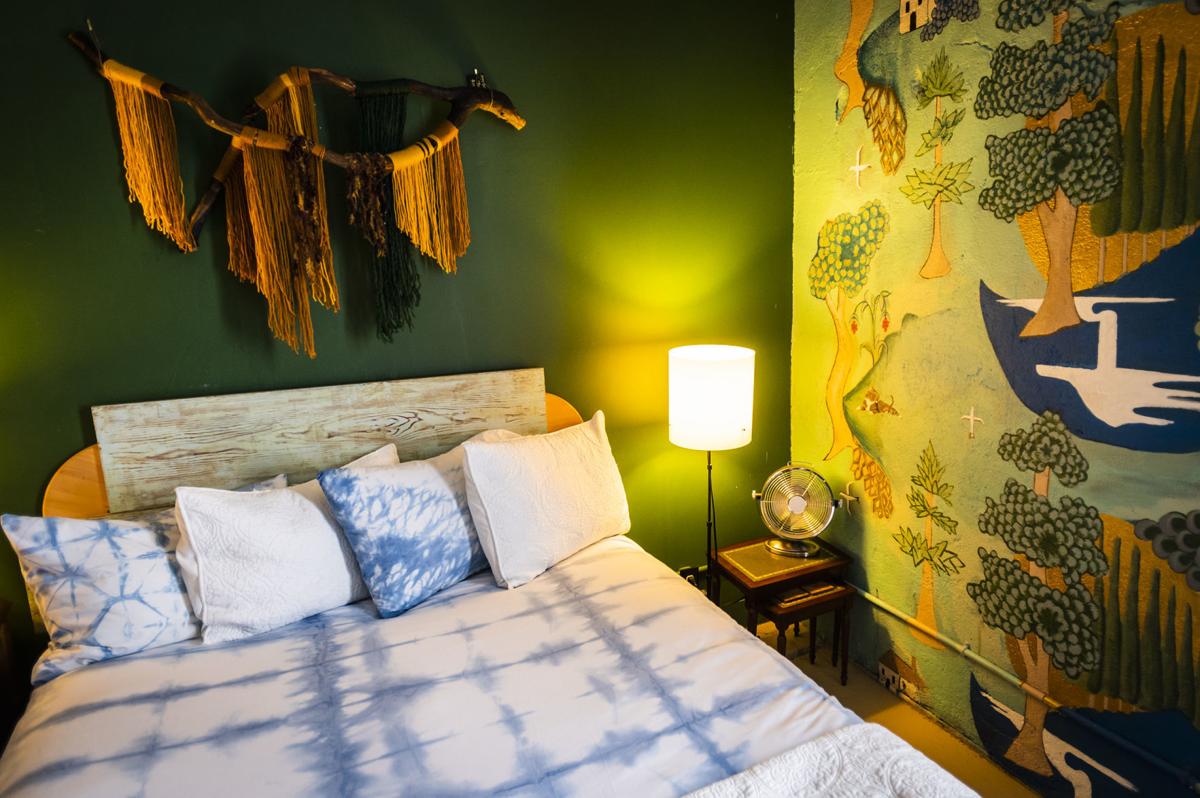 The Green Room, one of five rooms available for rent in the Wherehouse Art Hotel, currently has yarn art by Amy Cruz. The mural and headboards are by Haydee Thompson, the hotel’s owner and curator. 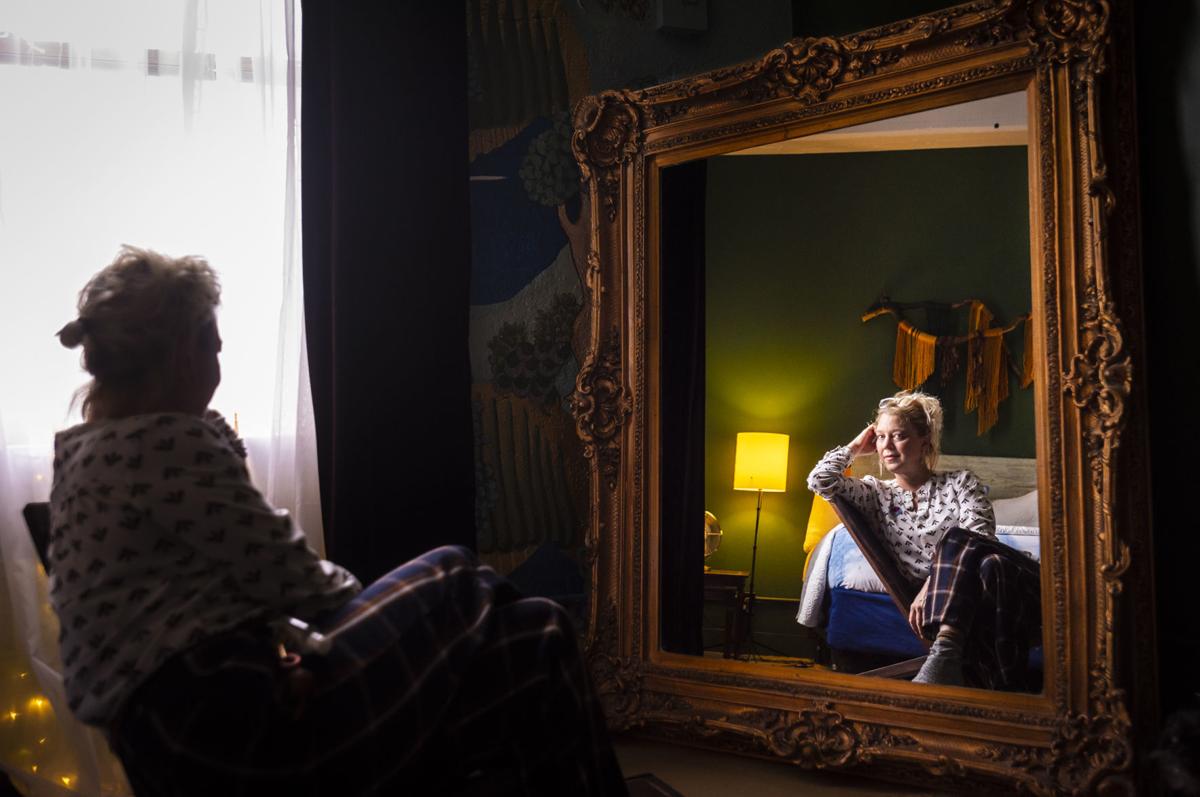 Haydee Thompson, owner and curator at Wherehouse Art Hotel, sits for a portrait in the Green Room. Andrew Dye/Journal 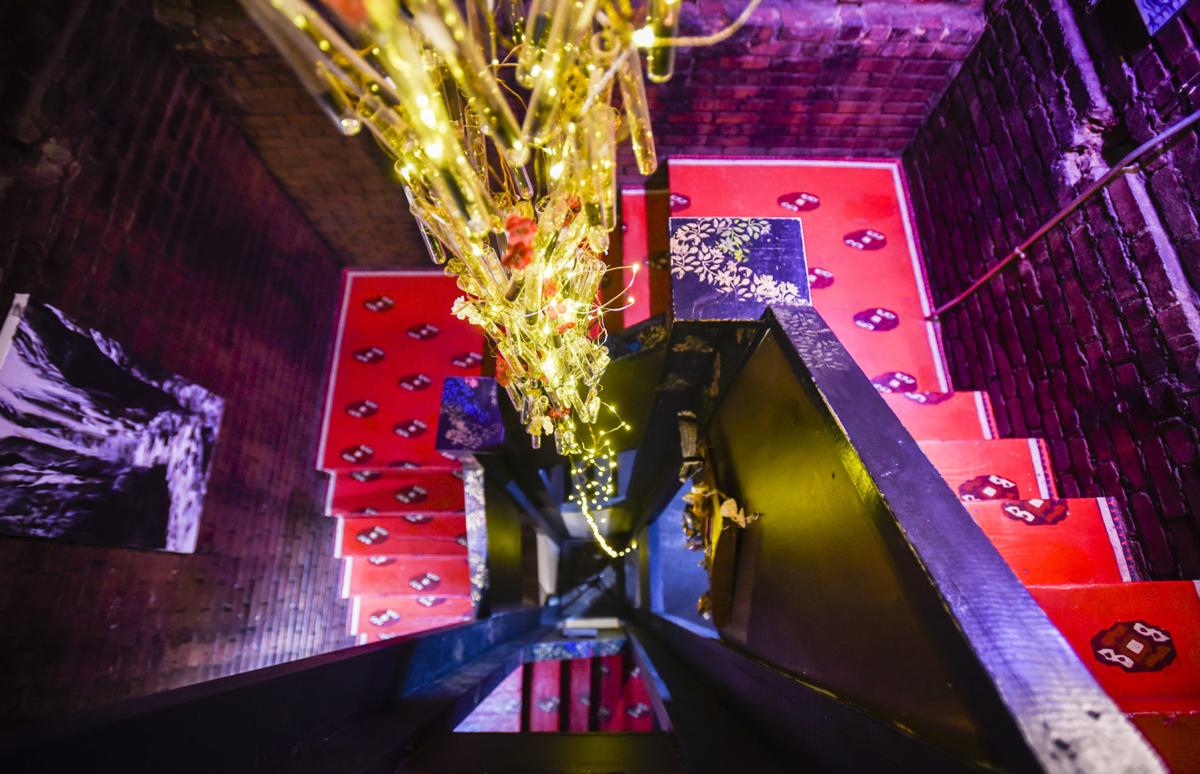 The stairway to the Wherehouse Art Hotel features a handcrafted chandelier by owner and curator Haydee Thompson. 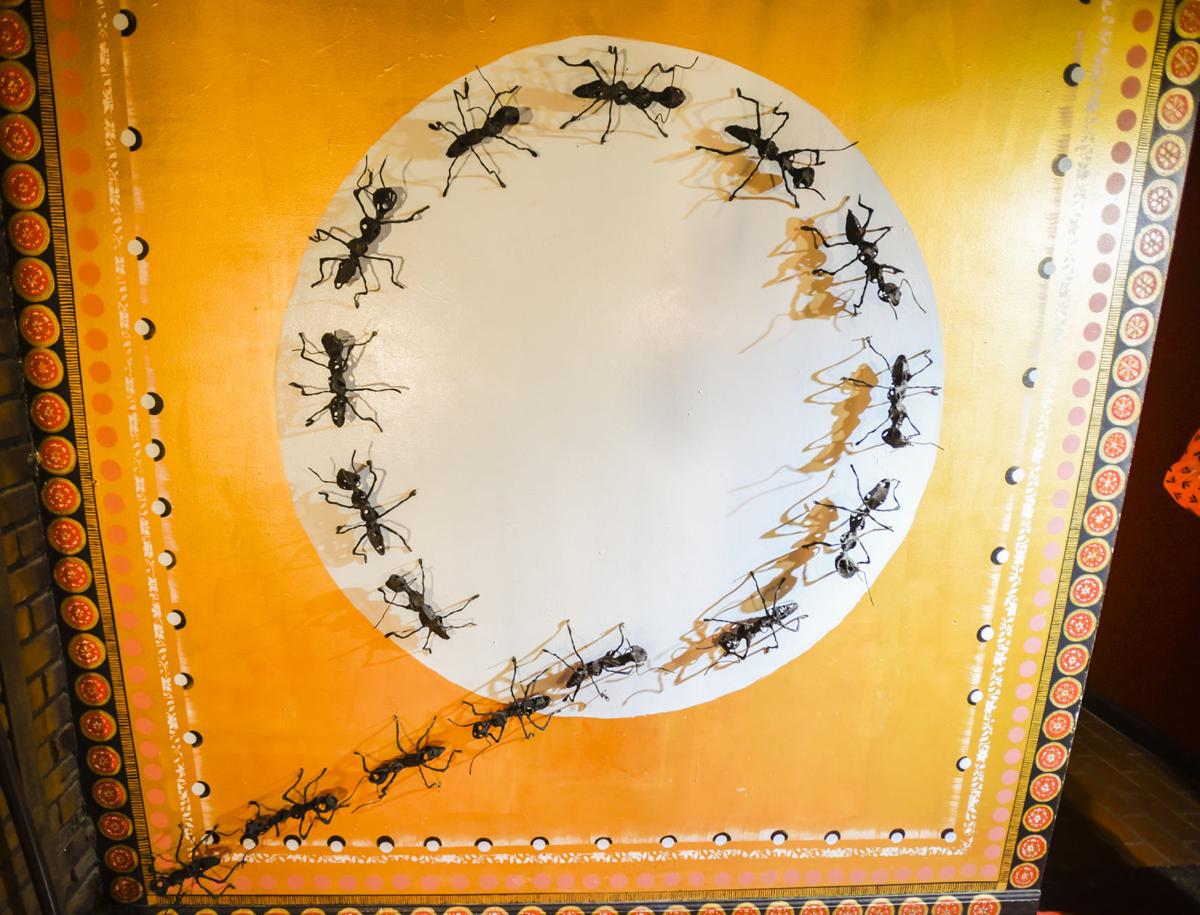 Ants by Nicole Uzzell greet guests as they arrive at the top of the staircase leading to the Wherehouse Art Hotel. 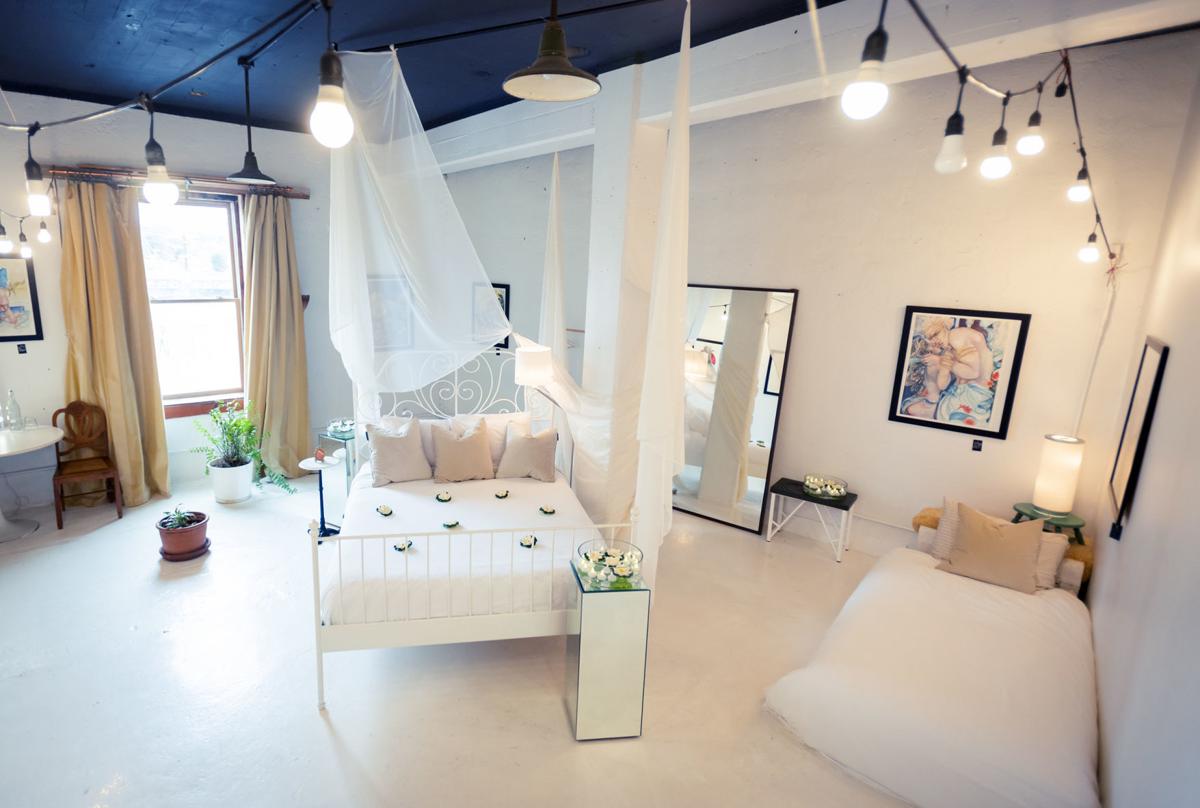 The Gallery Room was one of five rooms available for rent in the Wherehouse Art Hotel before it closed for COVID-19.

The Green Room, one of five rooms available for rent in the Wherehouse Art Hotel, currently has yarn art by Amy Cruz. The mural and headboards are by Haydee Thompson, the hotel’s owner and curator.

Haydee Thompson, owner and curator at Wherehouse Art Hotel, sits for a portrait in the Green Room. Andrew Dye/Journal

The stairway to the Wherehouse Art Hotel features a handcrafted chandelier by owner and curator Haydee Thompson.

Ants by Nicole Uzzell greet guests as they arrive at the top of the staircase leading to the Wherehouse Art Hotel.

The Gallery Room was one of five rooms available for rent in the Wherehouse Art Hotel before it closed for COVID-19.

WINSTON-SALEM — Hospitality is an art form, and in a perfect storm of art and innovation, Haydee Thompson has transformed about 3,000 square feet above Krankies cafe into one of the most successful Airbnbs in Winston-Salem — and an art gallery.

Five rooms, with walls covered by art from local artists, comprise the Wherehouse Art Hotel where Thompson, 49, an artist, actor and musician, is also helping local artists sell their work, taking only 20% instead of the traditional 50% gallery fee.

On Wednesday, Thompson will open all of the rooms for public view. That rarely happens, because the rooms are usually occupied.

The Gallery Room will host “INDIA, From an Intimate Distance,” an installation by Greg Vore, an artist from New York City. His pictures have been published in National Geographic, The New York Times, Vogue, Vanity Fair and The New Yorker, to name a few.

Although it’s not a requirement, many of the artists who have work in the hotel have a personal connection with Thompson. In Vore’s case, he was a directing student at UNC School of the Arts when she was studying acting there.

About once a month, Thompson turns the Gallery Room over to a different artist to create an installation by re-arranging the furniture and decorating it however she or he likes, with final tweaks by Thompson to be sure the hotel guest will have reasonable amenities. Plus, the artist gets a percentage of the booking fee for that room.

Last week, it was still in Valentine mode with the queen bed in the center of the room.

Artist Hayden Sharpe had arranged gauzy white drapes around the bed that emphasized the room’s airiness and openness. Faux lily pads with fairy lights floated in containers of water. Sharpe’s art work — watercolor figures in attitudes of intimacy — hung on the walls.

Besides the wall art, the rooms are furnished with objects that are either handmade or decorated by artists. In the Green Room, yarn art by Amy Cruz reflects the colors in a wall mural painted by Thompson and headboards made by her.

Large paintings by Laura Lashley adorn the walls of the Screening Room.

While the focus on visual arts is obvious, Thompson tries to provide opportunities for performing artists as well. The exhibition openings are most often parties with local bands playing.

Twice a year, the Art Hotel breaks out of its boundaries with a Wherehouse Art Mart at The Ramkat on Ninth Street. It’s a festival of art, fine crafts and music. “That helps us flesh out our performing arts piece,” she said. “But we keep the art and the music a little separate so people can haggle and talk.”

Thompson, who has an assistant in the business, Tessa Evans, also does pop-up exhibits in places like the Washington Park Barbershop, The Canteen, and in Krankies.

Before she moved into the Wherehouse 18 years ago, Thompson got experience for what she’s doing now in a pretty unusual job.

From 1997 to 2001, she was personal assistant to David Byrne (Talking Heads) and his former wife, the artist Adelle Lutz, in Manhattan.

“I learned a lot living and working there that translates to the work I do now at the WAH,” she said. “Mindfulness, for objects and things. Having intentional and energizing relationships with inanimate objects. Curating a space in a tactile and natural way. Feng shui!”

Feng shui is a system of guidelines, in Chinese philosophy, that govern spatial arrangement and orientation in relation to the flow of energy.

Thompson grew up in Pennsylvania and Virginia. Her parents met when they were both actors, and her father later became photographer.

“I was taught at an early age to appreciate art,” she said. She worked for a while with the Open Dream Ensemble, a company of UNCSA alumni who do multi-disciplinary performances for young people, did other professional theater, waited tables and played in bands.

“This is the first time I haven’t worked for anyone else,” she said.

The building — variously called The Wherehouse, The Werehouse, PS211 or Krankies — has played a key role is Winston-Salem’s downtown rebirth over the past 20-plus years. Thompson has lived there for 18 years.

“The Wherehouse was founded in the mid-1990s when there was nothing around here,” Thompson said. “It used to be an artists collective. It was a combination of people growing up and moving out of their parents’ houses.

“It was a real community of artists.”

The community was founded in 1996 by John Bryan, Eric Jackson, Chris Leister and Brian Doub, artists and entrepreneurs, as a place to foster and experience original and thought-provoking art.

Artist and musician Liz Simmons, 48, and Teresa Blackman moved to Winston-Salem from Statesboro in 2002 and moved into the Wherehouse on Halloween 2003.

“Only another couple of girls had lived there,” Simmons said. “We had to pitch ourselves to every single person who lived there.”

For about 10 years, the downstairs area was a continually changing round of house parties and concerts by local bands and national acts like Cat Power, Will Oldham and the Bindlestiff Family Cirkus.

“After a while, that disbanded,” Thompson said. “And the neighborhood started to change.”

Now the downstairs holds Krankies, a cafe that serves coffee, adult beverages, brunch or small plates from 7 a.m. to 10 p.m., till 3 on Sundays.

Shouting distance from the Downtown Arts District and Fourth Street to the West, since about 2011, the Wherehouse has seen the addition of the Innovation Quarter, an area of residential lofts, science laboratories and collaborative work spaces to the South and East.

“Artists are the first cultural responders. They’ll move into areas that are not yet discovered,” Thompson said. “Then developers will start developing, taxes go up and the artists and the arts community eventually get pushed out.

“Business-wise, this has been an experiment in how to survive. Now, we are working with the system, not against it.”

Not surprisingly, creatives in all kinds of fields are attracted to the hotel: a lighting designer for Helen Simoneau Danse; scientists applying for jobs in the Innovation Quarter; filmmakers who come for RiverRun International Film Festival; and people who come for the National Black Theatre Festival all stay there.

“The difference in this and other galleries is that the guests spend the night with the art,” Thompson said. “They can see what it feels like to live with it.”

Guests can also cook or hang out in an expansive public space that is also used for parties and events.

A hallway leading from the shared space to the private rooms is covered with portraits by MaryAnn Zotto of current and former residents.

“They are the guards,” Thompson said. “For so many years, the Wherehouse was pretty exclusive. If you made it to the Wherehouse, people thought you were special.

“By keeping the art and the rooms affordable, everyone can be part of it now.”

Nolan, 37, started hanging out at the Wherehouse when he was about 13, he said. Most of the other people were older than he, and he saw them as his big brothers and sisters.

“I started an art gallery there in 2004, and played shows there,” said Nolan, a multi-instrumentalist. “I was a miscreant youth, and it was a place where miscreant youth could go and be themselves and feel accepted.

“You think you have to go to New York to find that. So it’s cool to go to downtown Winston-Salem and find something that cool and original happening.”

Thompson said that the hotel is one of the most successful Airbnbs in town. Samuel Randall, a spokesperson for Airbnb corroborated that, saying that the Wherehouse rooms are in their Top 5 of the most wish-listed accommodations in Winston-Salem.

“The whole deal is to sell art for artists to people who want it,” Thompson said. “And we’ve been doing a good job of it.”

“I think Haydee has captured that slice of history, and she’s keeping the weird Winston-Salem alive,” Nolan said. “It’s doing great, and it’s so cool.”

Simmons said, “The WAH is like a grownup version of the Wherehouse. Haydee truly celebrates so many artists. There’s no other place like it in town. It’s not a hell-raising place any more, but it’s still hell-raising on a psychic plane.”

What: "INDIA, From an Intimate Distance," by Greg Vore.

Where: Wherehouse Art Hotel, above Krankies, 211 E. Third St., Winston-Salem. All the rooms will be open for viewing.

To view a photo gallery, see this story at Greensboro.com.