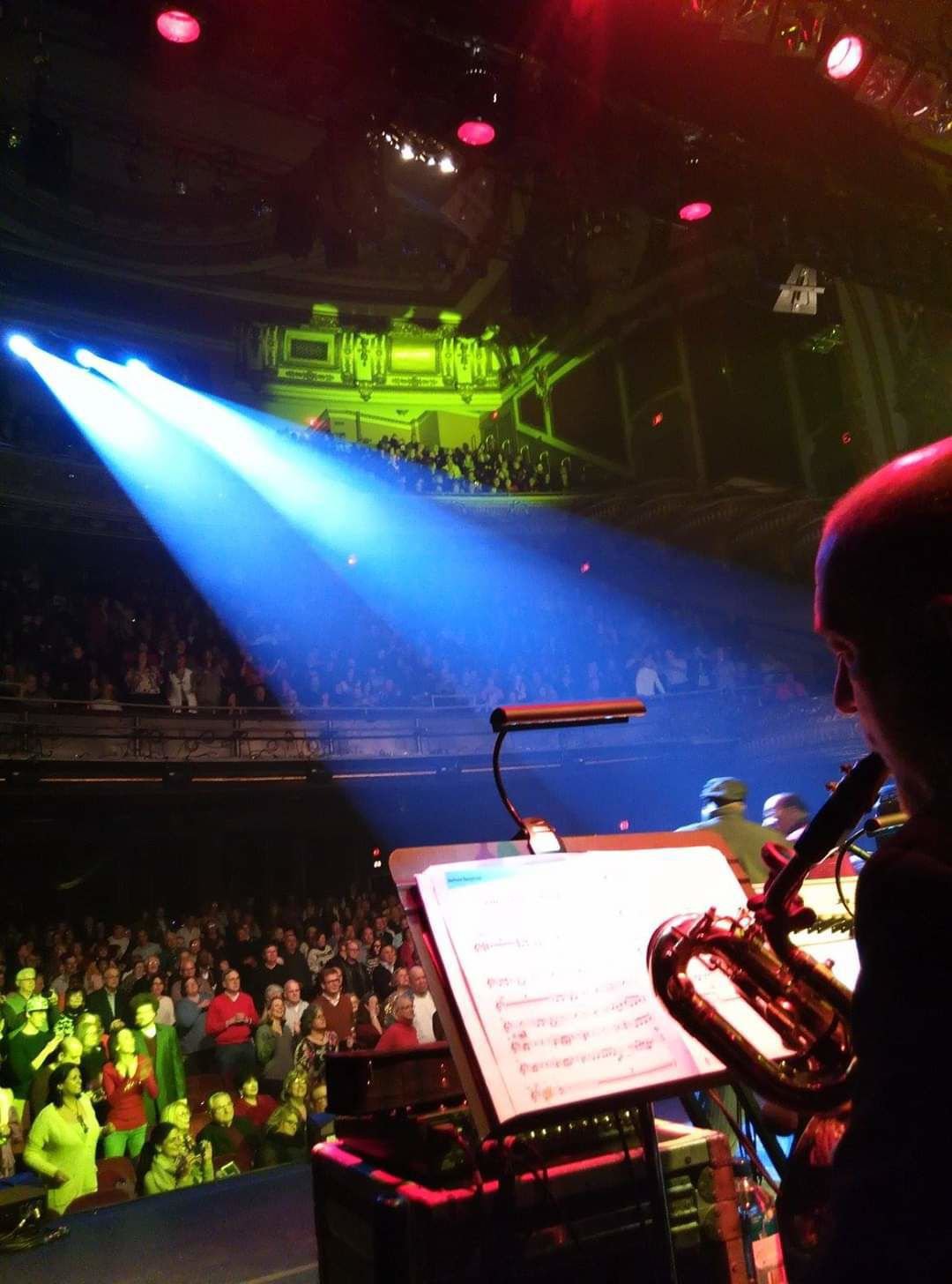 Saxophonist Scott Adair plays before a live audience. Adair’s Carolina Horns play with The Four Tops and The Temptations. 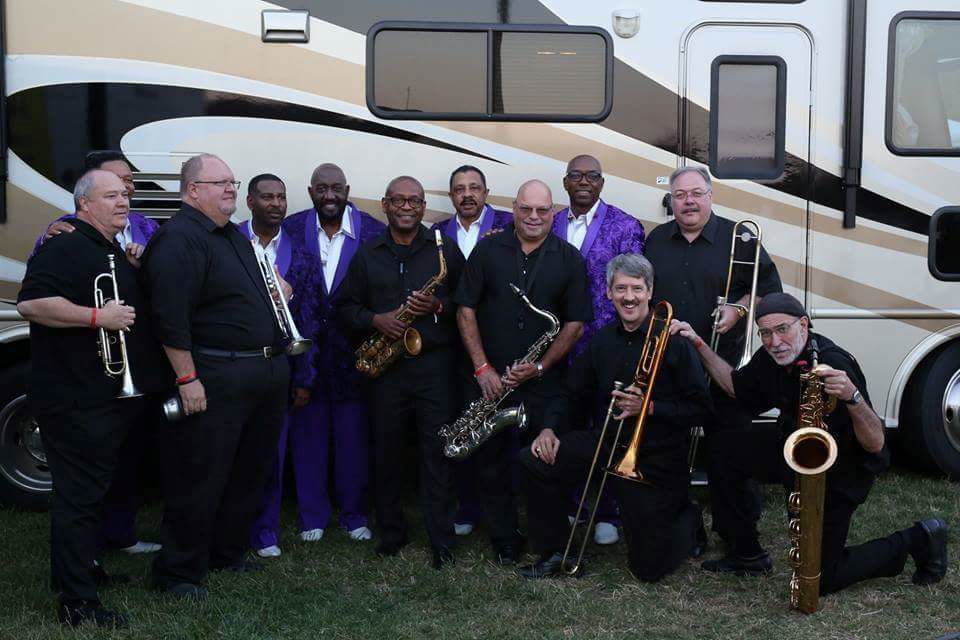 Scott Adair and his Carolina Horns often back the Four Tops and the Temptations.

Saxophonist Scott Adair plays before a live audience. Adair’s Carolina Horns play with The Four Tops and The Temptations.

Scott Adair and his Carolina Horns often back the Four Tops and the Temptations.

Ask local saxophonist Scott Adair how he got to the top of the heap as a music man for all occasions, and he fires back with a reply as tight and succinct as his horn riffs: “I got two words for ya. Self- promotion.”.

For the past 40 years, if you needed a musical backdrop for any occasion, Adair was your man. His “have honk, will travel” attitude made him the go-to guy for wedding receptions, company parties, country club gigs — what he called GB, or general business, gigs.

Adair was born into the music business. His grandfather founded Moore Music Co., and his dad ran the company before retiring in the 1980s. Adair worked in the store while in high school, and the young saxophonist-pianist also moonlighted in local soul and R&B band CC and the Souls.

“If we did a full-blown show, it would be Scott Adair dance band with either five or six pieces, could take it down to quartet, then for background music and for lighter music, we could do a trio, and did a helluva lot of duos and did a fair amount of solo piano work.”

He also toured with the Tommy Dorsey Orchestra and taught music as well, schooling many area players for future GB gigs.

But for the past 30 years, Adair has been a large support beam in the musical wall holding up the Four Tops and the Temptations. Starting out as sideman for several years, in 2009 Adair was asked to contract one of the preferred horn sections the Tops and Tempts use on tour, as well as to contribute baritone sax behind the two groups, who often appear together as The TnT Show. Now, Adair books and leads a 10-piece horn section that backs the two groups all over the country.

It ain’t an easy task. Every gig requires 10 horn players. That’s tough enough, but finding 10 guys with meshing schedules than can town-hop for several days straight and not kill each other after being crammed in a van and driving for hours is rough.

“Part of the legacy of this horn section is that we are true road dawgs,” Adair says, noting that it’s not at all uncommon for them to finish playing a gig on Long Island in New York and drive the nine-hour, 580-and-change miles home that night.

“I call these guys the hardcore road rats, the Carolina Seals — just like the Navy SEALS,” Adair says. The Seals even have a tongue-in-cheek manifesto, “What It Takes to Be A True Carolina Seal,” put together by Adair. A few highlights include the No. 1 rule: “Don’t even consider it unless you can stomach riding in a crowded van for up to 12 to 15 hours without complaining or moaning.” In addition, “You must accept the fact that your compensation will rarely be what you deserve and yet you carry on without whining. You must function at a peak level with very little or no sleep. You must accept the fact that your dressing room is quite often the men’s room, if you’re lucky. You must realize that getting lost with vehicular problems is just a part of the process. You must be able to tolerate degradation, humiliation and insubordination.”

Once a prospect gets over those obstacles, Sealdom is in reach. But the saxophonist offers a caveat: “I hate to make this sound so awful because the rewards greatly surpass the sacrifices.”

The Four Tops and the Temptations usually fly to the gigs, and the crew has beautiful tour buses with bunks. But the horn section is ranked lower in the accommodation department. “We’re in our cars chasing them up and down the highway, and it takes a true Carolina Seal to do that,” Adair says. “But we do it because we love it.”

Initially called the Scott Adair Orchestra, the group was re-christened one night by one of the longest-serving Temps, Ron Tyson, a Monroe native who covers the falsetto voice Eddie Kendricks used to sing.

“When he introduces us, he’d turn around and say, ‘Ladies and gentlemen, put your hands together for my Carolina Horns.’ And as he said that, I said, ‘That’s it. We’re gonna call it the Carolina Horns.’ ”

Adair frequently has flashbacks recalling when he was just starting out with CC and The Souls. “The first song we learned was ‘Ain’t Too Proud to Beg,’ 54 years ago,” he says. “I play it on every Temps show to this day … still love it. By the way, they sound better than we did.”

The Carolina Horns are staffed with a few 30-year vets, but the remainder of the corps has pulled enough time to become decorated as a Carolina Seal. Saxes: Tim Gordon and Doug Henry (of Charlotte) Jack Murray (of South Carolina) and Scott Adair (baritone sax) and Evan Thee (of Greensboro). Trumpets: Rusty Smith and Benjy Springs (of Greensboro), Jay Meachum (of King), Brad Wilcox (of Charlotte) and Ron Turner (of Atlanta). Trombones: Keith Johnson (of Gastonia) and John Driver (of Landis).

Over the years, The Carolina Horns have visited Carnegie Hall, the Palace Theatre on Broadway and the Ryman Auditorium in Nashville, as well as playing at one of the inaugural balls for the Clintons at the Smithsonian in January 1993 and playing for George W. Bush.

But there’s one item on the saxophonist’s wish list left unfilled.

“I said before I die, the one gig I want, we were scheduled to perform at the Tanger Performing Arts Center on Sept. 25, and I’m thinking that might not happen,” Adair says. “We’ll see.”