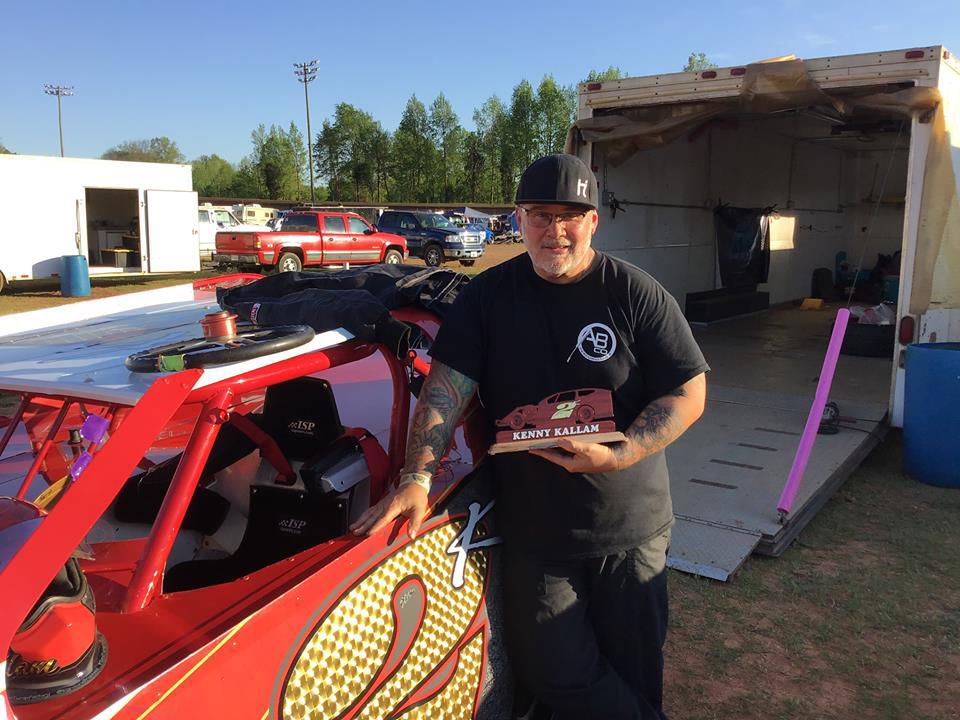 Driver of the No. 23 Waffle House Open Wheel Modified race car, Kenny Kallam has been trading paint at 311 Motor Speedway in Pine Hall for decades. 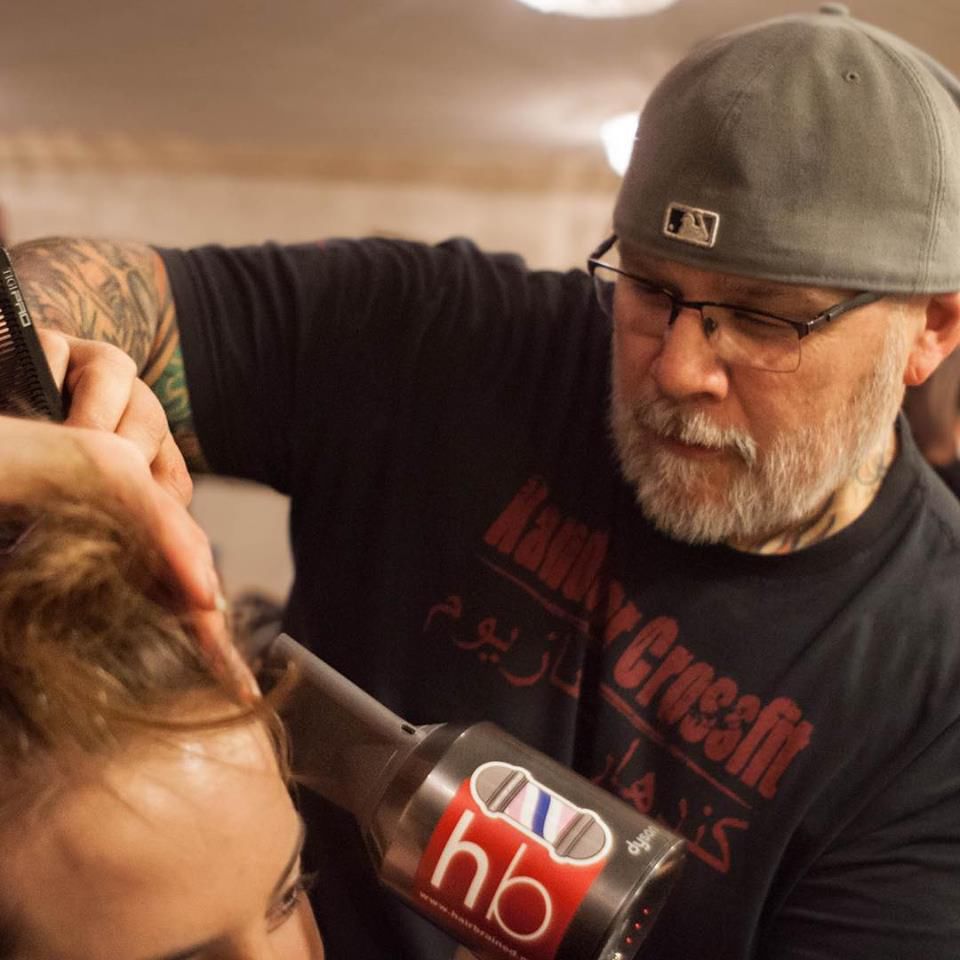 Kenny Kallam works his design magic at Boho Salon in Greensboro. “Hey, I’m just a regular guy that likes to do a lot of things,” Kallam says of his talents. 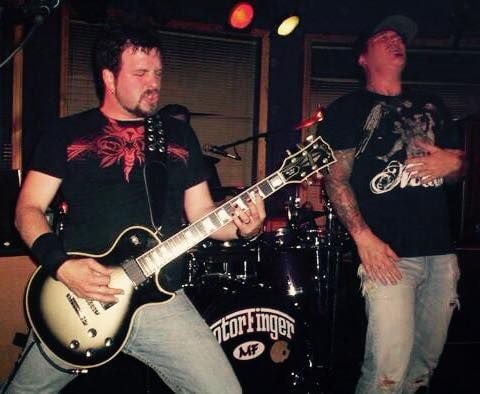 Driver of the No. 23 Waffle House Open Wheel Modified race car, Kenny Kallam has been trading paint at 311 Motor Speedway in Pine Hall for decades.

Kenny Kallam works his design magic at Boho Salon in Greensboro. “Hey, I’m just a regular guy that likes to do a lot of things,” Kallam says of his talents.

Whether it’s racing or rocking — while styling the beauties he’s profiling — Kenny Kallam has lived the life of a star.

Enjoying all the perks and thrills, while scaling perilous hills along the way, he has driven through life with his personal demons in tow.

A Reidsville native, Kallam is a man of many talents, but he’s never been one who has consciously sought out the spotlight.

In his case however, a celebratory glow has always followed his multi-faceted life.

On most weekends, from spring through the fall, you will likely find him behind the wheel of the No. 23 Open Wheel Modified race car, trading paint at 311 Motor Speedway in Pine Hall.

Known to locals as the Daytona of Dirt, the track where Kallam competes, it’s a place where he has raced for more than 20 years.

Most dirt track racers are blue-collar to the bone, and although he’s considered just another one of the guys when the checkered flag drops, in many ways, Kallam doesn’t fit the typical driver-mold.

By day, Kallam is a master stylist at Hatori Hanzo, and owner of Boho Salon in Greensboro. A veteran in the beauty industry with well over 30 years of experience, he is known as one of the best in the business. When he’s not juggling responsibilities in North Carolina, he’s often jet-setting to New York or Los Angeles as a much-sought-after guest instructor to teach the next generation of professionals.

Just like at the race track, he stands out at the salon as well. Working in a female dominated industry, you don’t typically see many burly, heavily tattooed men working at an upscale salon. But as odd as it may sound, it’s a place where he has always thrived and been embraced.

For Kallam, the career that has taken him all over the world, started right here in his own back yard. He received his degree in cosmetology at Rockingham Community College in 1989, and he said his education is something he is very grateful for.

“After high school, I really had no idea what I wanted to do. I had worked some odd jobs, mostly dig-a-ditch manual labor-type stuff — and I knew I didn’t want to do that. But I thought to myself, I like being around women and I heard you can make good money doing hair, so let’s give this a shot.”

During this same time period when he was finishing up school, Kallam was also making a name for himself on stage.

For many Rockingham County folks, he is probably better remembered as a rocking lead singer as much, if not more-so for his growing career.

A vocalist with an impressive five-octave range, Kallam is a veteran of several local bands including Vandal, Haize Rail, Suicide King, Motorfinger and Magazyne.

He got his start behind the microphone belting out cover songs in the late 1980s as a teenager and has never really stopped.

Singing hard rock and classic metal music ranging from the likes of Judas Priest, Metallica and Pantera among many others, he has wowed audiences up and down the east coast with his talent for decades.

For a number of years, Kallam split time between the salon and the stage, touring on the weekends with Suicide King, arguably the most successful of the outfits he was once a member of.

At first the band primarily did covers, but eventually the group started writing their own music and gathered a strong local following.

The way things were looking, the group thought it was only a matter of time before they got a major record deal, but unfortunately, things didn’t work out that way.

Kallam said it was a variety of factors that led to the lack of mainstream success Suicide King experienced.

Their original music was akin to bands like Queensryche — with sophisticated themes, complex arrangements and twisted thought-provoking lyrics, but it was kind of a hard-sell for the main stream audiences that were getting caught up in a new movement.

At the time, hair metal was on the way out, grunge was the new fad, and Kallam’s band was neither, and they got lost in the shuffle. After years of toiling and touring on the local circuit while waiting on their big break, the guys eventually disbanded.

Kallam went back to doing cover songs just as a creative outlet and even took a turn to acting, as he landed the lead role of the stage production in Jesus Christ Superstar which ran at the Carolina Theater in 1995. That led to more gigs with the North Carolina Theater in Raleigh and some other projects in Washington D.C., but ultimately, he was getting pulled in too many directions and had to make a decision to pursue one career or the other.

Juggling the stage, salon and music, he ultimately decided acting wasn’t the right way to go.

Between racing, rocking and his career, Kallam was living an exciting life, but he admitted he was burning the candle at both ends too.

The rebellious nature of being a heavy metal singer, combined with his local fame, made him an exciting guy to be around. Understandably, that popularity, and the endless rounds of free drinks that ensued, led to what has almost become a cliché destination in the entertainment industry.

For decades, he battled the bottle, but it was something he was able to disguise to a degree for most of his adult life.

On the outside, he seemed to have it all — a thriving career, a beautiful wife in Melissa Clark Kallam, tons of friends and adoring fans to boot.

But he said at some point, the party stopped being fun. He became a blackout drunk and over the years, there were many nights completely lost, wiped from his memory.

“I’d have people come up to me and tell me about some shows and the crazy things we did together and I would just smile and try to play it off because I had no memory of it at all,” he said.

“It’s a scary thing and I was turning into a person I just didn’t like or respect anymore. Here I am — I’ve got this beautiful, smart, loving wife, a successful career and I felt like I was on the verge of throwing it all away. I am getting drunk and disrespecting and hurting her and the people around me. For me, that was it. It was at that moment that I realized, first of all, I’m really lucky, and two — she could leave me and then who would I be? She’s my life. She’s my love and I want her to know that she is more important to me than anything,” he said.

A life and gift

With the help of Alcoholics Anonymous, his Christian faith, and the support of Melissa, he quit drinking cold turkey in 2017 and he says now, life is better than ever.

Now-a-days he tries to stay away from the bar scene as much as possible, and he’s cut back on the number of rock shows he does. But music was his first love, and every now and again, he is coaxed back on stage.

“In many ways, music saved my life. My parents split up when I was a kid and music kind of became my salvation. It was my way to understand how to make it through tough times and it was something that made me feel good about myself. I have always liked to entertain people and make them enjoy themselves. It’s kind of like that with my job and racing too.”

Whether it is on stage, in the salon or at the track, Kallam said he likes to stay busy and he’s never been one to let all of the attention or recognition go to his head. He’s always stayed humble.

“Hey I’m just a regular guy that likes to do a lot of things. I’ve been very blessed to be able to do the entertainment thing and if you would have looked into a crystal ball and told me when I was a kid that I would have this kind of success in my life and career, I would have said you are crazy. I’m a lucky man,” Kallam said.