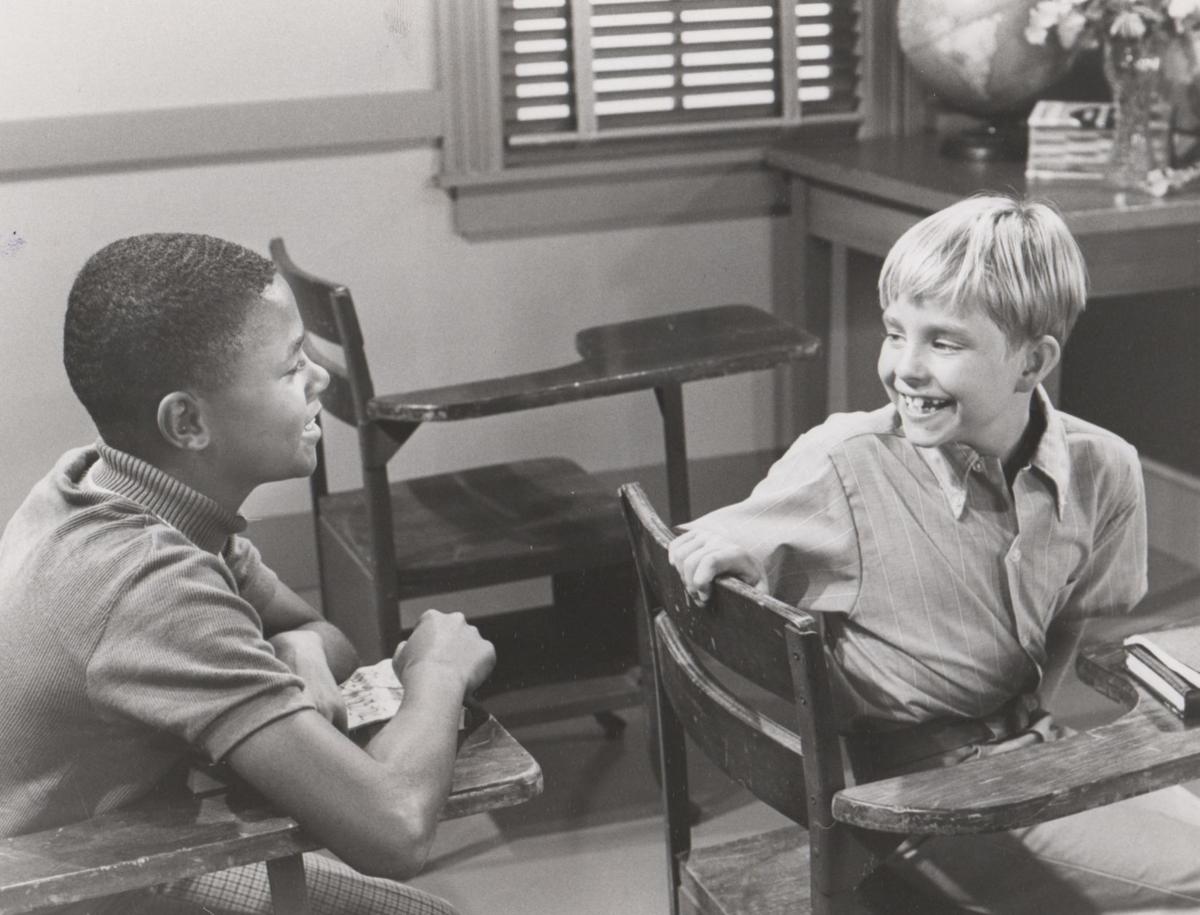 Calvin Peeler (left) and Buddy Foster (Mike Jones on the show) on the set of “Mayberry R.F.D.” 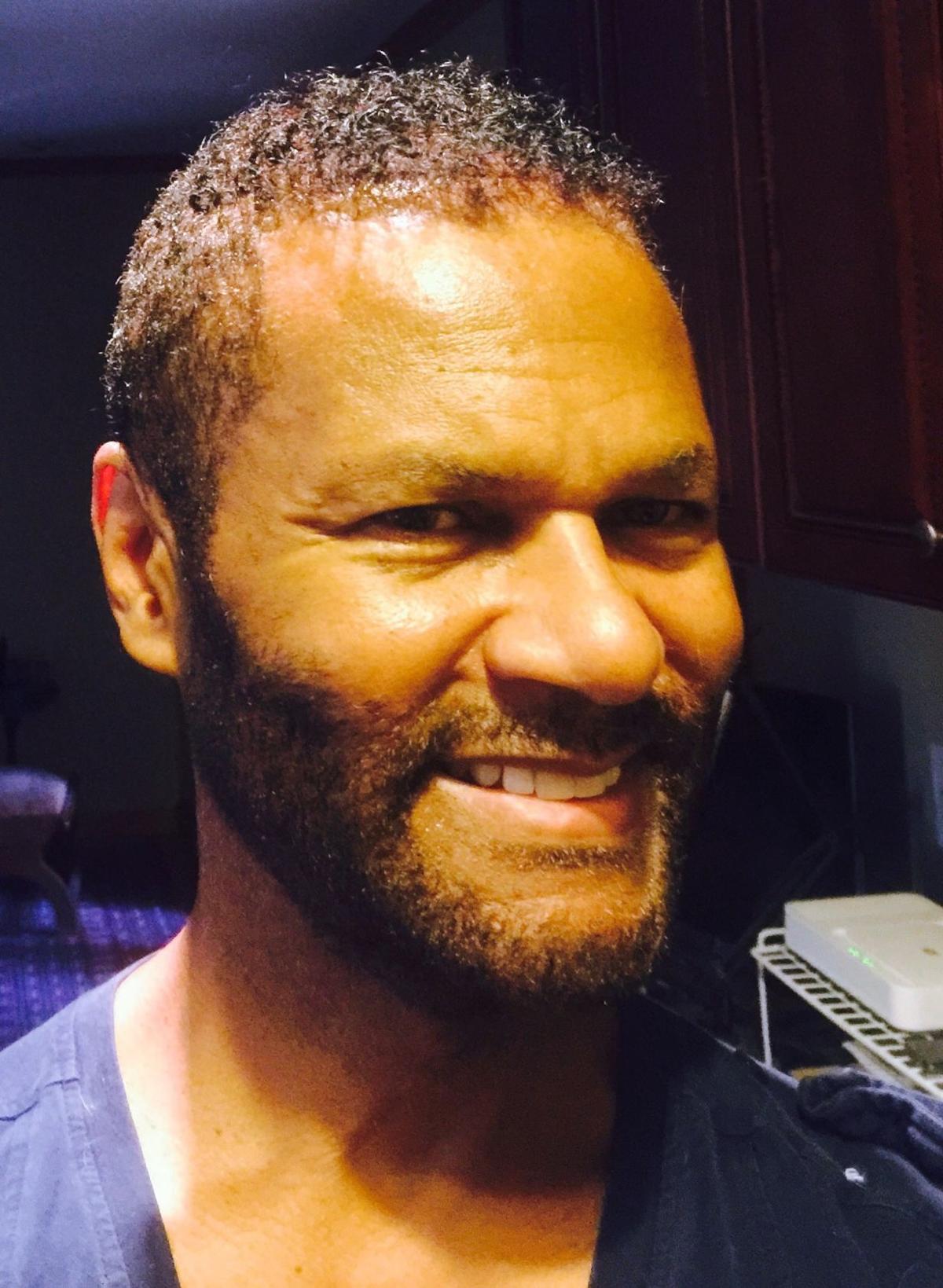 After last week’s column about “The Andy Griffith Show,” K.B. wrote in to ask “why you never see the ‘Andy Griffith Show’ episode on TV where they had their first black family on the show?”

K.B. remembered that a young man from Tennessee wrote in to the show asking why there were no black people in Mayberry, and ended up getting cast in the show. “Why is this episode the only one never played in all the reruns they play over and over?”

There’s a good reason for that: It wasn’t an “Andy Griffith” episode, so K.B. was looking in the wrong place. It is actually an episode of “Mayberry R.F.D.,” the series’ new name after Griffith left,, returning only for guest appearances. “Mayberry” is not repeated as often as the original show

I’haven’t found any stations available locally that are currently showing “Mayberry R.F.D.”; ME-TV aired some episodes last month, during its “Month of Mayberry” marathon, but the episode in question was not one of them. Episodes of the show can be found for sale on various streaming services.

Calvin Peeler, who later moved to High Point, wrote in to the show as a 13-year-old fan in 1968, suggesting they add more black characters. His letter drew the attention of Richard O. Linke, a co-executive producer and the personal manager for Griffith and several other stars of the show. Linke called and invited him to come to Hollywood on what Peeler described as “a whirlwind trip.”

The show had already made plans to add an African American to the cast in a recurring role, played by actor Charles Lampkin, and Peeler was cast in one episode as his son. Before that, there had been only one black actor in a speaking role on “Andy Griffith,” Rockne Tarkington, who played the high school football coach.

Peeler’s episode of “Mayberry R.F.D.,” titled “Youth Takes Over,” revolves around three elementary school students who shadow members of the Mayberry Town Council for a day and become interested in local politics. Many of Peeler’s scenes were with Howard Sprague, played by Jack Dodson. Peeler’s character, Martin, was one of the best friends of Mike Jones, played by Buddy Foster, who was for all intents and purposes the “Opie” of the series. Peeler recalls spending time on the set with him and his sister, actress Jodie Foster.

Peeler only appeared in one episode, though Lampkin was a recurring guest and appeared in seven episodes. Peeler thought about pursuing an acting career after that but ultimately settled back into a normal life. Several years ago, he moved to High Point to be near family and work as a consultant for a real estate development company.

Last year, Peeler was invited to Mayberry Days in Mount Airy, the annual celebration of “The Andy Griffith Show” and its spinoffs, to attend a panel discussion, autograph session, parade and other events. Last week, Peeler said he had a wonderful time at Mayberry Days “and so appreciated the warm reception and interest in my small participation in the Mayberry story.” He went on to describe it as “truly a memorable experience.”

Peeler said he is “doing reasonably well during this time of great uncertainty, as we approach another presidential election during an historic pandemic and much of our country experiences unrest prompted by George Floyd’s death in Minneapolis. Quite honestly, my emotions range daily from fear and sadness to anger and frustration and everything in between.”

“The world we took for granted has changed significantly in such a short time, and I believe it is unsettling for many of us.”

The classic variety show “The Carol Burnett Show” is now available on the Shout! Factory TV streaming service, with all 11 seasons, including many episodes available for the first time since their original broadcast. In addition to Burnett, the episodes feature such memorable performers as Tim Conway, Harvey Korman, Vicki Lawrence and Lyle Waggoner.

The service is available online at www.ShoutFactoryTV.com or on Roku, Amazon Fire, Apple TV and other apps. The service also has other shows including episodes of “The Tonight Show with Johnny Carson,” “Mystery Science Theater 3000,” various Gene Autry movies, and much more.