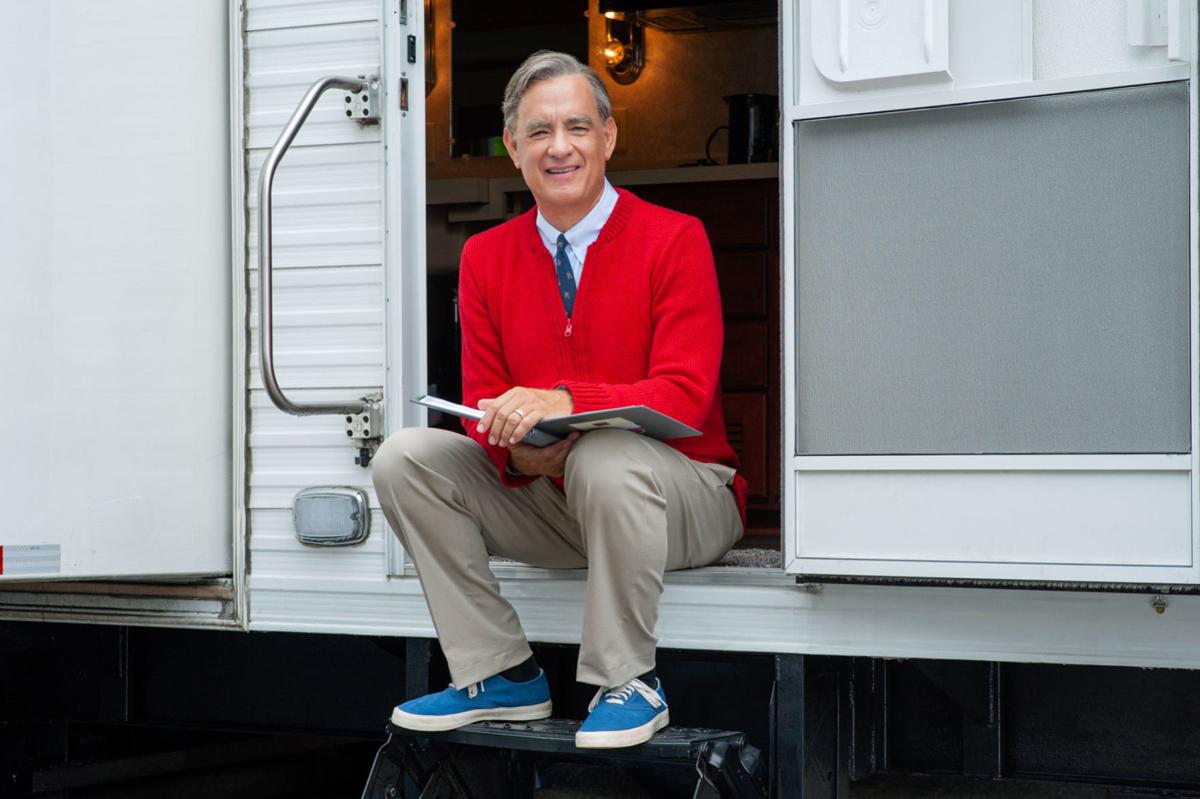 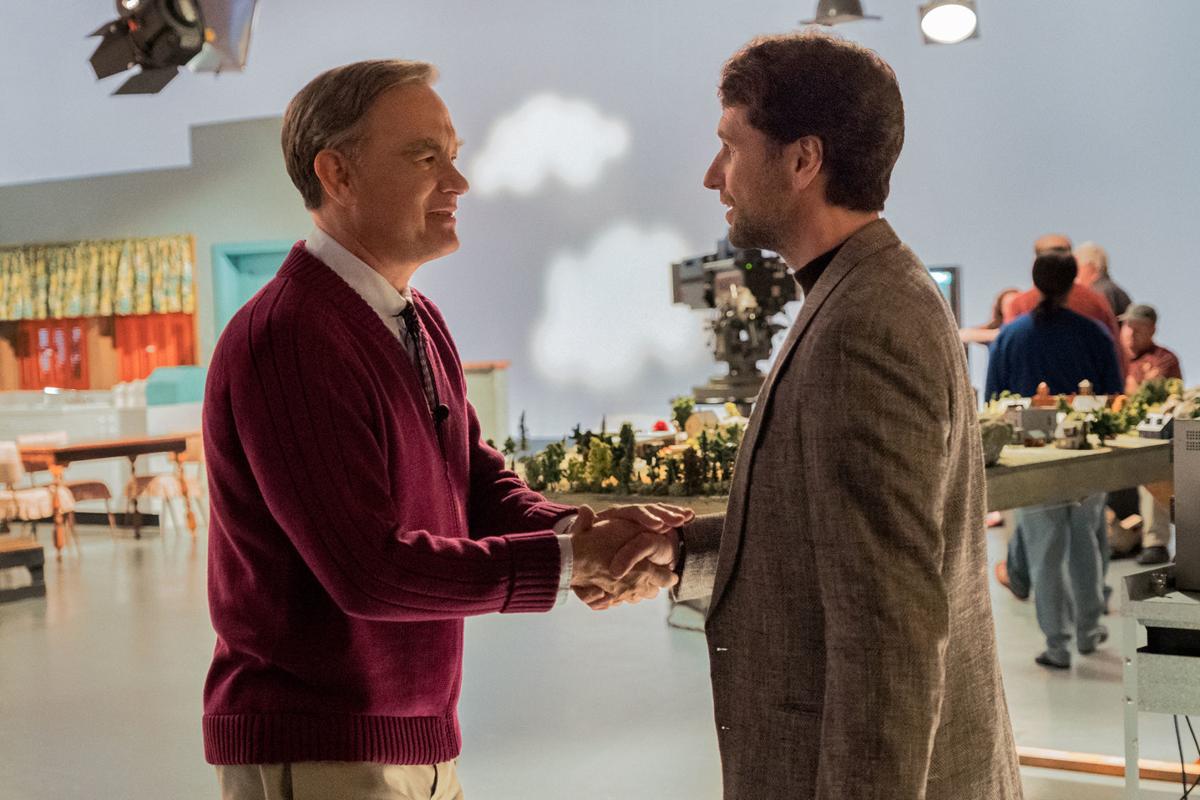 “A Beautiful Day in the Neighborhood” tells the story of the real-life life friendship between children’s TV host Fred Rogers , played by Tom Hanks (left), and a journalist played by Matthew Rhys.

“A Beautiful Day in the Neighborhood” tells the story of the real-life life friendship between children’s TV host Fred Rogers , played by Tom Hanks (left), and a journalist played by Matthew Rhys.

Who doesn’t love Mr. Rogers? That’s both the rationale and the challenge for any filmmaker attempting to make a movie about the beloved icon of children’s television.

Where is the narrative tension in a character so universally cherished? How can you make a Mister Rogers movie that isn’t a mere nostalgia trip or heaping dollop of cloying sentiment? Perhaps most daunting: Why even try when there’s a documentary — last year’s “Won’t You Be My Neighbor?” — that told the story of Fred Rogers so splendidly?

“A Beautiful Day in the Neighborhood” answers all those questions with style and smarts, proving that, with the right cast, script and astute direction, even the most familiar story can feel new — and, given the tenor of these times, urgently needed.

From the miniature village and gentle tinkling music that greeted young viewers of “Mister Rogers’ Neighborhood” back in the 1960s, “A Beautiful Day in the Neighborhood” gets to the point with forthrightness and simplicity that Rogers himself would have admired: Here’s Tom Hanks, tossing his loafers, smiling at the camera in that cozy low-tech Pittsburgh set, inviting us into a world where his persona has ineffably fused with Fred Rogers. “Hello, neighbor.” Just like that, we’re in.

And we’re laughing. Because what looks like a Mister Rogers show is actually a meta-show-within-a-show, in which we’re introduced to Lloyd Vogel (Matthew Rhys), a magazine writer who actually may be the one person on the planet who doesn’t love Mister Rogers.

Based on the real-life journalist Tom Junod, who wrote a profile of Fred Rogers for Esquire in 1998, Lloyd may be more dysfunctional (and violent) than the real-life guy, but his psychological defenses are basically the same: Assigned to write a brief encomium to an American hero (“400 words. Be nice,” says his editor), Lloyd travels to Pittsburgh with elbows out and eyebrows skeptically raised.

The ensuing interview turns into something more: an enduring friendship and spiritual awakening that ambushes Lloyd and continually subverts his most cynical efforts to dismiss it. Faced with Fred Rogers’ directness and honesty — too often confused with naivete — Lloyd puts up a flummoxed, fruitless fight. Each time they encounter one another he turns into the angry, rejected child that crouches inside him, and walks away confounded, skeptical and a little bit changed.

Of course, Lloyd is the proxy for the audience in “A Beautiful Day in the Neighborhood,” which happily accepts the odd eye roll, even as it leans in to Rogers’ own sincerity and moral clarity.

Artfully dodging over-sweetness and sanctimony, screenwriters Micah Fitzerman-Blue and Noah Harpster frequently give us permission to laugh, usually in the form of Lloyd’s dumbstruck disbelief at Rogers’ most saintly qualities. Brilliantly directed by Marielle Heller, “A Beautiful Day in the Neighborhood” is enlivened by a witty and clever production design that uses the TV show’s toy-box aesthetic as a transition device and within the narrative itself, allowing viewers to enter Rogers’ world and, sometimes, to gently parody the hokiest aspects of the show.

Hanks’ performance is entirely of a piece with those insightful, imaginative flourishes. If most viewers consider it a no-brainer that Hollywood’s nicest actor — for whom honesty, wholesomeness and kindness is a personal brand — would play Rogers, they’d be mistaken to think his performance is technically easy. Rather than imitate his character’s soft, singsong cadences, Hanks simply slows down his own genial and measured voice. His Fred Rogers is thoughtful, open and emotionally attuned. The “can you say?” caricature is almost instantly banished by the Presbyterian pastor whose power lies in focusing on the person in front of him and simply listening, with compassion and genuine care.

As his relationship with his subject deepens, Lloyd is disarmed enough to come to terms with his own fears as a new parent, as well as with his own estranged father, played by Chris Cooper (the plot line involving Cooper’s character will culminate in a scene that is perfectly orchestrated for both laughs and a few tears). Balancing pathos, humor and Rogers’ practice of radical Christian love and acceptance, Heller lends “A Beautiful Day in the Neighborhood” a light touch and depth of feeling that play off each other in near-perfect balance.

The film’s finest scene — reminiscent of a similar moment in “Won’t You Be My Neighbor?” — is the work of a filmmaker of superb judgment and confidence, who knows exactly what her movie is about: not a cuddly figure from baby boomers’ collective past or the “emotional arc” of a flawed protagonist, but those moments of grace — vagrant, unearned, numinous and liberating — that can turn everyday life into a miracle.

In an era that seems fatally mired in fear, anger and mistrust, “A Beautiful Day in the Neighborhood” arrives as something more than a movie. It feels like an answered prayer.

"A Beautiful Day in the Neighborhood"

Rating: PG (for some strong thematic material, a brief fight, and some mild language)