Cone Health said Monday it will not sign a contract for the State Health Plan's new reimbursement program, meaning Cone's facilities and doctors could be out-of-network for state employees starting Jan. 1, 2020.

Folwell launched in October his attempt to move the SHP to a government pricing model tied to Medicare reimbursement rates, which typically are lower than hospitals currently receive for services.

The treasurer has the authority to decide on reimbursement cuts. Folwell's revised deadline for signing up expired at midnight Monday.

Cone said in a statement that a projected $26 million in lower SHP reimbursement would "reduce, and in some cases eliminate, services we provide daily. Thereby, risking our ability to invest in the future."

"Cone Health has no choice but to decline joining the (project)," the system said.

Wake Forest Baptist Medical Center said Monday it will not comment on its contract stance.

Novant Health Inc.'s latest comment included that “it is our understanding that State Health Plan members will have an opportunity to verify provider’s network status after July 1, and before their open enrollment (for 2020) begins on Sept. 29.”

The treasurer's office confirmed Monday there have been three hospitals — N.C. Specialty Hospital in Durham, Martin General Hospital in Williamston and Randolph Health in Asheboro — to sign the contract, which is administered by Blue Cross Blue Shield of N.C.

Folwell said Randolph's decision to sign the contract was done in part to provide a more dependable revenue stream for a hospital that is pursuing an acquirer. Randolph negotiated with Cone for 15 months before talks ended in June 2018.

Among the state's healthcare systems, UNC Health Care appears to be the most active with its opposition to the contract.

That includes submitting Friday a counter-proposal to the contract to Gov. Roy Cooper and Republican legislative leaders. 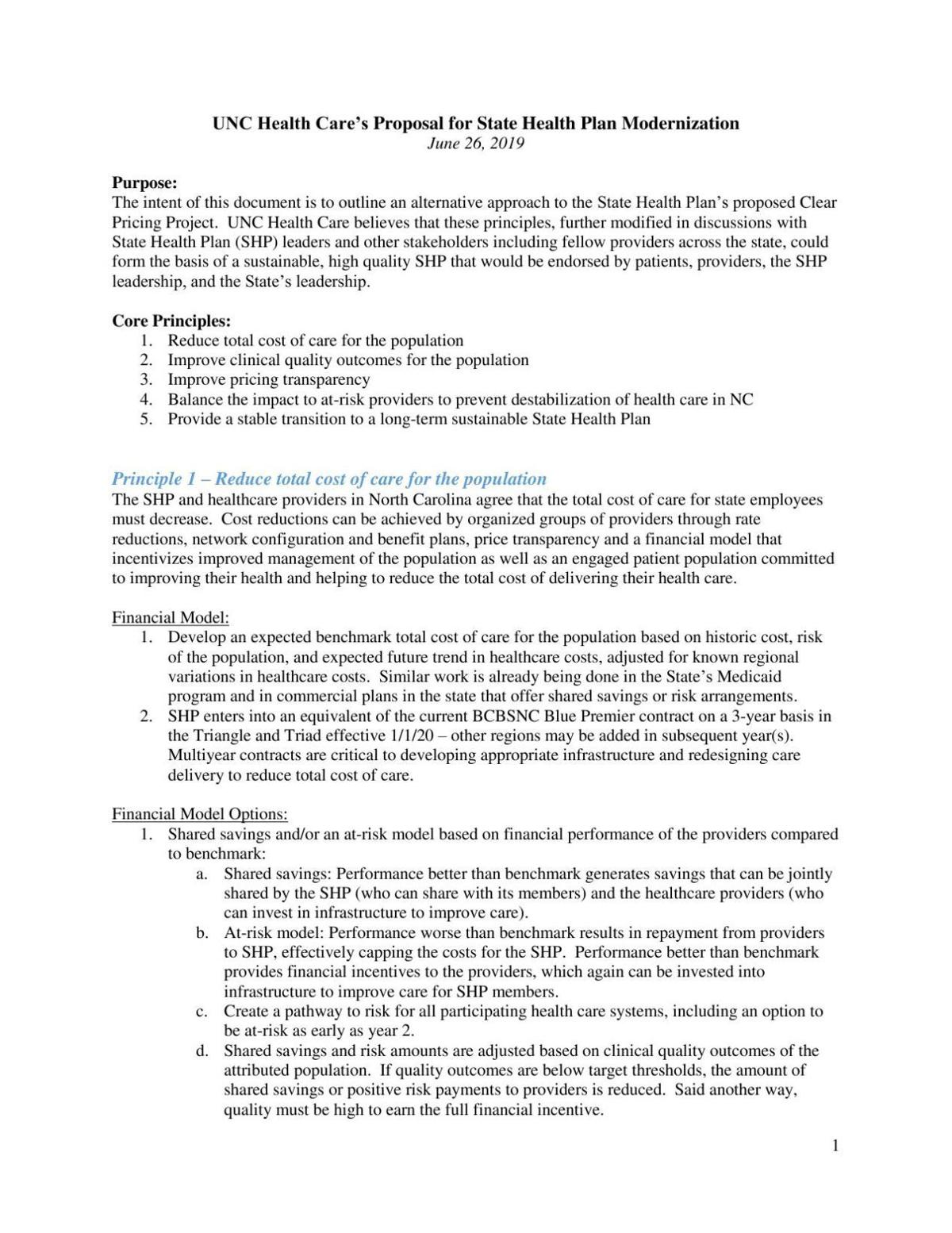 Dr. Wesley Burks, chief executive of UNC Health Care and dean of its medical school, told the SHP leadership Thursday that the system "is not in a position" to sign the current contract.

"While we crafted our plan independently, we believe it achieves many of the principles Treasurer Folwell outlines," Burks said. "We do not speak for other hospitals and providers in the community; however, as actively working in other segments, we believe these ideas will be broadly welcomed."

"Over the next few weeks, we are optimistic we will be able to discuss these alternatives in detail with the leadership of the SHP," UNC Health Care said.

"We are confident we will be able to reach agreement in ample time to avoid any impact upon the provision of, or access to, care for state employees, retirees, and their dependents."

Folwell called the counterproposal "a silly back-to-the-future strategy that was presented to the previous treasurer and State Health Plan administration over three years ago and was rejected because of its lack of transparency and no concrete, measurable savings to the plan."

Senate leader Phil Berger, R-Rockingham, said Monday that "I am glad to see that UNC is coming to the table to work together with the State Health Plan and Treasurer Folwell on a solution that works for everybody."

House Bill 184, which would halt Folwell’s initiative for at least a year in favor of a legislative study report, cleared the state House by a 75-36 vote April 3.

It has yet to be acted upon in the Senate since being sent to the Rules and Operations committee April 4. Berger signaled last week he has no desire to address HB184.

“The office believes the state should halt the treasurer’s plan until hospitals across the state can collaborate and provide input to assure patients will get the care they need.”

Folwell said in response to the governor office that Cooper “has always been aligned with the billionaire nonprofits, and against those who teach, protect, and serve.”

“As treasurer, he has shown me zero interest in the financial solvency of North Carolina. The insolvency of the State Health Plan ranks right behind Illinois at $32 billion.

“We didn’t do it, we discovered it — and now, we have the responsibility to fix it,” Folwell said.

Berger said Monday, "it is vital that the long term viability of the State Health Plan is secured and that our state employees continue to have access to high quality health care at a reasonable cost.”

Berger said that hospitals and providers "will only be out of contract if they fail to come to an agreement with the State Health Plan and the treasurer."

"Although the deadline is today, the State Health Plan has reimbursement contracts with providers that run until the end of 2019, so I am still hopeful they can come to a solution that does not result in state employees seeing a reduction in available providers."

Their decision-making process begins in early fall when they chose which providers they want for 2020 coverage.

"State employees have earned health coverage," Cone said. "However, it is an incomplete benefit if it doesn’t include their local hospital."

When asked about in-network options for SHP participants to go to Cone providers, the system said it "encourages them to take advantage of other insurance options during the fall benefits enrollment period."

"We are urging state employees to look at their spouse or partner’s plan come open enrollment."

The SHP plans to phase the rate changes in over a two-year period. First-year rates are projected to produce $196 million in savings, and year-two rates to bring an additional $62 million.

The SHP is the largest buyer of medical and pharmaceutical services in North Carolina, spending $3.2 billion in 2017.

Folwell’s proposal would allow the SHP to begin paying about 61,000 providers based on a percentage above current Medicare rates, along with an additional and adjustable profit margin estimated at 82%.

Folwell said the SHP will provide increased reimbursement payments to most independent primary-care physicians, behavioral-health specialists and many rural hospitals.

Cone claimed it would have $26 million in potential lost reimbursement.

Medicare and Medicaid represented 48% of Cone's reimbursement and source of payments in fiscal 2018, while commercial and managed care was 46.3% and self-pay was 1.5%.

Cone said that "if we accept this contract, other payers may push for similar terms."

If the typical contract negotiations between private health insurers and hospitals are any indication, the out-of-network status could linger for weeks or months before an agreement is reached.

Contract disputes between private health insurers and hospitals have often gotten heated, including filing lawsuits, as part of negotiating strategies.

“It looks increasingly as if (the hospitals and providers) will need to sign on to his plan or challenge it in court — if they believe they can make a case,” said Mitch Kokai, senior policy analyst with Libertarian think tank John Locke Foundation.

Cone cited sentiments similar to the N.C. Healthcare Association in saying that Folwell "has turned a deaf ear on our repeated pleas to work collaboratively to switch state employees to a plan where clear and sustained cost savings are achieved, not simply a reduction in prices."

"We urge state employees to voice their objection to the Clear Pricing Project’s lack of hospital coverage by contacting their lawmakers," Cone said.

In recent months, there were local radio advertisements placed by the Cary-based nonprofit Partners for Innovation in Health Care, associated with the NCHA, that urges consumers to voice their opposition to Folwell's plan to legislators. The ads calls the plan a “risky scheme” several times in the spot.

Folwell claimed UNC Health Care helped pay for the campaign by Partners for Innovation in Healthcare.

UNC Health Care said that "in paying its NCHA dues, UNC Hospitals inadvertently paid an assessment that was included on the invoice. This was an administrative oversight and has been rectified."

"NCHA confirms it did not use UNC Hospitals funds for its 501(c)(4) organization and has since refunded that money."

According to a WRAL report last week, the State Health Plan currently has about 15,000 contracts in place.

The Clear Pricing Project plan has at least 640 signed contracts, representing at least 15,000 providers. The contract has been available since May 13.

On Thursday, ECU Physicians signed the contract. It is the medical practice of Brody School of Medicine at East Carolina University.

On June 24, EmergeOrtho and OrthoCarolina signed the contracts.

Hospital leaders and the state treasurer spent months battling over the health plan for thousands of state workers.

Monday's COVID-19 numbers: No new deaths reported in the Triad as record-high number of patients hospitalized across N.C.