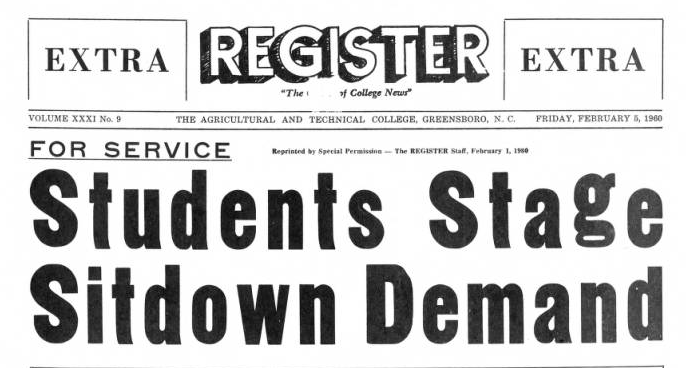 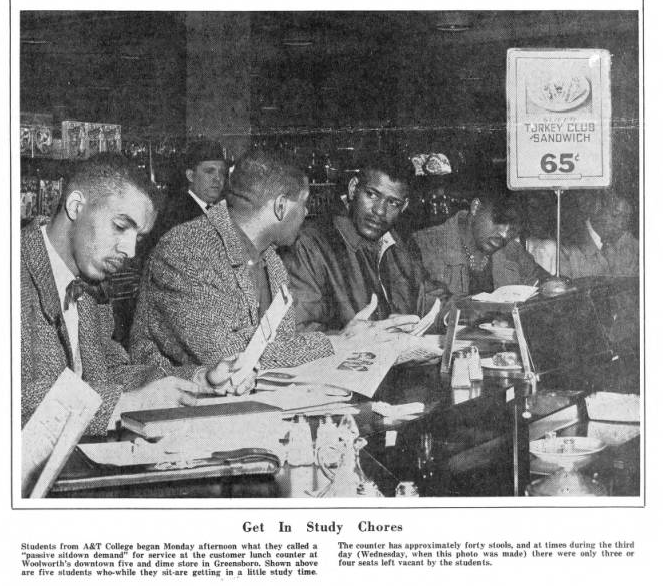 This photograph of the Woolworth sit-ins in Greensboro appeared on the front page of the Feb. 5, 1960, edition of The A&T Register, the student newspaper at N.C. A&T. 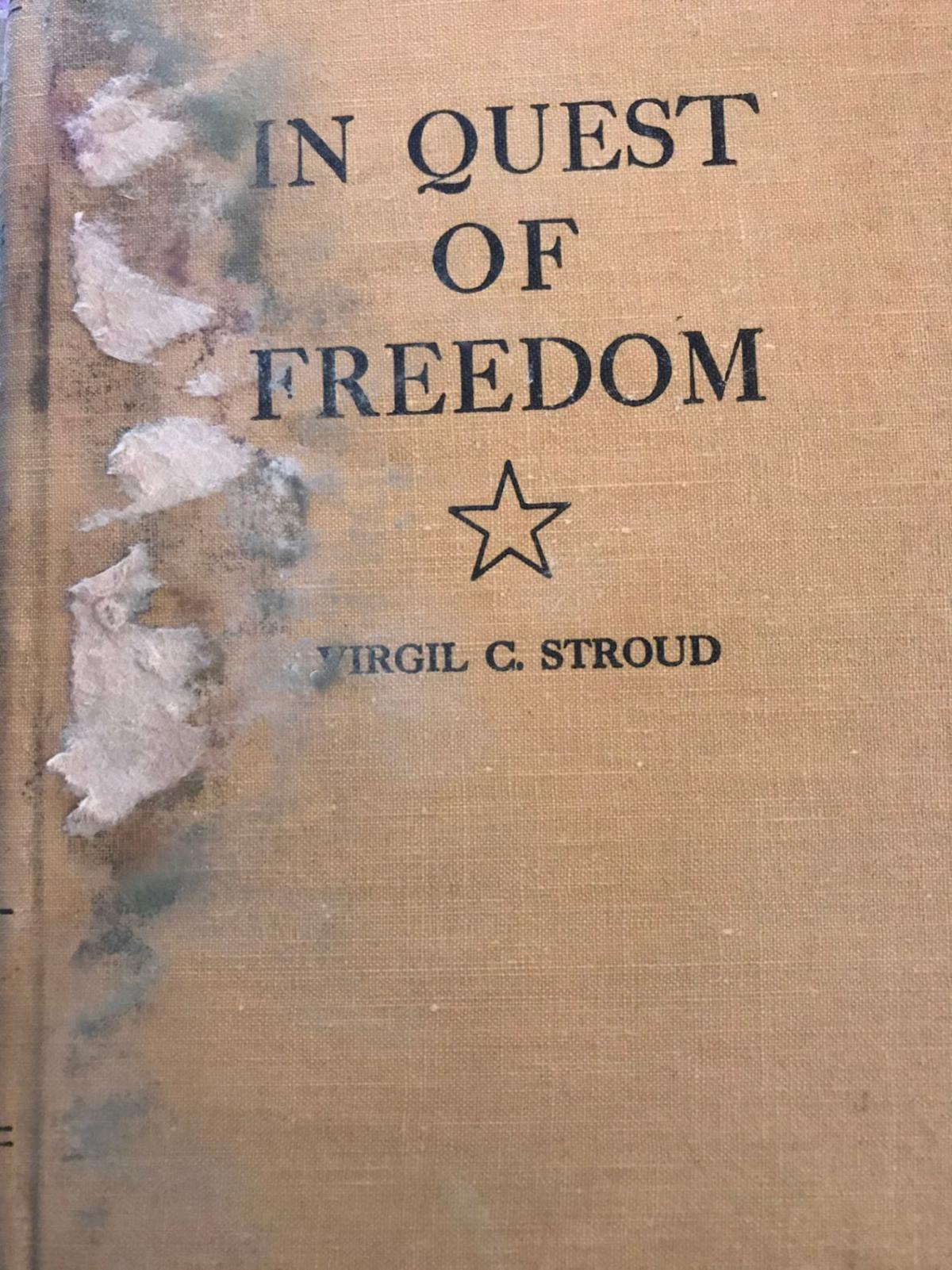 One annual ritual on the local higher ed beat is covering the sit-ins breakfast at N.C. A&T. The 2020 commemoration was Friday (because Feb. 1 fell on a Saturday this year), and it stuck to the usual script: breakfast, a high-profile speaker, the presentation of the Human Rights Medal and the wreath-laying at the February One Monument in front of the Dudley Building.

I skipped the wreath-laying this year. (N&R photographer Woody Marshall didn't; his photo gallery includes some great shots from that portion of the program as well as Roland Martin's talk that preceded it.) Part of me didn't want to walk across campus on a cold, gray day. The other part of me was distracted by a display set up just outside the ballroom where Friday's program took place. I'm a sucker for old newspapers.

The display — newspaper clippings, photos and other media mementos of the sit-ins — had been put together by the folks at Bluford Library's University Archives. My detour also gave me the chance to meet James Stewart, A&T's archives and special collections librarian I interviewed in August when I wrote about A&T instructor and war hero Lt. Robert Campbell. (Stewart and I communicated last summer by phone and email; this was our first face-to-face meeting.)

On the table was a sign with a plea, and that's where y'all come in. A&T is looking for any copies you have of The A&T Register, the student newspaper, from February and March 1960.

A&T does have a digital copy of the Feb. 5, 1960, edition of The A&T Register. At the top of this blog post is the front-page headline of that paper; click here to read the entire four-page issue, which has nine stories and editorials and three photos from the first few days of the Greensboro sit-ins. But the university archives is missing the Feb. 12, 1960, issue of The A&T Register. Stewart's pretty sure the newspaper published at least once in March 1960, but A&T doesn't have a copy of that paper, either.

Stewart's evidence that the papers exist: They're cited in a book called "In Quest of Freedom,"* written by A&T government professor (and A&T alum) Virgil Stroud. The 1963 book — one of the first written histories of the sit-in movement — also contains pictures originally published in the student newspaper.

With copies of those old newspapers, Stewart told me, "we would have a better sense of what students were thinking and saying during that time period."

If anyone squirreled away copies of the A&T Register from February and March 1960, James Stewart would love for you to check your attics and garages and anyplace else you keep old items. If you strike newspaper gold, reach him at 336-285-4176, Ext. 54188, or jrstewa1@ncat.edu.

P.S.: The gap in the library's collection of student newspapers ends with the April 1, 1960 issue. There's a front-page photo of the four A&T freshmen, dressed in jackets and ties and looking every bit like the teenagers they are. Otherwise, the sit-ins seem to have faded from the front page — the lead story is an April Fool's gag about the cafeteria serving T-bone steaks — but there's an editorial and several letters about the sit-ins on page 2.

Curiously, though, the sit-ins aren't called "sit-ins." Instead, the paper used the term "sit-down." In the Feb. 5 edition I mentioned above, the newspaper referred to the event as a "passive sitdown demand," which apparently is a quote from the protesters. I'd love to know when the term "sit-in" took root.

* Update, Feb. 10: I incorrectly listed the title of Virgil Stroud's book in the original blog post. The book is "In Quest of Freedom." If you want to check the book out for yourself, Bluford Library has three copies of "In Quest of Freedom" in its archives, according to this catalog listing. UNCG, Bennett College, Greensboro College, UNC-Chapel Hill and Duke University are among the libraries that also have a copy.

Update, Feb. 11: The person who alerted me to my error above was Crystal McCombs, Stroud's daughter. She said that her father's papers were a logical place to search for copies of The A&T Register from early 1960, but a lot of those documents were destroyed in a 2007 house fire. McCombs said a copy of "In Quest of Freedom" survived the fire. She sent me a photo of the damaged book, which I added to the end of the blog post.

"The damage to the book was from the water used to extinguish the fire," McCombs wrote in an email. "The clean-up crew was about to toss the book as trash and my mother rescued it just in time."

McCombs also sent me a brief biography of her dad she took from the book jacket. I mentioned in the original blog post that Stroud was an A&T alum and professor. According to the book-jacket bio, Stroud graduated in 1937 from A&T, where he was editor-in-chief of The Register. After graduation, he taught public school, fought in Europe during World War II and returned to A&T in 1946 to teach history and government. He left Greensboro briefly for New York University, where he earned his master's and doctoral degrees, then returned to A&T in 1954. Stroud was a government professor and chairman of the social sciences department when "In Quest of Freedom" was published.

I found his obituary (not online) that says Stroud later organized the political science department at A&T and was the department's first chairman. He retired from the university in 1980 and died in 1986. For sure that's a life well-lived.

Support my coverage of higher education. Click here to learn about digital subscriptions to www.greensboro.com.

N.C A&T held the 60th Sit-In Anniversary Breakfast Celebration at its Greensboro campus on Jan. 31, 2020. The event commemorates the first…

Guilford College English professor — and founder of the Every Campus A Refuge program — is the new director of UNCG's Center for New North Carolinians.

N.C. A&T alum to lead a university in Boston

Lynn Perry Wooten earned her accounting degree from A&T in 1988. Since 2017, she has been dean of the applied economics and management school at Cornell University in New York.

The Syllabus: A new education data dashboard for North Carolina

MyFutureNC rolls out a way to check its progress toward its 2030 education goals for the state.

The Syllabus: An early voting primer for local college students

The Syllabus: At UNC-Charlotte, an era of remarkable growth

The Charlotte university has added more than 5 million square feet of new and renovated space during the tenure of retiring Chancellor Philip Dubois.

Meet the chief: Next public meeting with new Greensboro police chief is Thursday

Ed Hardin: A long journey to Daytona ends in near tragedy for a sport little understood