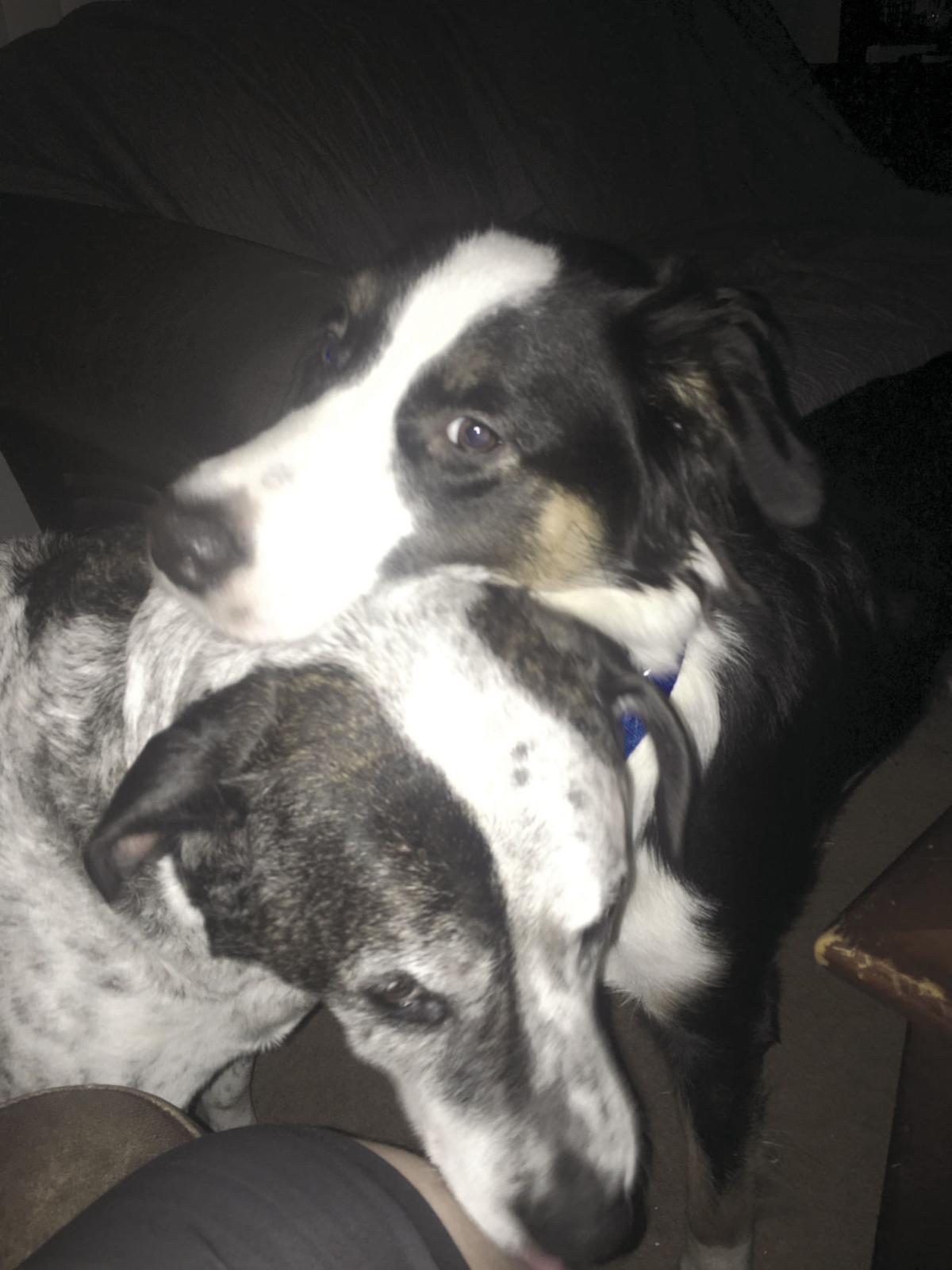 Sophie (top) tries to get a game of tag going with Gonzo. 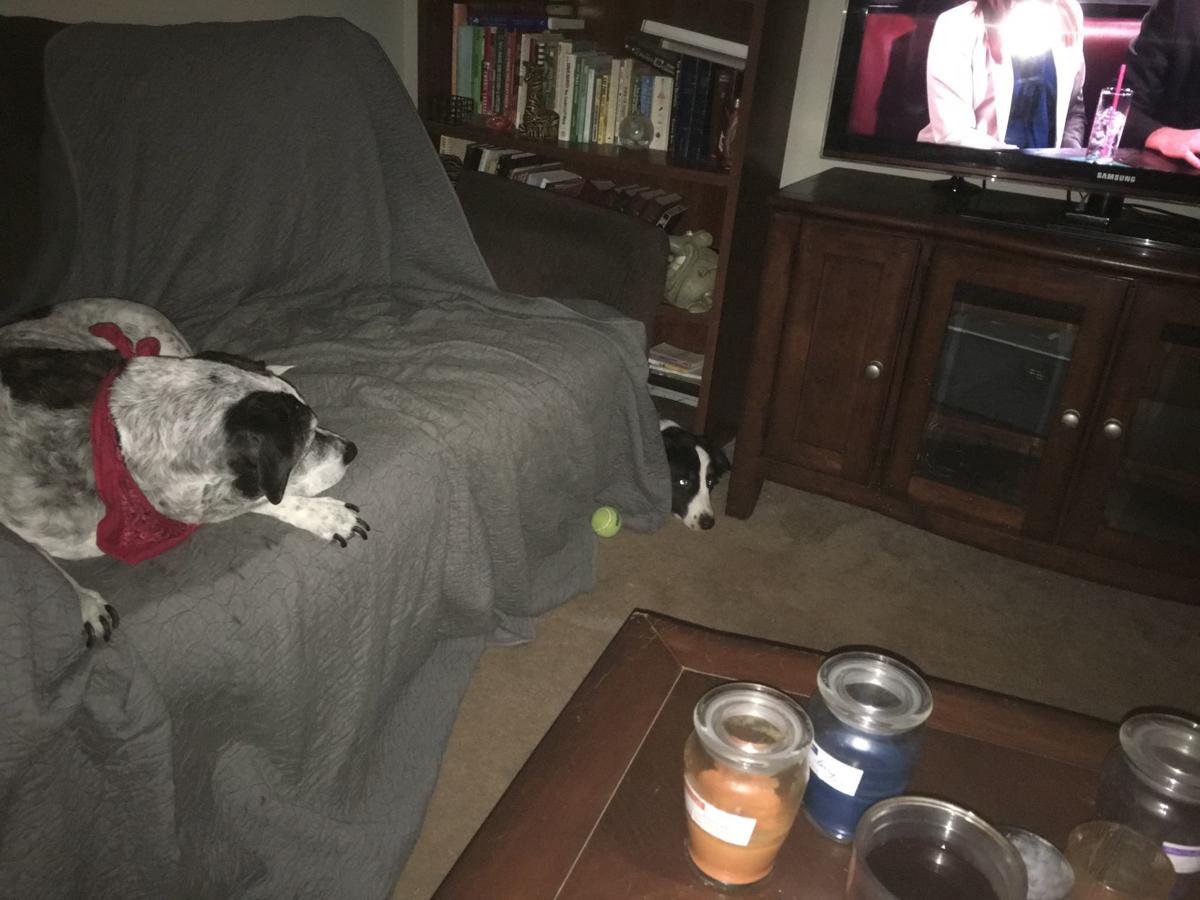 Gonzo (left) keeps his eye on Sophie as she sneaks around the side of the love seat to steal back her beloved tennis ball.

Sophie (top) tries to get a game of tag going with Gonzo.

Gonzo (left) keeps his eye on Sophie as she sneaks around the side of the love seat to steal back her beloved tennis ball.

From the time Sophie came home with us, she was enamored with Gonzo.

She watched him eat. She followed him from room to room. She would lay down when he did, not too close but close enough.

She watched his every move.

But most of all, she wanted to play. He didn’t.

Fast forward a year, and things haven’t changed too much ... except when it comes to the two dogs playing.

Gonzo is 14-plus years Sophie’s senior, so he’s not exactly spry. He’s more like the slightly curmudgeon uncle with a bad hip who’ll do his best to entertain some youngsters until he grows weary of it.

He barks at her to go away, and that’s her cue to start the teasing and what looks like a two-dog game of tag. She runs circles around him, sometimes using the furniture like a Wall of Death motorcycle rider in the circus. Most of the time, she lets him catch her. Other times, he just trails behind her barking, kind of like a grandmother who shouts “you kids better settle down” when things get too loud. (I’ve always called him babushka for a reason.)

Even when Sophie pushes his patience, you can tell Gonzo is at least a little more lively after the ruckus. It’s almost like he gets a kick out of her energy, and she’s got plenty of that to share.

In the year and a half since Gonzo’s stepsister Lucy passed, he’s gotten visibly older. His aches ache a little more, and his limp is a little more pronounced. It takes him a little longer to get up, and he’s quicker to lay down and take a breather. Loss and age will do that.

Sophie has become his therapy dog of sorts. She’s given him a little more spring in his step.

Her most recent attempts to tease Gonzo into action involve throwing things at him. We’ll play a few rounds of fetch, but at some point she takes the ball over to Gonzo and throws it at him. It’s a sweet gesture, I guess, but it usually doesn’t get the desired response.

He just gives her that “go away” look and goes back to sleep. Sometimes, she turns that into a one-dog game, leaving the ball in front of Gonzo and then trying to sneak around and steal it back. Most of the time she gets impatient and just gives him a high-pitched “give me my ball back” bark. That’s when his inner curmudgeon comes out. If he wore a belt, he would be fumbling with the buckle yelling “You kids better not let me catch you!”

But you know there’s a little smirk behind the warning. After all, a little play time does an old body good.

Get information, stories and more at The Pet Shop blog at www.greensboro.com/blogs. Send events to people@greensboro.com.

Cat Adoption Events: 1-4 p.m. second and fourth Saturdays, Sheets Pet Clinic, 809 Chimney Rock Court, Greensboro. All cats are spayed/neutered, tested, current on vaccinations, treated for fleas and worms, microchipped. $100 for one cat, $150 for two adopted together to the same home. Every cat or kitten adopted from Sheets Pet Clinic receives half-price vaccinations for the rest of its life, if brought in for yearly wellness exams. Every cat receives one-month free pet insurance. petadoptions@sheetspetclinic.com or www.sheetspetclinic.com.

Man dies after being pinned under a truck in Winston-Salem, police say

Josh Howard, a former Wake Forest and NBA star, remembers how competitive Kobe Bryant was on the court

Duke's Mike Krzyzewski on the death of Kobe Bryant

Greensboro is literally the BEST Pet Care community anywhere, I read it everyday, and i'm also so grateful I found http://bit.ly/RechargeableDogCollar, it helped me to teach my dog basic obedience commands and solve an uncontrollable dog's behaviour problems, hope it helps some others!