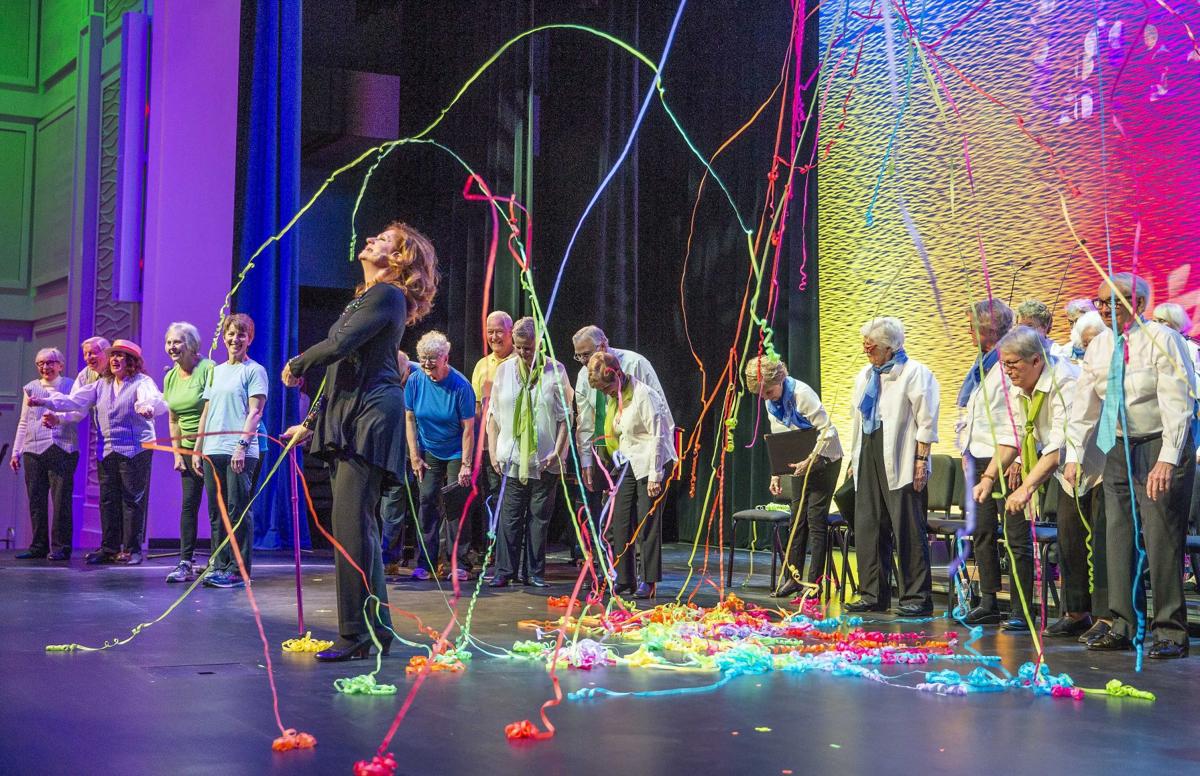 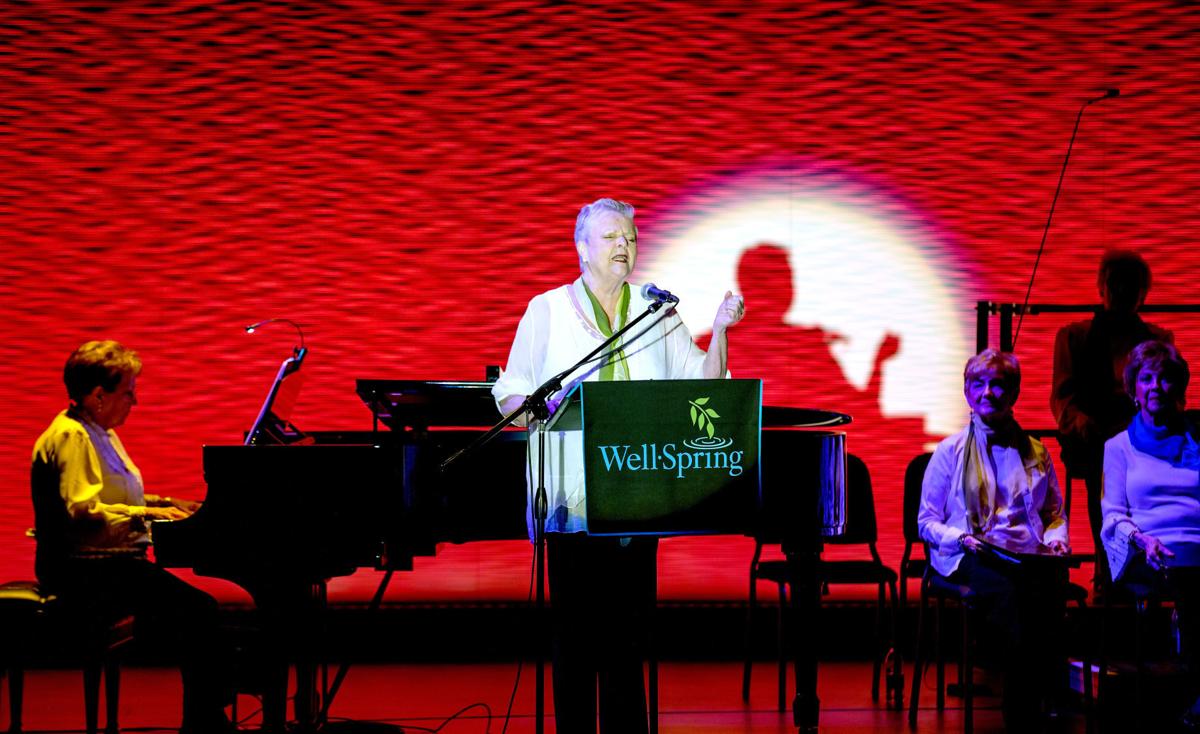 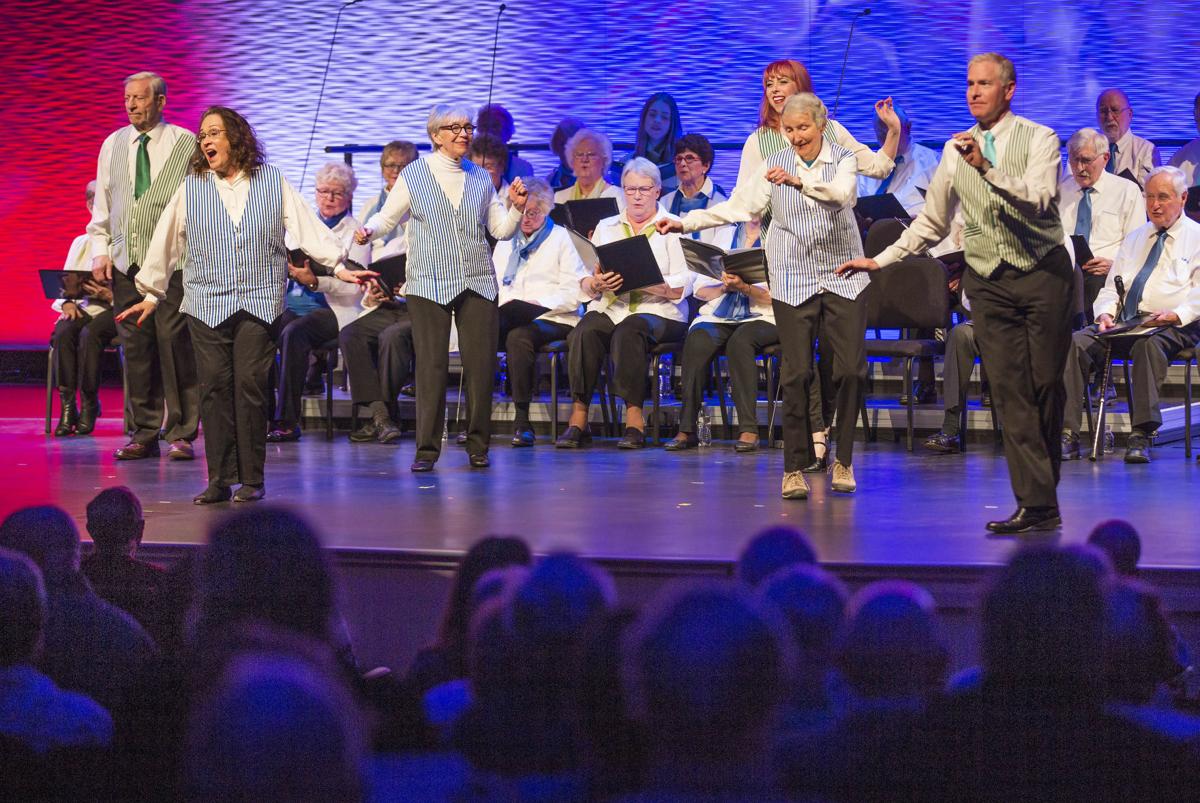 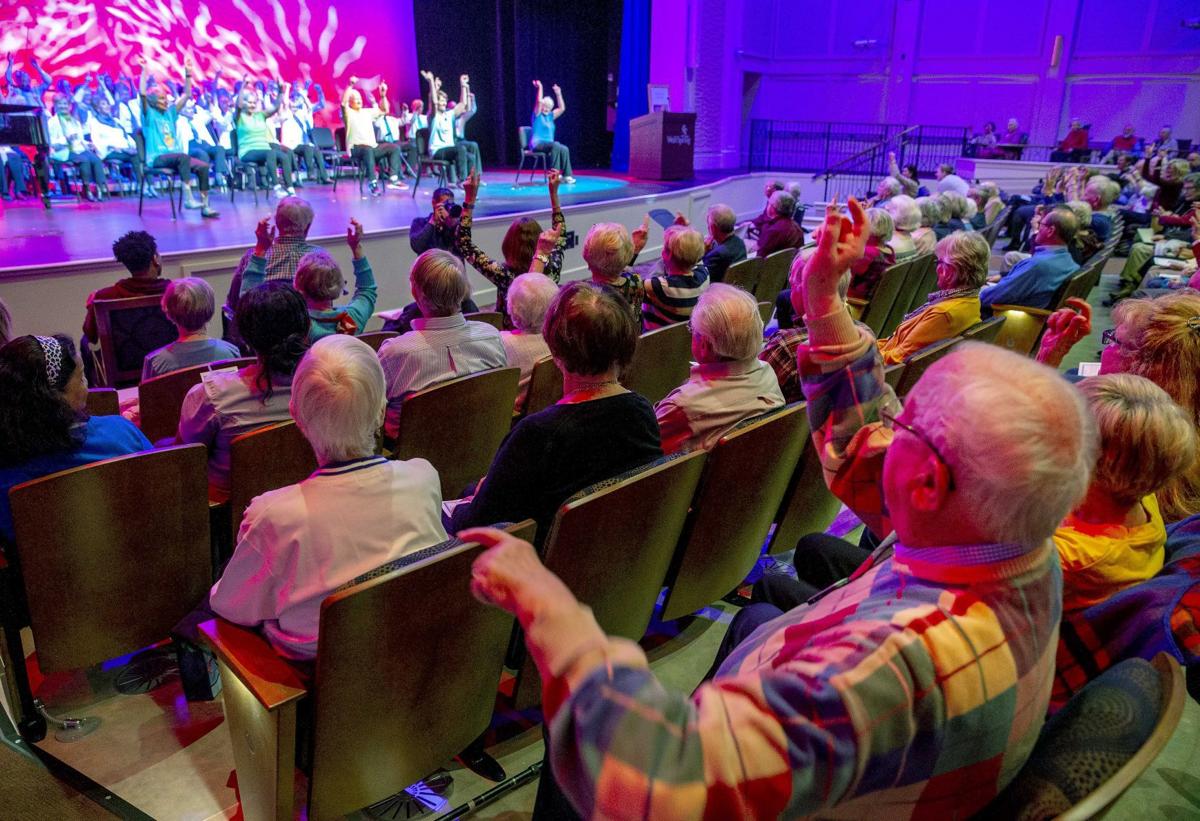 Paul Long gets into the fitness routine performed Thursday at Well-Spring retirement community’s new 340-seat theater. The theater is part of a $30 million expansion and renovation at the retirement community, located in northwestern Greensboro, where 420 seniors live. 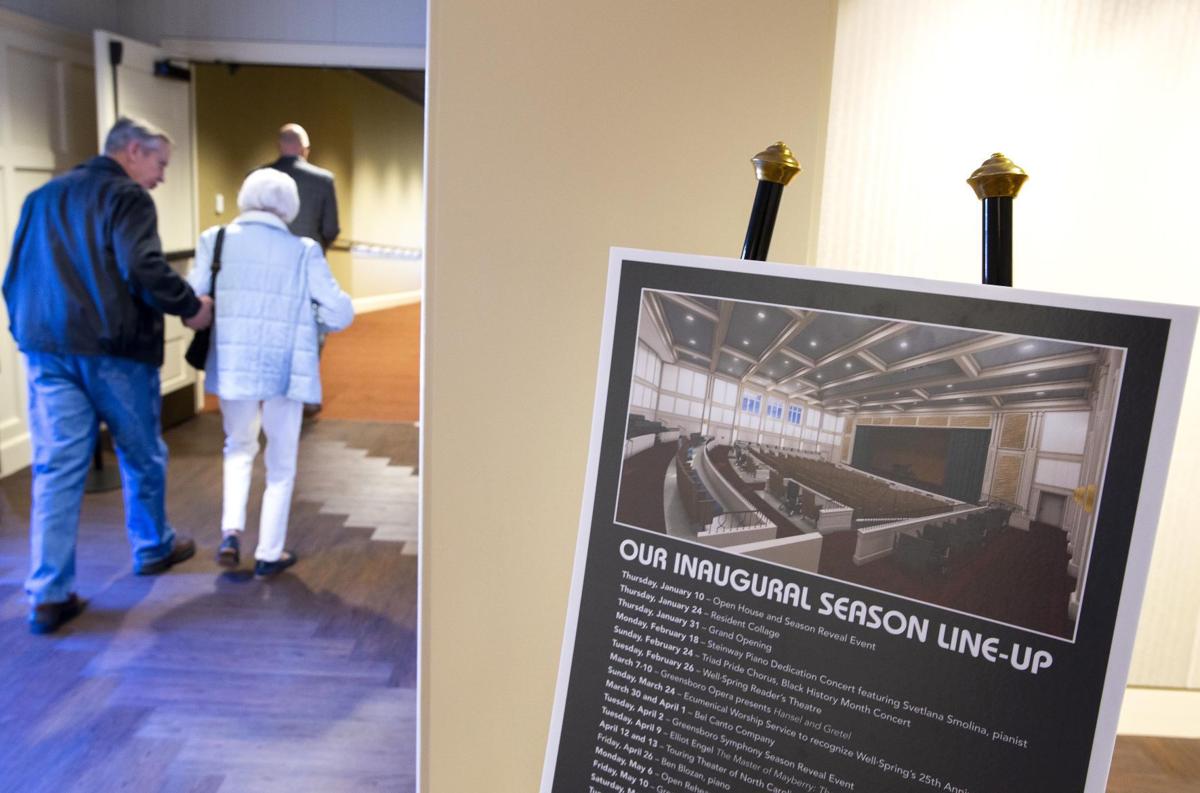 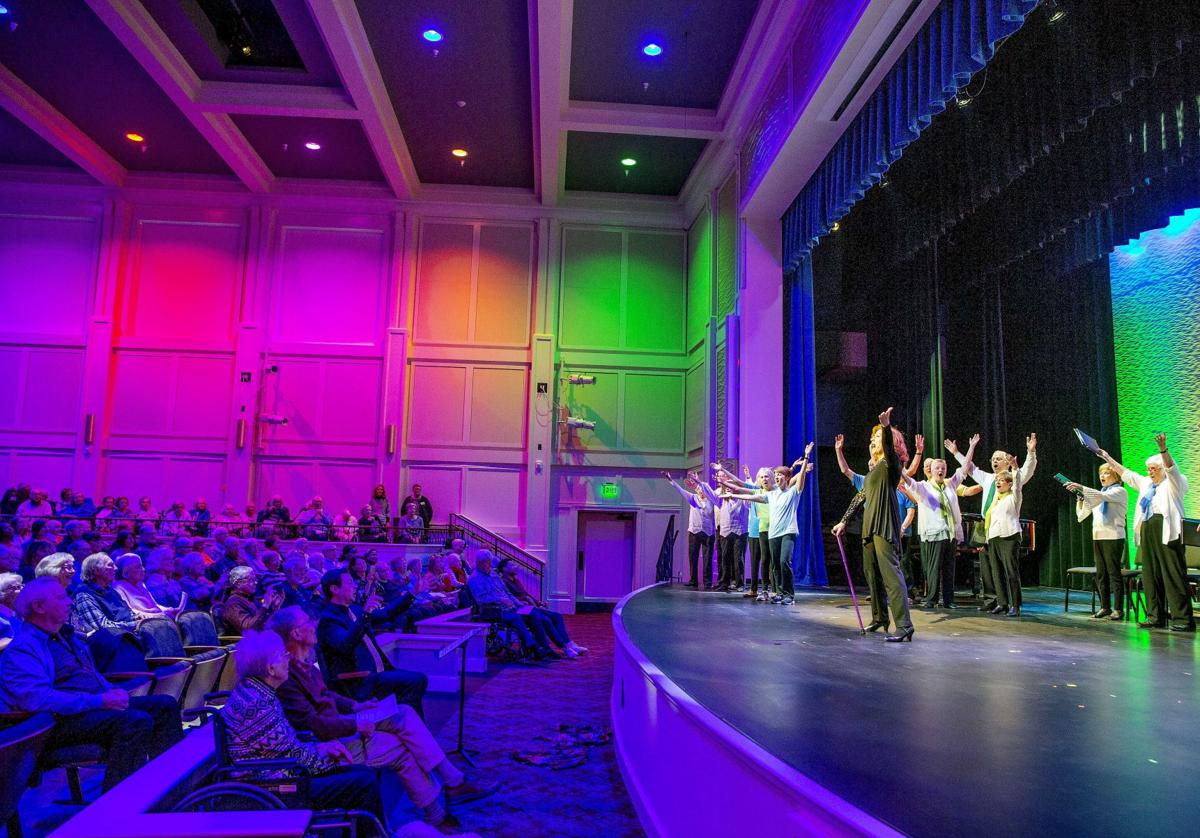 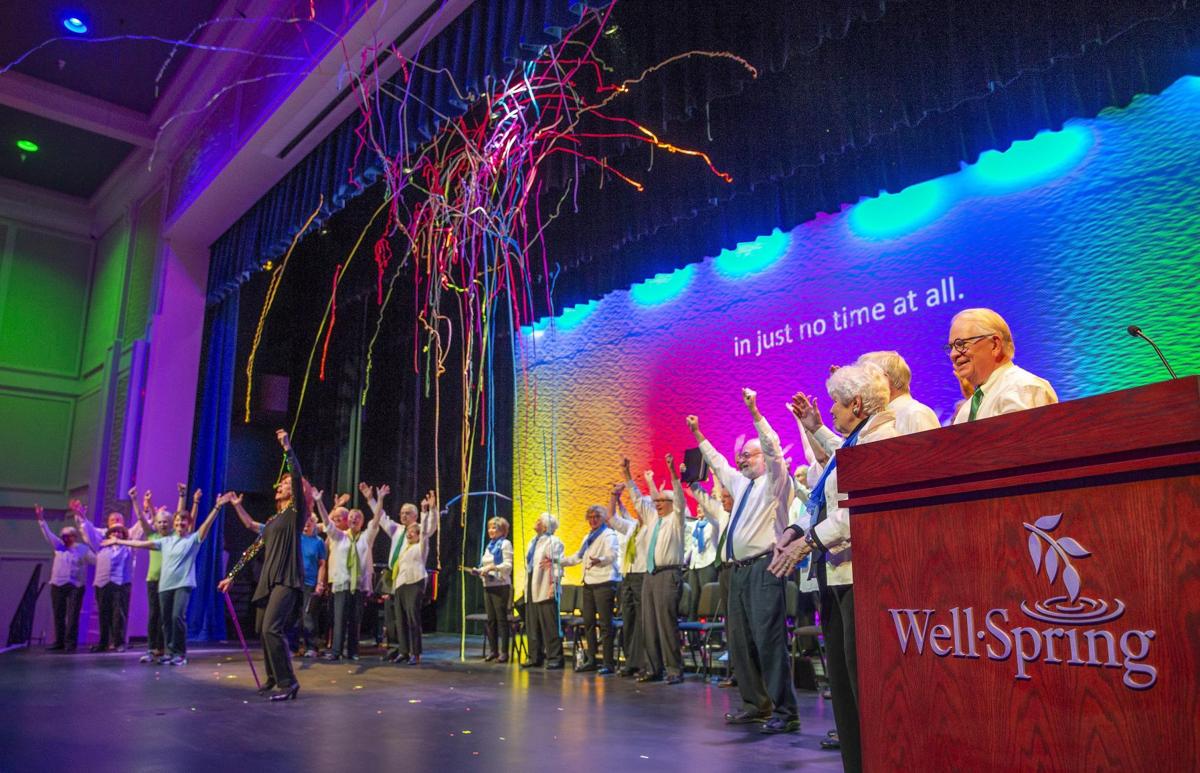 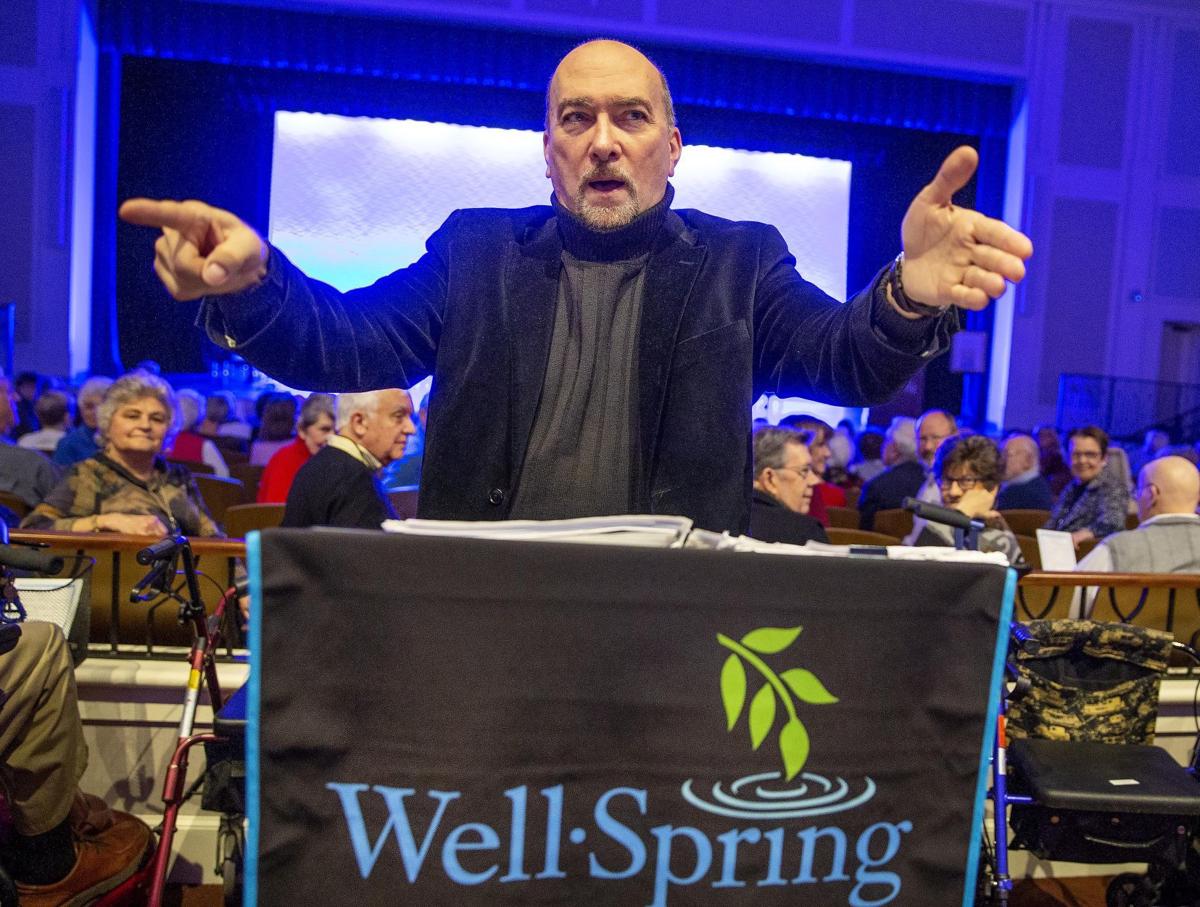  Woody Faulkner leads the Well-Spring Ringers during a Resident Collage performance. The theater is part of the new Resident Activity Center. 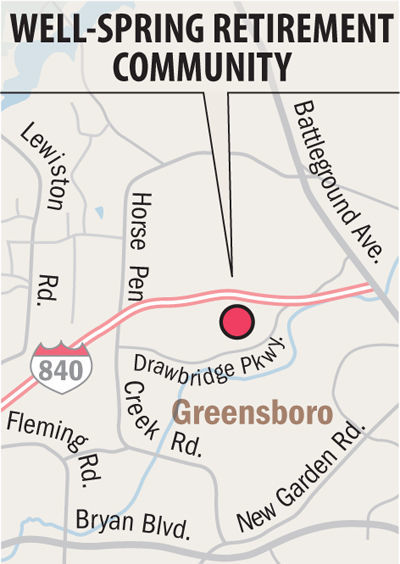 Paul Long gets into the fitness routine performed Thursday at Well-Spring retirement community’s new 340-seat theater. The theater is part of a $30 million expansion and renovation at the retirement community, located in northwestern Greensboro, where 420 seniors live.

 Woody Faulkner leads the Well-Spring Ringers during a Resident Collage performance. The theater is part of the new Resident Activity Center.

GREENSBORO — Ralph Davison sang “If Ever I Would Leave You” from the musical “Camelot.” Marilyn Burris sang “It Might As Well Be Spring” from the film “State Fair.”

More than 70 Well-Spring residents became the first to perform Thursday in the theater in their new Resident Activity Center.

The 340-seat theater is part of a $30 million expansion and renovation at the retirement community where 420 seniors live in the city’s northwest.

Aside from the theater, the project adds amenities including an art gallery, two art studios, a woodworking and hobby shop, a rehearsal room, and more dining and gathering spaces.

The Resident Activity Center will open officially on Thursday, Jan. 31.

In coming months, the theater will host a Greensboro Symphony chamber concert, the Greensboro Opera, the Bel Canto Company, the Touring Theatre of North Carolina and the Eastern Music Festival.

O. Henry plays will move there from the Greensboro History Museum.

Many events will be open to the public.

“It will create and expand community in every sense of the word,” said K. Alan Tutterow, Well-Spring’s executive director and chief operating officer. It will build community within the Well-Spring campus, Tutterow said, and “allow us to reach out into the broader community and bring them together and bring them to the campus.”

The project marks the 25th anniversary of the complex off Drawbridge Parkway, between Battleground Avenue and Horse Pen Creek Road. It’s operated by the not-for-profit Well-Spring Group.

Seven years ago, Well-Spring began to plan for the next generation of residents, said Lynn Wooten, the vice president of marketing and public relations.

“Communities such as ours each try to identify their own niche,” Wooten said. “We decided that arts, culture and education could be our niche with the right facilities.”

Well-Spring already maintained partnerships with nonprofit arts organizations such as the Greensboro Symphony, sponsoring some concerts. Well-Spring keeps its nonprofit status by giving money to the community, Wooten said.

The new project added 53,000 square feet of space and renovated 34,700 square feet of existing space. The project’s first phase — a bistro, special occasions room and lounge — opened in September. The Bauman Bistro comes in part from a gift by the late Ed Bauman, a retired chief executive officer of jeans-maker Blue Bell Inc., and his wife, Vivien.

The main kitchen has been gutted and rebuilt. The original dining room is being renovated. Both will reopen in February.

For arts groups and the public, the theater adds a new venue to the city’s performing arts spaces, many of them downtown.

Those include the 311-seat Van Dyke Performance Space and the 88-seat Stephen D. Hyers Theatre in the Greensboro Cultural Center, and the 100-seat, third-floor performance space atop the Carolina Theatre, The Crown.

Others include the Carolina Theatre’s 1,129-seat main auditorium and the Cone Denim Entertainment Center, a privately-owned venue with a capacity of 850 people, and spaces in the Greensboro Coliseum Complex.

“The addition of the theater adds to the creative and cultural fabric of our community,” said Zizi Barhouma, the marketing and media relations director for ArtsGreensboro. “And we’re looking forward to more opportunities for arts organizations to collaborate in the new space and potentially bring the arts to a new audience.”

Off the theater lobby, the Resident Activity Center includes an art gallery for rotating exhibitions from UNC-Greensboro’s Weatherspoon Art Museum.

The Jo Safrit & Cathy Ennis Gallery will open Feb. 12 with an exhibition of the works of Weatherspoon founder Gregory D. Ivy. A gift from Safrit, a Well-Spring resident and Weatherspoon supporter, made it possible.

“It’s the quality of art that we would like to have for our residents,” Wooten said. “And it gives the Weatherspoon great exposure in a different location.”

Heating and air-conditioning equipment is housed beneath the concrete floor.

On stage stands a new Steinway Model B piano, a gift from the family of Larry Hart, a longtime dean of UNCG’s School of Music.

The room can accommodate not only performances but lectures and memorial services.

“The team very carefully thought out how to bring all of the right elements together so that we could have a broad range of programming and make sure that we have the right lighting, the right acoustics,” Wooten said.

“We can’t wait to hear what our patrons think of the theater,” said Lisa Crawford, the Greensboro Symphony’s president and chief executive officer, “and the additional space outside the auditorium where they can socialize and meet the artists following the concerts.”.

On Thursday, Well-Spring residents Ralph Davison and Clem Clement were among the residents who joined the collage performance.

They praised the new theater.

“It is simply exceeds any expectation that I had,” said Davison, a retired headmaster of Greensboro Day School. He and his wife, Jean, will attend performances there.

So will Clement and her husband, D. Hayes Clement.

“It connects the heart of Greensboro with the Well-Spring campus,” said Clem Clement, the president of the residents association. “This will bring new opportunities for Greensboro and Well-Spring that we don’t even know yet.”

Trends in senior living, from pools to woodworking studios

Some events require tickets from the sponsoring organization. Call 336-545-5400 for more information.

*Subject to change. Additional programming expected to be scheduled.

Opening Sept. 13, "5 by O. Henry" will now be called “An O. Henry Celebration: Stories & Songs” and produced on the stage of the new theater at Well-Spring retirement community in Greensboro.

Out with the old, in with the new voting machines