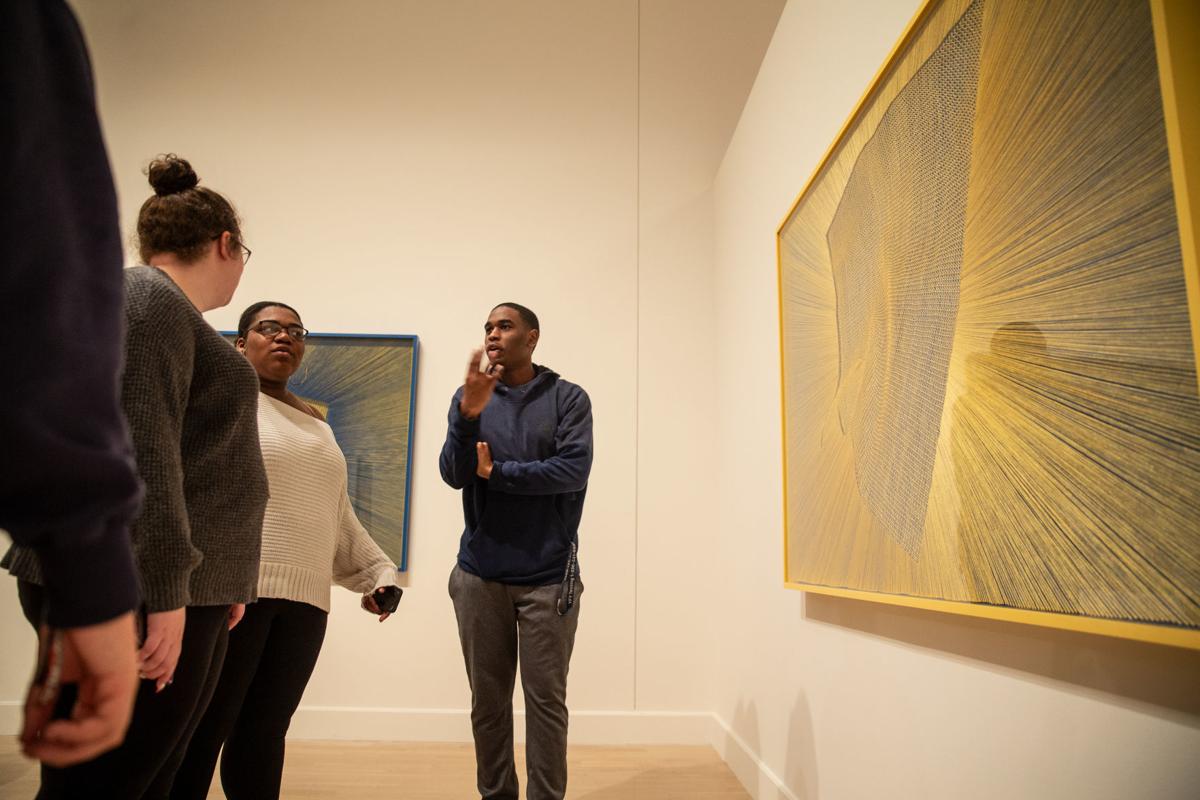 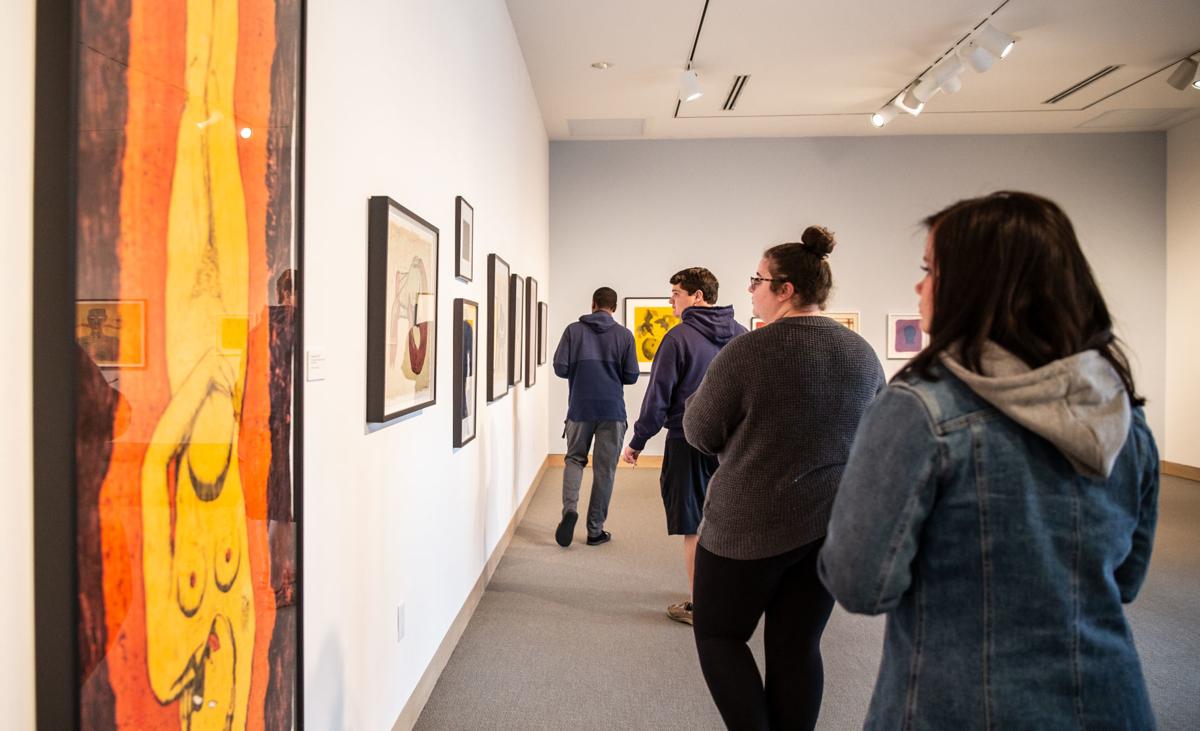 Guests look at artwork by Alison Saar during a tour Nov. 26, 2019, of the Weatherspoon Art Museum on the campus of UNCG. Some of the museum’s earliest art pieces were created by women, a likely reflection of the university’s earlier existence as Woman’s College. 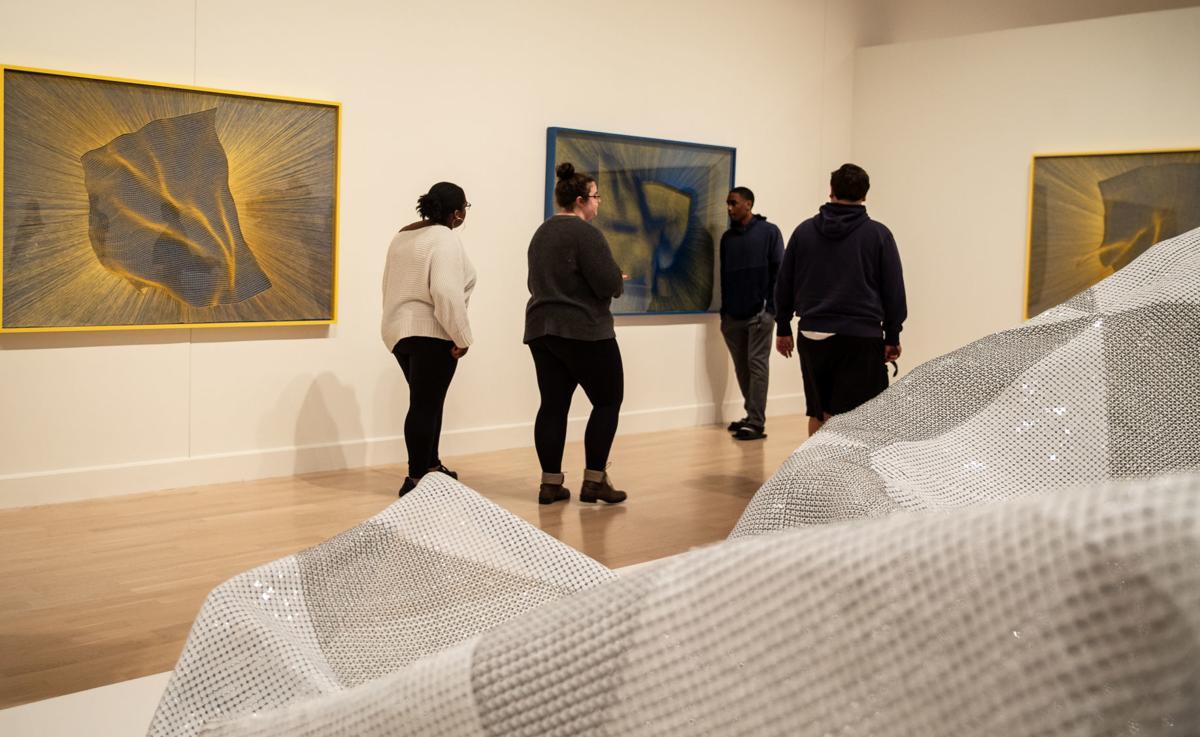 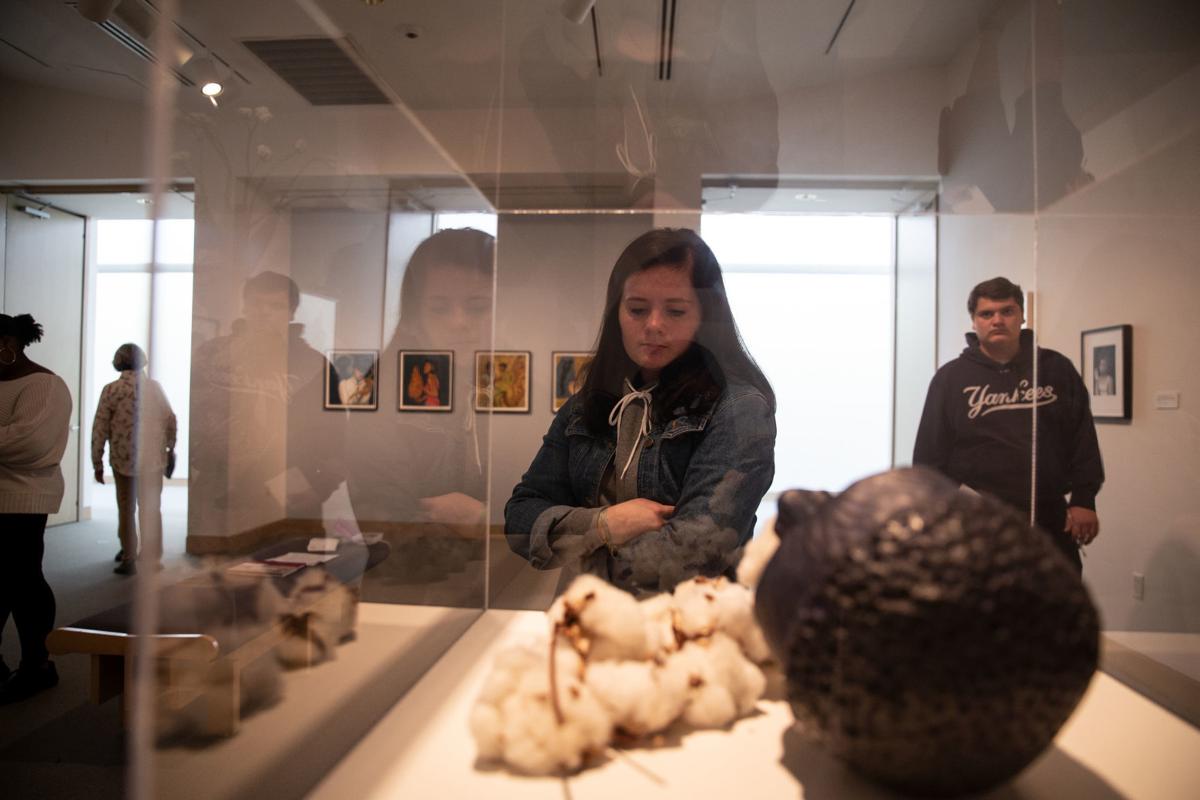 Hailey Paivanas looks at a piece of art by Alison Saar during a tour Nov. 26. 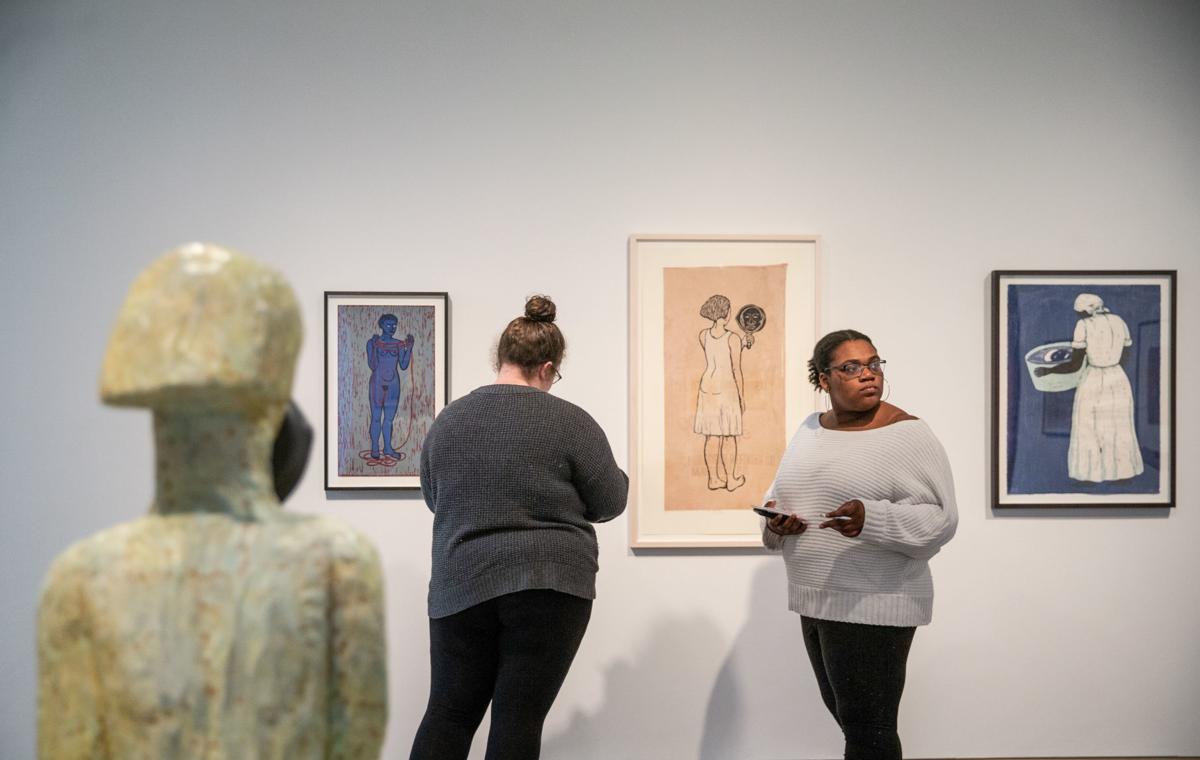 Kylie Legare (left) and Empress Williams looks at art by Alison Saar during a tour Nov. 26, 2019, of the Weatherspoon Art Museum in Greensboro. 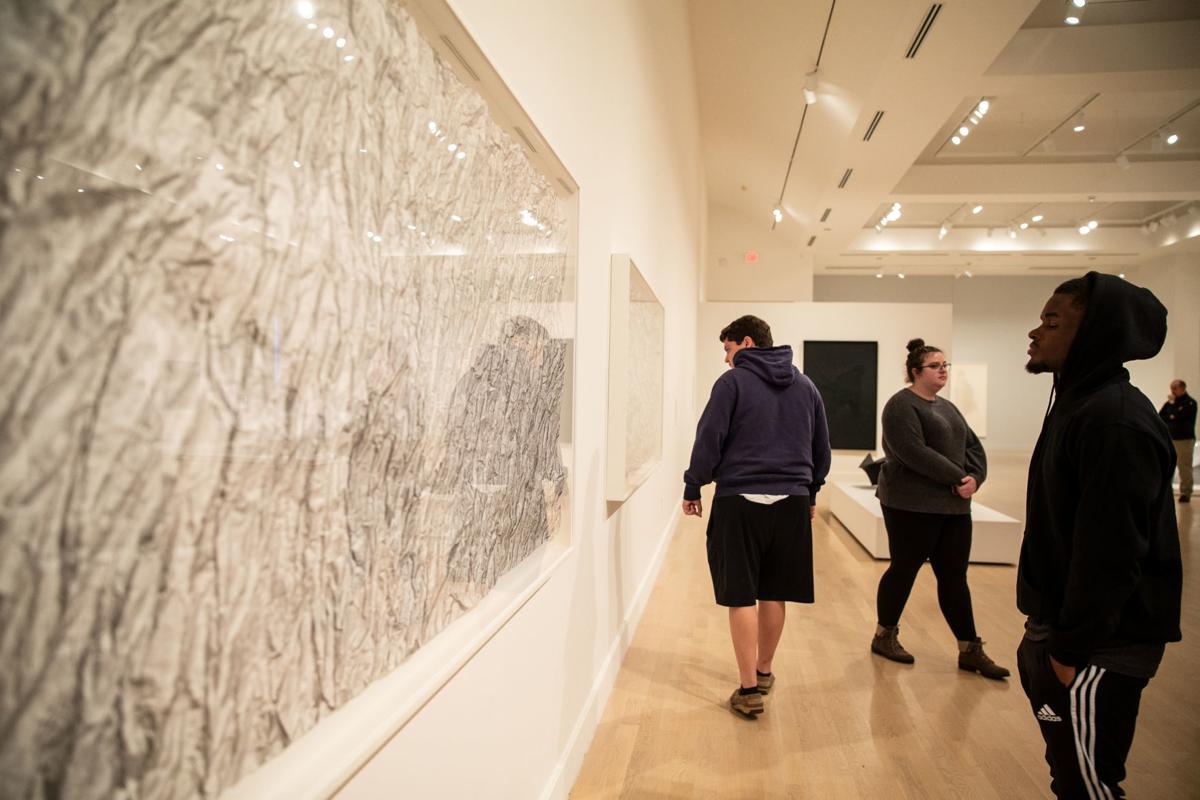 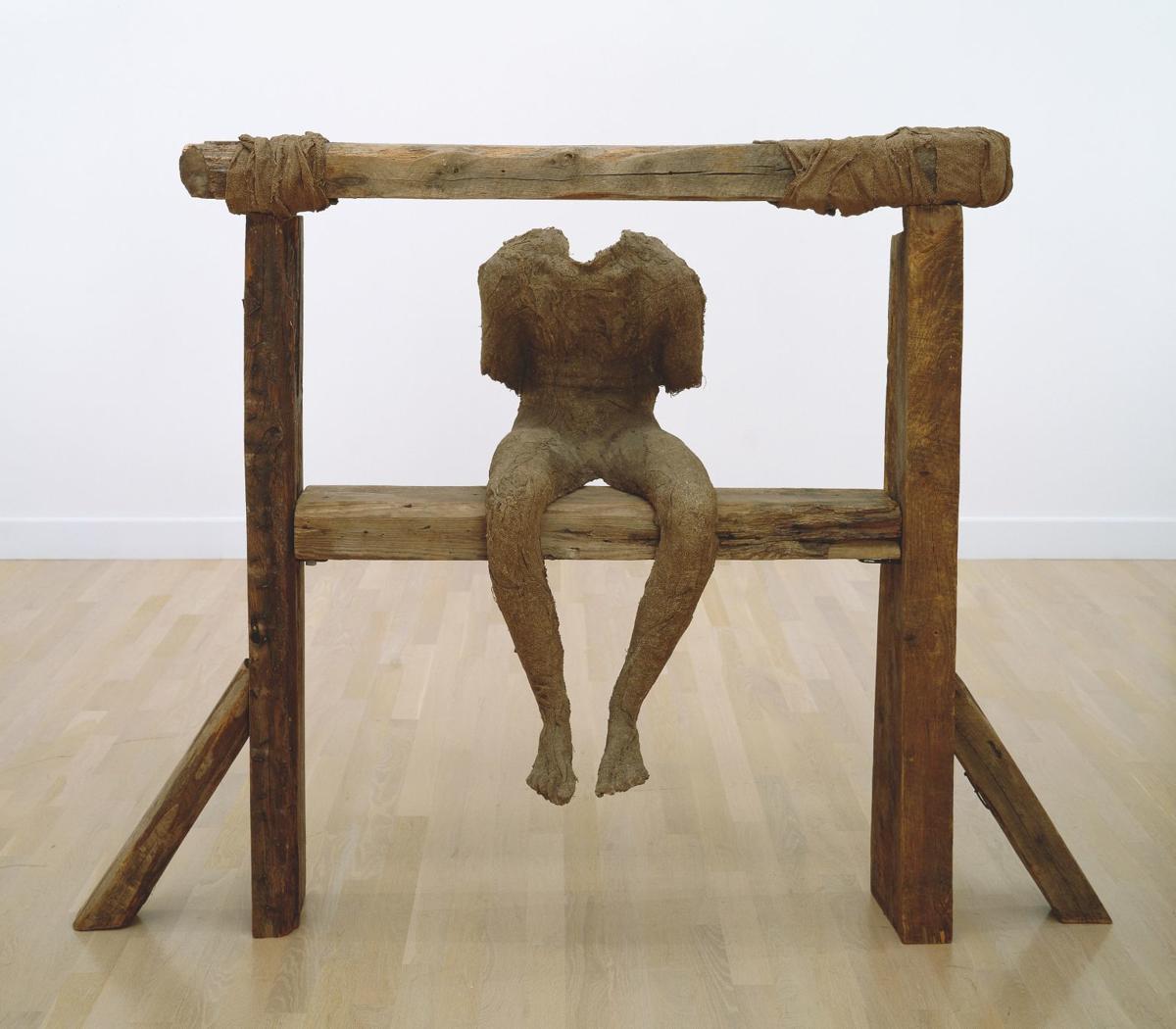 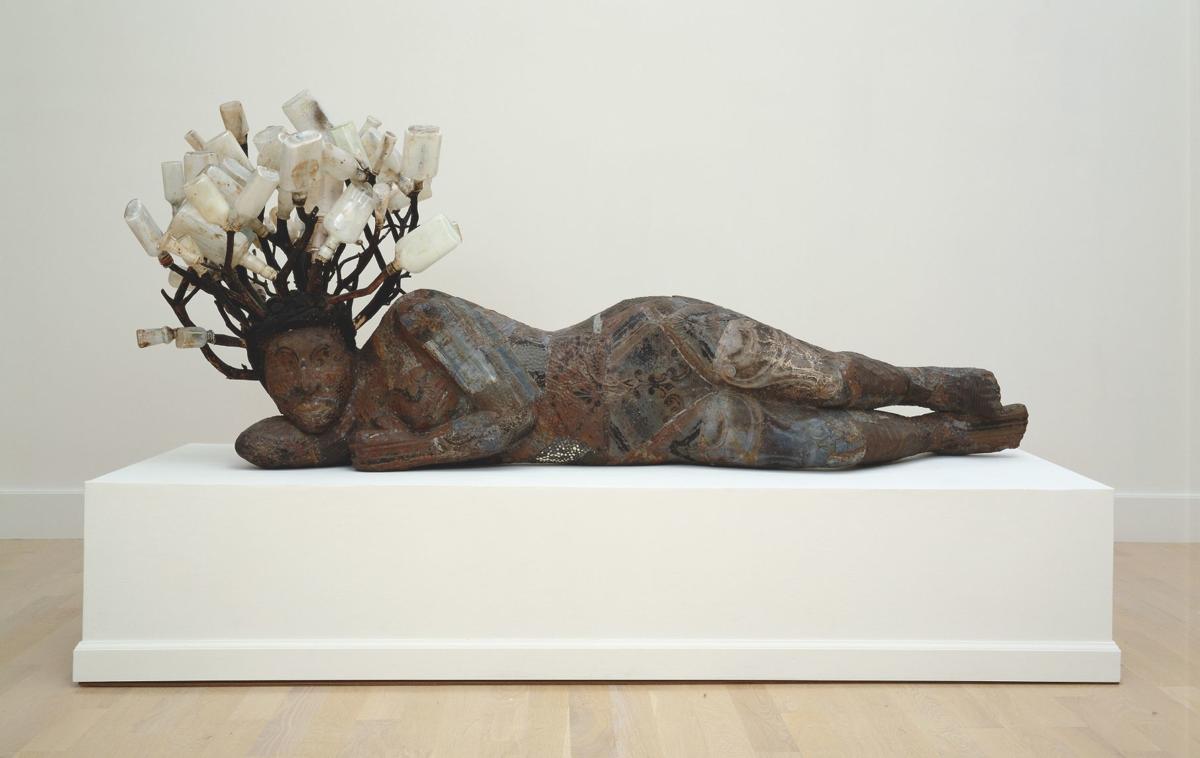 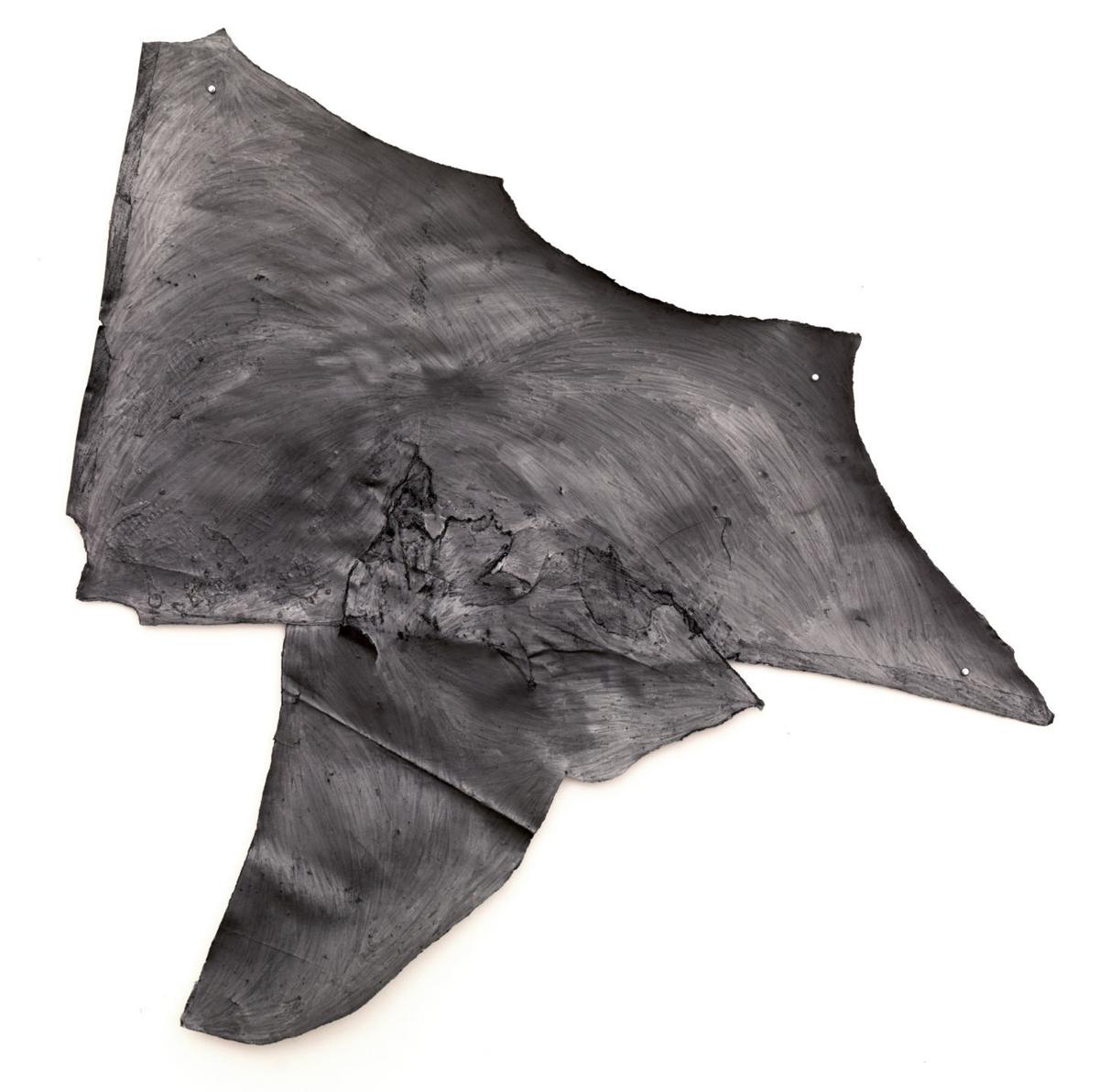 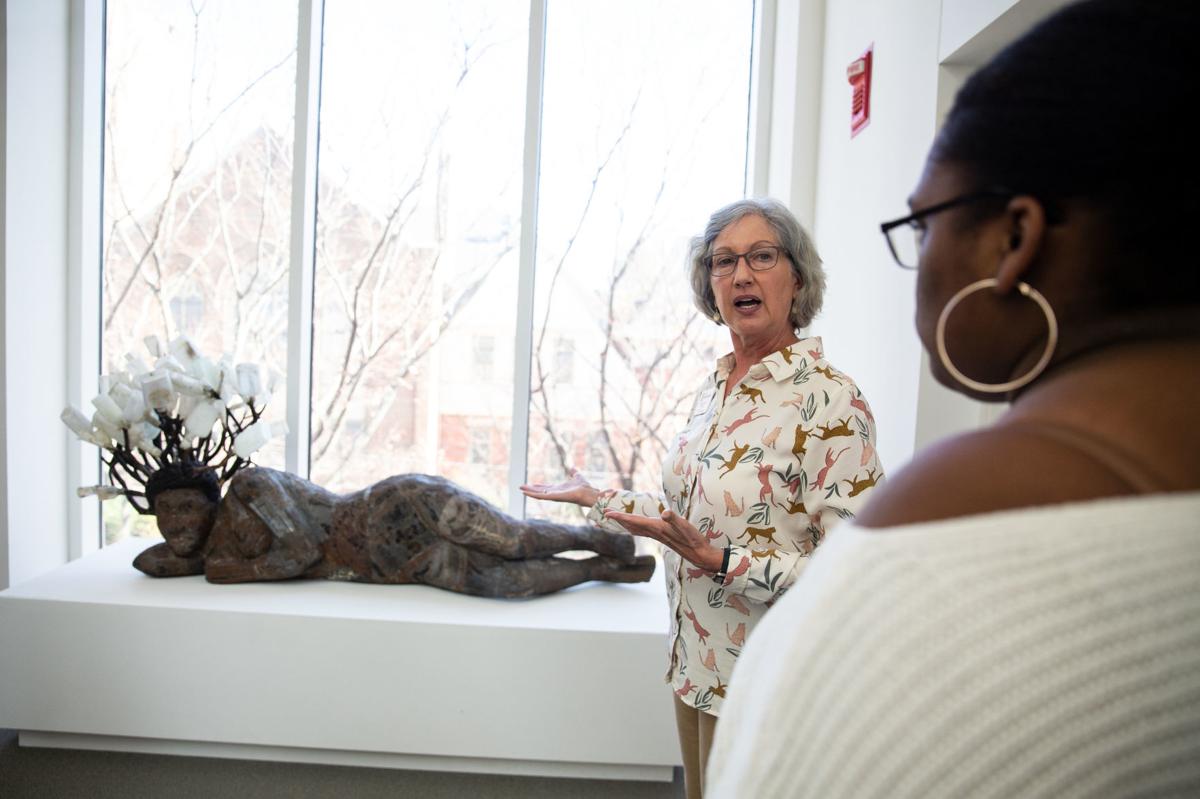 Molly Mullins talks about a piece of artwork by Alison Saar during a tour of the Weatherspoon Art Museum in Greensboro, N.C., on Tuesday, November 26, 2019.

Guests look at artwork by Alison Saar during a tour Nov. 26, 2019, of the Weatherspoon Art Museum on the campus of UNCG. Some of the museum’s earliest art pieces were created by women, a likely reflection of the university’s earlier existence as Woman’s College.

Hailey Paivanas looks at a piece of art by Alison Saar during a tour Nov. 26.

Kylie Legare (left) and Empress Williams looks at art by Alison Saar during a tour Nov. 26, 2019, of the Weatherspoon Art Museum in Greensboro.

“We are particularly a ladies’ powerhouse right now,” said Emily Stamey, the museum’s curator of exhibitions.

“It was a matter of picking shows that we thought made an interesting mix together and would resonate with different audiences,” Stamey said. “And it happened to be all women who have that work.”

It also reflects the Weatherspoon’s interest in acquiring and showing more works by women and other under-represented artists.

“We have made a concerted effort over the last decade to show the work of women artists and artists of color, not only to exhibit them but to collect them,” museum Director Nancy Doll said.

The Weatherspoon’s results surpass statistics reported in a recent national study of museums.

That survey of 26 top museums found that, despite their efforts to boost numbers, only 11% of art work acquired for their permanent collections between 2008 and 2018 was created by women.

The Weatherspoon was not part of the national study by Artnet, an art market information company, and “In Other Words,” an art market podcast and newsletter produced by Art Agency, Partners.

Among those participating were the Metropolitan Museum of Art, the Smithsonian American Art Museum and the Museum of Modern Art.

But Weatherspoon’s own statistics show a better record: Female artists produced 32% of the 625 works that the Weatherspoon acquired in the last decade, said Elaine Gustafson, curator of collections.

The national study offered explanations for the difference. Among them: greater name recognition for male artists and the bias of collectors who donate works.

The true measure of achievement for artists is not the number of solo and group exhibitions, but acquisitions, experts say.

The Weatherspoon’s purchases of art — which excludes donations — have done even better since 2016, Stamey said: 59% of purchases have been art by women, and 57% were created by artists of color.

“One of the measures you want to look at is, where do museums put their money?” Stamey said. “What did they elect to buy?”

That comes closer to the demographics of UNCG’s student body, which is about 67% female and 49% white, Stamey said.

“I think we’re spot on in terms of making sure that what we present reflects the people who are coming to see the work,” Stamey said.

From its inception in 1941, the museum has focused on building a permanent collection of modern and contemporary art that is now considered one of the best in the Southeast. Some of its earliest art pieces were created by women, a likely reflection of the university’s earlier existence as Woman’s College.

Among the most well-known female artists in its collection are Eva Hesse, Louise Nevelson, Cindy Sherman, Nancy Graves, Mickalene Thomas and Lee Lozano.

The museum purchased Alison Saar’s sculpture, “Compton Nocturne,” in 1999 for its permanent collection. It is on display.

Works by men still predominate. Of 6,175 pieces in its collection, 81% were created by men.

It takes money or donations and getting the right piece at the right price.

“We want to be inclusive,” Gustafson said, “but it’s not somebody’s ethnicity that really drives what we’re acquiring. It’s the strength of the work itself. If we can hopefully check off many boxes with an acquisition, we want to do that.”

The Weatherspoon considers other questions as well before acquiring a work, Stamey said: “What exhibitions do we see ourselves using it in? What teaching do we see it being engaged with here on campus?”

When Doll arrived more than 21 years ago, the museum had been frequented and supported mostly by white people, she said. Attendance was much smaller than it is now.

“I felt like my charge was to open it up to make it more accessible both to campus and the community,” she said.

She worked to diversify the art collected and displayed.

It wasn’t solely by women. In the past decade, the Weatherspoon also has presented shows by African American male artists Leonardo Drew and Trenton Doyle Hancock, as well as an exhibition of Latin and Latin American art.

The Weatherspoon buys most of its works from galleries that represent artists.

It also buys works directly from artists in its own exhibitions, such as Art on Paper. From current exhibitions, it will purchase a Saar print and a piece by Shotz.

“It shows that, if we were interested enough to show this artist, we are equally interested in having their work in the collection,” Doll said.

The number of donated art works varies annually, probably averaging 25 to 35, Doll said. Of the 72 donations this year, 45% were created by male artists, Gufstafson said.

“Do you turn away a gift just because it happens to be by a man and you’re trying to build collections by women?” Stamey said. “They are beautiful things, and they have been offered to you for free.”

A sampling of other North Carolina art museums shows that they have worked to diversify their exhibitions, or permanent collections if they have them.

The N.C. Museum of Art in Raleigh does not have statistics on the percentage of female artists represented in its collection, said Kat Harding, public relations manager. It was not part of the national study.

“We keep in mind the gaps in our collection, including under-represented artists, while acquiring new work,” Harding said. “We make a concerted effort to support and acquire more work by women.”

The museum founded the Matrons of the Arts movement, which has been used so far to acquire a bust by Harriet Hosmer, support its Georgia O’Keeffe exhibition in 2018 and fund a weekend of programming around International Women’s Day in 2019.

It currently displays the work of the late Mexican painters Frida Kahlo and her husband, Diego Rivera.

The Guilford College Art Gallery does not have a budget for acquisitions and does not buy works of art, Founding Director Terry Hammond said. All artwork in its collection comes from donations.

Hammond said she aims to present exhibitions that provide in-depth exposure to themes relevant to the college’s curriculum. She strives not only for gender equity, but racial and cultural diversity and to balance representation of artistic media as well.

Since 2016, the Guilford gallery’s exhibitions have included 11 solo shows by women artists.

It now displays “Twelve Places: Redux,” an exhibition of art by 12 women.

Hammond said that she notices women’s art being shown more regularly today than in decades past.

“I think progress has been made, but there is still a long way to go,” Hammond said when “Twelve Places: Redux” opened. “There are people who would argue that they still aren’t valued equally.”

The GreenHill gallery in the Greensboro Cultural Center does not maintain a collection or acquire art.

GreenHill offers exposure to artists who wind up in shows at other museums.

“They help put artists in a position where their work will be acquired at some point,” Stamey said.

At Weatherspoon, Doll has seen diversification of its collection and exhibitions pay off, helping to diversify the audience as well, she said.

Non-student attendance has grown steadily, reaching more than 38,000 annual visitors. Doll now estimates that 35 to 40% of museum visitors are people of color.

The Weatherspoon isn’t finished diversifying its exhibitions and collection, said Doll, who will retire next summer.

The three Greensboro arts organizations have received grants totaling $80,000 from the National Endowment for the Arts.

Woman charged in Dec. 28 wreck in Greensboro that led to death of motorcyclist