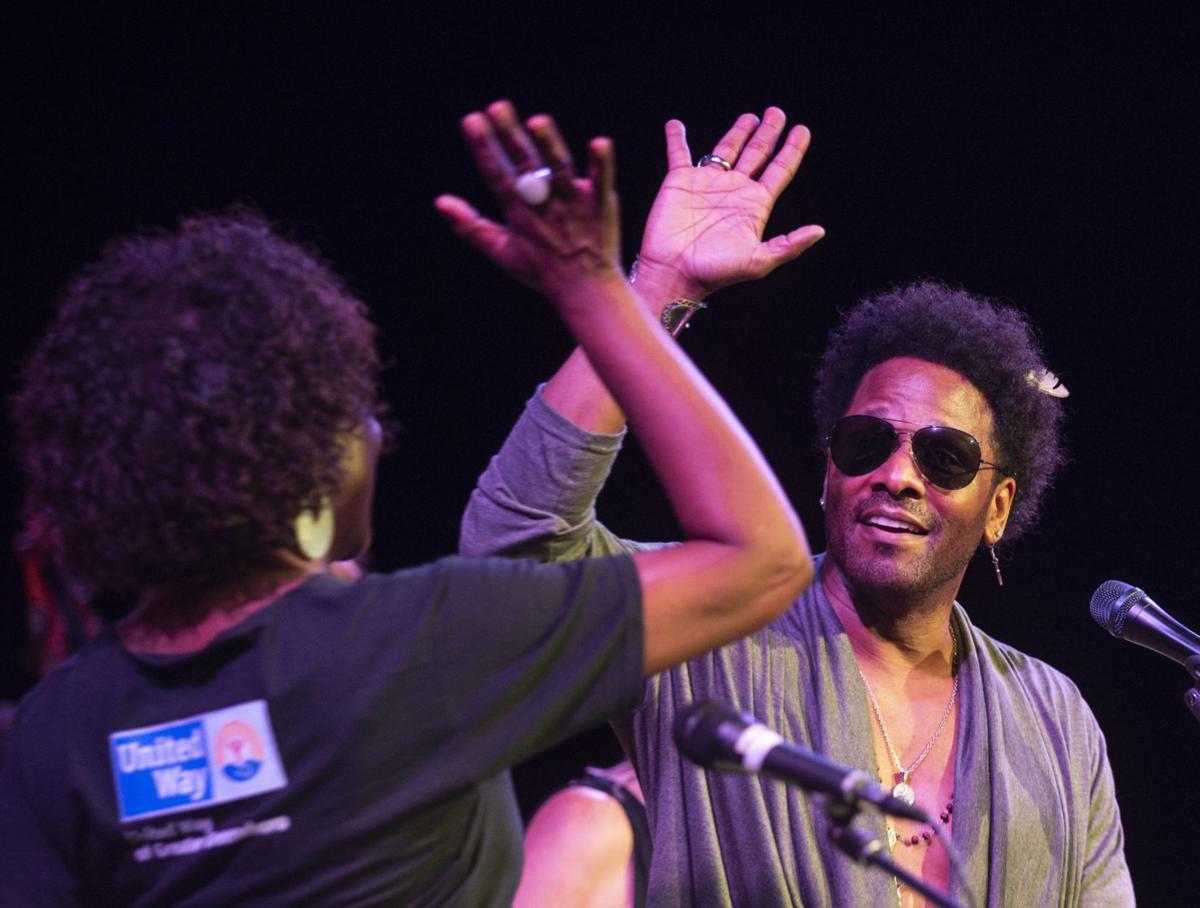 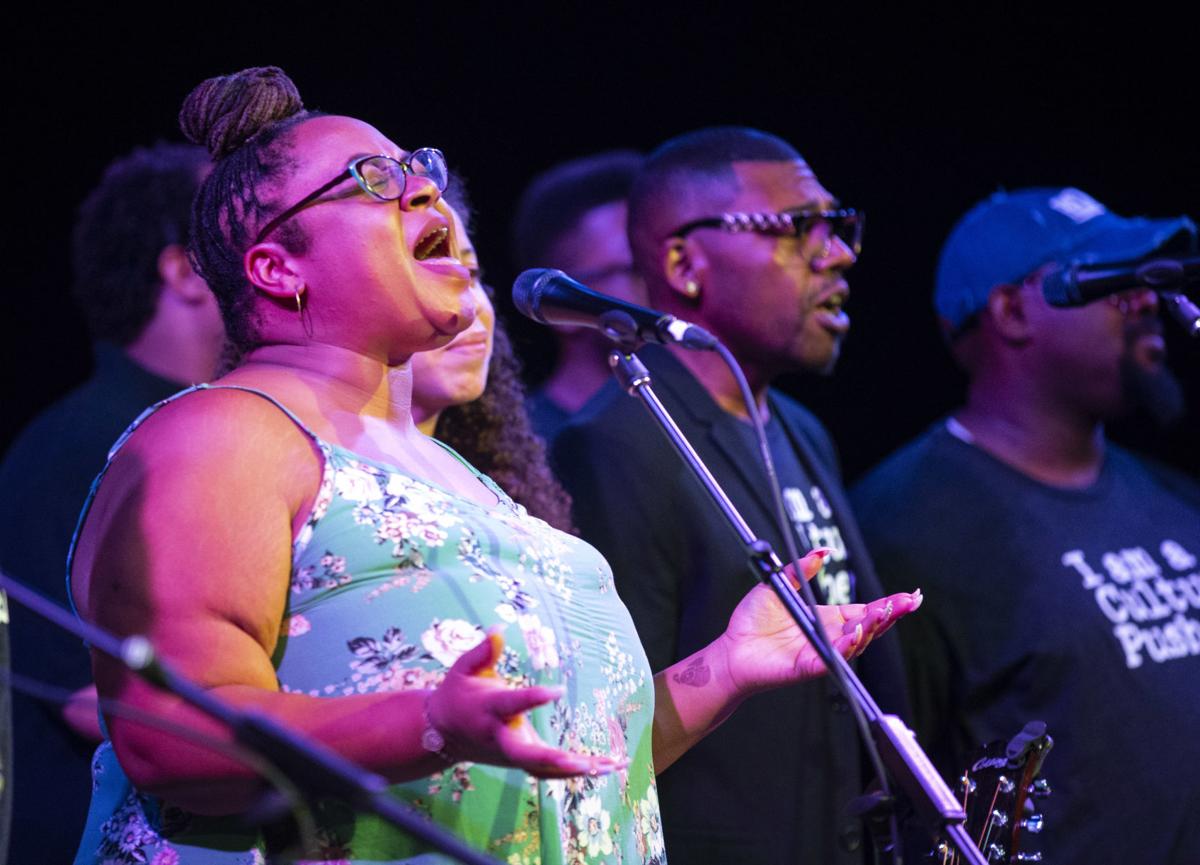 A choir opens the "Songs of Hope & Justice" concert with a song from the "Artist United to End Poverty" album at the Van Dyke Performance Space in the Greensboro Cultural Center in Greensboro, N.C., on Thursday, Sept. 5, 2019. The concert focused on themes of freedom and social justice and starts the annual North Carolina Folk Festival weekend. 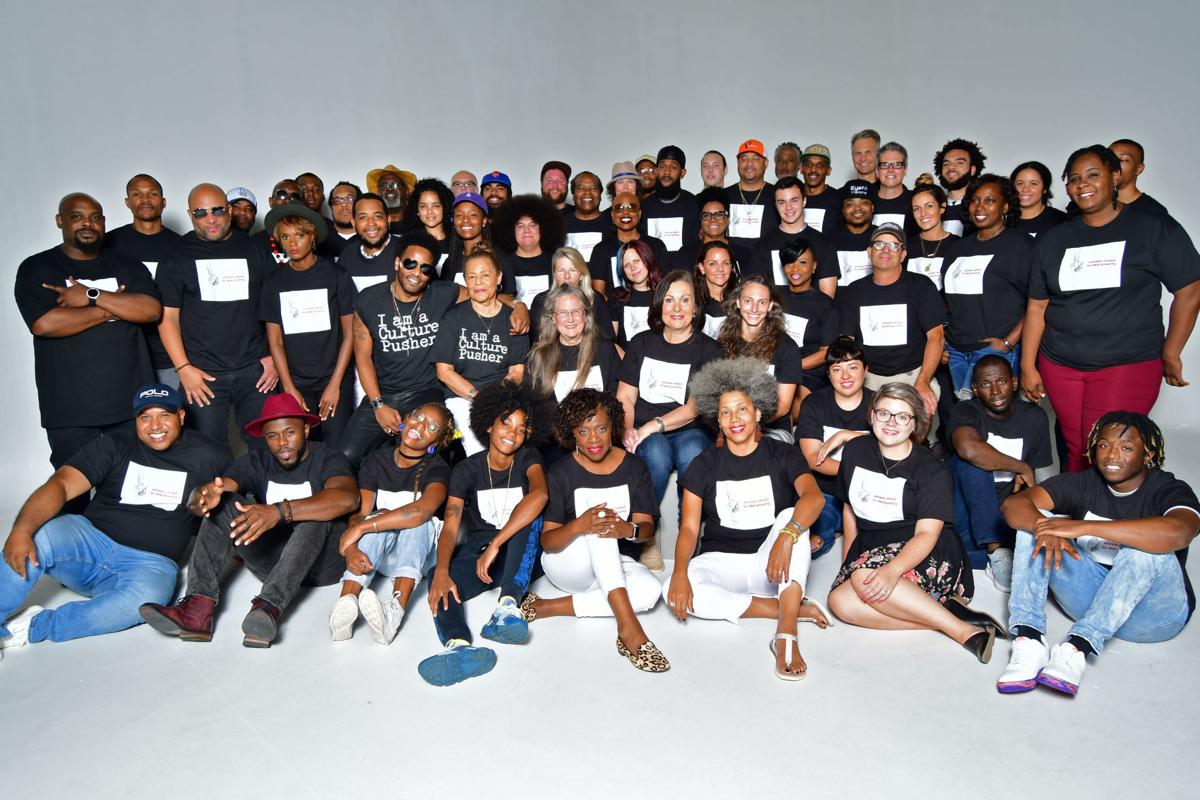 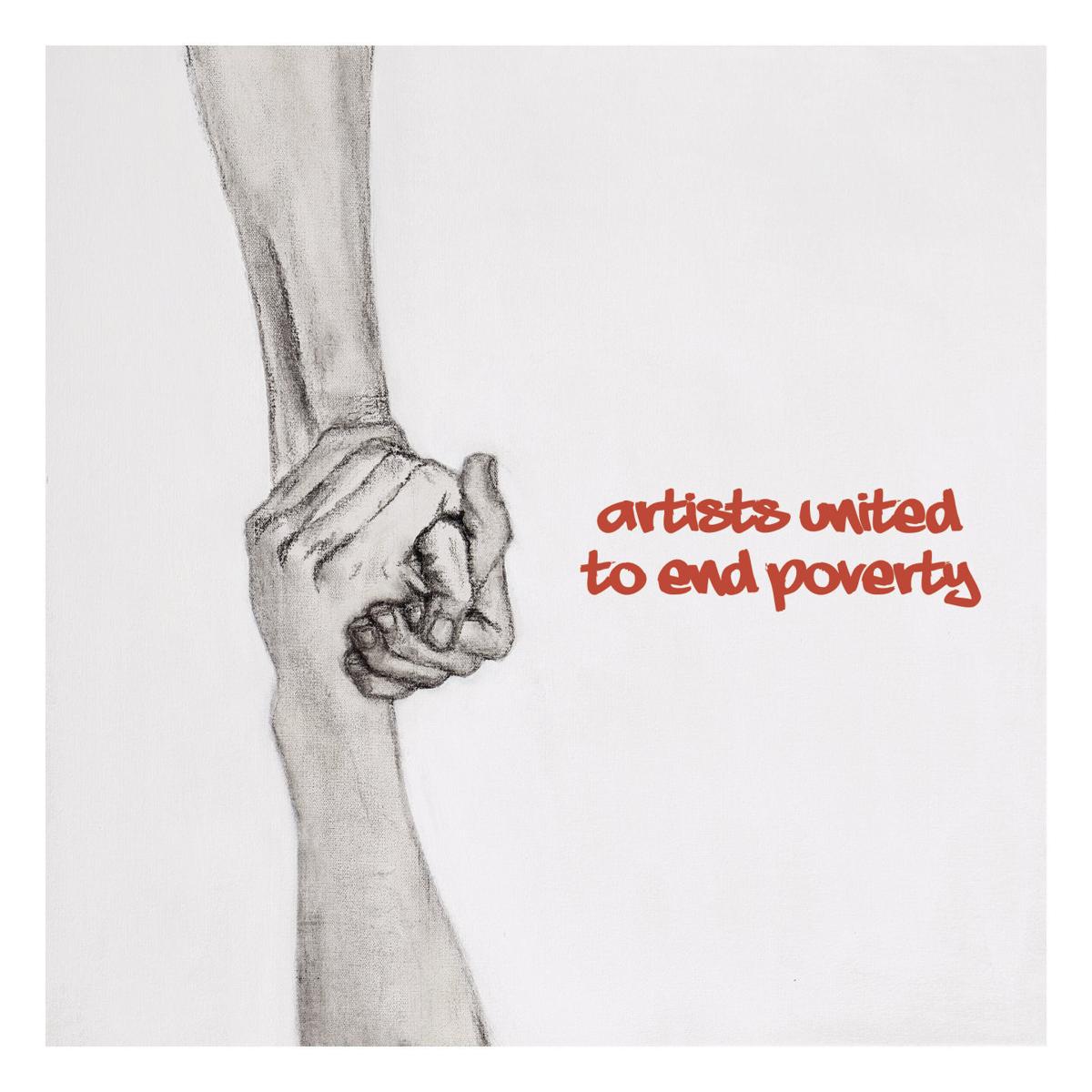 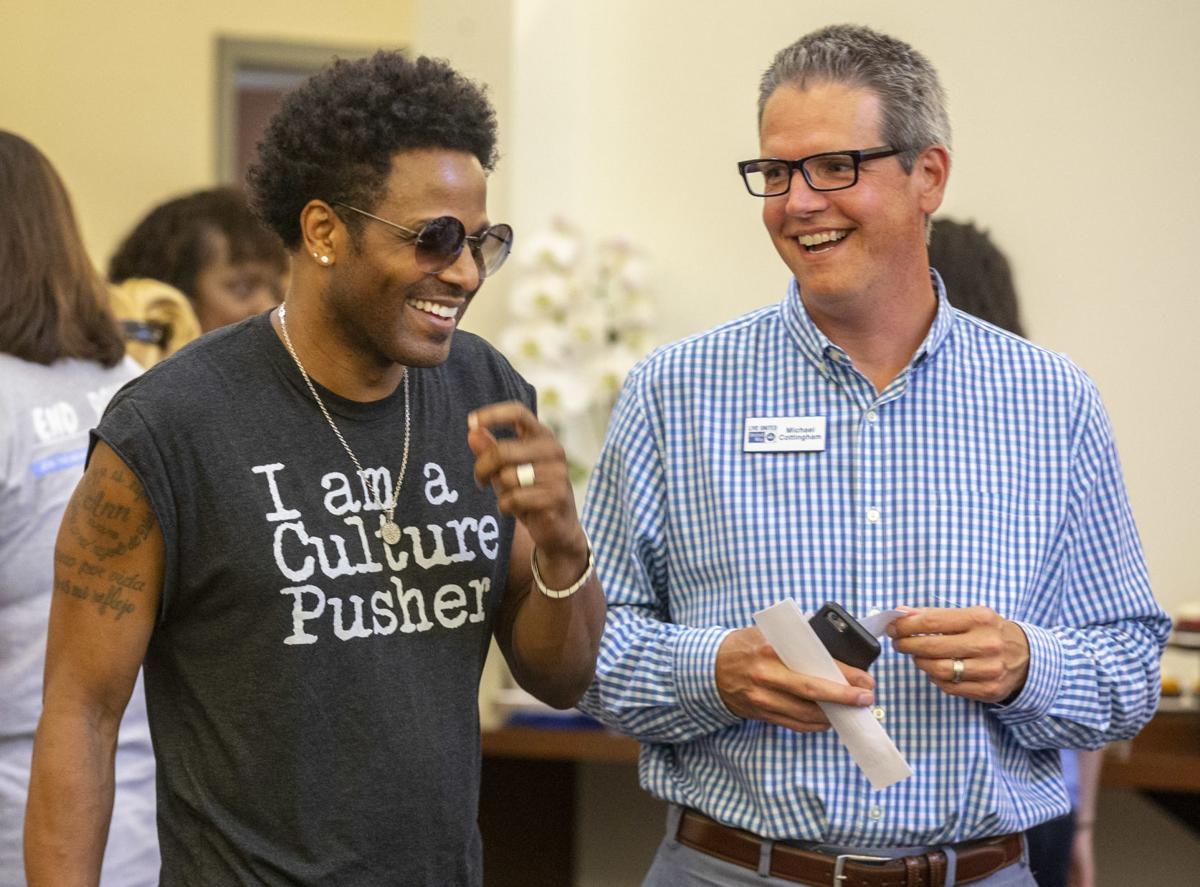 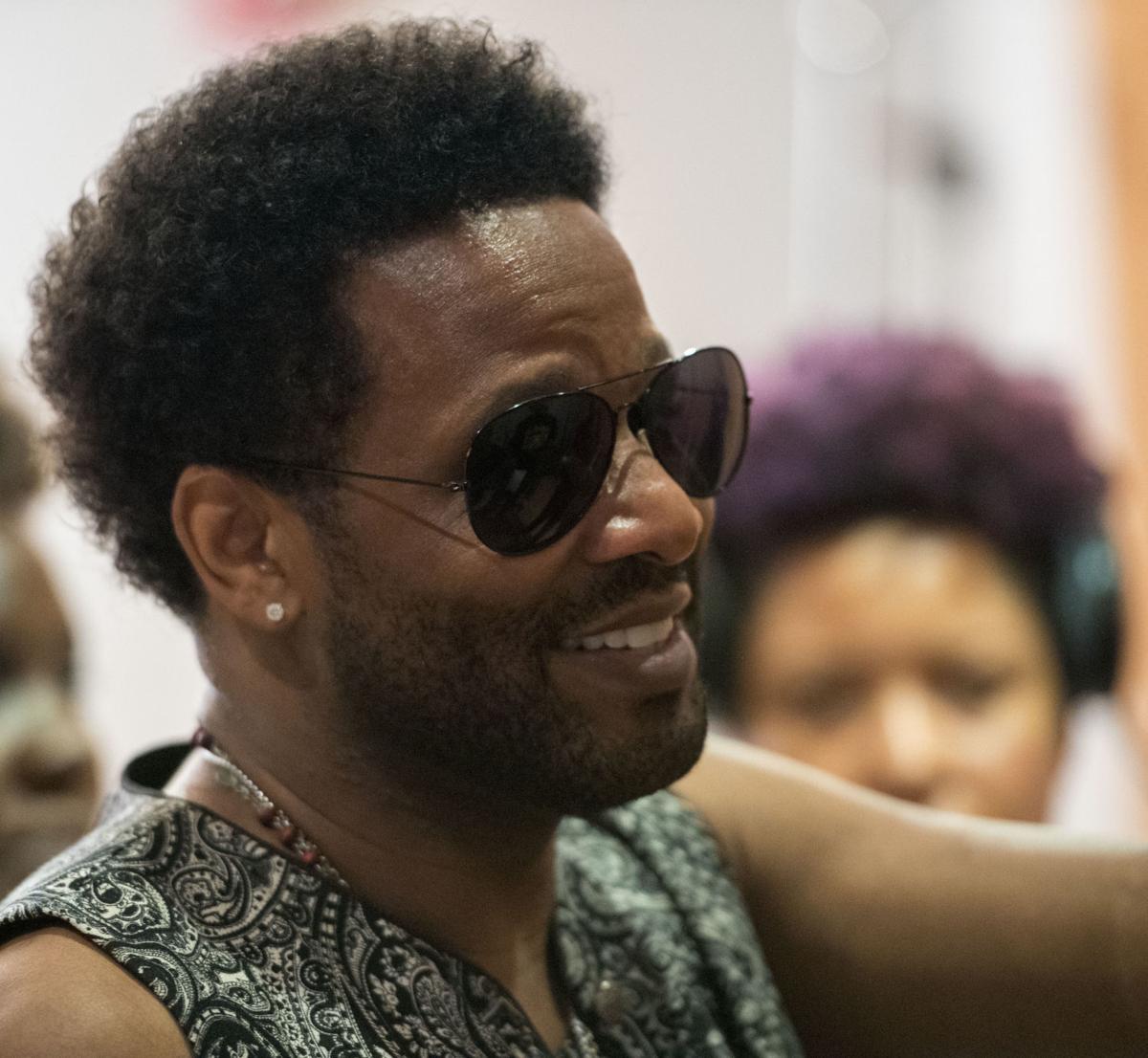 A choir opens the "Songs of Hope & Justice" concert with a song from the "Artist United to End Poverty" album at the Van Dyke Performance Space in the Greensboro Cultural Center in Greensboro, N.C., on Thursday, Sept. 5, 2019. The concert focused on themes of freedom and social justice and starts the annual North Carolina Folk Festival weekend.

GREENSBORO — More than a year in the making, an album recorded by local musicians has been released to benefit United Way efforts to fight poverty.

All sale proceeds will go to United Way of Greater Greensboro to help end local poverty.

They opened the “Songs for Hope & Justice” concert that helped to launch this weekend’s N.C. Folk Festival.

Written by Heard and Hickory artist Andre Fenix, “Die 4 Love” is in the vein of “We Are the World,” the 1985 song recorded by superstar musicians that raised millions of dollars for humanitarian aid in Africa and the United States.

It features 51 tracks: songs in a variety of genres, interspersed with interludes of spoken word and music.

A public party tonight at the Elm Street Lounge will celebrate the album’s release.

Credit the idea to Heard, a Grammy Award-winning music producer. Heard, who founded the local nonprofit The Culture Pushers, partnered with United Way to produce the album.

He brought together talented local artists, community leaders, activists and people in poverty to record the tracks.

“I felt compelled to get involved because I know the power of music and how it can help address social issues that exist in the community,” Heard said in a news release.

There is talk of a deluxe edition on CD and vinyl for Christmas.

The album features original material in genres such as country, gospel, pop, R&B and hip-hop. Artists donated their songs, but will retain publishing rights.

Presenting “Die 4 Love” on the album is a group that includes Mayor Nancy Vaughan, gospel artist John P. Kee, The Hamiltones, and the Rev. Bryan Pierce and the gospel choir at his Mount Zion Baptist Church.

Among those singing on the album are Greensboro native Shelby Johnson, better known as Shelby J., who toured for years with Prince; Sybil Lynch Newman, who goes by Sybil, an R&B and pop recording artist who graduated from N.C. A&T, and singer/songwriters Laurelyn Dossett and Vanessa Ferguson, a finalist on the NBC singing competition “The Voice” in 2017.

Those recording interludes between songs included Josephus Thompson III, a spoken-word artist, educator and entertainer, as well as community activists and people affected by poverty.

Heard said he hopes to sell enough albums to put “a huge dent” in the poverty that plagues the city.

In Greensboro, nearly 20% of the population lives below the federal poverty threshold, which is $25,750 for a family of four. One in four children live in poverty.

Heard said he also hopes that “we all gain a better understanding of the multiple aspects of poverty and that it directly and indirectly affects us all. Many of us are living in poverty and don’t even realize it, especially music and visual artists.”

He wants record labels and publishing companies to learn about talented local unsigned artists, he said, “and offer deals and situations so we can create industry and artists won’t feel compelled to move to New York, Los Angeles or Atlanta to have a sustainable career in music.”

What: Release party for Artists United to End Poverty album. Artists from the album will perform throughout the event.

Admission: Free. Party-goers are asked to buy the album to show support.

Go online to culturepushers.org/album for more information and instructions on downloading the album.

Instagram (be sure to paste www.culturepushers.org/album in your bio):

Tap the link in bio to buy #ArtistsUnitedToEndPoverty, a 50-plus song album featuring top local talent. Proceeds will benefit @UnitedWayGSO efforts to #EndPoveryGSO.

Is proposed pipeline through Triad in trouble?

Part of S. Main St. in High Point will be closed in both directions during day on Tuesday, DOT says