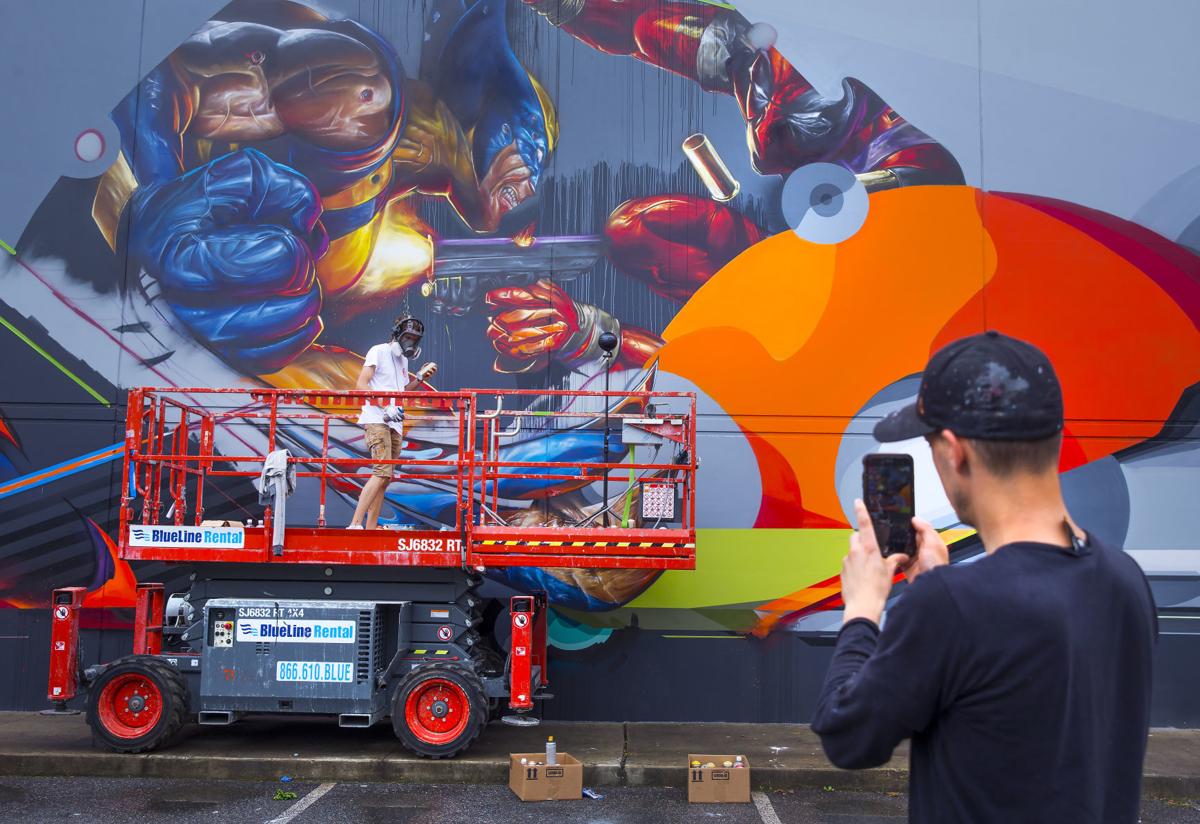 Mural artist “Does” records video of artist Matt Adnate at work at Red Cinemas in Greensboro on Wednesday. 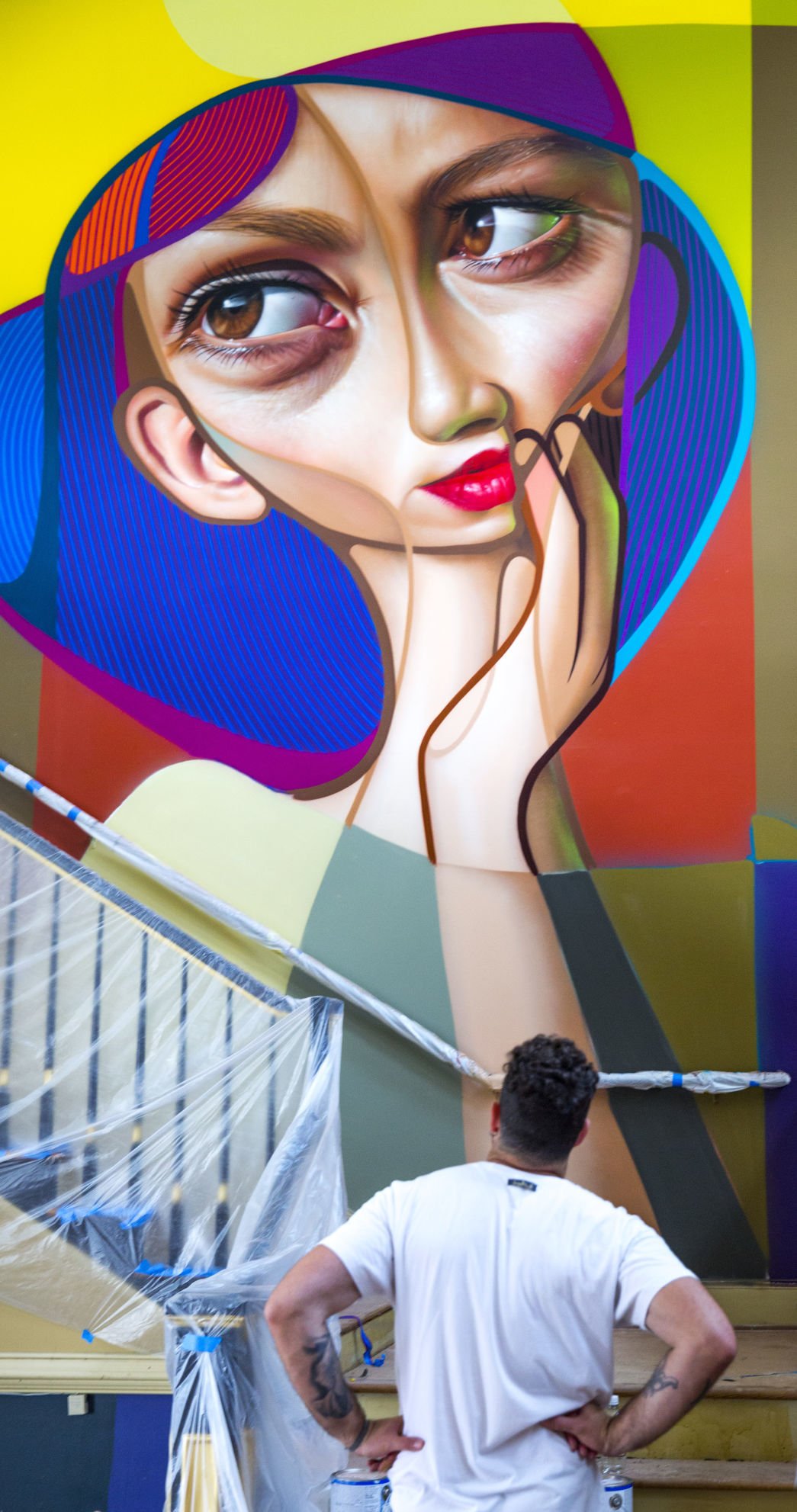 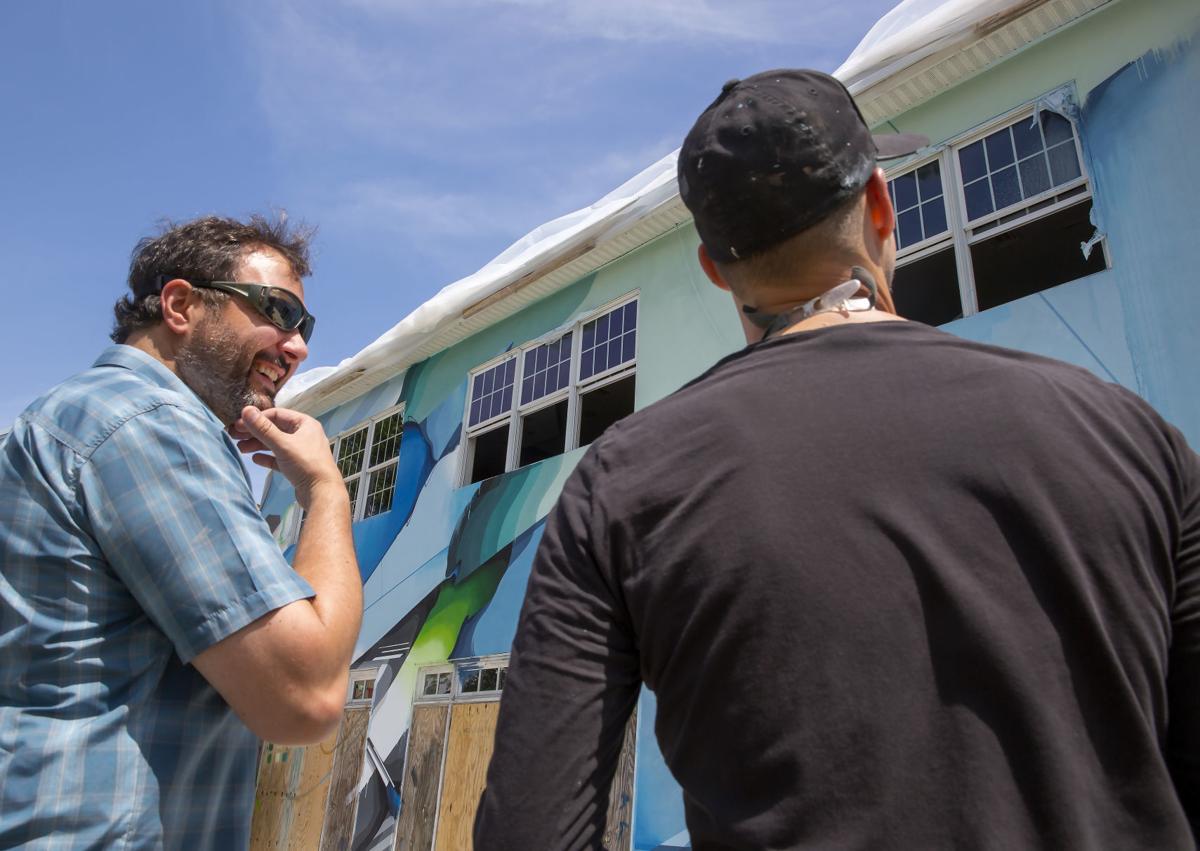 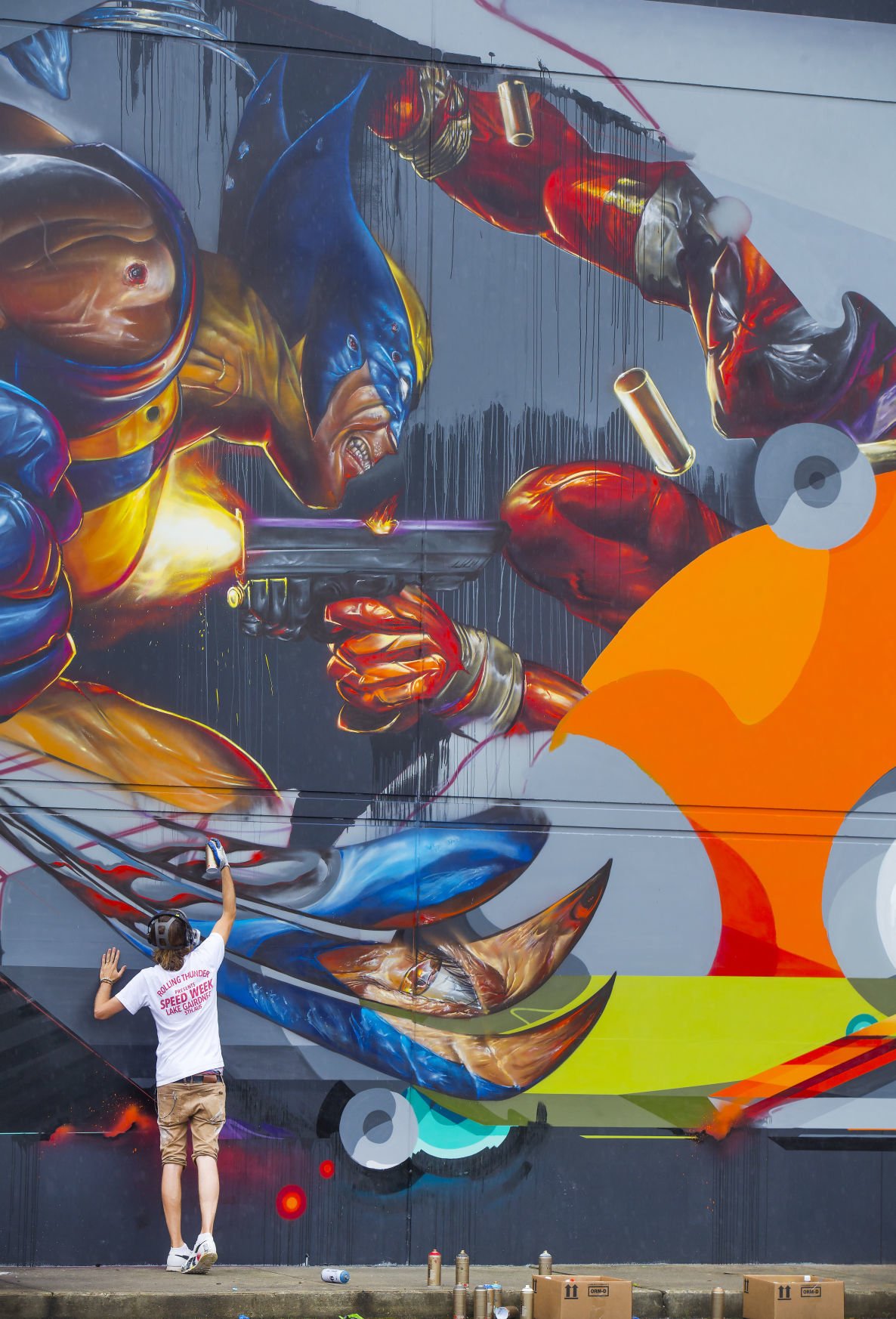 Mural artist Matt Adnate works on comic book characters on wall of Red Cinema in Greensboro, NC on May 29, 2018. 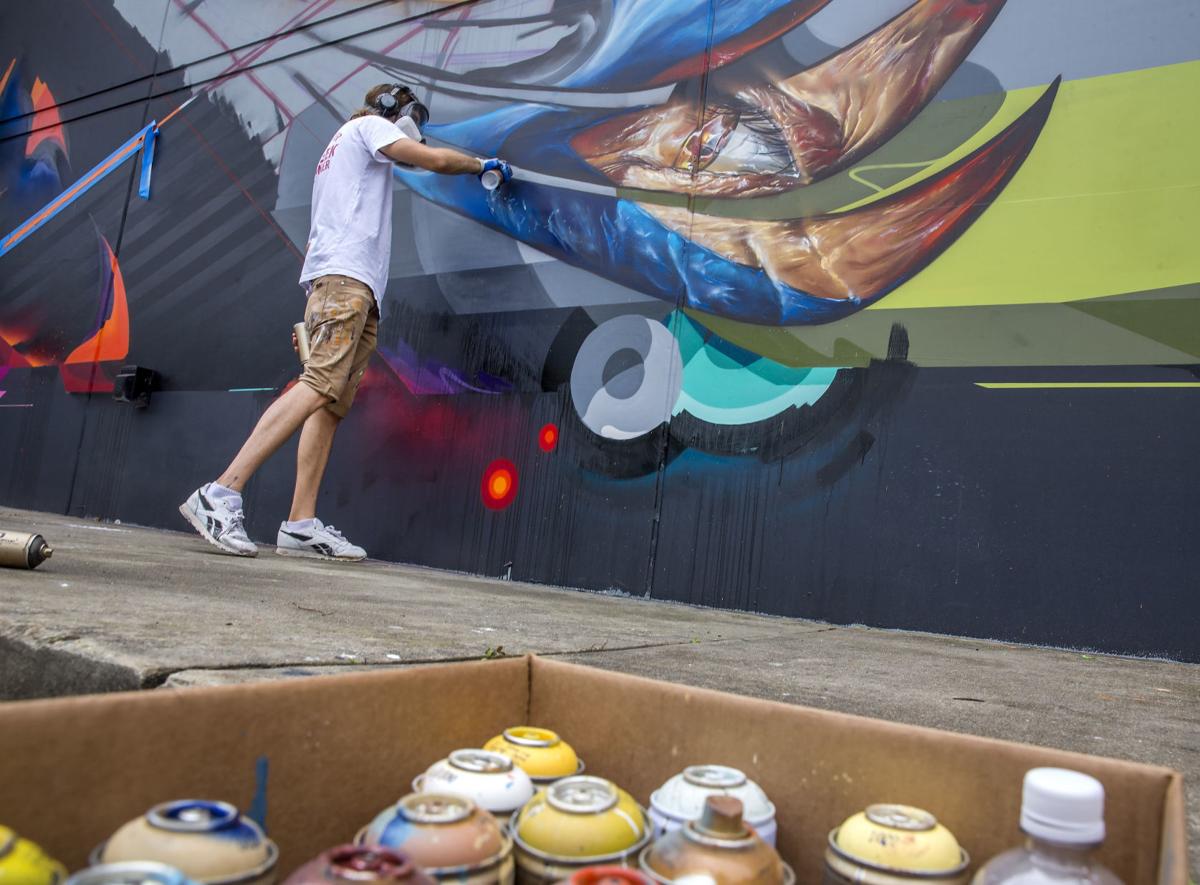 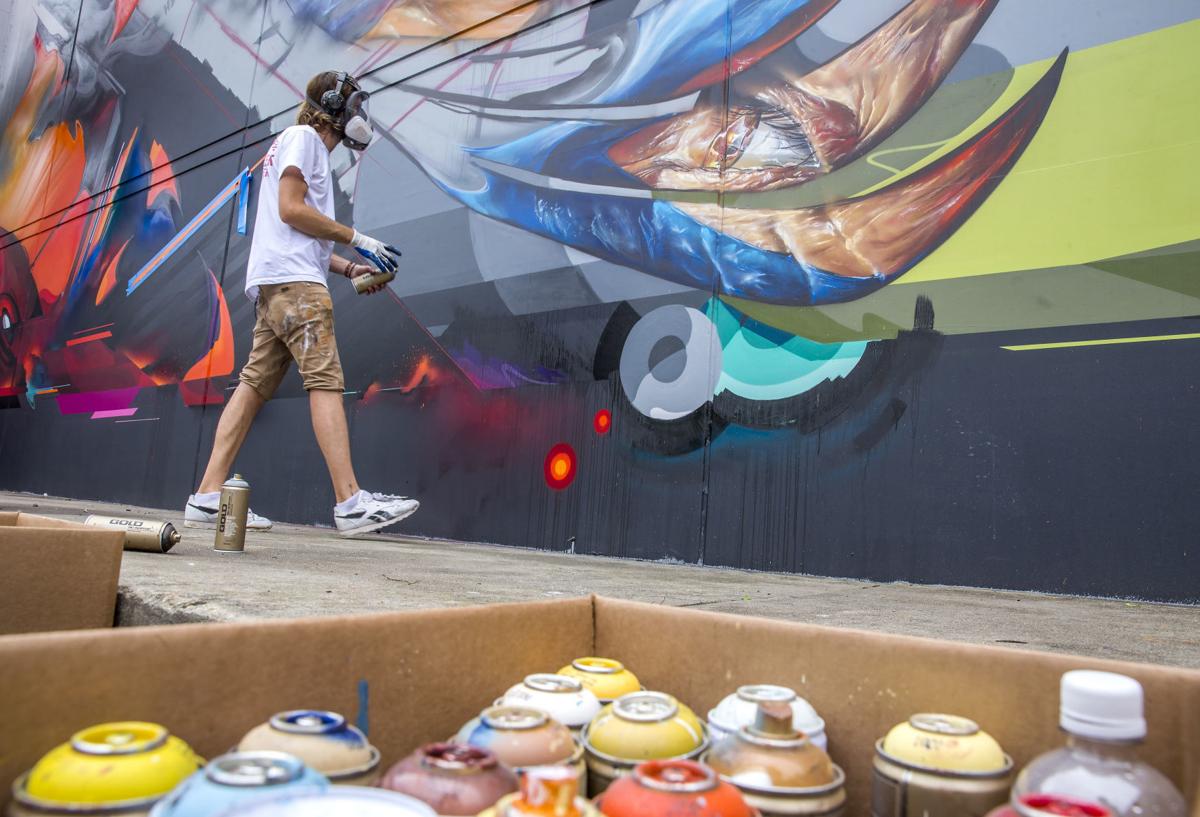 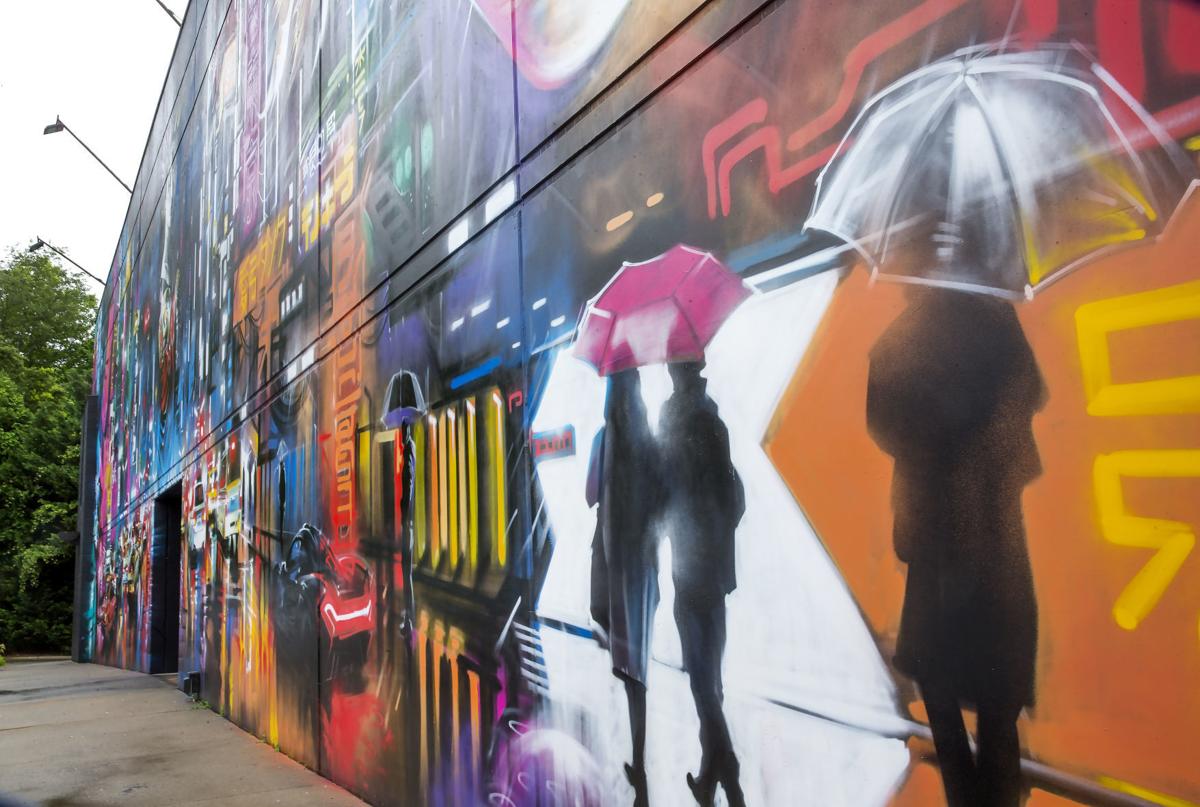 Mural artist “Does” records video of artist Matt Adnate at work at Red Cinemas in Greensboro on Wednesday.

Mural artist Matt Adnate works on comic book characters on wall of Red Cinema in Greensboro, NC on May 29, 2018.

Nearby, the mutant Wolverine and antihero Deadpool engage in combat.

This is no movie poster.

The artists used fast-drying acrylic paint in spray cans and on rollers. So the days of rain didn’t slow them down, except during a few downpours.

They finished it in five 12-hour days, in time to show it off at a Wednesday night reception for city leaders and art advocates.

The mural has attracted attention beyond passing motorists.

When Belin posted a photo of his Wonder Woman on the online photo-sharing site Instagram, it quickly gained over 10,000 likes and nearly 300 comments.

Fans have driven from other cities and Virginia to see their work.

“It’s bringing a lot of attention to Greensboro through social media,” Kotis said.

In the last three years, Kotis has commissioned more than 40 murals for his properties — most in Midtown, downtown and the Tracks Bazaar and Tracks Beer Garden on West Gate City Boulevard and South Eugene Street.

Many lie along the developing Atlantic & Yadkin Greenway.

Kotis developed his interest in street art on visits to Berlin and the United Kingdom. He since has brought in top artists, both local and international, to realize his vision here.

“If I think a wall looks ugly, it’s either going to get very interesting decorative brick on it, or it’s going to get a mural on it,” he said.

They reflect his desire to turn the city into a street art destination that will retain millennials and make the city cooler.

“It’s almost like being an art collector, but instead of the paintings hanging in my house, they’re hanging on my buildings,” Kotis said.

Before the artists applied their talents to Red Cinemas, Does and Belin painted murals last week on the former Ham’s Lakeside at 699 E. Cone Blvd. Kotis bought the building last year, and plans to open it as a Darryl’s Wood Fired Grill between November and March 2019.

Does, who came from The Netherlands, painted an abstract mural on the 120-foot synthetic stucco wall that overlooks the rear patio. He used shades of blue and green, reflecting its location on Buffalo Lake. Deliberate drips of paint add to the water effect.

Although it’s not quite so visible now to homes across the lake, it will be after leaves fall.

“Marty asked me to choose a design that blends with the environment,” Does said as he took a brief break off the hydraulic lift that took him to the second story.

The Spanish artist Belin, 38, is internationally known for his spray skills. On a two-story interior wall, he depicted the face of a female in a style he calls Post Neo Cubism.

The influence of another Spanish artist, Pablo Picasso, is apparent.

“I love the realism, but with the combination of Cubism and graffiti,” Belin said.

When working with a paint brush, the action is in the wrist. With a spray can, Belin said, “You need to move the whole body.”

For Does and Belin, this marks their first art in the city.

Adnate, who hails from Australia, has created here before.

At 33, he has become internationally known for his soulful, spray-painted murals of Australia’s indigenous Aborigines and Tibetan refugees.

When Kotis thought of artists to bring to the city, Adnate topped his list.

In August, he and his wife, artist Jessica Crema, painted murals of Lumbee Indians in full regalia on two Kotis buildings. One is a few doors down from Red Cinemas on the Midtown Financial Advisors building. The other covers a concrete wall in the Tracks Bazaar and Tracks Beer Garden.

Adnate helped recruit Does and Belin to Greensboro.

Does, 36, played professional soccer until knee injuries ended his athletic career at age 28.

So he turned his longtime sideline work in art into a career.

”It was more like a relief to me to have something next to my strict life in soccer,” he said of doing both simultaneously. “I needed to be more relaxed.”

Long focused on graffiti-style pieces, Does has moved into more figurative and abstract work. He incorporates traditional letterform with D, O, E and S hidden in his art.

The Darryl’s mural is his second-largest project, topped only by painting mural art in two long German train tunnels.

He sketched the Darryl’s mural first by hand on paper, then filled it in using Photoshop.

He also created the design for the north-facing wall of Red Cinemas, the third mural decorating the theater complex exterior.

In October, British artist Dan Kitchener — known as “DANK” in the street art world — created a “Blade Runner”-inspired mural on the south-facing wall of Red Cinemas.

When Kotis asked Adnate to suggest collaborating artists for the 110-foot north wall, Adnate thought of Does and Belin.

Belin wanted to paint Wonder Woman. Adnate would depict Wolverine and Deadpool in the comic-book style that inspired him as a child.

Does created the overall layout and completed the abstract background. It would take as many days to create the design as it would to paint it.

“He is a master at composition,” Adnate said of Does.

For both the Darryl’s and Red Cinemas projects, Kotis ordered more than 1,000 cans of spray paint, as well as paint for the rollers.

Does likes the result.

“Everyone still showed his craft and it’s still one piece instead of all separate parts,” Does said. “The way the colors work together and the realistic parts and the graphic parts are really balanced.”

And yes, Does’ white drips are deliberate.

Kotis praises the work of each artist.

“I don’t think I have ever seen anything that good in photo-realism,” Kotis said of Belin’s Wonder Woman.

“Does is so precise in his gradients and his fade and his explosions and everything else,” Kotis added.

“Adnate was at the top of my list,” Kotis said. “It’s neat to see him do something different.”

Kotis has quite an encore planned for Adnate and Luxembourg graffiti artist Eric Mangen.

Next week, they will paint a Kotis-owned, two-story office building at 1205 W. Bessemer Ave. with street art.

They will use a fire engine and eight fire extinguishers to spray it.

Before they get started, the building and parking lot will be primed in purple.

“I imagine I will get a whole lot of phone calls when they put that first coat on there, because it will be shockingly purple,” Kotis said.

Kotis bought a fire engine at a government auction. Artists will fill it with a mixture of paint and water.

“I don’t think anyone in the world has ever filled a fire truck full of paint,” Adnate said.

Check out this #StreetArt on the side of our building!@REDCinemas pic.twitter.com/pVM5VpWLFc

The new face of downtown