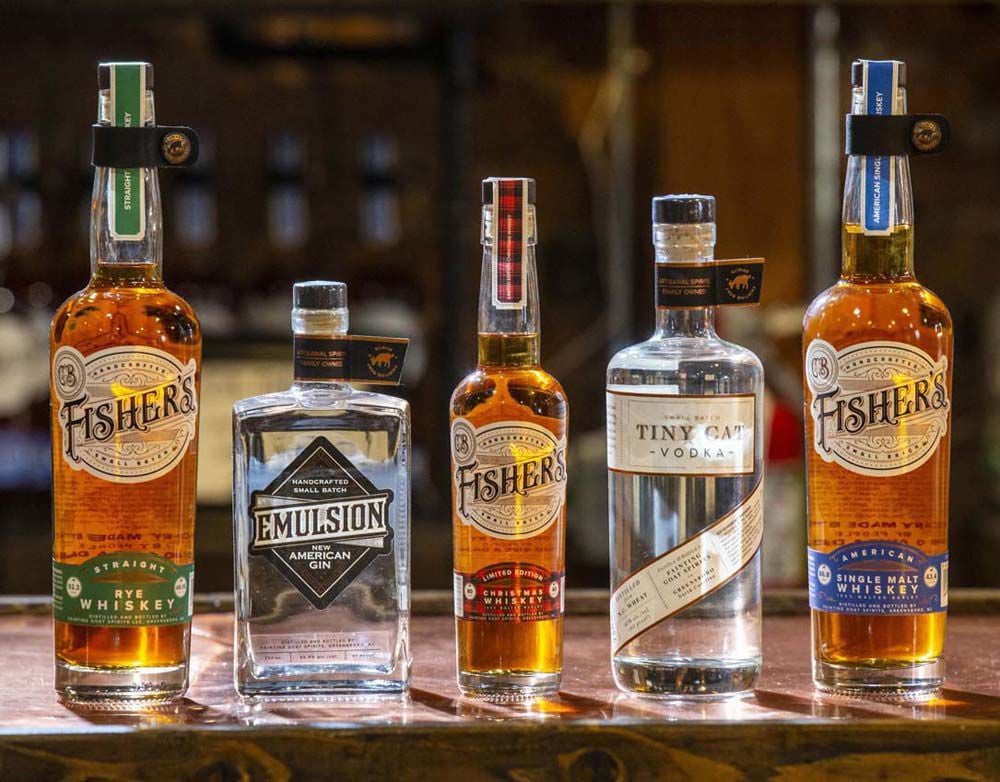 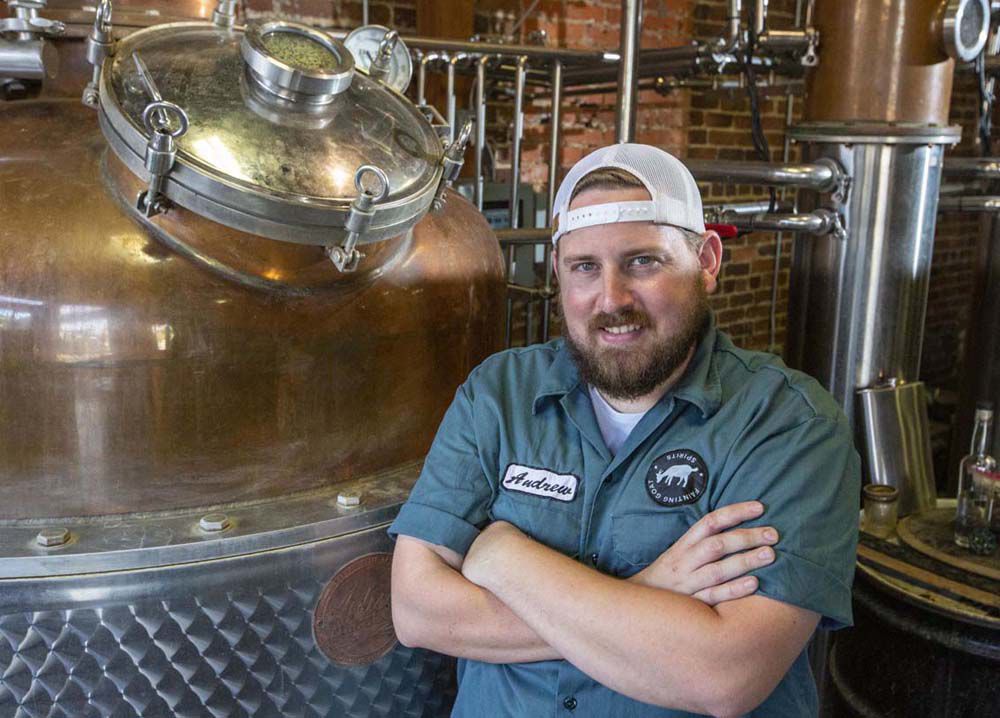 Co-owner and distiller Andrew Norman takes pride in the products he and his family make at Fainting Goat Spirits. Norman is especially fond of the Christmas Whiskey and C.B. Fisher's Straight Rye Whiskey. 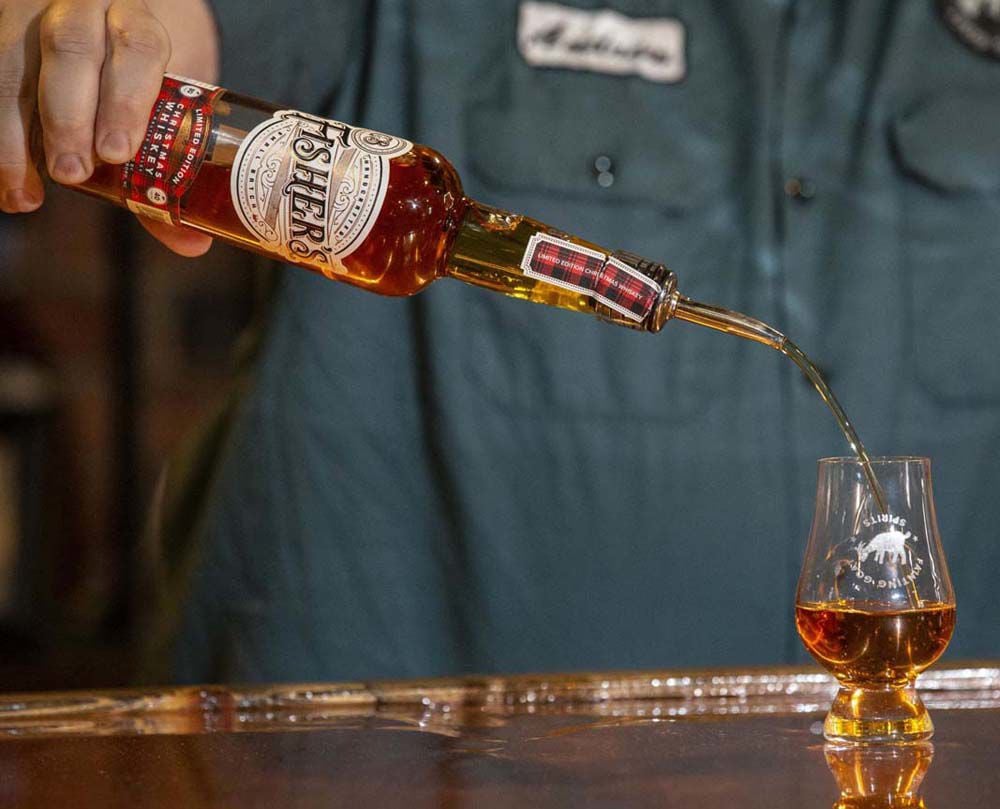 The Christmas Whiskey at Fainting Goat Spirits has become one of their most popular spirits. This year, the release party is schedule for Nov. 1.

Co-owner and distiller Andrew Norman takes pride in the products he and his family make at Fainting Goat Spirits. Norman is especially fond of the Christmas Whiskey and C.B. Fisher's Straight Rye Whiskey.

The Christmas Whiskey at Fainting Goat Spirits has become one of their most popular spirits. This year, the release party is schedule for Nov. 1.

This time last year, distiller Andrew Norman had more to celebrate than most during the holidays.

“We put out my favorite whiskey to date, our rye whiskey, a week before Christmas,” he says. “A week after Christmas, I got married on New Year’s Eve.”

The former mortgage banker takes a lot of pride in the products his and his family’s company puts out. Fainting Goat Spirits, Greensboro’s only distillery, has been making national award–winning clear and aged liquors since 2016.

The social lubricants play a big part in their own family gatherings, too.

“It’s something you can share, like food,” Norman says. “Nothing means more to me in life than sitting around [and talking] with friends and family.”

Get the conversation started at your family gatherings this season with some of Fainting Goat Spirits’ products, which are widely available at area ABC stores and at the distillery itself. (And thanks to a recent law change, you can buy as many bottles as you’d like there.)

The first liquor Norman worked on, and one of their most popular spirits, is Tiny Cat vodka. It’s actually named after him — at least, “tiny cat” was his family nickname growing up.

Like the other liquors Norman makes, Tiny Cat vodka went on to win several awards, including silver at the prestigious San Francisco World Spirits Competition in 2017.

“It’s the world’s largest spirits competition,” he says. “That’s the one we enter every year when we have product because that’s the one all the big boys do.”

It may very well be the smoothest vodka you’ll ever try, so if you aren’t normally a vodka drinker, give this one a chance.

One of the first things you’ll notice about Emulsion gin is that it doesn’t taste like gin.

Although Emulsion uses the standard juniper berries among its botanicals, it has a lot of spices that aren’t common — like cardamom, a spice often used in East Indian dishes.

“The recipe took about three years, just playing around with it,” says Norman, who spent many weekends at a local spice shop dialing in the ingredients.

Emulsion brought in a slew of awards, including gold at the San Francisco World Spirits Competition in 2017. The unique flavor makes it great for sipping neat or on the rocks, or for mixing in cocktails.

Norman spends a lot of time now working on whiskies, with a whole line under the C.B. Fisher’s name.

“Captain Basil Fisher was a Greensboro resident in the 1800s,” he says. “He moved down here to open up a gold mine. When he left, he donated a plot of land to the city, and they turned it into Fisher Park.”

Norman’s family has ties with the neighborhood of the same name, so “it fit well with our family backstory.”

The single malt whiskey is made with 100% malted barley, rather than a mixture of grains, and has a distinct aroma and flavor due to the 16-month aging process.

Most know rye whiskey as the spirit that packs a punch.

“Straight” means it’s been aged for two years, “and it’s the second-ever straight whiskey distilled in N.C.,” he says.

The newest Fainting Goat Spirits product has gotten a lot of traction in the spirits world, having won gold at the San Francisco World Spirits Competition earlier this year.

“It’s our favorite product we’ve put out,” Norman says. “Pick a day of the week, [and] it’s gonna be one of those two [C.B. Fisher’s Straight Rye Whiskey or C.B. Fisher’s Christmas Whiskey] in our hands.”

“Back before we were doing this, I would always make a small Christmas batch, just buy whiskey and spice that,” he says.

This year’s Christmas Whiskey, which will be released on November 1, uses a two-year single malt, which “adds a little more depth” than the 16-month single malt used last year. The base recipe is the same; it’s infused with spices associated with the holidays — cinnamon, nutmeg, cloves, allspice — as well as ginger and orange peel. And at $19.95 for a half-size (375-milliliter) bottle, it’s a popular gift for whiskey lovers.

Norman, a self-described “cocktail nerd,” says, “The Christmas Whiskey is fun to play around with because it fits so well with holiday drinks — apple cider, eggnog, everything like that.”

His number one advice for cocktails?

“Use fresh-squeezed juice. It’s small effort, but makes a world of difference.”

Pour whiskey and cider into a glass with ice. Top with ginger beer.

Add all ingredients to a shaker with ice, and shake hard. Strain into an ice-filled glass, and garnish with fresh nutmeg.

Sign up for the newsletter on their website, where the Normans send out recipes and updates regularly.

Kat Bodrie is the editor of 1808: Greensboro’s Monthly and special sections at BH Media Group. Originally from Statesville, she loves the unique character of the people and places in the Triad. Find her on Facebook or katbodrie.com.